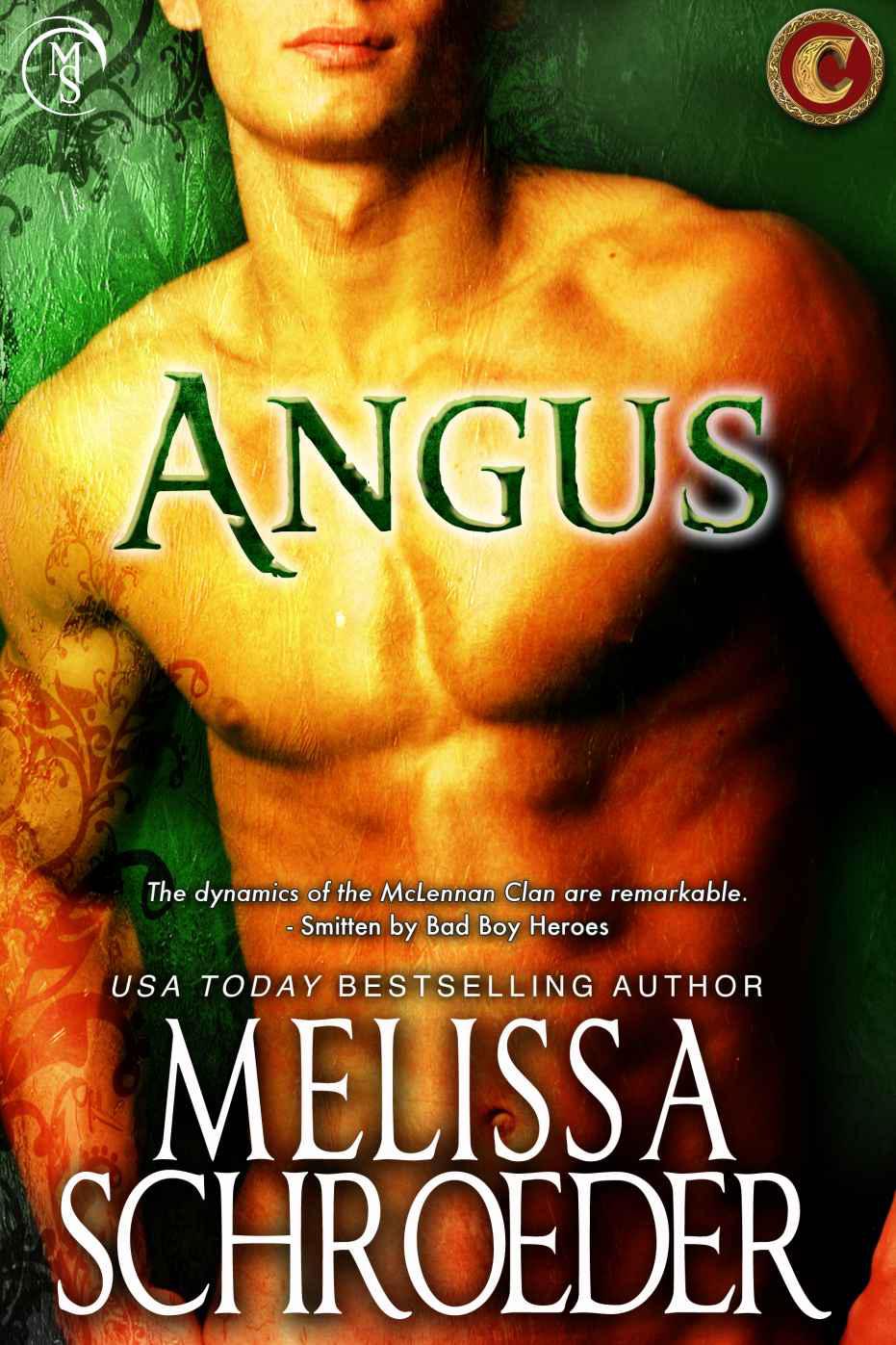 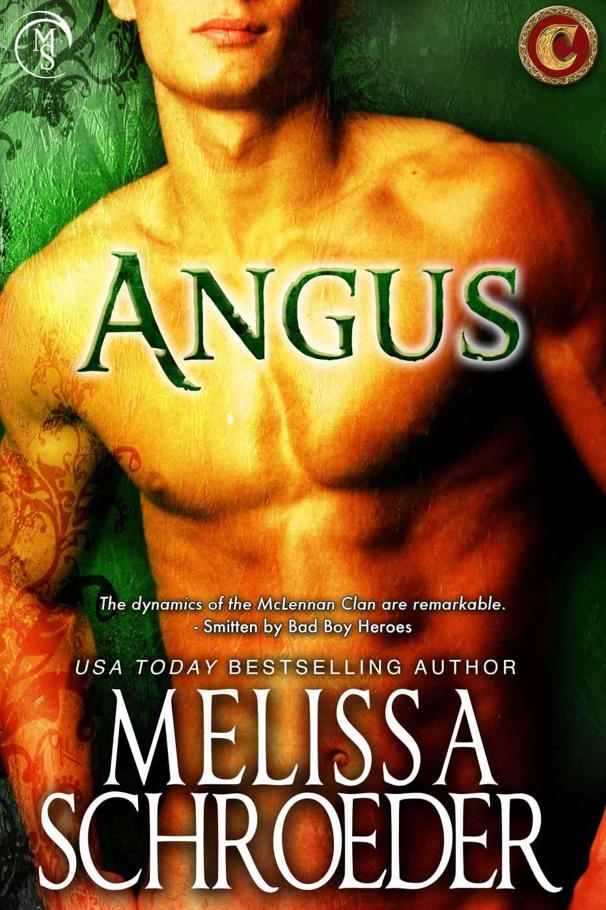 A man who only believes in fact.

Even after everything the Clan has endured, Angus has always held onto his scientific leanings. He isn’t a believer of instant attraction,  so, he is surprised by the force of his attraction to Irishwoman Maggie O’Conner. He doesn’t trust her, but she soon become an obsession he can’t seem to shake.

A woman who defies every logic.

Single mother Maggie comes from a long line of magickal women, but she walked away from that part of her life. When Angus bursts into her life, she tries to ignore the handsome Scot, but soon finds that she needs his protection. She knows he’s not normal, but she never expected him to be the one man who could capture her heart.

A passion they could not deny.

As they work together, their need for each other threatens to consume them both. But just as they close in on the next jewel, a new enemy emerges and puts everything they hold dear into jeopardy.

Once again to Les who is the man behind the crazy. Thanks for always believing—even if you don’t think I need a house with an elevator, a second story pool slide, and a helicopter-landing pad. Or your inability to accept the fact that our lives would make a great reality show. Other than those things you have been supportive.

This is a work of fiction. Names, characters, places and incidents either are the product of the author’s imagination or are used factiously and any resemblance to actual persons living or dead, business establishments, events or locales is entirely coincidental.

A Note From The Author:

While each of the love stories for the books of The Cursed Clan are completed in each book, the quest for the jewels is something that will continue on until the completion of the series. This book and those that follow it will be more enjoyable if you read from book one and continue on.

Angus studied the clearing before them and stifled a sigh. How he had allowed his brother Logan to talk him into coming to see a witch was beyond rational thought. A fine mist was already starting to fall, but he could feel the change in the air.  A storm was coming and they were going to be drenched before they returned to the holding.

He glanced at Logan.

“What are we doing here?” he asked. Angus would be the last to admit it out loud, but he had a horrible feeling about this.  Logan would say Angus had an ability to foresee the future. Angus would say it was just a lesson he’d learned as a child. It wasn’t the first time Angus had to follow his brother into trouble.

“Grandfather said that she has the Sight.”

Angus rolled his eyes.
The Sight
. Who really believed in that nonsense? He studied Logan. His brother apparently did. Of course, artists were like that, believing in things that didn’t actually exist. From the time they were boys, Logan had lived in a dream world.

With the current situation in Scotland, Angus didn’t see how Logan kept his dreamy perspective on life.

“And, what does this have to do with me? Or you for that matter?”

“Don’t you want to know what your future holds? What you will do with your life?”

Unfortunately, Angus didn’t have that ability. Not really. His dreams at night didn’t allow him to ignore the future. If he disregarded the odd dreams he had been having over the last year, he could say that he would be a man of science.  Inwardly, he snorted.
What man of science dreams of things before they happen?

Angus shook that thought away and squinted into the clearing in front of the house. Had the fog gotten thicker? His mind was playing a bit of trickery on him.  He glanced at his brother, finding only eagerness on his face.

“Why would you? Everyone knows you’re going to be an artist. So, I repeat, what the bloody hell are we doing here?”

“I told him to bring you,” a scratchy female voice said from out of the doom. He had to fight the urge to scream. It tangled there in his throat, almost choking him. She cackled.

He squinted at the woman as she hobbled forward. She was older, of course. Weren’t all witches little and old. But there was a brightness in her blue eyes that told him to be careful of her. She might appear fragile, but she wasn’t.

He glanced at his brother, again irritated. “You told her we were coming?”

Logan shrugged. “She said she had a vision.”

A vision of how to gain some money.

“I ask nothing from you.”

He let one brow rise, pulling another cackle from the witch.

“You’ll do, Angus.” She motioned with her hand. “Come. We have much to discuss and there is not much time before.”

He opened his mouth to ask
before what
, but she was already hurrying off to her cottage.

“If you don’t believe in it, it shouldn’t really matter, right?” Logan asked, with amusement. Angus studied his younger brother, wondering how they could share the same blood. They looked alike in a way, but that is where the similarities ended. Logan believed in a dream world where fairies and witches frolicked in the forest.

Still, Angus had a sense of curiosity that fueled his love of discovery. He couldn’t fight the temptation  of learning something new or the challenge his brother presented.

Without saying anything, he turned and walked to the cottage. Logan kept pace beside him.

“For some reason, she wanted to see you. She mentioned you by name. How would she know your name?”

“I’m the grandson of a laird. Most people would know my name. And your name, too.”

The door was open when they reached it.

At the sound of her ominous tone, Angus rolled his eyes and stepped into the cottage. It wasn’t what he had imagined. No bats, no potions bubbling over the fire. He sniffed. There was some kind of soup simmering and fresh baked bread. The witch motioned toward them.

He did as ordered, just wanting to end this insanity. He stepped into the light and she squinted up at him.

“You are not the one I would have chosen.”

He glanced at Logan who shrugged.

She hummed. “Yes. For Titianna.”

She shook her head. “That might not be her name. Tis what I call her.”

She closed her eyes and he exchanged another glance with his brother. Small birdlike fingers wrapped around his wrist. Her nails dug into his flesh.

He gave her a narrowed look.

“She will not be alone. There will be another. Another who needs you as much as she does.”

Logan jabbed him with his elbow. “Ooch…looks like you are going to have more than one woman.”

She gave Logan a look of admonition. “Not another woman, but a relative.”

Her eyes slid shut again and the small space seemed to grow darker. She shivered. Cold burst through him, followed by a blast of heat. It spiraled through his blood and almost brought him to his knees. Pain sliced through his veins but in the next instant, it was gone.  When she opened her eyes, they were black. She spoke, but not with her own voice.

“There will be a time, long from now, when men can fly. You will seek her out, but not for the right reasons. In the end, the test will not be of the strength of your mind. That has always been strong. In some ways too strong.”

“I told you she had the Sight,” Logan murmured, but Angus ignored him.

“This will be a test of the your heart and soul. It will rip you apart, sending your world into chaos; but if you choose the right path, she will be your salvation.”

She released him then, and stumbled back.  Logan grabbed her, keeping her from falling into the fire. He looked at Angus and he could tell his brother was wondering at Angus’ inaction. He could not speak. His heart was beating too hard, his head whirling with the visions she had spoken of.

When the witch opened her eyes again, they were normal. “You have dreamed of it.”

Cold fear slipped down his spine. “What?”

“A time of men flying in the air and cities with buildings as tall as mountains. Horse carriages carry men from one place to another so fast it makes you dizzy. And you have dreamed of her—the one with the red hair.”

“No.” But even to his own ears, he did not sound that convincing. He could feel his brother’s study. Angus ignored it. He needed out of there and away from the woman.

He turned to leave.

“You can run, Angus, but she will find you. It will be many years in the future. She will fight you, but she is your other half.”

He stopped and glanced over his shoulder. “My other half?”

“Yes. Together, you can do anything you want, but hear me, Angus. Treat her well or you will regret it.”

He turned to fully face her.

She smiled. “No, tis a fact. We don’t appreciate it when people hurt the women in our family. Heed my warning, or your world will turn dark. Darker than even the days we have ahead of us.”

That stopped him. “Do you know something?”

The smile she gave him held no humor, only sad knowledge. “Life as we know it—as
you
know it—will end. But, it means a new beginning. Remember Angus of the McLennans, that all things will be worse before they resolve. Now go.”

She didn’t have to tell him again. He hurried out of the cottage, his mind clouded and his heart heavy.

Tension left the air in Callum’s study heavy. Angus rolled his shoulders trying to push away his worries.  Of course, it didn’t work. The fact that Phoebe and Callum called a family meeting within hours of returning from their honeymoon definitely told Angus there was something big on the horizon.

Since he hated waiting, Angus decided to get the ball rolling. “You’ve figured out where the next jewel is.”

Anice, his younger cousin and the most optimistic of the Clan, jumped out of her seat, a smile curving her lips. “You have?”

Callum and Phoebe exchanged a look.  A sense of foreboding settled on his soul.

“It’s not good news.” A statement from Fletcher. Angus glanced at his cousin, Anice’s older brother. If Anice was always optimistic, Fletcher was cold calculation.

“No.” That one word from Callum sent vibrations of irritation through the room.

“Oh, for goodness sake, Callum, stop drawing it out.” Phoebe shook her head. Brilliant in a way that not even Angus understood still, Phoebe had come to them months earlier to help with the witch’s diary. Since she and Callum had fallen in love, the bond had helped their clan grow stronger.

Callum scowled up at her. “Love—”

“Don’t
love
me. Lord, I don’t know why you have to act like you’re a character in
Braveheart
all the time.”

The Library at Mount Char by Scott Hawkins
The Grand Sophy by Georgette Heyer
Ballad by Maggie Stiefvater
Agustina la payasa by Otfried Preussler
miss fortune mystery (ff) - bubba dub dub by cheever, sam
The Siege: 68 Hours Inside the Taj Hotel by Adrian Levy
The House You Pass on the Way by Jacqueline Woodson
Back Under The Stairs - Book 2 in The Bandworld Series by John Stockmyer
Alpha Bully by Sam Crescent
Last Tales by Isak Dinesen