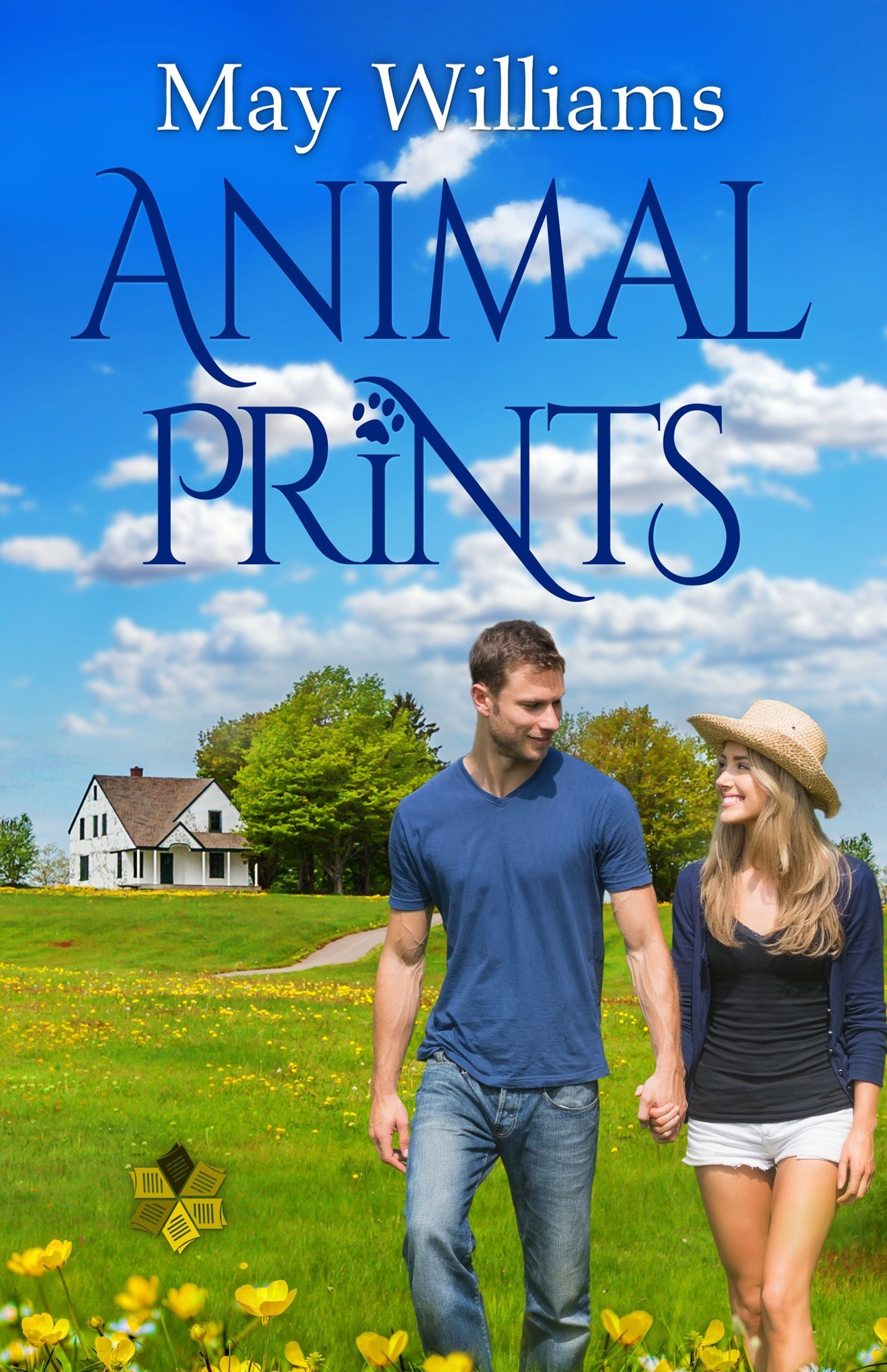 ALSO BY MAY WILLIAMS

Join our newsletter to be the first to know about our new releases!

Sign up for the
Penner Publishing
New Release Newsletter

To my family for being quiet when I’m writing and traveling with me to the beautiful places that inspire my stories.

I’d like to thank my critique partner, Amie Denman, for her willingness to share a glass of wine and read yet another version of my manuscript.

I’d also like to thank my editor, Thalia Sutton, for reminding me to continuously ask the important question—“How does that situation make the character feel?”

His photographer’s eye absorbed every detail in a second: blond hair, medium height, slender with a hint of curves. Oval face, high cheek bones, full mouth with a small crease in the middle of her bottom lip, finely arched brows over bright blue eyes. All details suggesting a delicate woman, but her constant movement and interaction with various animals said vibrant and caring. A greyhound the size and color of a fawn rubbed against her legs as she talked to the owner of a black, floppy-eared rabbit.

This was Colette Peterson, the veterinarian he’d come to Grand Island to meet.

As she stood beneath the sunshade, she bore only a slight resemblance to her image on the Petoskey Animal Clinic’s Facebook page, which meant that whoever took the Facebook picture was one lousy photographer. He knew exactly how he’d frame a shot of her, and the setting here was ideal. He could use the rolling hills and fir trees of the Island as a backdrop or put the blue waters of Lake Superior behind her. It would be a tough choice that wouldn’t matter anyway because, the way he saw it, her face and figure would make the beauty of the scene irrelevant.

But he wasn’t here to take her picture as he had so often done for others. This was business. Mostly. He snapped a wide angle shot of the small park where the temporary animal clinic was set up, making sure Colette was in the frame. He might be here to talk real estate business with her, but photos were
his
business. His father would have to forgive him for combining the two. The trip wouldn’t be worth it otherwise.

The owner of the rabbit walked away, and for the first time in an hour, his mark didn’t have a lineup of people toting animals of some variety. He wasn’t letting this chance slip by.

“Hello,” he called, approaching the small, green and white striped tent and sticking out his hand. He considered scooping up a few wildflower blossoms that grew at his feet in the dense green landscape to offer her, but he reminded himself, this was business. The greyhound slipped behind her as he neared, twisting its neck questioningly around the side of her leg.

“Hi.” She glanced up from her clipboard. Tucking the pen in her pocket, she shook his hand. “I’m Colette Peterson, and this is Romeo.” When the dog whined, she dropped her hand to rub his ears.

“Ian Kroft.” He gingerly stuck out his hand for the dog to sniff, but the animal pulled behind Colette, distrustful of him. “Sad name for such a beautiful dog.”

She smiled at him now, adding a glow to her eyes and skin. He wanted to capture exactly that look with a photo. Complimenting her pet was definitely the way to get on her good side. He’d remember that.

“He’s seen some tragedy, but I’m hoping for a happier ending for this Romeo.” She stroked the dog’s head as she spoke. Romeo turned his head into her hand to gather all her attention. “Is there something I can help you with, Mr. Kroft? You don’t appear to have an animal with you.”

“Animal? No, I’m just on the island for the day and wondered what was going on.”

“We call it the round-up. The island residents bring their pets for a checkup and vaccines.”

“So you’re the island’s veterinarian?” He already knew the answer to that through a combination of internet searches and Facebook lurking, but the point of today was to get her comfortable with him. And that was no hardship; it was probably the easiest thing his father had ever asked him to do. Hell, it was the
only
thing his father had asked of him in years, and it seemed so simple: buy the Peterson land near Petoskey, along the shores of Lake Michigan. Just a straight-forward, land-buying business transaction with owners who needed a little personal persuasion, his father promised. No complications.

“Not exactly. My family has a cottage on the island, but we’re only up here occasionally. I live in Petoskey.” She pointed to the words embroidered on her shirt. “The real animal clinic’s there.”

“From what I’ve seen today, this is a great place to visit.”

She must have noticed him earlier. He wouldn’t have bet on that considering the way she’d stayed focused on the menagerie of animals traipsing through the tent during the afternoon, but it left a little flurry of feeling in him.

“Yeah.” He lifted the camera strapped around his neck, suddenly self conscious of the Canon. “I tend to take a lot of pictures.”

“So I saw,” she said, arching a brow at him. Was she mocking him?

He grinned at her. “If I have a camera in my hands, I’m going to start clicking away, especially when everything here is so photogenic.” He found himself unable to take his eyes off her face.

“Lots of photographers and artists come here. They all rave about the light.” She turned her face to the sun. The filtered light of the sunshade made her skin a warm, peachy color. “Is that what you see, too?”

“The light’s exceptional. Bright, without being harsh, but with a golden hue that makes everything stand out distinctly.” He turned to where the park sloped down toward the ferry dock. Along the edges of the park, pine trees gave way to rocky shoreline and blue water. Across the water, the sandstone cliffs of the mainland reflected light back toward the island. “It’s one of the most amazing places I’ve seen.”

“Have you been to the far side of the island? It’s more rugged and wild there, but just as picturesque.” Romeo inched around Colette’s leg while they talked. Ian put out his hand again and tried to focus on making friends with the dog, but her slender, jean-clad leg kept distracting him. The dog gave his fingers a sniff and retreated.

He shook his head. “Too much to see here. I’ve walked a couple of the trails along the lakeshore and taken a few hundred pictures, but I’ll have to come another day to see the whole island.” He thought he’d like to see a lot more of her too, and not for business reasons. But that would complicate the hell out of the business transaction and may be grounds for legal challenges if things didn’t stay good after. And he couldn’t have that; he wanted what this transaction could do for him. No, he corrected himself while pretending to study the shoreline, he
needed
it. “Are you headed to the mainland tonight?”