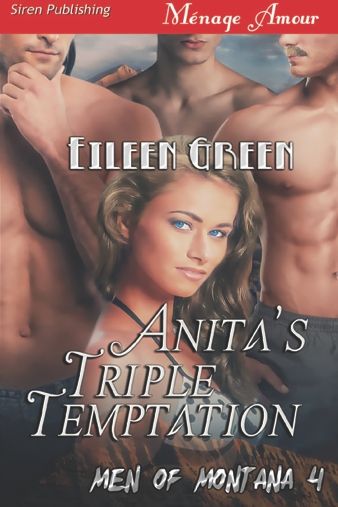 After tragedy strikes, Anita Cummings is left to raise her three children on her own. Or, so she thought. The day her life took a tragic turn became a new beginning of love, friendship, and a new experience into the world of polyamorous relationships upon meeting the crew from the Circle G ranch.

Dave Olson, James Bowman, and Kevin Tisdale have set their sights on the grieving woman. Through the months they show her their love for her is real, and now it is time to claim her.

They prove to her that they will provide for her and protect her, but can she open up her own heart to the three men and trust them with her boys? Everyone at the Circle G is there to help, and when danger comes calling again, dragging her and one of her men into its clutches, can they work together to save them?

If you have purchased this copy of
Anita’s Triple Temptation
by Eileen Green from BookStrand.com or its official distributors, thank you. Also, thank you for not sharing your copy of this book.

This is Eileen Green’s livelihood. It’s fair and simple. Please respect Ms. Green’s right to earn a living from her work.

I dedicate this book to my fans who have overwhelmingly shown me your love and support by reading my books. I write for the love of writing as you read for the love of reading, so we mesh well together. I hope you continue to enjoy my stories as much as I enjoy putting them together for you.

Disdain illuminated Anita’s features at the man standing before her and he was perfectly aware of it. The audacity of his suggestion made her sick to her stomach. How dare he confront her about such a thing mere months after her husband had been buried! The woman had always known the man was a slimeball in business, but she never imagined him conducting himself as such in public.

Trying to be civil, Anita tried to place a smile on her face, though deep down she didn’t mean it. “Thank you, Virgil, for your kind offer, but I have to decline. Since Craig has passed, I have things I have to take care of, such as our children. So if you’ll excuse me, I have to get back to them.”

An evil grin evolved on the dashing man’s face. Granted, he was a good-looking man at thirty-five. At six two, he carried his two hundred twenty pounds well within a gym-pumped muscular body. His face was a bit boyish, but that’s what people seemed to trust about the man. He had a chiseled square chin with a dent in the middle under full lips and above that a nice straight nose. Sapphire-colored eyes that were usually twinkling in delight now looked black with the anger he appeared to be holding back at being dismissed. They seemed to match in color the short, clean-cut hair he sported.

He wasn’t anything like the loggers he managed. Most of the men were rugged, muscular men that had earned it by the work they did.

Virgil Cantrell was, in Anita’s opinion, as slimy as a snake dipped in oil. She didn’t like or trust him when Craig was alive, and she certainly wasn’t going to change her opinion now at his offer. Besides, she knew she was young, but she wasn’t naive. She knew he assumed his offer of protection, in and out of his bed, would prevent her from having her husband’s accident investigated. There were already people sniffing around and she knew he was starting to spook at the idea.

“I will be waiting for you when you change your mind, Anita,” he said when he saw the small brown tousled head of her youngest child peek around the door. “You can’t raise your little ones by yourself and you will need someone with money to help you. As it is, even with what Craig was making, you were barely living.”

“Pfsst!” passed her lips before she could stop it. “And whose fault is that, Virgil? You very well know you paid your workers sh—very little. I know some of the men that are barely making it and they are single. Craig didn’t know anything else but logging so he couldn’t get a job elsewhere. When your father ran the company, things were great. When you took over after his death, you changed everything. Why couldn’t you have just left things alone?”

Anita hadn’t realized she was crying or shouting until she slammed the door in the man’s astonished face. Turning, she found all three of her children standing in the small hallway, staring wide-eyed at her outburst. Leaning against the door, she took deep breaths to calm herself while she was looking at all she had left of her high-school sweetheart, their children.

Unfortunately, Virgil was correct on one account. She wasn’t going to make it on what they had saved. She was going to have to go out and get a job. Her mother had offered to babysit for her but that would only be at night because of her mother’s job at the school. She’d have to get a night job, but she really wasn’t qualified for anything except perhaps fast food or waitressing. At least with waitressing she’d earn tips.

Shoving her thoughts aside as she pushed herself off the door, she started guiding the three youngsters into the living room. Trying to be cheerful and hoping they hadn’t heard everything that was said, she attempted to focus their minds elsewhere. “It’s all right, guys. We’re going to have a movie night. You go clean up your room while I get stuff together, okay?”

Three faces lit up brightly at the idea and they took off running for their room. Going into the living room, she straightened up in there before going into the kitchen and pulling out the popcorn and goodies for theater night.

While reaching up into the microwave above the stove to place a bag of popcorn, a sound came from behind her and she jumped slightly. Damn, Virgil had her spooked now!

Joshua, one of the twins, was standing there, a curious look upon his face. “Momma, that man wasn’t very nice making you cry. Why don’t you get Uncle James, Kevin, and David to talk to him? They’ll make him be nicer to you.”

The heart in her chest seemed to clench at his innocent words. She knew all three of her kids were enthralled by the three cowboys, but they had to understand that she couldn’t go to them for every little thing. Yes, they had insinuated themselves into her life, trying to help her out after Craig’s death, but she had to learn to do things on her own.

She herself was enthralled by them, which frightened her. They made no qualms about wanting a relationship with her, but it had only been months since Craig died and she felt as if she were betraying him already just being around them. They were friends for now, playing uncles to the boys until they could understand better the relationship that the men were seeking from her. That’s all it could be. Perhaps down the road she might be able to think about it, but not now.

Reaching out, Anita tousled the brown hair of her youngster, smiling. “It’s not that easy, buddy. We can’t just call them every time something happens. We have to learn how to stand up as a family, just the four of us. I have to learn how to handle things without them. Don’t you want Mommy to be strong?”

“Oh, you’ll never be as strong as them, Momma.” Innocence laced his words. “They can pick up bales of hay and baby cows. You’ll never be able to do that.”

Trying to keep from laughing, she watched as he turned about and ran back to his room to finish cleaning. Out of the mouths of babes, she thought.

Deadly Coast by McDermott, R. E.
A Window Across the River by Brian Morton
Test Drive by Marie Harte
Up in Flames by Evans, Geraldine
The Horse Dancer by Moyes, Jojo
Betrayed by Smith, Anna
Rumors from the Lost World by Alan Davis
Woken Furies by Richard K. Morgan
Erogenous Zones: Monica's Secret by Saskia Walker
Murder on High by Stefanie Matteson