Read Anna on the Farm Online

Anna on the Farm 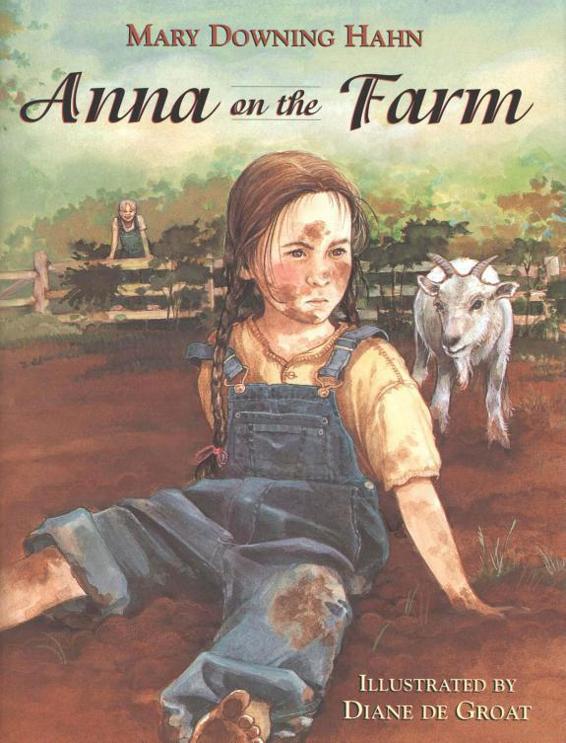 The text was set in 14-point Garamond.
The illustrations were executed in pencil.

ONE
Where Are You Going This Summer?

O
NE SUMMER DAY,
A
NNA,
B
EATRICE, AND
R
OSA ARE
sitting on Anna's front steps, fanning themselves with old newspapers. The narrow brick houses crowd together, trapping the heat. No breeze blows. Even the pigeons waddle slowly, making sad cooing sounds.

Anna thinks Baltimore is the hottest city in the world. Just this morning Father said the sidewalk was hot enough to cook his breakfast. Anna wanted Mother to try frying eggs outside to keep the house cooler, but Mother told her that was a silly idea.

Beatrice and Rosa are playing cat's cradle with a piece of string. As usual, Rosa is bossing Beatrice, telling her to hold her fingers still. Whenever the three girls are together, Rosa thinks of something only she and Beatrice can do. At least that's how it seems to Anna.

Anna sighs loudly, hoping to get the other girls' attention, but they are more interested in their stupid piece of string than they are in Anna. She looks across the street, hoping to see her friend Charlie. His little sisters and brothers are chasing each other up and down the sidewalk, but Charlie isn't there. Most likely he's playing ball with the neighborhood boys. Anna wishes she were playing ball, too. Anything would be more fun than sitting here watching Rosa and Beatrice.

The melon man passes Anna's house every day. Mother buys one watermelon a week, no more. The man tips his cap to the girls, but he does not stop. Mother bought her watermelon yesterday.

Anna wishes the wagon would hit a bump and a watermelon would fall off and roll right to her feet. She can almost taste it—cold and wet and sweet and pink, with hard black seeds to spit when Mother isn't looking.

The wagon rolls on down the hill toward North Avenue. No watermelons fall off. Anna sighs again. "It's so hot," she says loudly.

Rosa pushes her blond curls back from her round pink face. "Guess what? I'm going to the ocean next week. It will be much cooler there."

"I'm going to the mountains," Beatrice says quickly. "It will be even cooler there."

Rosa gives Beatrice's skinny arm a little pinch, just hard enough to hurt. "We're going to stay in the Henlopen Hotel," she brags. "It's the most expensive hotel in Rehoboth Beach. In the daytime, we'll wade in the surf and build sand castles. At dinner, we'll dress up in our best clothes. In the evening, we'll walk on the boardwalk and eat candy apples and frozen custard and saltwater taffy."

Anna's mouth waters. She's never eaten saltwater taffy at the ocean. In fact, she's never even been to the ocean. She imagines it's like the Chesapeake Bay, only bigger. She hopes the water is full of jellyfish so Rosa will get stung while she's splashing in the water. It would serve the stuck-up thing right.

"We're going to Penmar on the train," Beatrice says quietly. "The air is very fresh in the mountains. Dr. Thompson says it will be good for my cough."

Both girls look at Anna. Everybody goes on vacation in August. They're waiting for her to tell them where her family is going. Instead, Anna bends her head and picks at a scab on her knee. The truth is she's not going anywhere. Father says they can't afford a vacation, but Anna doesn't want to admit this to Rosa and Beatrice.

"Well?" Rosa pokes her plump finger in Anna's ribs. "Where are
you
going?"

"We haven't decided yet," Anna says. "Mother likes the mountains and Father likes the ocean." This isn't exactly a lie. What she's said about Mother's and Father's likes and dislikes is true.

"Maybe you'll spend a week in the mountains
and
a week at the ocean," Beatrice says. "Wouldn't that be fun?"

Rosa gets to her feet. "Anna isn't going anywhere," she says. "Her mother and father probably can't afford a vacation."

But Rosa is already walking down the hill toward her house. "Come on, Beatrice," she says. "Mother has promised to make nice cold lemonade and sugar cookies."

Beatrice hesitates, but Anna is too mad to care whether Beatrice goes or stays. Turning her back on both girls, she runs into her house and slams the door behind her.

Mother and Aunt May look up when Anna stamps crossly into the kitchen. They are having their afternoon coffee. Anna cannot imagine drinking something hot on a summer day, but Mother claims it makes you cooler.

"Your face is red," Aunt May says. "Are you coming down with something?"

Mother looks worried. "Come here, Anna, and let me feel your forehead," she says. "Just yesterday I saw a scarlet fever quarantine sign on a house on Bentalou Street."

"My, my," Aunt May says, laughing. "So many
s's, meine hübsche Kartoffel.
You sound like a hissing snake."

"It's not funny." Anna sticks out her lip. She isn't in the mood for Aunt May's little jokes or her funny German words. If her aunt wants to call Anna a smart potato, why can't she say it in English?

Before Mother can tell her to hush, Anna says, "Rosa's going to stay in a big fancy hotel in Rehoboth Beach, and Beatrice is taking a train to the mountains. But we're not going anywhere! It's not fair!" Anna knows she's speaking too loudly, but she can't help herself. She's so mad she even stamps her foot.

"Hush, Anna," Mother says. "I will not tolerate such rude talk. You know perfectly well we can't afford a vacation. I don't know where the Schumanns find the money for such foolishness. Vacations are for rich people."

Aunt May takes a sip of coffee. "Poor Anna," she says. "I know how you feel. I'd love to spend a week at the ocean myself."

Mother sighs. "I prefer the mountains. The sun is too hot at the ocean. It burns my skin."

Anna turns and sees Father coming through the front door, home from his job at the newspaper.

"I want to go on a vacation like Rosa and Beatrice," Anna tells him. "To the ocean, to the mountains—I don't care which."

"How about Uncle George's farm for a week?" Father asks. "Would that do?"

Anna stares at Father, too surprised to speak. Mother and Aunt May also stare at Father, just as surprised as Anna.

"I talked to my sister today," Father tells Mother, smiling at Anna. "Aggie thought Anna might like to get away from the city for a while."

Anna hugs Father. "Yes, yes, yes!" she shouts, jumping up and down with excitement. She can hardly wait to see Aunt Aggie and Uncle George. "I'd love to go to the farm!"

Mother looks worried. "But Anna is a city girl," she says. "What will she do on a farm for a whole week? Suppose she falls and hurts herself? Suppose a cow tramples her? She might step on a rusty nail and get lockjaw, she might ruin her looks with freckles, she—"

Aunt May agrees. "The farm will be good for Anna. Think of the fresh air, Lizzie—fresh milk, fresh eggs, and fresh vegetables, too. All that freshness will put roses in Anna's cheeks and flesh on her skinny little bones."

"It's not as if Anna is going to the end of the earth," Father puts in. "George's farm is only twenty miles away. We've been there together many times. Now Anna will go without us, but she's nine years old—just the right age for an adventure."

Mother sighs. With both Father and Aunt May in favor of the farm, she's losing the argument. "I suppose you're right," she says slowly. "Anna is pale and much too thin. Perhaps the farm is just what she needs."

Although Anna doesn't like people to say she's pale and thin, she's too happy about going to the farm to be cross with her mother and her aunt. After all, it's not the first time someone has mentioned these things. She gives Father one more hug and then runs to give Mother a quick kiss.

"I promise to be good," she tells Mother. "I won't go near the cows, and I'll be careful not to step on rusty-nails or ruin my looks with freckles. And I'll eat lots of food and get big and fat like Rosa!"

"At least Anna can't skate at the farm," Aunt May says, reminding Mother of the day Anna skated down Bentalou Street, fell, and split her chin open.

"Don't worry," Father says. "You'll find plenty of other things to do, Anna."

"That's just what worries me," says Mother. "Anna has too many notions in her head as it is. Without me to keep an eye on her, there's no telling what she'll think of."

Aunt May laughs. "Don't be silly, Lizzie. Anna has no more notions than any other healthy child."

Anna turns her head to hide a smile. Mother is right. Anna has many notions. But she has promised to be good and, even though it won't be easy, she will try to keep her word.

"Can you wait until after church tomorrow?" Father asks.

But Anna dances around the kitchen. "Hooray!" she shouts. "Hooray!"

"It has to be this week, Lizzie," Father tells Mother. "George begins harvesting the wheat next week."

"But I have to wash Anna's clothes, iron her dresses, darn her stockings—"