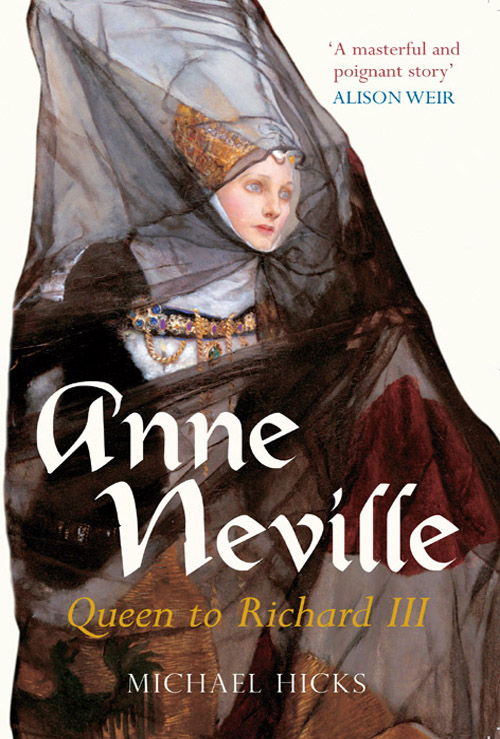 Alison. Weir has published ten books:
Britain’s Royal Families, The Six Wives of Henry VIII, The Princes in the Tower, Children of England, Elizabeth the Queen, Eleanor of Aquitaine, Henry VIII: King & Court, Mary Queen of Scots & the Murder of Lord Darnley
and
Lancaster & York: The War of the Roses
and
Isabella, She-Wolf of France, Queen of England
. She is at present researching for a book on Katherine Swynford and John of Gaunt. Alison Weir’s chief areas of specialism are the Tudor and medieval monarchies. She has researched every English queen from Matilda of Flanders, wife of William the Conqueror, to Elizabeth I, and is committed to promoting the studies of these important women, many of whom have been unjustly sidelined by historians. 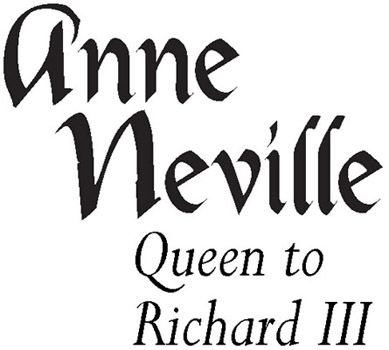 The right of Michael Hicks, to be identified as the Author of this work
has been asserted in accordance with the Copyrights, Designs and Patents Act 1988.

M
ichael Hicks’ excellent reputation as a leading expert on late medieval England has long been established. Now he returns to the fifteenth century, with a fascinating and authoritative study of Anne Neville, daughter of Warwick the Kingmaker and queen consort of Richard III, the first full-length biography of this much-neglected woman, which has been years in preparation and will undoubtedly be the standard life for a long time to come.

Unlike other queens of the period, Anne’s existence is poorly documented, but from the few fragments of information that have come down to us, Professor Hicks has crafted an intriguing, lively and often poignant story, rich in detail and based on wide-ranging research and an unparalleled and extensive knowledge of the period. This is no romantic tale – unlike the only previous account of Anne Neville, which was written by Agnes Strickland in the 1850s in her
Lives of the Queens of England
– but a realistic and convincing portrayal that offers new insights into the controversies that overshadowed Anne’s existence, and accords her her proper place in the world in which she lived. For Anne Neville was a very important personage in her own time, and her life was closely entwined with the history of England itself.

Most compelling of all is Professor Hicks’ depiction of Anne’s marriage to the controversial and enigmatic Richard, Duke of Gloucester, later Richard III, a union fraught with difficulties, and which was to end in tragedy. Discarding all the popular theories that have gained currency in recent years, he presents a masterful and tantalising assessment of the relations between the two, and reveals startling new evidence that touches the very essence of their marriage.

When writing a medieval biography, it is often difficult to gain an impression of what one’s subject was actually like, yet despite Professor Hicks’ entirely justified protestations that there is much that we can never know about Anne Neville, this absorbing biography has nevertheless left me with a strong impression of a real flesh-and-blood woman, and I have no doubt that it will appeal not only to scholars of the period, but also to the legions of people who are interested in Richard III and his times. I am privileged to be associated with such a book.

A
nne Neville is the most obscure of England’s postconquest queens and, many would argue, deservedly so. I did not select her as one of the four out of twelve late medieval queens for a biography in my
Who’s Who in Late Medieval England
in 1991. Even amongst Joanna Laynesmith’s prize-winning
Last Medieval Queens
, much less was said of her than about Margaret of Anjou, Elizabeth Wydeville or Elizabeth of York. My previous books on Anne’s father,
Warwick the Kingmaker
, her husband,
Richard III
, her brothers-in-law,
False Fleeting Perjur’d Clarence
and
Edward IV
, and her nephew,
Edward V
, who interacted with Anne at many points, demonstrated conclusively the absence of any unexploited caches of records and the sparseness of information available today. So did my brief life of her for the
Oxford Dictionary of National Biography
. As Richard III is much the most popular of late medieval English kings, however, there is much more demand for a biography of Anne than the other queens. When Jonathan Reeve, once again, proposed a book on Anne Neville, I said, with regret, that it was impossible. ‘That’ (I paraphrase) ‘is what you said last time over Edward V’ was his response. And so I agreed to write this book. Preparing a synopsis revealed some possibilities in the topic. Writing it has
revealed much more. Revisiting such topics as the contractfor Anne’s first marriage, Richard’s proposal to marry his niece and the Warwick inheritance dispute from another angle has enabled more to be extracted from the sources, more implications to be recognised and explored, and our understanding of the era, the principal characters, and their interactions to be enriched. That is one advantage of biography and, for me, the main point of the genre. Although not necessarily capturing the essence of these topics, this biography does bring together everything that is known about Anne, casts light both on her successive predicaments and on her times, and does significantly advance historical understanding of some of the key individuals, issues, and events. Thank you very much, Jonathan, once again.

Anne received a girl’s education, grew up into a lady, married twice, was widowed, became a princess, duchess and queen, and spent her whole life in the grip of the Wars of the Roses, so this book draws repeatedly on historians of each of these separate fields. Her study is a by-product of those of her father Warwick the Kingmaker, brother-in-law Clarence, and husband Richard III. The life of Richard III (and hence his consort)is not merely an area of controversy but a co-operative enterprise, in which extra bits of information and perceptions are being constantly added by many interested parties. Hence the prominence of references to
The Ricardian
, journal of the Richard III Society, which has been constantly consulted, even though relatively few such items have demanded a place in the bibliographical essay. Like all other operators in this field, I gratefully acknowledge my debt first to Alan Sutton and more recently to the Society and the Richard III and Yorkist Trust, which have made so many sources available in modern editions. The contributions of Peter Hammond, Anne Sutton, and Livia Visser-Fuchs cannot easily be overstated. Just in the nick of time, Peter Hammond and Geoffrey Wheeler kindly
drew my attention to Peter D. Clarke’s important article on ‘English Royal Marriages and the Papal Penitentiary in the Fifteenth Century’in
English Historical Review
cxx (2005). This article proves both that Anne Neville
did
have a dispensation to marry Richard III and, unwittingly, that this dispensation was inadequate – and thus that their marriage (as I had already deduced) was never valid. I gratefully acknowledge the guidance and stimulus of the late Charles Ross, who first introduced me to the Wars of the Roses, and the influence among so many others of Ralph Griffiths, Rosemary Horrox and Tony Pollard. Researching and writing books inevitably takes place out of term and out of what ought to be family time: I gratefully acknowledge the forbearance of my wife and my now adult children.

All quotations have been rendered into modern English and all places of publication are London unless otherwise stated.

CHAPTER ONE
Why Study
Anne Neville?

Was ever woman in this humour wooed?

Was ever woman in this humour won?
1

T
he woman was Anne Neville, the wooer Richard Duke of Gloucester, and the occasion the funeral in 1471 of Anne’s father-in-law King Henry VI, whom Richard had slain. The immediate sequels were Anne’s second marriage to Richard, later to become Richard III. Hence in due course Anne was to accede as Richard’s queen. Through Richard’s speech and throughout this whole celebrated scene, Shakespeare made his Lady Anne into one of the best known figures in history, albeit – like the Princes in the Tower – seldom remembered by name. Sir Laurence Olivier and Claire Bloom brought them to millions through play and film and are still doing so today.