Read Around India in 80 Trains Online

Around India in 80 Trains 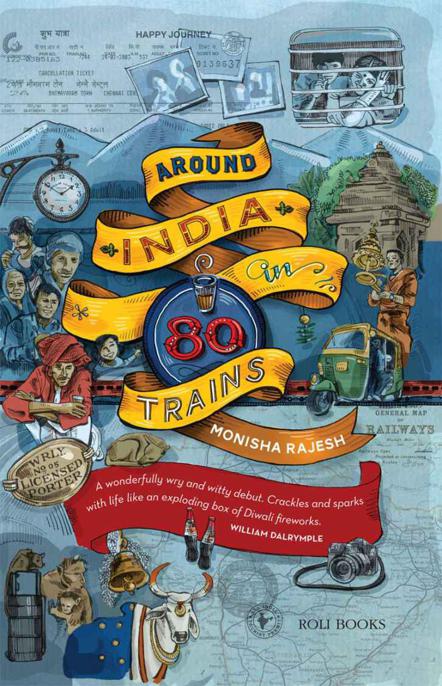 All rights reserved. No part of this publication
may be reproduced or transmitted, in any form or by any means,
without the prior permission of the author.

For Mummy, Papa and Rahul, who have been on
board through all my journeys.

London had never looked so grey. From the eighth-floor windows of
TIME
magazine’s Southwark offices the city’s skyline was spiked with cranes, aerials and chimneys unfurling charcoal plumes. Even Westminster’s spires, normally bouncing back glimmers of winter sun, had disappeared under the late-November fog.

Shivering beneath the air vent I turned back to my computer and scrolled through an article detailing how India’s domestic airlines could now reach 80 cities. Intrigued, I printed out a map of the country and pored over the airline routes. They were impressive, but nowhere near as much as the railway network, which ran the length and breadth of the country, embroidering the tips of its landmass. I scanned the map, taking in the extent to which the railways covered the country. It was almost 20 years since my family had tried to move back to India to settle, but after spending two traumatic years in Madras we had made a hasty retreat home to England. India and I had parted on bad terms and little more than the occasional family wedding had succeeded in tempting me back.

As I stared out at the skies, sombre at 10am, India’s sunnier climes were an inviting prospect. I had barely stretched a toe beyond Madras and Hyderabad where my extended family lived, and always knew my curiosity about the rest of the country would get the better of me. So far every trip back had involved frog-hopping from one relative’s house to the next, having my cheeks pinched, marvelling at my cousins’ increasing waistlines while they frowned at my bones, and flying out as fast as I had arrived, with a suitcase full of
murukkus
. But I had never seen India as a tourist. If I was to go back and give it a real chance after 20 years, what was the best way? Leaving a gargantuan carbon footprint behind 80 flights was hardly the right way to go. As I traced the railway lines with a finger, an idea began to form in my mind. I called out to my colleague across the desk.

‘Willy-Lee, what do you think of travelling around India in 80 trains?’

He glanced at the diagonals of rain spattering the windows and put on an oversize pair of Dior sunglasses, flipping his scarf over one shoulder.

That evening I stayed late after work and trawled Amazon for travelogues on India’s railways. While there were almost 3,000 books relating to the history, modernisation, finances and, of course, the British hand in building the railways, few were personal accounts. Both Rudyard Kipling and Paul Theroux had covered segments, and Michael Palin had endured a few journeys in his version of
Around the World in 80 Days
. But with the exception of Peter Riordan, a journalist from New Zealand, it seemed that nobody had recently written about a solo journey around India by train. As I gathered my things and waved to Willy-Lee, who was transcribing an interview with Dame Vera Lynn and staring mournfully at the clock, I wondered whether there was a reason for this: were the railways too dangerous? Maybe those who had tried to circle the country by train had fallen ill, been mugged, or died along the way before anyone could hear about their adventures. Still, the thrill lay in the uncertainty of it all.

Of the two years I had spent in India, my fondest memories were of the trains: tucked up in a cosy, curtained cabin aboard the Pandian Express to visit my brother at his boarding school. I could close my eyes to the heat and horrors of Madras and open them as the Palani Hills rose through the dawn haze. Trains were my escape, my ticket out of the city. They allowed me to curl up in comfort as my surroundings slipped away. Unlike air travel, a cramped, clinical affair conducted in recycled air, causing bad tempers and bad breath, train travel invited me to participate. I could sit in the doorway, thundering across rivers instead of pressing a forehead to a grimy oval window, watching them snake silently below. Since 1853 when the British waved off the first passenger train from Bombay to Thane, the network had rippled out across the country earning the nickname, ‘The Lifeline of the Nation’. Trains carry over 20 million passengers every day along a route of 64,000km, ploughing through cities, crawling past villages, climbing up mountains and skimming along coasts. Eighty train journeys up, down and across India would, I hoped, lift the veil on a country that had become a stranger to me.