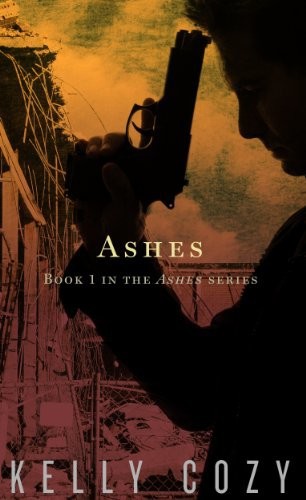 Book 1 in the
Ashes
series

ASHES. Copyright © 2013 by Kelly Cozy. All Rights Reserved. Printed in the United States of America. No part of this book may be used or reproduced in any manner whatsoever without written permission except in the case of brief quotations embodied in critical articles and reviews.

The story continues in Reckoning (Ashes #2). | Read a chapter from Reckoning now...

A preview chapter for | Reckoning (Ashes #2)

Reckoning (Ashes #2) | is available in print and ebook

Very special thanks to the Constant Reader Brigade: Erik Hoard, Gerry Hoard, Alyca Tanner, Albert Muller, and Karen Girard. I couldn’t do it without your encouragement and feedback.

Much love to Scott and Alex, for cheerfully shepherding the burden of living with a writer and for their unflagging enthusiasm.

A nod of appreciation to the Womenread book club of Pasadena, California for their enthusiasm; to the Southern California Writers' Conference for advice and encouragement at a crucial juncture; and to the fine folks at BookBalloon for (virtual) tea and sympathy.

For providing a fine writer’s refuge, my thanks go to the city of Solvang, California and especially to the Royal Copenhagen Inn, The Book Loft, The Bulldog Café, and Paula’s Pancake House.

D
owntown Los Angeles glittered in the sun, seemed to preen. The city knew its best light — a spring morning, the sky cleansed of smog by the past weekend's rain — and its best angle — from a distance.

Driving south out of the scrubby Glendale foothills, Jennifer Thomson took a moment to appreciate the city. In the clear March air, the skyline had a glamour it lost the closer she came. She took the moment but did not cherish it, for she did not know that before noon the sky would be sullied by a column of smoke and dust, that the skyline would be forever altered, that the sound of police and news helicopters would be audible for miles.

Jennifer drove as quickly as she dared without catching the attention of the California Highway Patrol. She was not anxious to get to work. Rather, she was trying not to be late. She had no one to blame but herself, having hit the snooze button once — or was it twice? — more often than usual.

But judging from the lighter-than-usual traffic, Jennifer thought she wasn’t the only one who would be tardy today. She wouldn’t have cared about being five (or fifteen) minutes late, but her boss did care, and Jennifer had no desire to hear Maggie Stone remark on her tardiness again.

Luck was with her. In the underground garage she found a parking spot close to the elevator. The maintenance man even took a break from hauling trash cans and held the elevator door open for her. Jennifer smiled and thanked him, then punched the button to floor eighteen. Now, if only her luck was in.

It was. Maggie Stone was nowhere to be seen, and the other employees were too busy getting their morning caffeine fix to notice her late arrival. Jennifer took advantage of the reprieve and paused to give her outfit a once-over. The gray skirt and pink sweater hadn’t needed ironing, but she wished — not for the last time that day — that she’d worn more sensible shoes. She ran a brush through her hair, picked up her travel mug, and went in search of coffee. A pot of French roast had just been brewed. Jennifer smiled, hoping that her luck would hold.

It would. Just enough to keep her alive.

Her office was a branch of the grants department, and as undistinguished a cubicle farm as any she’d ever worked in. Pale gray partitions and mauve accents on the walls left over from the early 1990s. Inspirational prints with images of sunsets and mountain climbers, symbols of success and teamwork, bought frames-and-all from the discount office supplier. Modular desks, a PC resting on each. Plants on the desks and dotted around the room, nourished by fluorescent lights; the African violets thrived but did not bloom.

A small sign,
Jennifer Thomson, Receptionist,
marked a corner desk as hers. The desktop was more or less tidy — Friday had been a slow day, time for her to clean up. The bulletin board behind her held a calendar, a few Dilbert cartoons, a postcard her sister Cindy had sent her from Niagara Falls. Jennifer set her mug down and turned on the computer. She settled into her chair, with neither resignation nor enthusiasm. How had she described the job to Cindy?
The career path of least resistance.
Still, it paid fairly well and the benefits were good. What else could she ask for?

10:17 a.m., and Jennifer was on her way to the photocopier when she heard Carrie’s voice. Jennifer smiled; she could take or leave most of her coworkers, but she liked Carrie, always had. “Hi, Carrie. How was your weekend?”

Carrie shrugged. “Got stood up. Again.”

Carrie grinned. She was a buxom type in her late forties, determined to live life as a blonde, and always ready to share her dating stories. “Don’t worry about it. I smelled this guy would be trouble the moment I met him. Literally. He bathed, I kid you not,
bathed
in Canoe aftershave.”

“At least it wasn’t Aqua Velva.”

“Thank God for small favors. Speaking of getting stood up, the copier guy didn’t come by Friday.”

“You’re kidding. The machine’s still down?”

Carrie nodded. “Only one still working is all the way over in HR.”

Jennifer rolled her eyes. “One of those days. Guess I’m off to HR.”

“Have fun. Be sure to leave a trail of breadcrumbs.”

Jennifer started down the hall, then turned back to Carrie. “Do you want to go out for lunch today? I didn’t have time to pack anything. There’s that new sushi place.”

“OK. See you then.” Jennifer gave Carrie a little wave, and walked down the hall to HR. She never saw Carrie again.

There was no line for the copier, and the papers didn’t jam once. Her luck
was
holding, Jennifer mused as she started back down the hall, though it would have been better if the damn copier repair guy had shown up. Still, she couldn’t —

The floor trembled and she stopped, had just enough time to think
Earthquake?
and wonder where the nearest doorway was when the entire building shook madly, whipsawed back and forth. She was on the floor, papers scattered around her, as the building shuddered and rattled. There was a roar, a giant’s bellow. She heard screams from the halls and offices, knew that she herself must be screaming but she could not hear it, could only feel her throat burn with the force of the cry. Overhead the fluorescent lights popped and broke, glass and plastic rained down, and now chunks of plaster and acoustic ceiling tiles joined the deluge. Jennifer curled up into a ball, hands covering her head, arms covering her face, feeling her breath on her forearms but still not hearing herself scream.

The building gave one last shudder and silence fell. No doubt there was more sound, plenty of it, but so deafened was Jennifer that she heard nothing. She felt cool air on her forearms and head. She pulled her arms away from her face but dared not open her eyes yet. There was light on the other side of her closed lids, more light than there should have been. She told her eyes to open but they would not obey at first. Finally she jerked her head and her eyes opened.

For twenty feet in front of her the hallway continued on. Full of plaster and ceiling tiles and bad art, but it was there. Beyond that, open air, the sky, an eighteen-story view of Los Angeles. Half the building had been torn away. Bits and pieces still fell past the gaping hole she looked out of. A live electric cable twisted in the wind, an angry snake spitting sparks. Office paper drifted down like oversize confetti, incongruously festive.

Jennifer’s eyes saw it but her brain was numb, unable to take it in. What had happened? It was unreal. Buildings simply did not split in two, leave you staring out a hole at eighteen stories of sky and the city below. It simply could not be —

She heard a scream and a man plunged past the hole in the building and kept going. Even through the ringing in her ears she could hear his scream, diminishing as he fell to whatever wreckage lay below. Another cry, this one words instead of a scream, a man’s shout of, “Jesus God!” and he was falling, like the first man, from the nineteenth or twentieth floor. He was flailing instinctively, somehow caught hold of something, and dangled there in front of Jennifer.

She wanted to help him but could not move; he did not ask for help, only stared fixedly. He began to shake, then jitter wildly, and Jennifer saw that he had caught hold of the electrical cable, his hands frozen in a death grip as the voltage coursed through him. She was transfixed, unable to look away as he jittered and shook; she hoped he was dead already, that he was not alive to feel his hair and clothes burst into flame.

Only when the smell of him burning reached her did she break her paralysis. She scrambled to her feet and fled from the burning man, from that dreadful hole in the building, looking for something or someone that would explain what was going on. She ran around the corner and right into Mr. Danvers, the department vice president. There was a cut across his head and blood in his hair but he was calm. He grabbed her by the shoulders, shook her. “Jennifer!” he yelled. “Come on, Jennifer! Are you OK?”

For a moment she could not find her voice. At last she croaked, “I think so there’s this man there he burnt up and what’s going on?”

He shook her again. “It’s a bomb or something. We’ve got to get out of here. I’m going to go see if I can find anybody else, you go on. Get out of the building, fast as you can.”

Automatically she started toward the elevator. He grabbed her by the arm and pulled her back. “No, the stairs, take the stairs. Just run, keep going.”

Jennifer watched him run down the hall and soon he was gone, disappearing into a cloud of dust. She stood for a moment, unsure of what to do, and now she could hear things. Screams and moans. Crumbling plaster and breaking glass. And a deep groaning — the sound of a building that had taken more damage than it could stand, was ready to come down.

Get out. Fast.
She could do that. Could she?

Jennifer ran for the stairs. Just before she reached the stairwell she passed by a conference room and for a moment stopped, looked in. The walls of the conference room had been glass, and the people inside had been cut to ribbons. They lay bloody and silent amid their coffee cups and meeting notes. She recognized a few of them. Some their own mothers would not have recognized. She stood and stared. It couldn’t be real, couldn’t. They were filming a movie or something, she must have missed the memo. Soon the director would yell
Cut!
and all these people would get up and wash off the fake blood and everyone would have some donuts and she could get Bruce Willis’ autograph.

Dark Confluence by Rosemary Fryth, Frankie Sutton
Swimming Without a Net by MaryJanice Davidson
Vampiric by J A Fielding
Between Hope & the Highway by Charissa Stastny
VC03 - Mortal Grace by Edward Stewart
Wonderful Life: The Burgess Shale and the Nature of History by Stephen Jay Gould
The Yellow World by Albert Espinosa
Stiletto Safari by Metz, Kate
Panties for Sale by York, Mattie
The Circus by James Craig