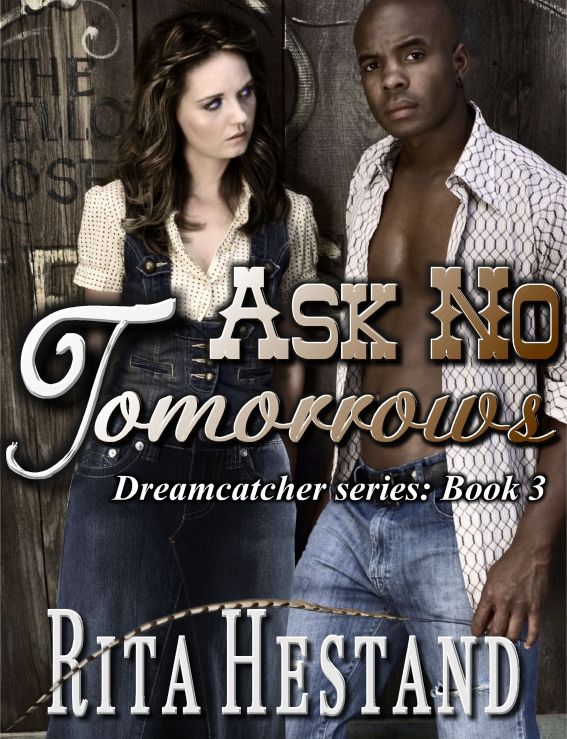 This book is licensed for your personal
enjoyment only. It may not be copied or reproduced in any manner
without express written permission of the author. If you would like
to share this book with another person, please purchase an
additional copy or copies. If you did not purchase this book or it
was not purchased for your use, please go to Smashwords.com to
purchase your personal copy. Thank you for respecting the hard work
of this author.

Ask No Tomorrows
is a work of fiction. Though some of the cities
and towns actually exist they are used in a fictitious manner for
purposes of this work. All characters are works of fiction and any
names or characteristics similar to any person past, present or
future are coincidental.

Other books available by this
author:

Beyond the Dream Catcher

Better Off Without Her

Suspicions of the Heart

Heart of the Wild

The Far Side of Lonesome

{Also available by this
author are children’s books at Smashwords.com}

True love comes in many sizes, shapes
and colors. Ask No Tomorrows is dedicated to all those who have
sought love in different places and found it. Stand strong, stand
true as love is the most powerful emotion of all. And remember true
love is worth fighting for.

The bullet
whizzed by Riley Morgan’s right ear and she clamped her mouth to
keep from screaming aloud, as her heartbeat quickened. Her last
breath hung in the excessive heat as the smoke began to clear. She
didn’t lower her arm until she was sure there would be no more
shooting. Any movement would be noticeable, she was sure. Had she
turned her head in the slightest she’d be dead now!

“
Want her alive or dead?” Jarvis McKnight asked, holstering his
gun, as he threw a dishtowel over his shoulder.

“
Dead. As far as I’m concerned she’s not pretty enough to bed,
smart enough to use, so I put no value on her, and if she’s dead,
less trouble for us,” Harry announced boldly.

“
I
ain’t sweet on her or nothin’ but she ain’t a bad cook, she outdone
herself with breakfast, and at least I didn’t have to cook this
mornin’. But…I guess I was wrong, ‘cause I thought you was a little
sweet on her when you first come.”

“
Sweet on her? Don’t you think I got better taste than that?
Why, I bet she ain’t even been kissed, nor knows how.”

“
You’re probably right about that. Who’d want
her
?” The cook and all-around handyman of the
ranch nodded and headed for the barn. She heard him picking out a
horse and mounting in the creaking saddle. Then the stir of horse
hoofs as he rode out of the barn toward the dusty road, sending
straw and dust flying and had Riley scrunching down into the weeds
again.

My
God
, Harry just
asked me to marry him, and now he aims to kill me!

She
peeked through the tall grasses and bushes. She
didn
’t see anyone
now. She peered about the place, only lonely scrubs stretching for
the sky and cattails standing majestically against a glaring sun,
like burned-out corn stalks. She stared at the monotonous winding
road swept by the wind itself, uncluttered by humans or
animals.

Sweat dripped,
stinging her eyes like a bee gone loco. She used her shirttail to
wipe her eyes.

A chill ran
through Riley as she curled herself about the tall weeds and
cumbersome bristles of a fir tree planted too close to the barn.
She’d asked the hands to hoe down the weeds around it a month ago,
but no one had attended to the task. Now she was
grateful.

Her dark hair
fell into her eyes, as she absently pushed it away from her face
and took the ribbon she had wrapped around her wrist to tie it back
with. She glanced down at herself and grimaced. No one would know
she was one of the richest women this side of the Red River by the
looks of her now. Dressed in pants and broadcloth shirt, she looked
like a homeless waif, and her sweat-rimmed working hat added to her
tramp-like appearance.

How could this
be happening? She’d woken up in the best of moods this morning,
everything had been fine, she’d gotten up early to feed the stock
and make breakfast for the ranch hands. She’d outdone herself
cooking a feast for the hands; pancakes, bacon, eggs and sausage,
with no thank you’s for the task well done. As usual for the first
of the month, she then busied herself figuring her monthly budget
and her deposit for the bank, now she was dodging bullets from her
foreman of three years, a man she had once trusted. Thank God, she
had slipped the money into her small purse to take to the bank this
morning, a sizable sum since the selling of her cattle, otherwise
she wouldn’t have a penny to her name. Somehow she had to get to
town, get to the bank and escape her foreman without being killed
in the process.

She bit her
lip. Maybe escape should be foremost on her mind at the moment. The
bank trip could wait for a better day. The insult that she hadn’t
once suspected Harry bothered her greatly. Usually she was a good
judge of character. However, the last hours made her
wonder.

Disciplined by
a strict unyielding father, she gathered her wits about her now. At
the moment, survival was the most important thing. She needed to
remember everything her dad had taught her about surviving. Just
then, a baby polecat sauntered slowly in front of her. She held her
breath, thankful it was on its way to join its mother just past the
corral.

Since her father’s untimely death, Riley had taken over the
ranch smoothly without a problem. Now, suddenly, she wasn’t sure
who she could trust,
if
she could
trust anyone. Harry had hired most of the men. Only Old Gordy had
been on the ranch for the past twenty years and she knew without a
doubt she could trust him, if he was still alive. She hadn’t seen
him at breakfast.

The irony was
this morning she’d thought about giving her foreman a raise for
saving her money with the selling of the herd. Yet, only an hour
ago he proposed, and almost in the same breath threatened to kill
her. The most ironic thing about this morning was his proposal.
When she nearly laughed in his face, he quickly turned
violent.

Shocked by his
flirtation, she scoffed at his lame attempt. How could he possibly
think she would take him seriously? He’d never given any indication
that she was of the least interest to him. No man on the ranch
had.

Riley refused
to go back east to school, and so she became her father’s top ranch
hand. She could have been invisible as far as most of the men were
concerned, as her father had been swift to issue a hands-off. So to
pretend an interest was a novel idea for Riley.

Living in a
realistic world most of the time, Riley accepted herself as plain
and unappealing to men. Her father reminded her many times. That’s
why Harry’s unexpected flirting this morning shocked
her.

Riley bit her
lip again, this time so hard the blood ran. Determined not to think
on it this morning, she had other worries bearing down on
her.

With Harry
Stevens breathing down her neck, wanting to kill her and take her
ranch, she couldn’t allow herself the luxury of feeling sorry for
herself. Besides, she’d gotten past that point. Survival took first
place now.

Had Harry
planned this take-over all along? Had he merely been biding his
time until he was ready to spring it on her? Yes, that figured. How
had it escaped her? She was no fool.

Her father
raised the accusation that most of the young men about would be
more interested in the land and the money than her. Harry never
showed a moment’s interest in her ‘til her father died and she
should have seen the change coming. Although, the way he spoke to
the deputy that occasionally rode out from Waco, she would never
expect Harry to propose.

Funny, when
she thought of it, no one had questioned her authority three months
ago when her father first died. The usual sympathies had been
offered. The entire event had run so smoothly even she questioned
it. She’d taken over the controls of the ranch without the
slightest problem. Naturally her father’s will was recorded by his
lawyer, but no one seemed to have any objection, even though she
had inherited one of the biggest spreads in Texas. Obviously some
had bided their time. Her foreman, the cook, and several of the
hands had taken up the gun when Harry had hollered for them.
Obviously they had planned the take-over of her ranch, and figured
they could kill her as easy as anything. After all, who would
notice? She had few friends in the community, and only one close
friend who lived several miles on the other side of her property
which she rarely had time to visit.

She’d barely
escaped to her room when Harry pulled his gun, but she’d rushed
into her room and locked the door. She then hurriedly changed
clothes and disguised herself as one of the hands as he banged on
the door and demanded she come out. Finally, the banging stopped,
but Riley soon realized Harry was waiting for her by the door. She
escaped out the window, falling to the ground with a heavy thud.
She knew she was bruised by the soreness when she moved about. She
couldn’t give in to that.

However,
escaping hadn’t helped much; the cook fired on her as soon as she
hit the ground, and one of the younger hands chased her until she
nearly keeled over from exhaustion. She ran in circles for almost
an hour trying to escape them all. She tried to calm her racing
heart. What was she going to do? For the first time in her life,
she had to think, she had to act, and fast.

Harry was a
good shot and he aimed to kill her.

Riley weighed
her options. Options? What options? She had to get away and fast or
she’d be history. These men weren’t playing around and now they’d
acted on their plans they couldn’t turn back from.

Gravity Brings Me Down by Natale Ghent
Under the Moon by Natalie J. Damschroder
The Other Side of Silence by Celia Ashley
The Crow King's Wife by Melissa Myers
Warrior Mage (Book 1) by Lindsay Buroker
Just a Fling by Olivia Noble
The Inspector-General of Misconception by Frank Moorhouse
B00BKLL1XI EBOK by Greg Fish
Saved Folk in the House by Sonnie Beverly
The Enthusiast by Charlie Haas