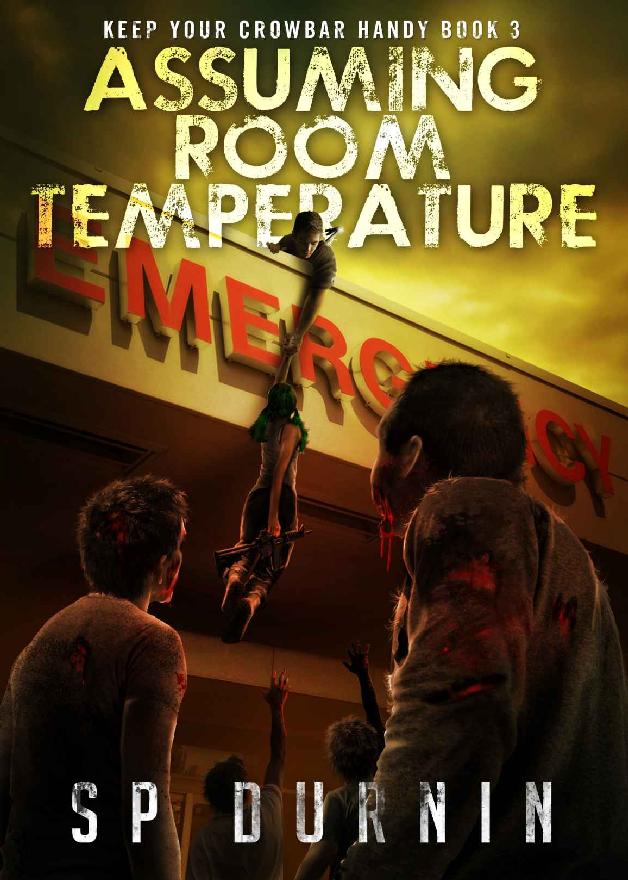 “S.P. Durnin’s masterful storytelling and well developed characters pull you in from the first chapter, grabbing you by the throat and holding your attention to the very last sentence. Fiction this powerful is nothing short of addicting!”

and
ZOMBIE ATTACK!: RISE OF THE HORDE

“
Assuming Room Temperature
is a rousing good tale. S.P. Durnin takes you on a wild ride at high speed into the aftermath of a zombie apocalypse. You’ll fall in love with the characters, and there’s someone for everybody. I highly recommend the novels in this delightful series!”

-Sean Liebling, author of
BLOOD, BRAINS AND BULLETS
and
THE REAPER: NO MERCY

“Durnin pulls no punches in this thrill ride through the apocalypse!”

-Jason Brant, author of
ASH
and
THE HUNGER TRILOGY: DEVOURED
,
CONSUMED
, and
RAVAGED
.

PRAISE FOR BOOKS ONE AND TWO
THE CROWBAR CHRONICLES:

KEEP YOUR CROWBAR HANDY and
ROTTING TO THE CORE

“S.P. Durnin is a unique voice in the world of horror… will leave you wanting more! Well written and well-paced, you won’t be able to put it down!”

“…There’s a reason the characters, and the reader, will want to keep that crowbar handy!”

“
Keep Your Crowbar Handy
is a rollercoaster ride of action, adventure, suspense, horror, gore, and personal relationships at the end of the world as we know it. If this is only the first book in the series then hold on to your socks, the rest will blow them off!”

-James Jackson, survival instructor/weapons advisor,
and author of
UP FROM THE DEPTHS

“S.P. Durnin manages to bring a shining light into the quivering darkness of the apocalypse!”

“…The humor is great, the survivors are fun to follow, and each truly speaks with a voice of their own.”

“I found myself hooked into the book early on and kept getting mad that I had to stop reading it to do things like work my day job, sleep, and tend to other annoying but necessary interruptions.”

“…A high-action story of survival, love, betrayal and sacrifice. If you enjoy the zombie genre, they you’ll definitely enjoy this book!”

-Patrick S. Dorazio, author of
COMES THE DARK,
INTO THE DARK,
and
BEYOND THE DARK

“…S.P. Durnin takes you on a wild ride through the zombie apocalypse, all the while showing us both the best and the worst in people. If you like zombies, you will love this book!”

-Cedric Nye, author of
THE ROAD TO HELL IS PAVED
WITH ZOMBIES

No part of this book may be reproduced, stored in a retrieval system, or transmitted by any means without the written permission of the author and publisher.

Book One:
Keep Your Crowbar Handy

Book Two
: Rotting to the Core

As we prepare to go a-riding “Down, down into the valley of death” once more with the third novel of the KYCH series, I again need to thank some folks even though they likely already know Who They Are. Those who, through advice, inspiration and encouragement (which sometimes entails putting a swift boot upside my butt cheek), keep that crowbar swinging.

Special thanks goes out to my Beta (reader) Corps. Keith (Jitterfreak!) Rogers, Anthony (X) Masten, and Leslie B. Foster. (See? Told ya’ you’d make it into the book kid.)

Lastly (and certainly not least) thank you to my Better Half. Not simply because she’s the buxom, intelligent Ginger which haunts every Irishman’s dreams, but because she’s able to quiet the horrors that reside in the deepest, darkest, most terrifying corners of my back-brain.

Even the ones that scare the shit out of me…

People used to like to bitch about lots of stuff.

Anything and everything it seemed.

They’d bitch about how they couldn’t “connect” or “relate” to their spouses, or how their kids were flunking summer school. They’d carp about their neighbors, the ones who let their rat-sized dogs crap in everyone’s yards and would never pick up after the precious, yipping, beanie-baby sized, little ankle-biters. They’d complain about their jobs and how their boss was a two-faced, back-stabbing asshole. About their never ending workload and how they would never be recognized for their efforts. They’d whine about not being able to afford the newest model of whatever “Eco-friendly”, bubble-mobile they drove around in, or about how they hadn’t bought that soft-tail Harley to make themselves feel better during their mid-life crisis. They’d get upset if someone expressed a different opinion on religion, culture... hell, even on what to eat for dinner. The question “Pizza or tacos?” caused plenty of marital spats, I’m sure.

But that was before. Before everyday life went totally nuts. Before surviving to see another sunrise and keeping the people you cared about safe became the only thing you really had any time to worry about.

Before the dead started rising.

Over the span of 24 hours, the United States (along with the rest of the world) went totally bat-shit. That’s because for some unknown reason, the dead started getting back up and eating the living. The “infected” were suddenly everywhere. Walking through the streets, shambling around in the parks, coming through your dining room window. The Higher Ups (I.E. the government) were caught hopelessly unprepared, proving (as we’ve always suspected, really) that they actually were that dumb. Attacks became riots, which in elevated to pitched battles. Those turned into running fights as greater and greater numbers of the dead began overwhelming every defense the living tried to mount, forcing what was left of the American people to flee west. The slaughter that followed was beyond anything previously seen by man. An honest to God “extinction level event” that pretty much ended civilization as we knew it, as a new life-form (or an un-living form of life) began to take possession of the planet. Those of us left behind as humanity fled the cities had to learn how fight the creatures successfully by ourselves. “Two in the head, dead.” to quote a wise, wise man. I’m pretty sure we all owe Romero and Savini big time for that one.

It’s what we’re doing to the nasty things, when we can. We’re still fighting, still surviving, even though we’ve lost people near and dear to us along the way.

That said, I’ve been thinking a lot about the things I miss.

I miss waking up in the city, hearing the traffic outside and seeing familiar people when I’d go for a run. I miss working out at the dojo. I’m almost positive my instructor Sensei Takahashi is fine. I sure he made it to safety without much difficulty at all. Heck, he’s probably out west somewhere already, teaching soldiers how to “Open can of whoop ass on ugly fool with big mouth and no brain.” as he always said. Heh-heh! When he talked, he sounded just like an old Kung-Fu movie master. I always thought that was so cool...

I miss music and clubbing on the weekends. No scratch that. I miss music and dancing at clubs on the weekends. I really miss that. Laurel could sing. Me? I never tried. Just too self conscious that I might sound like George if I did, you know? Like a pit bull gargling gravel? But I loved to dance. Thank you mom, for all the martial arts lessons. Gives you a great sense of timing and balance for when you wanna shake your booty.

I miss shopping. Damn, do I ever! I always used to go to Polaris or Easton on Saturday mornings. I’d have a bite at Cinnabon (guilty pleasure), roam through the stores for cool Anime tees I could make into belly shirts and Hello Kitty stuff (Yes, okay? I like Hello Kitty. Shut up.), check Vickey’s for new naughty-wear, get a coffee and a book or two at Barnes and Noble. Maybe have some ice cream.

I’d kill for some double-chocolate fudge and cookie dough ice cream on a waffle cone.

I miss music stores. The smaller places that have current, bass-heavy club music (only for dancing, not really for listening), along with good stuff like Billy and the Boingers, Kisida Kyodan and the Akebosi Rockets, Concrete Blonde, John Lee Hooker, Deathtongue, Loreena McKinnitt.

Laurel used to sing a few of her songs...

Dammit, now I’m getting all depressed. Why did I agree with Jake when he asked us to start these journals? I hate thinking about that day. It was bad enough we lost Donna and Karen, but-...

Okay. Not gonna think about that. Nope, nope, nope. You can’t make me.

I have to admit something here.

If you’d told me I’d be doing this six months ago? I’d have said you were out of your mind. Or at least in need of some quality time on a psychologist’s couch.

Anyway. Right now we’re still attempting to make our way to the (questionable) safety the western quarter of the United States is rumored to provide and, let me tell you, it’s been almost No Fun At All. Man-eating creatures, psycho hillbillies, murderous white supremacists?

Been there, done that, have the goop-smeared t-shirt.

That’s something people never took into account before the Zombie Apocalypse, you know? The goop. Exploding (or decapitated) heads tend to cover you in all kinds of yuck in close quarters. Totally gross. As if the smell isn’t bad enough...

And did you know zombies all smell like poo? They do. I guess when you die, the first thing you do is crap your pants as your bowels let go.

Yeah, I know right? Ew! Yet another piece of information I didn’t need to know either.

If you ever find yourself hip-deep in a Doomsday scenario? Stock up on baby-wipes.

Seriously. Baby wipes are your friend. Not only can they be used for toilet paper, they’re great for cleaning off zombie goop, and even getting rid of that “on the road for 6 days straight” body funk when you don’t have access to a shower.

-above excerpts taken from the A.Z. (after-zombie) bestselling journal of Katherine Brightfeather Cho entitled:
Self Defense, Weaponry, and Must-Know Post-Apocalyptic Fashion Tips for the Modern Ninja-girl”