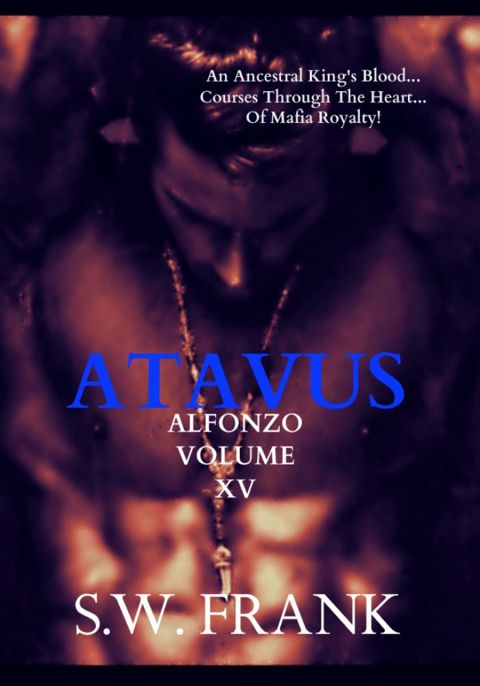 No parts of this book may be reproduced, stored in a retrieval system in any form without prior written permission of the author. Piracy of the book is a crime. Alfonzo detests thieves and liars, he also believes in Karma. Sometimes it is not laws which govern a person, it is what a person does when nobody watches which reveals their character and is the act of self-governance.

This is a work of fiction. The characters, incidents and events portrayed in this story are not to be construed as real. Any resemblance to any actual persons, living or dead is entirely coincidental.

Graphic images are for illustrative purposes only.

“What passes for identity in America is a series of myths about one’s heroic ancestors. It’s astounding to me, for example, that so many people really seem to believe that the country was founded by a band of heroes who wanted to be free. That happens not to be true. What happened was that some people left Europe because they couldn’t stay there any longer and had to go someplace else to make it. They were hungry, they were poor, they were convicts.”

“If you think that nobility consists of having sixteen ancestors rather than merit, great Prince, then you may—and you may also praise or condemn me.”

“...I write to keep in contact with our ancestors and to spread truth to people.”

“The reverence for the deeds of our ancestors is a treacherous sentiment. Their merit was not to reverence the old, but to honor the present moment; and we falsely make them excuses of the very habit which they hated and defied.”

To my ancestors, my family and the dearly departed as I have written this volume, my heart will always remember your beautiful essence. A hug is extended to the readers who have discovered the tale and those who have read Volume I of Alfonzo and stayed ever since. I herald all of you, including the artists and talented musicians. Thanks for sharing your talents with the world…bravo!

Mirriam-Webster Definition: an ancestor or ancestral type from which a character is assumed to be inherited, a great great grandfather, etc.

“Man is physically as well as metaphysically a thing of shreds and patches, borrowed unequally from good and bad ancestors, and a misfit from the start.”

The heat was at his back, Vitamin D from the sun soaking into the golden skin cut, marred and tatted. The entire Giacanti clan had converged on African soil, some with smiles and others with downcast lips. Dons and their Donnas sought to make sense of the long feuds that shortened their bloodline. They were here in celebration of Nicolo Giacanti’s 98th birthday.

For an elderly man, his blue eyes were clear. His forehead wrinkled in contrast to the taut skin around the neck and cheeks. An ice cap mountain of white was his hair, and the fiery spirit of a Giacanti breathed in the air.

He watched a family of regal descendants, great grandsons and great-great grandchildren of his brother. Teeth which chewed bani and hasema were lined in a wide smile. The years of secret exile were past. An old man was free. This seb’ay had overcome the worst of trials. He was proud. A strong aged hand balled into a fist to grind to his libi –heart.

The youngest leader, with the semayawi colored eyes more brilliant than his brother’s was fierce but loving.

Alfonzo walked to where the eldest living Giacanti reclined in a weathered bamboo seat. What an old man observed was something in the blue eyes that craved knowledge, perhaps he was tired, the great warrior who in ancient days may have been a gladiator, conquistador or tribal leader. Wise beyond his age and a king in all respects in the world where chivalry and love were dying.

“Selam.” Alfonzo greeted with the Tigrinya word for hello he recently learned.

Alfonzo’s forehead wrinkled. Hello is all he knew and megbi, which meant food and oh yeah, happy birthday. “Zibug lidet!”

“Yes, and many other languages equally. To live in a world of many tongues, it is a handicap to speak only one.”

Elder Nicolo tapped the tome sitting on his lap. It was as fat as a dictionary. “Today, we not only celebrate the day of my birth, we will also honor our ancestors.” He opened the book and in a commanding voice shouted, “Abahago, ahabaga, abo, ade, wedi, gual, amo, hatne, amitche and gorebet –come. It is the hour to learn of your ancestors.”

He looked at the brown woman holding the hands of her children, the one with hazel and walnut colors in her eyes. That one, was not aware of her heritage, she was lost.

There is wisdom gained in life. How does someone understand their purpose if they lack knowledge about their ancestors?

Today, she will hear of her people as well, an ancient tribe of Ethiopians who once ruled long before popular religions. Today as he opened the large book, he took satisfaction that the recordings carefully chronicled with his hand would bring her peace. “Rhus,” he smiled as the large assembly took seats upon the sand. Today they would hear on the wind, songs and the forceful drums of their ancestors. They will hear not rumors but the words of the living that experienced and observed. These were the chronicles of Nicolo Giacanti; he had lived to see this glorious day.

The royal bloodlines survived. They sat quietly, except that one –Aldonza, who asked many questions until her parents shushed her. An old man smiled, because her elder brother with an owl’s attention sat patiently. Salvatore, ‘Sal’, is the affectionate name of the youth with the temperament of a wise person.

The old man smiled and then resumed the story, aware of Giuseppe who had stretched out on a blanket with his son and fallen asleep under the rays. His snores were background music as tales of travel from Sicily to Africa entertained an attentive audience.

Soon, the children fell asleep when the yellow orb in the sky retired. However, he continued to speak to the adults, reminiscing as the men and women drank. His eyes were distant, time had preserved him for this day, but he tired, after telling the lost one her heritage and passed the thick book to her husband, Alfonzo. “I am too old…and tired. I give this to you for safekeeping to tell the generations.” He then pointed to Nico, the one named after him. “Assist me to my room, young Nicolo.”

Nico reluctantly obliged. He cut an eye at Giuseppe and the others nearby, including his sons reclining on hammocks. Hell, Alfonzo was right in front of him, holding that book the size of a dictionary. Nico surmised the old man needed a word in private. The ruse wasn’t very subtle, however Nico played along.

Without complaint, Nico rose from his comfortable spot with Ari and helped the patriarch to his feet. His fingers gripped the loose skin, too soft for a man and thin.

They walked slowly. A wave came and the moist sand clung to their toes as shadows danced with licking flames of a bonfire that had just begun.

“I haven’t felt old until now,” the elder Giacanti commented as they trudged through grit.

“The mind sometimes rebels against what we already know.”

There was a wry grin. “You are pragmatic, like my father.”

The pair crossed the beach, feeble steps and strong strides were movements of the living.

Nico held the elbow of his elder with a firm palm, patiently waiting as he climbed one slate and then the others to the rear entry of the sturdy villa. The old man didn’t peer at the armed security; their presence had become the shadows of his former life. They entered a Spartan kitchen with modern appliances found only in homes of Eritrea’s wealthiest residents.

The former broken government and infrastructure had experienced a burst of revitalization in part to foreign investments after the ousting of a corrupt Prime Minister.

“Ah, it has been a long day.” The senior commented when he halt to rest his bones on the kitchen counter.

Nico nodded his agreement and crossed his arms over his broad chest. The man would speak his mind hopefully –soon. He and Ari were in the midst of an important discussion about Darren going to the university as planned when the subject of Bianca arose. Bianca was due any day and Nico wanted to be present for the birth, however Ari was not okay with the decision, saying he’d already seen enough of Bianca’s pussy.

“There is something that you must know about our family.”

“Yeah, like what?” Nico scoffed. He had suspected a motive and he wanted the crafty old man to get to the point. Alberti had often worked his nerve with his riddles and manipulations.

The old man leaned forward and spoke in a conspiratorial tone.

Nico grumbled in distress at what he heard. The family had experienced enough drama and it seemed the saga was never-ending. Alberti had mentioned something similar, less explicit, before his death and Nico never repeated the rumors to anyone. There wasn’t any proof, just Alberti’s cryptic riddles about chess being the game of life, played by masters.

The family was destined to have strife, despite their desire for a peaceable life if all this nonsense was true. His brows furrowed in anger because he grew weary of half-truths and lies. “What –cosa? You speak this to me without any proof, besides generations forget. Not everyone aspires to be like those old time gangsters.”

Know the Night by Maria Mutch
Princess Charming by Nicole Jordan
A Husband for the Holidays (Made For Matrimony 1) by Ami Weaver
Murder Under the Tree by Bernhardt, Susan
Baby Love by Catherine Anderson
Queen by Sharon Sala
Blame It on the Fruitcake by Pat Henshaw
Shotgun Bride by Linda Lael Miller
Guilt by Elle, Leen
Rain Gods by James Lee Burke