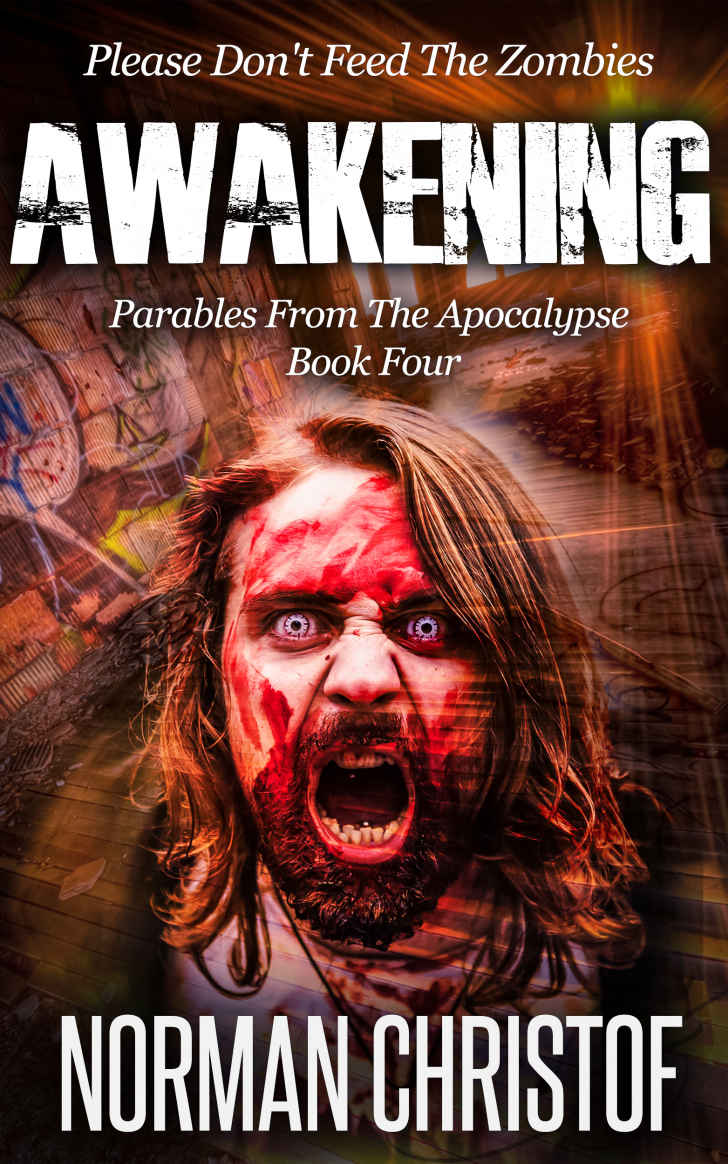 Parables From The Apocalypse Book Four

This is a work of fiction. If you find any similarities to real people, places, events or planets you're sadly mistaken.

No part of this publication may be copied, reproduced in any format, by any means, electronic or otherwise, without prior consent from the copyright owner and publisher of this book.

Parables From The Apocalypse

Three Zombies and A Dinghy

Killing It at the Club

A Difference of Opinion

Prelude to a Kill

It hurts.  Every fiber of my body hurts like hell.  What the frig happened to me, and why can’t I remember a thing?  Damn, everything hurts so much.  It feels like I’ve been run over by a transport truck.  I need to get up and open my eyes.  Need to find some pain killers.  This is just too much to take.  Where the hell am I?  This feels so much like a dream.  It’s like one of those dreams where you’re trying  to get away from a pack of freaks, but your legs move slower the harder you try
.
The freaks are gaining, and there’s nothing you can do to make your muscles move any faster.  They’ve got a fifty-miles-per-hour tail wind, and your feet are moving through wet cement.  I’ve got to get moving.

Chaz was lying flat out on his back.  He tried to roll over, but his muscles wouldn’t respond.  He felt like something was pushing him back down.
Why can’t I roll over?  Is this what it feels like to be paralyzed?  Why can’t I get up?  I must just be disoriented.  Who knows how long I’ve been lying here.  Just take a minute, and collect yourself.  You’ve obviously been through some sort of trauma.  You just need to get more strength, then you’ll be able to get up.  Maybe something’s broken—maybe I broke my back.
Chaz tried wiggling his toes and his fingers.
Well, that worked. I can move a little.  My back can’t be broken.  I’ve seen guys paralyzed before, and they thought they could move their fingers and toes, but really they couldn’t.  It was all in their mind.  Maybe this is just in my mind as well.  Maybe I really am paralyzed.
He tried tugging at his pants with his fingers.
That worked, I could feel that in my legs. I could feel my pants rubbing against my legs.  There, I must be alright, I could feel that.  I just need to relax.  Don’t panic, Chaz, we’re still here.  We still have a chance.  I don’t know what the hell is wrong or where I am, but if I still have a breath in me, I’m not beaten.

Think for a minute about what you can remember.  If I can think about where I was last, maybe I’ll figure out where I am now.  That’s the key here.  Stop letting your mind play tricks on you, and focus on what you know.  OK.  Last thing I remember was getting the hell out of Fort Knox with Christa and Alex.  I remember fighting our way out.  We had that psycho doctor as a hostage, and eventually we made it to the front door.  That place was a freak show, what with Patient Zero carved up into tanks in the lab.  That was too much.  I remember all the freaks outside.  When we got outside things got really crazy.  At first all the freaks kept their distance.  They didn’t run, they hung back.  They didn’t want to, but it was like something was pushing them away.  It had to have been Christa.  She was keeping us safe.  She kept them at bay.  But then a few started coming closer.  Not many, just a few of the braver ones.  The ones that didn’t seem quite so far gone.  We fought them off for a while, but then I remember Christa didn’t look so good.  She’d been locked up in that lab for too long.  They kept her alive but weak because they were afraid of her.  Everything after that gets pretty foggy.  Like a dream again.  I remember fighting, but I think we got overwhelmed.  I remember Alex fighting like a madman.  He’d always do anything to protect the girl.  Hell, for that matter, he’d have done anything to protect me.  Not sure why.

Chaz tried rolling over again but with little success.  He got further, but something kept holding him back.  He tried once more, and realized his shoulder was being held back.
Am I hitting something?  What’s holding me back?
He strained his neck to raise his head higher and get a closer look at what was above him.  He felt his hair and then his head come into contact with something.  Squinting his eyes in the dark and focusing as much as he could, all he could see was a flat surface.
Is that the ceiling?  Why is the ceiling so close to my face?  Why am I so close to the ceiling?  Damn, that’s not the ceiling.  I’m in a frigging box.  What the fuck am I doing in a box?  Is it really a box?  It’s soft on the bottom.  Why is it so soft?

Chaz tried yelling, but he could barely get enough air in to make a whimper.  He tried again, sucking in as much air as he could.  Again, he barely got enough to make any noise.  The air tasted stale, and there wasn’t much of it to go around.  He began breathing harder from the panic, like a drowning man trying to suck oxygen from the water.  The harder he tried, the less air he got in.

Damn it, Chaz, get a grip.  Slow down your breathing. C’mon, slow it down.  There’s nothing to be gained from panic.  That’s it, slow down your breathing.
Gradually, Chaz regained control of his breathing.
OK, think about things now.  You’re in a box.  The air is stale.  You can barely move, because the box is confining.  You can’t hear a damn thing, and this thing smells like formaldehyde.  I’m in a damn coffin, is where I am.  I’m in a coffin and I can’t move.  Those bastards frigging buried me alive.  Jesus!  I don’t know which bastards it was, but I’m putting my money on those damn freaks.  The smarter ones.  I’ll bet like hell they did it on purpose, just to torture me for the last few minutes of my life.  Monsters with a brain, that’s all those things are.  Every bit a monster, just friggin’ sick and twisted inside their rotted brains.

For a moment, Chaz just lay there contemplating his situation.  Slowly he breathed in and out, controlling every breath.  He breathed as deep as he could for a count of ten, held the stale air inside his lungs for a count of ten, then breathed out at the same methodical pace.  For almost fifteen minutes he kept breathing slowly in and slowly out.

If I’m going to go, it’s going to be on my terms.  Not in a panic, and not out of control.  I’m Colonel Chaz Sheperd.  I’ve gotten myself out of plenty of tough situations, and I may yet find a way out of this one.  If those brain-addled freaks can rise from the dead, there’s no reason why I can’t.

Chaz focused every bit of strength he had into moving his arms up.
If I can just get my arms moving, then maybe I can lift the damn lid on this coffin.  Maybe they haven’t stuck me in the ground yet.  They probably just drugged me, and that’s why I can’t move.  It’s not the coffin restraining me, it’s got to be drugs.  It’s why I can barely move.  Just focus on one thing.  Get your arms to move.

Chaz struggled for what felt like hours, but was only seconds.  His arms barely budged more than an inch.  He stopped to catch his breath.  He was perspiring heavily, and shaking all over.  Again, he recovered by breathing in and out slowly till he felt under control.  He tried again, but this time with just his right arm.  His arm shook, and pain shot through it from his wrist to his shoulder.  He kept focusing and exerting every bit of energy he had into raising his arm.  The pain increased, and his whole body began to shake, but eventually his arm did move.  At first just a few inches, but then with one last final push his arm broke free into the air.  His arm shot straight up and into the air, and came to a stop above his head.

Oh thank God, I can move again.  Or, at least part of me can move.
Chaz was dripping with sweat, and still shaking.  Happy at first, then realizing that something wasn’t quite right.
Hang on, why didn’t my arm hit the top of the coffin?
He moved his arm easily now, back down and then up again, trying to feel for the coffin lid.  He felt nothing but air.  He felt all around above him, but found nothing substantial to hold on to.
What the hell, that’s not right.

Then, he heard sounds.  Sounds like a door opening, then someone shuffling across a floor, and the clanging of metal.  It was faint, very faint.  Then a voice.  Muddled, but definitely a voice.  It was female.

“Ah, Mr. Sheperd, it looks like you’re finally awake.  Decided you’ve had enough sleep time I suppose.  Oh, and look, you’ve gotten your arm out of your restraints.  You are an eager one, aren’t you?  You know those are there for a reason.  We’re just trying to keep you safe.”

Chaz felt a hand grab hold of his wrist and move it back down to his side.  He tried to resist, but was still too weak from his last exertion.  Once more, his hand felt restrained to his side.  He could barely move it again.

“Don’t worry, Mr. Sheperd.  You’re going to be just fine.  I need to keep you from moving around too much.  You don’t want to hurt yourself now.  After six years of lying in a bed, you’re going to want to take things nice and slow at first.”

Chaz’s mind reeled.
What the hell did she just say?  Six years?
Chaz tried to speak, but only garbled whispers came out.

“Now, what did I just tell you, Mr. Sheperd?  Take it slow.  Just you hang on there one second.  Let me dim the lights, and I’ll get those covers off your eyes.  You should be able see a little better.”

Chaz felt hands around his head, and then some cloth being removed from his head and face.  He squinted his eyes against what little light was in the room.  He was having a hard time making out the objects in the room, but the woman standing close to his bedside and looking down at him was immediately recognizable.

“It’s so nice to have you back in the land of the living, Colonel Sheperd.  They had all given up hope for you years ago, but I had no doubt you’d be back to pay us a visit.  I wouldn’t let them turn the machines off.  No, sir.  I had faith.  I knew you’d be back, and we could spend some time getting to know each other all over again.  I’m not wrong very often, Colonel.  Don’t you agree?  Oh, and one other thing.  I’ve been talking with your wife.”  While Chaz couldn’t react physically, the machines monitoring him showed an increase in heart rate and respiration.  That didn’t stop a smiling Dr. Judith Montgomery from sliding a chair over next to his bed and having a seat.  She glanced up at the machines. “Your wife had virtually the same reaction when I mentioned you.  She’ll be so pleased to hear about your recovery.”