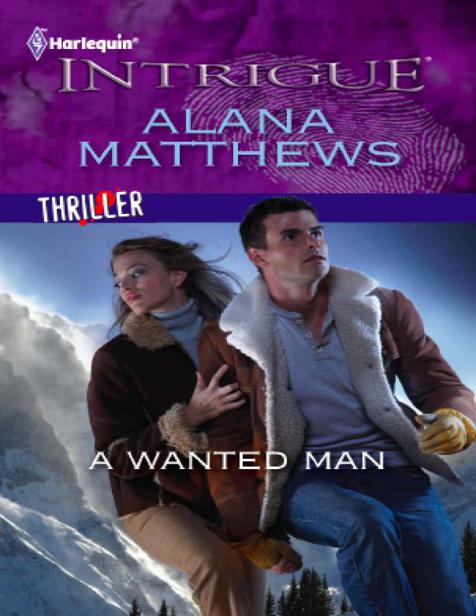 He always got his man... But would he get his woman?

Nothing would stop U.S. Marshal Harlan Cole from capturing an escaped fugitive. Not even being forced to work side by side with his ex-lover, Wyoming Deputy Callie Glass, on a murder investigation. Harlan knows the case will open old wounds, but none as raw as the ones he inflicted on Callie long ago.

Still, establishing an amiable partnership is vital if they are to complete their assignment. But the fury in her eyes and the fever in his blood prove too lethal a combination. The deeper they ride into the mountains on a manhunt, the more Harlan has to protect Callie from the chilling secrets of her past. Sensing the rekindling of an old flame, Harlan establishes one goal: keeping Callie alive long enough to win her back.

Nothing like a brush with death to get your priorities straight.

Callie realized that the decade-old drama between her and Harlan was little more than trivial nonsense. Right now, she had to worry about getting the killers behind bars.

Still, she had to admit that when she’d heard Harlan’s voice calling to her from beyond the rubble of the landslide, the relief she’d felt had been palpable. The sudden fear of losing him had ripped through her like a dark tide.

Did that mean she was still in love with him? So be it. But she couldn't let that interfere with what they’d come here to do.

Harlan seemed to be feeling the same way. He’d gotten quiet again as they rode the trail. He’d taken the lead now, and his focus and determination was a comfort to her.

It was also, she realized as her heartbeat galloped, an undeniable aphrodisiac...

Alana Matthews can’t remember a time when she didn’t want to be a writer. As a child, she was a permanent fixture in her local library, and she soon turned her passion for books into writing short stories, and finally novels. A longtime fan of romance suspense, Alana felt she had no choice but to try her hand at the genre, and she is thrilled to be writing for Harlequin Intrigue. Alana makes her home in a small town near the coast of Southern California, where she spends her time writing, composing music and watching her favorite movies. Send a message to Alana at her website, www.alanamatthews.com.

Deputy Sheriff Callie Glass—
A clue found at the scene of a heinous crime brought her face-to-face with her past.

Deputy U.S. Marshal Harlan Cole—
His mistake could have cost him his life, but instead brought him straight back into Callie’s.

Nana Jean—
Callie’s no-nonsense grandmother, who raised Callie and made no bones about interfering with her love life.

Landry Bickham—
He always had a smile on his face, but behind it was the brain of a reptile.

Deputy Rusty Wilcox—
A deputy training under Callie’s supervision, too often caught in the crossfire when sparks flew between Callie and Harlan.

Gloria Pritchard-Breen—
A bitter, wounded woman who holds a grudge against Callie.

Jonah Pritchard—
A descendant of outlaws who thought the best solution was often one that required a shotgun.

Billy Boy Lyman—
A fugitive from justice who would do anything to keep from being caught.

Megan Prichard-Breen—
A young sociopath who got her kicks running around with bad boys like Billy.

Sheriff Mercer—
A tough boss whose life got tougher when he hit the trail to catch a fugitive.

U.S. Deputy Marshal Harlan Cole sighed and glanced at his prisoner in the rearview mirror. It was one thing after another with this guy, and he was tired of listening to him.

Billy Boy Lyman had spent half the drive moaning about his cuffs being too tight, the cruiser being too cold, then he started blathering on about how the courts and the Marshals Service had him all wrong. That he was an innocent man caught up in something way over his head.

When Harlan reminded him that he’d tried to rob a bank, put a gun in the teller’s face and threatened to pull the trigger, Billy said, “My
partners
were the ones with the guns. I didn’t even wanna
be
there—you know?”

“Uh-huh,” Harlan muttered, then spent the next two hours listening to Billy Boy’s tale of woe, the majority of which was little more than a sorry attempt at justifying the commission of a very serious crime.

Now, true to form, he was making noise about having to “pick a daisy,” as Aunt Maggie used to say.

“Can’t it wait until we get to Torrington?”

“Not unless you wanna be mopping up this backseat.”

Harlan sighed again and looked out at the night sky and the empty road rolling under his headlights. He had picked Lyman up at the Criminal Justice Center in Colorado Springs, after waiting the good part of an hour for the prisoner to be processed. It had been a long day and all he wanted was to get the man squared away, then head to his motel room and go to bed.

He just wished Billy Boy would shut up. A wish that was likely to go unfulfilled.

This all came with the job, of course. Harlan knew that. The U.S. Marshals Service specialized in fugitive retrieval and prisoner transport, and he’d spent a significant amount of his career chauffeuring dimwits from one jail cell to another. He figured he’d probably heard just about every lamebrained excuse a man could come up with for breaking the law, and normally he wasn’t much affected by it. Took it all in stride.

But there was something about Billy Boy that rubbed him the wrong way. The kid couldn’t have been more than twenty-two years old, but he had one of those smirky little faces you just wanted to put a fist in. It took every bit of Harlan’s impulse control to stop himself from pulling to the side of the highway to give the kid a quick tune-up.

On nights like this Harlan wondered if he should’ve taken his father’s advice and found a different line of work. His father had been a career deputy and when Harlan had decided to follow in his footsteps, the old man had groaned.

“You’ve got smarts, boy. Use that big brain of yours to make a difference in the world.”

But Harlan figured he
was
making a difference. There was nothing more satisfying than taking down a fugitive and helping ensure that the world was a better, safer place. It was just that he sometimes felt as if he were little more than a cattle herder. Even if the livestock he dealt with had a dangerous streak.

Not that Billy Boy was all that dangerous. Just annoying. And the sooner he delivered him to the Wyoming Medium Correctional Institution, the happier he’d be.

“Are we gonna make a stop or what?” Billy asked. “And I ain’t talkin’ about the side of the road. I like my privacy, and there’s bound to be a gas station up ahead.”

Harlan glanced at his prisoner in the rearview mirror. “Only on one condition.”

“After you’ve done your business, you shut your yap and keep it shut for the rest of the ride.”

T
HE CONVENIENCE STORE
was one of those all-nighters with a couple of gas pumps out front. It stood just off the highway, the only sign of life in the vicinity, its fluorescent lights so bright you could see them from half a mile away beckoning late night travelers to stop in for a snack, a cup of coffee and a few gallons of gas.

It was close to midnight and Harlan wasn’t surprised to find only a single car parked out front—a battered gray Chevy Malibu he recognized as one that had passed them a few miles back.

Harlan wasn’t fond of making unscheduled stops, but he understood how merciless the call of nature could sometimes be. When he worked long transports like this one, he tended to cut back on his liquid intake, but there wasn’t much he could do about his passenger. It was up to the previous custodian to make sure the prisoner had been properly “fed and bled” before the trip. Yet despite the long processing time, someone back in Colorado Springs had neglected to do his job.

Harlan parked two slots over from the Chevy, then killed the engine and turned, staring at Billy Boy through the grille that separated the front and backseats.

“You’ll wanna watch your step in there. Even a hint of trouble and I
will
shoot you. You understand?”

Lyman smirked. “You ever shot a prisoner before?”

The smirk disappeared. “You got nothing to worry about with me, Marshal. Like I told you, I’m an innocent man.”

Harlan popped his door open and climbed out. Resting the palm of his right hand on the butt of the Glock holstered at his hip, he moved to the back and pulled open the passenger door.