Read "B" Is for Betsy Online

Carolyn Haywood
Illustrated by the author

All rights reserved. No part of this publication may be reproduced
or transmitted in any form or by any means, electronic or mechanical,
including photocopy, recording, or any information storage and
retrieval system, without permission in writing from the publisher.

Requests for permission to make copies of any part of the work
should be mailed to the following address. Permissions Department,
Harcourt, Inc., 6277 Sea Harbor Drive, Orlando, Florida 32887-6777.

"An Odyssey/Harcourt Young Classic."
Sequel. Betsy and Billy.
Summary: Betsy experiences an interesting first year in school
and looks forward to summer vacation at her grandfather's farm.
[1. SchoolsâFiction.] I. Title.

1.Â BETSY GOES TO SCHOOL AND FINDS
A BIG SURPRISEÂ 1

8.Â HOW BETSY WENT TO PICK VIOLETS
AND GOT INTO TROUBLEÂ 82

1 Betsy Goes to School and Finds a Big Surprise 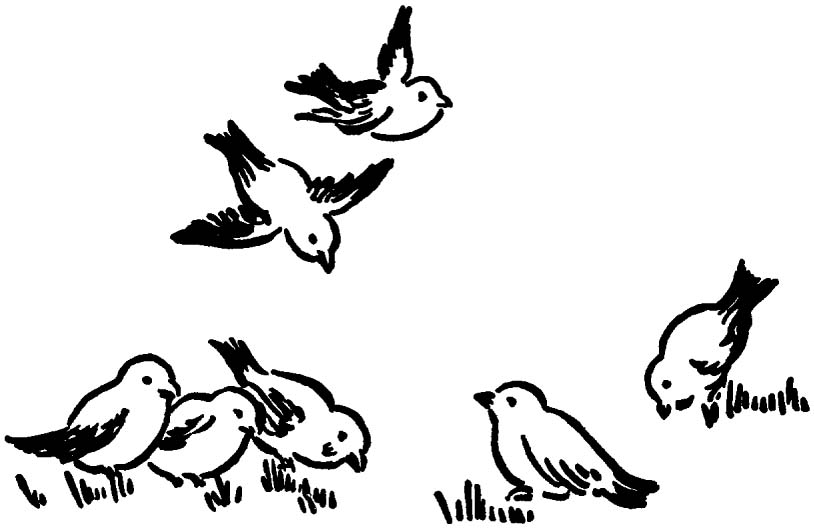 Betsy lay in her little white bed. She had been awake a long time. Outside her window the birds were calling "Good morning" to each other, but Betsy did not hear them.

All summer long she had jumped out of bed as soon as her eyes were open. She had always run to the window and thrown sunflower seeds out to the birds for their breakfast. But this morning Betsy was so busy feeling unhappy that she forgot all about the birds.

Betsy was unhappy because today was the first day of school. She had never been to school and she was sure she would not like it. Old Ned, who cut the grass on Grandfather's farm, had told her all about school. Betsy had never told anyone what Old Ned had told her, but now she lay thinking about it. She thought of the cross old teacher and of the switch that had stood in the corner to be used on the legs of any child who might be late for school. She thought of the high pointed cap made of paper that Old Ned had been made to wear when he didn't know his spelling. Old Ned had stroked his grizzly beard and said, "Aye, yes! School was a terrible place."

Betsy turned her head on the pillow. Now she could see her clothes lying on her bedroom chair. There was her new green dress with the little puffy pockets. It was such a pretty dress but Betsy wished that she did not have to go to school in it. She leaned far over the side of her bed to see if she could see her new shoes. There they were, side by side, little brown shoes that fastened with a strap and a brass buckle. And there, hanging on the doorknob, was her schoolbag. It
was dark green with red and yellow stripes running up and down and across it. Mother called it plaid. It was trimmed with bright red and there was a long leather strap that Betsy could hang over her shoulder. Betsy had been happy the day Father had bought the bag for her. But now that the time had come for her to wear it she didn't feel happy at all. If only she could run away and hide!

Just then Mother came in. "Come, Betsy, it's time to get up," said Mother. "Today you are going to school." 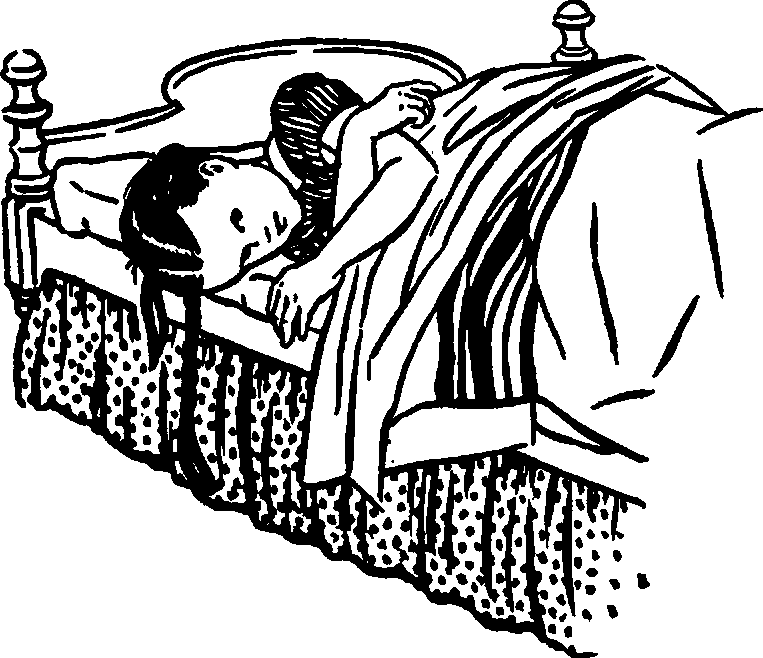 Mother helped her with her bath and brushed and braided her hair. Then she tied the crisp white sash on her dress.

After breakfast, Mother went upstairs to put on her hat. She was going to walk to school with Betsy every morning until Betsy knew the way.

Betsy sat on the bottom step of the stairs to wait for Mother. Her schoolbag was over her shoulder. There were two bread and jelly sandwiches tucked away in the pocket on the outside of the bag. Betsy felt very little and very scared, but she wouldn't tell Mother, because she did not want Mother to think that she was a baby. Only that morning Mother had called her "Mother's great big girl."

Suddenly Betsy thought of Koala Bear. Koala was the little toy bear that Uncle Jim had brought all the way from Australia. She would take Koala to school with her. It would not seem so strange or so lonely with Koala. Betsy ran upstairs and into her bedroom. She looked in the bed, but Koala was not there. Betsy was sure she had taken him to bed with her the night before. She pulled up the covers at the foot of the bed, for although Koala always went to bed with his nose sticking out at the top, it was nearly always 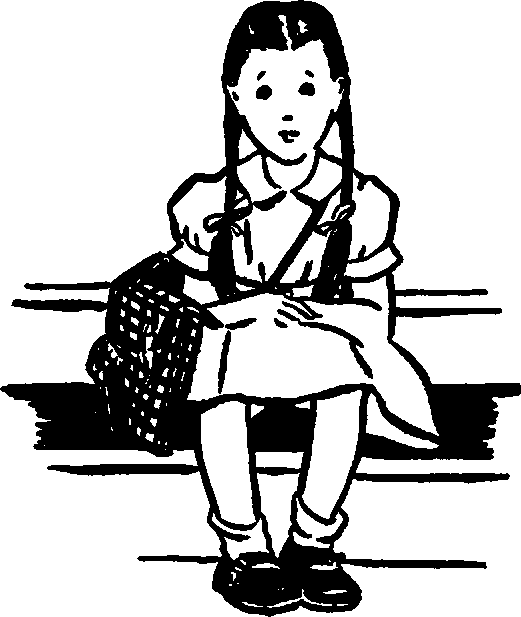 sticking out at the bottom of the bed in the morning. Sometimes he even fell out completely. Betsy looked under the bed and around the floor, but there was no Koala. She looked on the windowsill and in the toy closet, but Koala was nowhere to be seen.

"Betsy," called Mother from the foot of the stairs, "come at once, dear. You mustn't be late for school."

Betsy took one last look in the bed, but there was no sign of a little gray bear. Very slowly she went downstairs.

Betsy took hold of Mother's hand, and they started on the long walk to school. Mother took such big long steps that Betsy had to take little skipping steps to keep up with her. Every time she skipped she could hear her two pencils rattle in the pencil box inside her schoolbag.

At last they reached the school. Up the wide stone steps went Betsy, holding tightly to Mother's hand. In a little room a lady wearing glasses wrote Betsy's name on a pink card.

"Come this way, Betsy," said the lady with the glasses. She opened a door and Mother and Betsy passed into a room full of boys and girls. Each one was sitting behind a little brown desk.

A young lady with pale yellow hair shook hands with Mother. "This is Miss Grey, who will be Betsy's teacher," said the lady with the glasses.

Betsy was alone now in a strange new place. What a big room it was! One whole side of the room was made of windows. They were the biggest windows Betsy had ever seen. The walls seemed so far away and parts of them were black. In some places there was writing on the black walls. And the ceilingâhow high it was! It looked way, way off. So this was school! This great big room with the black walls and all the little desks was school. This was where she would have to come every morning. Betsy blinked her eyes to keep back the tears.

Miss Grey led her to a desk by the windows. It seemed such a long way from the door to the little desk. It seemed much longer than the whole way she had walked with Mother.

"This will be your desk, Betsy,"said Miss Grey.

Betsy took off her schoolbag and sat down. She thought of Mother who was getting farther and farther away every moment.
If I got up now and ran out the door,
thought Betsy,
I could catch Mother. I could be out in the sunshine again with Mother and take hold of her hand. I could 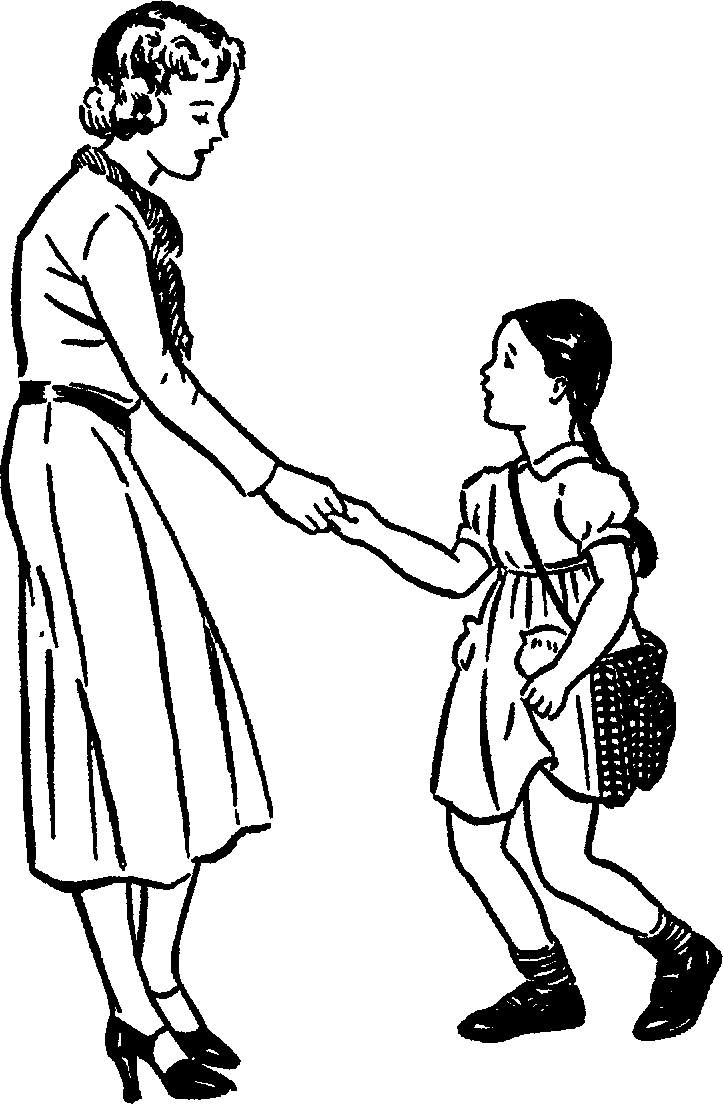 tell Mother that I don't want to go to school, that I know it is a terrible place, Old Ned said so.
But Betsy knew that she couldn't do that. She knew that Mother would bring her back again and would be ashamed of her. Nothing could be done about it. She would have to stay. Two big tears began to roll down Betsy's cheeks. She felt in her pocket for her handkerchief. It was not there. Then Betsy remembered that Mother had put it in her schoolbag. Betsy opened the bag and took out her shiny black pencil box. She felt for her handkerchief. As she did so, her 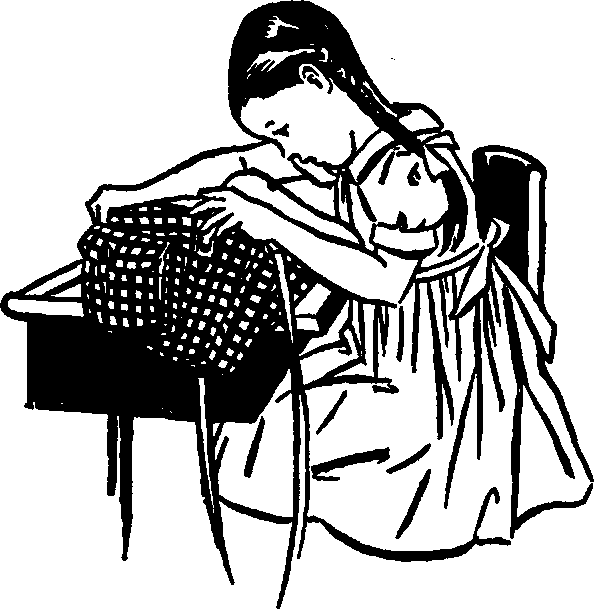 hand touched something soft and furry. Betsy looked inside the bag and there, looking at her with bright beady eyes, was Koala Bear. Tied around his neck was one of Father's old red neckties, so Betsy knew that Father must have hidden Koala in her schoolbag. Betsy wanted to hug him up tight, but instead she just put her hand in the bag and gave Koala a little squeeze and whispered, "Oh, Koala! I'm so glad to see you.

Joan Wolf by Margarita
Every Never After by Lesley Livingston
Between the Cracks by Helena Hunting
Move Over Darling by Christine Stovell
Countdown to Armageddon by Darrell Maloney
Best Girl by Sylvia Warsh
The Weekend by Bernhard Schlink
Fenella Miller by A Dissembler
Halfway There by Aubrie Elliot
Stormsinger (Storms in Amethir Book 1) by Cain, Stephanie A.