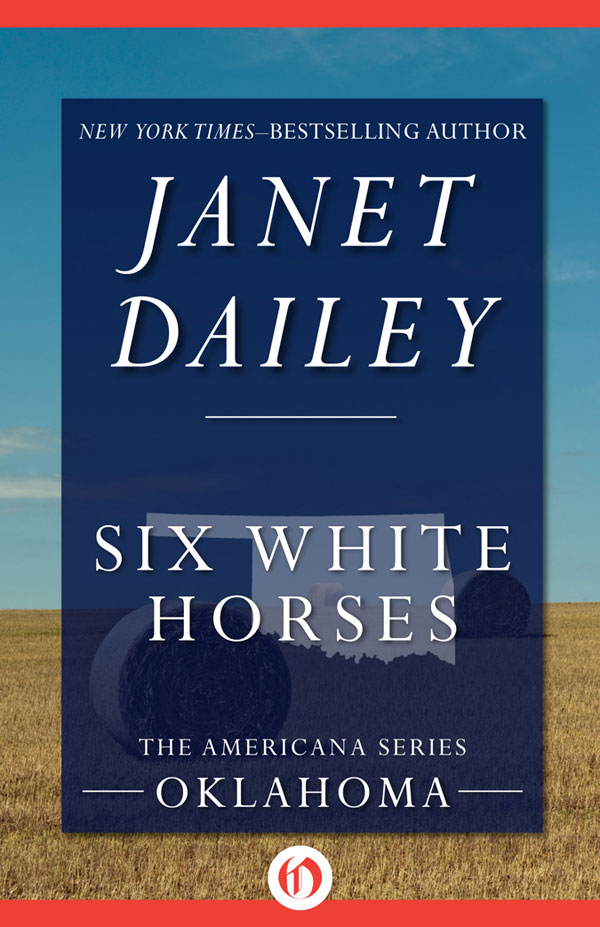 Introducing JANET DAILEY AMERICANA. Every novel in this collection is your passport to a romantic tour of the United States through time-honored favorites by America's First Lady of romance fiction. Each of the fifty novels is set in a different state, researched by Janet and her husband, Bill. For the Daileys it was an odyssey of discovery. For you, it's the journey of a lifetime.

THE HORSE moved restlessly, his coat shimmering with blue black hues. Its midnight color was contrasted by white saddle and bridle stitched with black leather and inset with black roses. White stockings were wrapped around the horse's legs and its impatient, dancing hooves were painted a silvery gray.

An aging man stood at the black's head, nearly dressed in a Western suit of light blue that accented the youthfulness of his build. His peppered gray head was turned to the boyishly slim girl hurrying toward him.

"What kept you, gal?" he asked with sighing patience. "They're ready to start the Grand Entry."

"The zipper got stuck on my slacks," she explained quickly, and effortlessly vaulted into the saddle, taking the reins he handed her.

The white pantsuit she wore matched the leather trappings of the horse, black roses embroidered on the pant legs and the shoulders and back. Dark brown hair was caught at the nape of her neck and plaited into a single braid.

"Knock 'em dead, honey!" he called out to her as she reined the horse away.

"I will, gramps!" Her
hand raised in a cheery salute as the powerful hindquarters of the horse muscled to leap into a canter.

Not until they neared the stands of the rodeo arena did Patty King slow the black horse's pace. Weaving through the congestion of horses and riders, mostly rodeo contestants, she smiled at the teasing remarks at her tardiness from those she knew. Butterflies beat their wings against the walls of her stomach as she halted the black horse behind a pair of golden palominos whose riders were carrying the flags.

The gates into the arena were closed. Already there was activity in the bucking chutes while the steady hum of the crowd in the stands indicated their impatience for the rodeo to begin.
Patty laid a soothing hand on the black's neck, quieting him with a few softly spoken words.

"Hey, Princess!" a voice called out to her as a leanly built cowboy jumped from the rail and walked toward her, flamboyantly dressed in a brightly figured Western shirt with leather chaps and jangling spurs.

"Princess?" Patty laughed her surprise, brown eyes dancing at the youthfully handsome face that stopped beside her.

"You're too little to be a king, so you have to be a princess," he winked. Grabbing the oversized saddle horn of her trick saddle and sticking the toe of his boot in the stirrup, he pulled himself up to her level, balancing himself with his other hand placed on the cantle. "I need a kiss for luck, Princess."

"Jack Evans, the last time I gave you a kiss for luck, you were bucked off the first jump out of the chutes." Twin dimples appeared in her cheeks.

An expression of mock seriousness spread across the face that was so near to hers. "You couldn't have put your heart into it. We'll simply have to keep trying until you get it right."

There was a rueful shake of her dark brown head at the sheer hopelessness of arguing with this cocky cowboy. Patty King had known him too long to be taken in by his considerable charm. Not another word of protest was offered as his mouth covered hers in a light but lingering kiss.

"Much better," he grinned, and swung away from her onto the ground.

"If all that mushy stuff is over," a growling voice said from the arena gate, "we'll get this rodeo started."

A faint pink of embarrassment flowed into her cheeks as Patty glanced at the older, battered-looking cowboy at the gates, his left arm in a plaster cast.

Grumbling silently, he nodded his acknowledgment. But her brown eyes had slid past him, caught by a pair of metallic blue. Self-consciously Patty stiffened with resentment at the mocking steel gaze. It belonged to the big, burly man just mounting the top rail of the arena fence.

Tall with powerful shoulders, there was not an ounce of spare flesh on his deceptively lean frame. Curling
jet black hair was visible under his hat brim. Every feature cried out with the aggressive thrust of his masculinity. Beneath thick black brows, sooty lashes outlined the brilliant blue eyes. As Patty met their gaze, she glared her dislike of their owner, Morgan Kincaid.

The arena gate was swung open and the rodeo announcer was proclaiming the start of the rodeo. The Grand Entry parade was concluded with the presentation of colors and the playing of the National Anthem.

When the rest of the horses and riders in the Grand Entry left the arena, Patty followed, pulling her black horse to a stop just inside the gate. Irritation smoldered near the surface at the sight of Morgan Kincaid swinging down from the fence rail and walking toward the chutes.

He was the antithesis of what she liked in a man. He had none of the quiet courtesy that she admired. His very presence was abrasive, setting her teeth on edge as effectively as the whine of a dentist's drill. He was aggressively male with none of the rough edges smoothed to be handsome. Party's concentration was so intent on the wide powerful shoulders that she nearly missed her cue from the rodeo announcer.

"Our special attraction for this evening, ladies and gentlemen, is Miss Patricia King," he announced, "a native of New Mexico, a truly fine trick rider and Roman rider. Patty, give them an example of what they'll see later on this evening."

Reining the black horse in a full circle to the right, its signal for the flat-out run, Patty took him into the arena. She went once around in a hippodrome stand, falling away on the second circle to a side drag that left the crowd gasping before they broke into applause.

There was no opportunity to stay and watch the first rodeo event, which was saddle bronc riding. Patty had to return to the stable area to help her grandfather harness the six white horses she used for the Roman ride. By the time the black leather trappings were on each horse and Patty had changed into a black outfit with white roses, she was due in the arena for her performance. With her grandfather Everett King walking at the head of Liberty, the left horse in the front pair, Patty sat bareback astride Loyalty, the right horse of the last pair.

The arena lights caught the sparkles dusted over the hindquarters of the six white horses as they pranced into
the arena to the tune of "She'll Be Comin' Round the Mountain." Patty's stomach was twisted in knots of nervous excitement. Rising to stand on the rosined back of Loyalty, she clucked comfortingly to the horses, taking an extra wrap on the six black reins, three in each hand. Oblivious to the announcer's words, she shifted her left foot to Landmark's back, easing the horses into a slow canter while she adjusted herself to the rhythm.

Murder on the First Day of Christmas (Chloe Carstairs Mysteries) by Thomas, Billie
The Avenger 35 - The Iron Skull by Kenneth Robeson
Home for Christmas by Nicki Bennett
The Museum of Heartbreak by Meg Leder
Taliesin Ascendant (The Children and the Blood) by Megan Joel Peterson, Skye Malone
K is for Knifeball by Jory John
Polly's Angel by Katie Flynn
Claiming Carter by W.S. Greer
Forever Blue by Abby Wilder
Intimate Enemies by Joan Swan