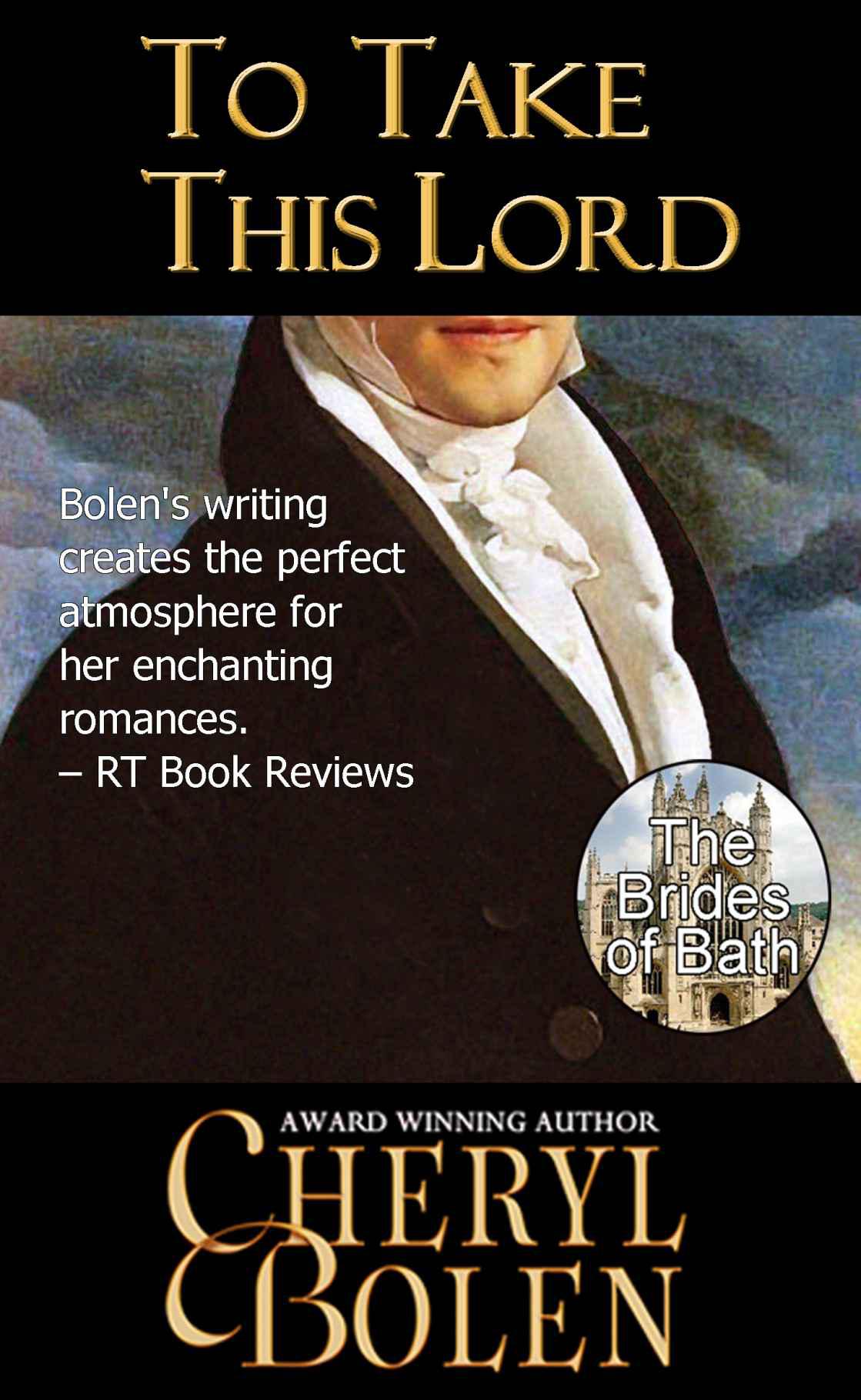 Praise for
To Take This Lord
:

(Previously published in mass market paperback as
An Improper Proposal
)

"Bolen's writing has a certain elegance that lends itself to the era and creates the perfect atmosphere for her enchanting romances." –
Romantic Times

"Sexual tension sizzles." –
Happily Ever After

"An emotionally compelling novel that kept me reading well after midnight." –
In Print

"A pleasant completion to the Brides of Bath series." –
The Best Reviews

George Pembroke, the Viscount Sedgewick, is a man bent on self-destruction. Even though it's been two years since his cherished wife died on childbed, George continues to rely on liquor to blunt his grief.

Worried about him and his children, George's sisters urge him to ask spinster Sally Spenser – a longtime family friend – to help care for his daughter and son. Sally's the perfect person. She's of high birth, has no money, and she adores his children. But George can't ask an earl's niece to become a servant! However. . .since he'll never love again, why not make Sally his viscountess? It would be a marriage in name only. For the children.

Sally's deep love of the children and fear that their father might marry an unfeeling stepmother that prompt Sally to agree George's proposal. Even though it will be unbearable living under the roof of the man she loves and knowing she can never have him.

The Brides of Bath Series

To Take This Lord (
previously titled
An Improper Proposal)*

With His Lady's Assistance

A Most Discreet Inquiry

A Lady by Chance*

A Cry In The Night (Texas Heroines in Peril)

It Had to Be You
(Previously titled
Nisei
)

A Summer To Remember(3 American Romances)

To Take This Lord

To Take This Lord
is a work of fiction. Names, characters, places, and incidents are the products of the author’s imagination or are used fictitiously. Any resemblance to actual events, locales, or persons, living or dead, is entirely coincidental.

No part of this publication may be reproduced, stored or transmitted in any form or by any means without the prior written permission of the author.

This book is dedicated to my precious son, Bo,

who (regrettably) shares his mother's disdain

for the mundane. Your father and I hope you

soar on the wings of your dreams.

Blanks had revisited every schoolboy prank he and George – now Lord Sedgewick – had ever instigated. Anything to keep George's mind off the grim lying-in taking place beyond the door to Lady Sedgewick's bedchamber. It had taken all Blanks's efforts to keep George from storming into his wife's rooms when he heard Diana moaning in pain.

No matter how amusing Blanks was, George could scarcely attend to his words. A chilling, foreboding fear like nothing he had ever experienced gripped him. He thought back to when Diana had given birth to their first, Georgette. The attending physician had deemed it a remarkably simple birth in spite of the nine hours his beloved Diana had writhed in pain.

It was said the second one would come quicker, but already it had been ten hours, and there was no sound of a babe.

With sickening apprehension, George was coming to believe something had happened to the babe. As disappointing as that would be, he could accept it. He could accept anything except losing Diana. The very thought of Diana dying caused his stomach to restrict and left him feeling strangled of all life. He could not bear even the contemplation of it,

He looked up at Blanks and said, his voice splintering, "Something's wrong." As soon as he said it, he wished he could retract his words. Poor Blanks would be a father for the first time before the month was out, and George had no business alarming his friend. For Blanks was as besotted over his wife–George's sister Glee–as George was over Diana. If that were possible. Though George was convinced no one could love anyone as much as he loved Diana. Never had a more perfect, more beautiful creature graced the planet. Not even his sisters, Felicity and Glee, could compare.

"You're just imagining things," Blanks said. Though Blanks attempted a reassuring voice, his own fears caused his voice to crack.

George turned when he heard footsteps mounting the stairs, and he saw Felicity's blond hair. She was accompanied by her husband, Thomas Moreland. George could never look at Moreland without being struck by the resemblance between him and Diana, Moreland's sister.

"Do we have a baby yet?" inquired Felicity, her face lifting into a smile.

Felicity set a gentle hand on his arm. "Don't worry. She'll be fine. I'll go check on her right now." Then she disappeared into the viscountess's chambers.

A quick glance at Moreland caused George to become even more upset. For Diana's brother's face had become ashen. Thomas pulled up a Chippendale chair and sat beside George and Blanks. "How long's it been?"

Thomas's brows lowered. "I had thought it wouldn't take so long the second time."

"That's what I thought," George said.

The door to Lady Sedgewick's room squeaked open, and George looked up to gaze at Felicity. And his heart sank. Tears streamed from her blue eyes.

George leaped to his feet. "What is it?" he shouted. "Is it Diana?"

She slowly nodded, then she burst into tears.

George did not hear Moreland's hoarse scream or Blanks's sharp intake of breath. He had entered his wife's dark chamber. He ignored his very-increasing sister Glee, who stood clutching Diana's hand, tears flowing unchecked down her face.

They had to be wrong! Diana couldn't be dead! He reverently approached her canopied bed and looked down at her lily white face, her dark hair damp around her temple, her long lashes closed as if she were asleep. Even after all this time, his heart clenched whenever he beheld her gentle beauty.

For a few hopeful seconds he allowed himself to believe her alive. His beautiful wife was merely asleep. With tears pooling in his eyes, he went to caress her face with his palm. As soon as his flesh touched her cold skin, he knew. A primeval sound broke from him. "No-o-o-o-o!"

He drew her limp body into his arms and sobbed.

He must have held his precious Diana to him for an hour before Glee urged him to let her go. "You must come and see your son, George," she whispered.

With one last racking sob, George let go of Diana's lifeless body and whirled at his sister. "I want no part of the babe! He killed his mother!"

Then George stormed from the chamber.

"I declare, Sally, the only time my poor nephew doesn't cry is when you're present," said Glee, who was plaiting the hair of her own little toddler, Joy.

Sally Spenser dropped a kiss on little Sam's golden ringlets and continued to rock him. She told herself she had become attached to the little tyke because he had never known a mother's caress. More likely, Sally's affection for Sam was fed by his own father's scorn for his innocent son.

Sam's father, George Pembroke, the Viscount Sedgewick, was undoubtedly the most exasperating man Sally had ever known. His lack of interest in his heir was unforgivable. His propensity for tipping a cup too much was irresponsible. His predilection for gaming was unwise. And his taste in poetry was nonexistent. In short, there was not a single thing about the viscount of which Sally approved. They could not be in the same chamber together for five minutes without clashing.

Why, then, had she adored him for half of her two and twenty years? Ever since she and Glee had become best friends while attending Miss Worth's School for Young Ladies, Sally had worshipped Glee's elder brother. It wasn't as if George had ever given Sally a crumb of encouragement. Quite the contrary. The viscount had never had eyes for any woman on earth save his beloved wife Diana, who had been dead these two years past.

It hurt Sally to see George descend further into the grim valley of grief he had dug for himself since Diana's death. It was evident he had no desire to live. There was no longer any joy in his life, save his love for his daughter, who bore a striking resemblance to her mother.

"I'm so happy you've come to Bath," Glee said to Sally. "Not just because I love you so dearly and am so thoroughly happy to see you—but because poor little Sam needs you. I've become quite concerned about him. He doesn't speak at all, and Joy—who's a week younger than he—is already talking in sentences."

Sally bristled. "Mama said girls always talk before boys do. She also said to never compare children for they each develop at a different rate, but they all get to the same place sooner or later."