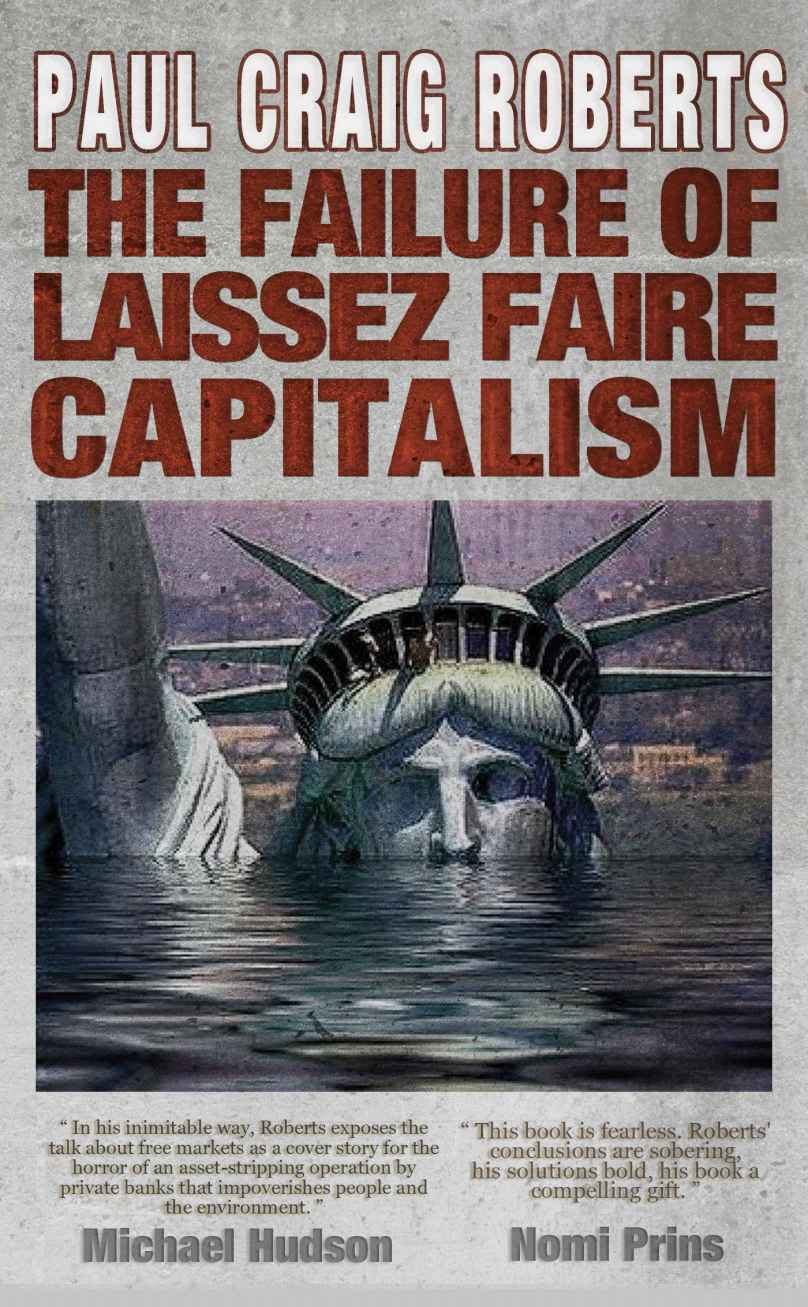 Towards a New Economics for a Full World

Praise for this book from Michael Hudson and Nomi Prins

“
In his inimitable way, Roberts describes how the rhetorical patter talk about free-markets is a cover story for the horror of an extractive asset-stripping operation by publicly-supported private banks and the governments that they control that impoverishes people and the environment. He shows that unrealistic assumptions made by free-trade ideologues have led to the “New Dispossession” and a political and economic race to the bottom, applauded as a success story by junk economists, who ignore the reductions in living standards and rise in environmental instability.

Roberts describes how Germany’s economic surplus is being used to serve private European financial predators, and how the highly touted “foreign investment in America” consists of the use of credit and trade surpluses that foreign countries have with the import-dependent US to finance the foreign purchase of the US economy, rather than to provide new capital formation that would re-employ Americans dispossessed by jobs offshoring.
”
- Michael Hudson

“
The Failure of Laissez Faire Capitalism, is fearless. It transcends Roberts’ illustrious career and prior works of intellectual and practical analysis. We are at the crossroads of a crumbling world where both policies and ideologies have failed. Roberts shows the dangers of clinging to the idea that markets are free and to the belief that unrestrained and unregulated capitalism is positive. Jobs offshoring destroyed middle class prospects, and financial deregulation fostered a rapacious banking industry that has removed itself from market discipline and threatens Western economies with collapse. Roberts’ conclusions are sobering, his solutions bold, his book a compelling gift.
”
-
Nomi Prins

Preface to the European Edition by Johannes Maruschzik

The Error of Free Trade

From Crony Capitalism to Plutocracy

How much longer reserve currency?

The end of the European national states

Critique of the growth model

Part One: Problems in Economic Theory

Offshoring Exports Jobs Instead of Products

The Problem of External Costs

Planning for a Full World

Failures of Economic Theory Are Pervasive

The Failure of Laissez Faire Capitalism

The Evidence from the Bureau of Labor Statistics

The Myth of Benevolent Globalism

Dissenters from the Myth of Benevolent Globalism

US Wealth and Income Distribution

Lies That Killed The American Dream: The Science and Technology Skills Shortage Myth

Where did the Money Go?

The Conflict of Interest That Masquerades as Government

Part Three: The End of Sovereignty

Can Germany Remain a Sovereign Country?

He was Assistant Secretary of the US Treasury in the Reagan administration, a member of the US Congressional staff, associate editor and columnist for the Wall Street Journal, columnist for Business Week, the Scripps Howard News Service, and Creators Syndicate, Senior Research Fellow, Hoover Institution, Stanford University, and was appointed to the William E. Simon Chair in Political Economy, Center for Strategic and International Studies, Georgetown University.

He is chairman of the Institute for Political Economy and author or coauthor of ten books and numerous articles in scholarly journals. He has testified before committees of Congress on 30 occasions.

Dr. Roberts was awarded the US Treasury’s Meritorious Service Award for “outstanding contributions to the formulation of US economic policy,” and France’s Legion of Honor as “the artisan of a renewal in economic science and policy after half a century of state interventionism.”

To learn more about Dr. Paul Craig Roberts visit his website at:
http://www.paulcraigroberts.com

Preface for the German edition

We are witnesses of a historical turning point. A new world order is emerging. Economic power is shifting to the BRIC states
1
and to other emerging countries at an enormous pace. New alliances such as the Shanghai Cooperation Organisation (SCO) with China and Russia as driving forces have been preparing the new economic world order well in advance. It is very likely that they will dominate it.

However, the forces that have been leading the global economy throughout the past decades – the U.S., UK, Euroland, and Japan – are struggling to survive. Their economies are in a process of disintegration. Especially in the U.S. and in EU countries more and more people are living in poverty. Further significant losses in welfare are looming ahead. Major parts of these populations do not see any future for themselves in the global economy. Because of debt and unemployment, many states face political chaos. There is risk that radical political forces will arise from the weakness of the political and economic system and create a new form of tyranny.

Economists share the responsibility for the decline of the economies of the Western World. Rather than impartially analysing the changes in the global world economy in order to develop responses, the different economic schools are slaves to their ideologies. Frequently, what does not fit into the theory is neglected. Furthermore, many economists are corrupted by service to interest groups and politicians who misuse the democratic system for their own purposes. By contrast, economists carrying out real scientific work are rare. They are hardly heard by policymakers.

These are key issues raised in this book by Dr. Paul Craig Roberts, who in the early stages of the government of U.S. president Ronald Reagan as Assistant Secretary of the Treasury was responsible for the economic policy of the United States.
2
This book is a fundamental challenge both analytically and empirically to economic theory and policy as presently understood and practiced.

Part 1 reviews the successes and failures of economics to the present time. It spares neither Keynesian economists, who are convinced that governments must have a big say, nor neoliberal and libertarian economists, who refuse any regulation of markets by governments. After reading the first sentences it becomes clear that the book is written by an independent, thinker who is not afraid to question conventional wisdom.

Paul Craig Roberts is closer to the libertarians than to those who think governments must run the economy. As Father of Reaganomics
3
he brought into economic policy the insight that fiscal policy shifts the aggregate supply curve, not merely the aggregate demand curve as Keynesian macroeconomics taught. High tax rates discourage work and saving and thus reduce the response of supply to policies that stimulate demand. The “Agenda 2010” of the red-green German government including cuts of the marginal tax rates would have been unthinkable without the changes that took place in the U.S. tax policy in the early 1980s and which were promoted by Paul Craig Roberts.

“Libertarians think that human nature changes according to whether it is employed privately or publicly. They don’t accept that private power can be just as abusive as public power. I appreciate libertarians’ defence of liberty, but I have otherwise lost patience with them.“ Paul Craig Roberts wrote to me these sentences at the time we were discussing the translation of this book. They link seamlessly to the warning Nobel laureate Friedrich August von Hayek expressed in his classic‚ The Road to Serfdom in 1944: “Probably nothing has done so much harm to the liberal cause as the wooden insistence of some liberals on certain rules of thumb, above all the principle of laissez-faire.“ [By liberal, Hayek and Maruschzik mean classical liberal, akin to today’s libertarian, not to postwar American liberals.]

In Paul Craig Roberts’ eyes Laissez-faire capitalism is problematic in three areas: Firstly, the author criticises as naive the belief that markets are self-regulating. Markets are social institutions. It is the human actors in markets that require regulating. Secondly, he brings home to us that the unconditional belief in the benefits of free trade in the age of globalism must cause significant welfare losses and spread pauperism among the population not only in some developing countries but also in the Western World. Thirdly, he bemoans the ignorance of many economists that man-made capital is not a substitute for nature’s capital and that the exhaustion of nature’s capital in behalf of short-term profit is at the expense of future generations.

Paul Craig Roberts sees deregulation of the U.S. financial markets as the main cause of the most recent global financial and economic crisis. Alan Greenspan, chairman of the U.S. central bank, the Federal Reserve, preached the belief that markets are self-regulating. Around the millennium laws were abolished in the U.S. that had been created in light of the experiences with the Great Depression in the 1930s.
1
New highly risky and speculative financial instruments were left unregulated, and the Glass-Steagall Act was repealed, thus allowing the merging of commercial and investment banking. Experts had warned against the dangers of deregulated financial markets, especially the derivatives
2
(especially credit default swaps / CDS
3
). The warnings were ignored. The financial markets were turned into a gambling casino by the pursuit of instant riches.

We can glean information on the excesses in the U.S. financial markets in a number of books in great detail. A nightmarish subject matter that is more typical for crime novels. With a crucial difference: this is not about fiction. Rather, here was criminal energy at work that destroyed the life of millions of unsuspecting and surely also clueless people.

Paul Craig Roberts brings up a painful subject. Private power was abused on a grand scale.

The politics of deregulation opened up the opportunity and allowed an unprecedented concentration of power in the financial sector. He writes: “The economic and financial mess in which the US and Europe find themselves and which has been exported to much of the rest of the world is the direct consequence of too much economic freedom.”

Losing My Cool by Thomas Chatterton Williams
Celtic Magic by Amber LaShell
How to Make Her LET GO & GIVE IN: The No-Bullshit Guide to Great Sex by Stan Findus
The Demon King's Sex Kitten: Book One by Beth Wright
Compleat Traveller in Black by Brunner, John;
The Best Australian Essays 2014 by Robert Manne
Psychic Warrior by Bob Mayer
The Imperium by PM Barnes
Maxwell's Crossing by M.J. Trow
6 - Whispers of Vivaldi by Beverle Graves Myers