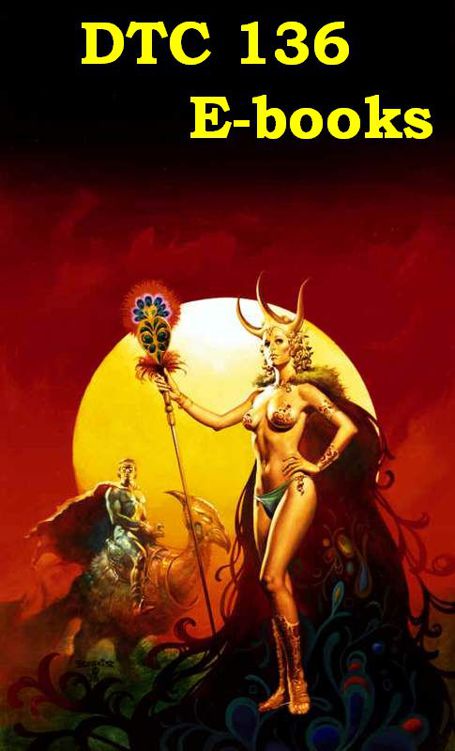 This book was scanned by JASC

If you correct any errors, please change the version number below (and in the file name) to a slightly higher one
e.g.
from 1.5 to 1.6, or if major revisions to v. 2.0 etc..

DO NOT READ THIS BOOK OF YOU DO NOT OWN/POSSES THE PHYSICAL COPY. THAT IS STEALING FROM THE AUTHOR
.

Series: Volume
Four
of The Crown of Stars

Extra Scan Info: The series has 5 books in total; book 5 has not yet been released and will not be published until later this year(2003), thus book 5 will not be scanned for a while.

**VOLUME Four of
CROWN OF STARS**

OFF
to the southeast, thunder rolled on and on. But in the broad ditch where three youths and two gravely injured soldiers had taken refuge from the battle, the rain had, mercifully, slackened. A wind out of the north blew the clouds away, revealing the waxy light of a full moon.

Ivar listened to the sounds of battle carried by the breeze. They'd scrambled down into die ditch from an embankment above, hoping to escape the notice of their enemies. They hadn't found safety, only a moment's respite, caught as they were behind the enemy's line. The Quman warriors would sweep down from the earthen dike and slaughter them, then cut off their heads to use as belt ornaments. Or, at least, that's what
Baldwin
seemed to think as he babbled confusedly about Quman soldiers searching the huge tumulus and its twisting embankments, lighting their way with torches.

From his place down in the slippery mud at the bottom of the ditch, Ivar didn't see torches. There was a lambent glow emanating from the crown of the hill, but it didn't look like any torchlight he had ever seen.

Sometimes, when a situation was really bad and there was nothing you could do about it, it was just better not to know.

"Careful," whispered Ermanrich.” This whole end is filled with water. God's mercy! It's like ice."

"Come on, Dedi, come on, lad," coaxed the older of the two wounded Lions to his young companion, but the other man didn't rouse. Probably he was already dead.

Ivar found the water's edge, cupped his hands, and drank. The cold cleared his head for the first time since he had lost his fingers, and finally he could sit back and survey just how bad their predicament was.

Moonlight cast a glamour over the scene. The pool of water had formed up against a steep precipice, the face of the hillside. Over the course of uncounted years a trickling cataract had worn away the cliff face to expose two boulders capped by a lintel stone. Starlight caught and glimmered in one of the stones, revealing a carving half concealed behind tendrils of moss. Ivar negotiated the pool's edge so as not to get his feet wet—not that he wasn't already slopping filthy with mud—and traced the ancient lines: they formed a human figure wearing the antlers of a stag.

"Look!"
Baldwin
pushed aside the thick curtain of moss draping down over the stones to unveil a tunnel that cut into the hillside.

Their side had lost the battle anyway, and they were cut off from Prince Bayan's retreating army and all their comrades, those who had survived. How could an ancient tumulus be worse than the Quman? Ivar squeezed past the opening, wading in. Cold water poured down into his boots, soaking his leggings and making his toes throb painfully. He couldn't see a thing.

A body brushed against him.” Ivar! Is that you, Ivar?" "Of course it's me! I heard a rumor that the Quman fear water. Maybe we can hide here, unless this pool gets too deep." The ground seemed firm enough, and the water wasn't deeper than his knees. Plunging his arm into the freezing water, he groped for and found a stone, tossed it. The plop rang hollow. Water dripped steadily ahead of them.

Something living scuffled, deep in the heart of the tumulus.” What was that?" hissed
Baldwin
, grabbing Ivar's arm.” Ow! You're pinching me!"

It was too late. Their voices had already woken the restless dead. A wordless groan echoed through the pitch-black tunnel.

"Oh, God." Ivar clutched at
Baldwin
's arm.” It's a barrow. We've walked into a burial pit and now we'll be cursed."

But the voice made words they recognized, however distorted they might be by the stone and the drip of water.” Is it you? Is it Ermanrich'ss friends?"

"Ai, t-thank the Lady!" Her relief was evident despite the blurs and echoes.” Poor Sigfrid was wounded in the arm and we got lost, and—and I prayed to God to show me a sign. And then we fell in here. But it's dry here where we are, and I think the tunnel goes farther into the hill, but I was too afraid to go on by ourselves."

"Now what do we do?" whined
Baldwin
softly.

"Let's get the others and we'll go as deep as we can into the hill. The Quman will never dare follow us through this water. After a day or two they'll go away, and we can come out."

They trudged back to the mossy entrance, where they found Ermanrich shuddering and coughing as he clawed at the moss.

"Ai, God! There you are! I thought you'd been swallowed." He heaved a ragged sigh, then went on in a low voice, making a joke of his fear and relief.” Maybe even the hills think
Baldwin
is handsome enough to eat, but I don't know what they'd be wanting with an ugly redheaded sot like you, Ivar."

"Dirt is blind, otherwise you'd never get inside. Come on." Ivar waded over to the conscious Lion.” Friend, can you walk?"

"We'll carry him," said Ivar hastily.” But let's get him out of that mail first. Ermanrich, give me a hand, will you?
Baldwin
, you help the Lion in, and keep ahead of him in case there's any pits."

"Pits? What if I fall into a bottomless hole?"

"
Baldwin
, we haven't got time! Here." He found the unconscious Lion's sword sheath.” Take this sword and use it to feel your way forward."

Amazingly,
Baldwin
obeyed without further objection. He helped the old Lion to his feet and steadied the soldier as he hobbled to the tunnel.

It wasn't easy to get mail off an unconscious man.” I think he's already dead," Ermanrich whispered several times, but in the end they wrestled him out of his armor.

Nor was it easy to haul him in through the tunnel even without his armor. He was a big man, well muscled, so badly injured that

he was a complete dead weight. Luckily, the water did not rise past their thighs before an upward slope brought them shivering out of the water onto dry ground. The weight of the hill pressed above them. Dirt stung Ivar's nostrils, and his mutilated hand burned with pain.

"Thank God," said
Baldwin
out of the darkness. Ivar and Ermanrich set down the unconscious soldier, none too gently, and Ivar straightened up so quickly that he banged his head hard against the stone ceiling. The pain made tears flow, and in a way he did want just to sit down and cry because everything had been such a disaster. He really had thought they'd win the battle. Prince Bayan's and Princess Sapientia's troops had looked so magnificent arrayed against the Quman army, and even the dreaded Margrave Judith had ridden out with such a strong host that it seemed impossible that everything had fallen apart, including their line. Prince Ekkehard had vanished in the maelstrom, his companions were scattered or dead, and they were all that was left. Probably they were the last remnant of Bayan's army left on this side of the river: two badly injured soldiers, four novice monks, and one lost nun.

The battle had started very late in the afternoon, and now night settled over them. Two hours at the most separated them from that glorious place where they'd waited at the front of the right flank, ready to sweep into battle. It just didn't seem possible everything had gone wrong so fast.

But meanwhile, someone had to go back to make sure that the Quman hadn't followed them under the hill. Cold, wet, and shivering, Ivar braced himself for the shock of wading back into the water that drowned the lower reaches of the tunnel. His leggings already clung to him like icy leeches, and his toes had gone numb from cold.

A hand snaked out of the darkness to grab at his sleeve.” Are you sure you don't want me to come with you?" Baldwin asked in a hoarse whisper.

"Nay. It's better if I go alone. If something happens to me, it'll take you and Ermanrich and Lady Hathumod to carry the injured Lion."

Baldwin leaned closer. Despite the long weeks of travel in harsh conditions, the terror of a losing battle waged as afternoon gave way to dusk, and the desperation of their scramble over the ancient earthworks, Baldwin's breath was still as sweet as that of a lord sitting in pleasant splendor in his rose garden, drinking a posset of mead flavored with mint.” I'd rather be dead than go on without you."

"We'll all be dead if the Quman find that armor and figure out that we're hiding in this tunnel. Just stay here, Baldwin, I beg you."

Behind, in the stygian blackness, Sigfrid's gentle voice fell and rose in a melismatic prayer. Somehow, the darkness warped time. Hadn't it just been moments ago that they had stumbled upon that hidden opening? It seemed like hours.

Beneath Sigfrid's quiet prayer Ivar heard Hathumod murmuring words he couldn't quite make out. She was answered, in turns, by monosyllabic grunts from the old Lion and whispered questions from Ermanrich. He could not see, not even Baldwin, who stood right next to him. He felt them, though, huddled together like frightened rats under the weight of earth and rock.

He took the unconscious Lion's sword from Baldwin and tested the grip with his good hand, squeezed and relaxed until the leather grip gave enough to fit the curve of his hand. With gritted teeth, he surged forward into the water and shuddered all over again as the tunnel floor plunged down and the icy water enveloped his legs.

With the sword drawn tightly against his left leg, Ivar approached the entrance in relative silence. He smelled the distant stench of the battlefield. Night crows cried far away, alerting their cousins to the banquet. A pebble rolled under his boot, and he grunted softly, balancing himself. The wound on his right hand scraped stone. He caught back a gasp of pain as a hot trickle of blood bled free. Pain stabbed up his hand, and he stumbled forward. The stumps of his missing fingers, shorn off right at the second knuckle, jabbed into a moist tapestry of moss. Tears streamed from his eyes and made salty runnels over his lips. After a while, the pain subsided enough for him to think.

He had reached the entrance. Cautiously, with his good hand, he fingered the tendrils of moss which streaked the crumbling entrance. Behind this curtain he waited, listening. He couldn't see anything, not even the sky. It seemed as dark beyond the curtain

concealing the tomb's entrance as it had deep within. The heavy scent of damp and earth and wet moss shrouded his world.

Tide and Tempest (Edge of Freedom Book #3) by Ludwig, Elizabeth
Midnight in Madrid by Noel Hynd
Knight in Blue Jeans by Evelyn Vaughn
Steampunk Holmes: Legacy of the Nautilus by P.C. Martin
Gaining Hope by Lacey Thorn
Tea for Two by Janice Thompson
Ripper by Reeves, Amy Carol
Eden Falls by Jane Sanderson
Act of Faith by Kelly Gardiner
Dead If I Do by Tate Hallaway