Read Back in the Game: A Stardust, Texas Novel Online

Back in the Game: A Stardust, Texas Novel 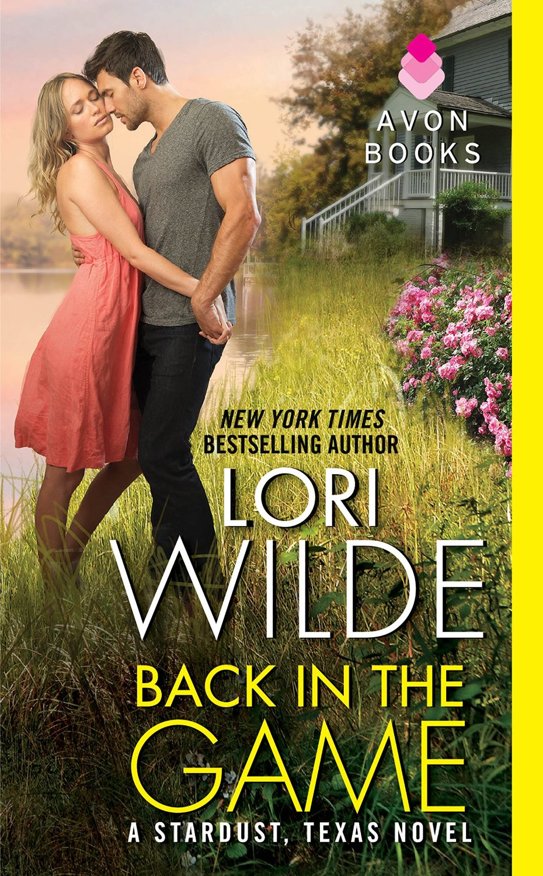 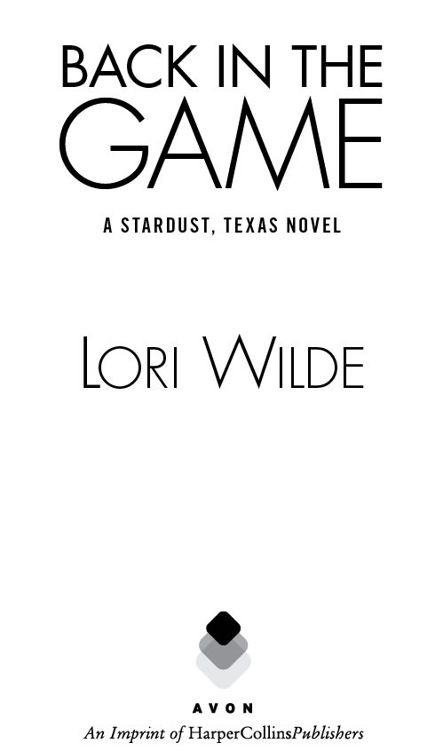 This book is dedicated to the town of Terrell, Texas, and to Maddie, the Hurricane Katrina Survivor.

Announcement to
Rules of the Game

Although the town of Stardust, and the characters in it, are fictional, the warm, loving, supportive community and Timeless Treasure were inspired by the fellowship I found in Terrell and at Books and Crannies bookstore, owned by Ron and Gayle Harris and frequented by an amazing group of readers and friends. The only fictional character with a real-life counterpart is Callie, the Hurricane Sandy-surviving calico cat.

Baseball breaks your heart. It is designed to break your heart. The game begins in spring, when everything else begins again, and it blossoms in the summer, filling the afternoons and evenings, and then as soon as the chill rains come, it stops and leaves you to face the fall alone.

The sound punctuated Rowdy Blanton’s life. Permeated everything. Seeped into his dreams.

From sandlot ball in knee-high Johnson grass in his hometown of Stardust, Texas, to luxurious major league diamonds, a crack of the bat spelled freedom. Freedom from boring classrooms where he struggled to read, from the empty belly that kept him awake nights, from watching his father wither and die.

The crack of a bat carried him from poverty to the pinnacle of success, and all the nice things that money could buy. He had arrived, believing his lofty perch would finally ease his suffering.

His head throbbed. Tequila hangover. He squeezed his eyelids shut.

His belly ached. Kobe beef hangover. He clenched his teeth.

Oh God, his pitching arm.
He winced, groaned. For one sweet fuzzy moment, he had forgotten about his ruined pitching arm.

A wet tongue licked his cheek. He put his elbow over his face, blocking the amorous kiss.

Was it the blonde from last night’s Cinco de Mayo party? Or the redhead? Might even be the brunette. She’d pawed him like a kitty at catnip.

No. Couldn’t be. He’d sent them all home.

Ever since that devastating night he always sent them home. He should be alone. But obviously, someone had lingered, taking advantage of his tequila-soaked brain.

The hot, wet tongue slurped across his mouth. Sloppy kisser. Which one shared his bed? Blonde? Redhead? Brunette? Someone else entirely?

Sun warmed his face. The smell of chlorine burned his nose. A plush cushion covered the thin metal frame beneath his body. No. Not his bed.

Who was he going to have to face, cook breakfast for, walk to her car, kiss good-bye, and never see again?

He might as well get it over with. As much as he hated pain, he wasn’t a coward. Dreading what he would find, Rowdy held his breath, opened one eye, and saw . . .

The old boy sat on his haunches, tail wagging, staring at Rowdy with love and concern shining in his big brown eyes.

At the sight of his bloodhound, the throbbing ebbed, his stomach settled, and a helpless smile overtook his face. He scooted onto his side, and patted a spot beside him.

It took the bloodhound a minute to position his aging legs, but he managed the short hop onto the lounger. Rowdy wrapped his arms around his dog, hugged him tight, buried his nose in Nolan’s fur, and for one brief moment felt no pain.

He closed his eyes. Drifted back to sleep.

The seventh inning stretch. Blue skies. Balmy weather. “Take Me Out to the Ballgame.” Hot dogs. Roasted peanuts. Beer. Pretzels. Dot races. The familiar feel of a leather glove against his right palm, the ball weighted in his left hand. Two hundred and sixteen stitches on a major league baseball sewn in red cotton thread.

This was his whole world. His life. The ball. The diamond. The game.

So went the duel between pitcher and batter. The declarative noise he both loved and hated.

He looked up, following the ball, but the blue skies disappeared, replaced mysteriously by velvet night.

Neon lights spiked the darkness. A woman’s perfume scented his collar. Loud music vibrated the ground. Distant laughter. A Dumpster. The fetid stench of garbage seized his nose. He was on the ground. Fetal position. Right arm held defensively over his face. Left arm separated from his shoulder at the socket, hanging useless at his side.

A man stood over him. Fierce. Swarthy. Extravagantly muscled. Thick black hair. Pit-of-hell black eyes. Flaring nostrils. The tattoo of a striking cobra inked on his right forearm. Louisville Slugger cocked over his shoulder. With each swing of the bat the snake undulated in the yellow glow of the alley security lamp.

His attacker yelling with every whack, again, and again, “Stay away from my wife!”

A crush of bone.

And life as he knew it was over.

The forlorn belongings of the recently departed, cataloged and arranged for easy browsing, gave her chill bumps in the same way as the turkey buzzards that nested in the loblolly pine outside her bedroom window. Each year the vultures raised a new set of voracious young to patrol the two-lane, farm-to-market road extending from Stardust, Texas, north to Jefferson, keen-eyed for the misfortune of others.

It was not what Breeanne wanted to do with her life, this picking through of things left behind.

But here she was, doing it all the same.

How could she tell her parents that she had dreams beyond Timeless Treasures? While she loved the family business that was part antique store, part bookstore, part tearoom, and the undisputed hub of Stardust for the last twenty-five years, she burned for a real writing career.

She’d enjoyed a tiny bit of literary success, just enough to stoke the flickering candle of her hunger to a raging blaze. She’d written a book about her great-aunt Polly, who played center field for women’s professional baseball during WWII. She’d gotten an agent, sold to a regional press for a modest advance, and they had contracted her to write a follow-up book about the history of baseball in Texas.

Foolishly, stupidly, she believed she was on her way.

Then her publisher went out of business. No one else wanted the second book. Her agent quit taking her calls. Doggedly determined to make it as a writer, she self-published her second book.

And promptly fell down the well of Internet obscurity.

The book had been available online for six months, and despite extensive promotional efforts that plowed through her savings, she’d sold the grand total of eighty-seven copies, and as far as she could tell, every single one of those to family and friends.

“That means you have eighty-seven people who love you enough to buy your book,” her mother said at Breeanne’s disappointment. “You are rich beyond words.”

Her father’s comment splashed over her like gasoline on a campfire. “No,” she declared, shocked by the powerful punch of anger pushing out of her. “You’re wrong. I haven’t been working hard enough!”

Unaccustomed to opinionated outbursts from their most easygoing daughter, her parents had both taken a step back, and exchanged wary glances.

“You’re becoming obsessed with this writing thing,” her mother said. “It’s not healthy. You need to relax. Go swing in the hammock. Get some sunshine.”

Dad smiled a gentle smile. “You know, angel, it’s next to impossible to make a living as a writer. The Rangers are playing the Cardinals on TV at two, what say you come watch the game with your old man?”

Because she did love her father and baseball, Breeanne backed down, and instead of going to her room to write, she went to watch the game with him. But the entire time, she couldn’t stop thinking,
He doesn’t believe in me, they don’t believe in me, no one believes in me.

But stubbornly, against all odds, Breeanne believed in herself. She
would
make this happen. If it took twenty years, then so be it. In the meantime, her close-knit family had expectations of her. So here she was, going picking.

Smiling put the blues on notice. It was her go-to expression for smoothing over everything. No room for bad moods. Never mind that she wasn’t feeling it. Fake it until you make it. She was finally healthy, and had a family who loved her. The writing would eventually take care of itself as long as she kept at it.

On this Sunday morning in May, navy blue night faded into the deep purple of impending dawn. Every expert bargain hunter knew that arriving after first light meant you were already too late for the good stuff.

Breeanne’s oldest sister, Jodi, drove the minivan branded with the name of her business on the back window, “Boxcars and Breakfast.” Enterprising Jodi bought old boxcars for cheap, and with her mad carpentry skills, converted them into luxurious sleeping accommodations on land that she’d inherited near the state park.

In her role as second oldest, Kasha rode shotgun. Kasha had a PhD and worked at the VA hospital as a physical therapist.

Breeanne sat in the back with Suki, the baby of the family. Suki ran the Internet side of Timeless Treasures, and had her own jewelry-making business on the side.

Normally, their parents would accompany them on their weekly Sunday morning hunt, but their folks were celebrating their thirtieth wedding anniversary on a romantic getaway to San Antonio.

Bumper-to-bumper traffic idled up the sweeping driveway leading to the impressive Tudor-style mansion. An attendant, wearing a reflective vest and waving a light orange signal cone, directed them to an adjacent field.