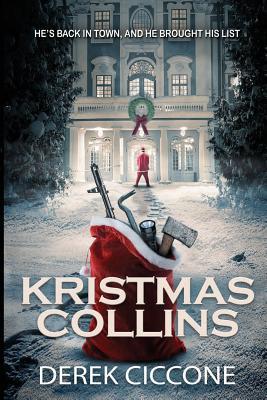 Copyright © 2012 at Smashwords by Derek Ciccone

This ebook is licensed for your personal enjoyment only. This ebook may not be re-sold or given away to other people. If you would like to share this book with another person, please purchase an additional copy for each reader. If you’re reading this book and did not purchase it, or it was not purchased for your use only, then please return to Smashwords.com and purchase your own copy. Thank you for respecting the hard work of this author.

Feedback and support appreciated at:

The Trials of Max Q

Was the name of a campy 1940’s comedy starring Barbara Stanwyck. But there was nothing funny about the modern version I was living out this afternoon—a horror film that made me want to return to the safety of prison.

My cab passed through the electronic gates and drove up the Belgian-block lined driveway. We passed rolling, snow-covered lawns, before coming to a stop in a circular drop-off area in front of the ivy-draped English manor. I was here for the Wainwright holiday party, held every year on the Sunday prior to Christmas. I was unable to attend the past three years, and I would have pushed the streak to four if not for some business that needed attending to.

I secured the envelopes that contained my gifts, placing them in the pocket of my suit coat, and grabbed the pastry dish that I’d purchased at a bakery along the way. I then stepped out into the late afternoon—the sky was a dreary gray, and a light snow had begun to fall.

I was met by a portly man in an elf costume. I didn’t recognize this particular greeter/security-guard from my previous times on the property, going back to when I used to live here with my ex-wife, Libby, during our first years of marriage. This surprised me, since the Wainwrights always made it a point to surround themselves with loyal soldiers, even if loyalty had never been a two-way street for them. Perhaps they had added extra security this year since a convicted felon was on the guest list—their favorite former son-in-law.

I started to walk in the opposite direction. This predictably upset Buddy the Elf. “Sir, the party’s this way,” he commanded.

“I’m going to take a shortcut,” I replied without looking at him.

I braced, expecting to be wrestled to the ground and kicked with the curled-up tips of his elf shoes. But as luck would have it, I noticed a longtime Wainwright security guard named Lonnie—windbreaker, winter hat, no elf costume—who nodded at Buddy, instructing him to back off. Lonnie knew from firsthand experience that Kris Collins was capable of creating a scene on a moment’s notice, and the last thing the Wainwrights wanted to do was to call attention to my presence.

I ventured over a slate path, which was lined with sculpted boxwood and ornamental trees that were decorated for the season. In the summer, the formal landscape of the estate was breathtaking, filled with magnolia trees and kiwifruit arbors. But for the party it had been transformed into a Christmas fantasy.

Music was being pumped out through speakers—“Winter Wonderland” was currently playing.
The weather outside is frightful,
the lyrics informed me. And while I would agree that it was a tad on the frosty side, I found it downright delightful compared to what was awaiting me inside.

I walked past elaborate ice sculptures, then an empty tennis court and pool house, before I began to smell the real party. I trudged through another frozen acre until I arrived at the Lake House.

It actually sat next to a pond, not a lake, and it would be more accurately described as a mansion. Like most things on this property, it was more about perception than reality. As a former attorney, who was once known as the “lawyer to the stars,” the one thing the Wainwrights and I could agree upon was that the mantra “perception over truth” had served us both well, at least financially. And now it was likely the only thing keeping me alive.

Outside of the Lake House, sitting in lawn chairs on a brick patio, and enjoying the warmth of a fireplace, were the self-proclaimed Amigos—Tomás, Gustavo, and Berto—spending their final Christmas on the Wainwright property.

Alexander Wainwright had always referred to them as “the Mexicans”—his name for all those of Spanish descent—but they actually emigrated from Peru as children. And what I’ve learned over the years about these Peruvian house parties, called
tonos,
is that you don’t arrive
manos vacias
—empty handed. So after exchanging warm greetings with the Amigos’ wives and large extended family, I handed over a panettone cake to Tomás’ wife, Mia.

I then moved to the patio area, and attempted to spread more holiday cheer. I handed each of the Amigos an envelope that contained a Christmas card. Inside the card, besides a sappy holiday greeting, was the final information regarding a project of mine—one that the Amigos had agreed to lend their considerable talents to. I’d been plotting it since my time in prison, and now we were just days away from the big moment.

Tomás motioned for me to take a seat and join them.

“I don’t have much time,” I cautioned. “I need to make an appearance at the big-boy party. Then I have a few more rounds to make tonight.”

“If that’s the case, you’re going to need a drink,” Tomás said. He got up and poured me our traditional Christmas drink—Mountain Dew and tequila, hopefully heavy on the latter.

Berto brought me a plate from the barbecue, what Gustavo referred to as a “Peruvian specialty.” I was fairly certain that a cheeseburger and tater tots wouldn’t qualify as Peruvian or a specialty, but I wasn’t about to argue.

“I’m surprised you didn’t get an invite to the party this year … sort of a going away present,” I said between bites, but wasn’t really surprised. The Amigos hadn’t been invited in the thirty years they’d lived here.

“We didn’t fit the ‘white Christmas’ theme they got going this year,” Gustavo said with a chuckle.

“Same theme as every year … the Wainwrights are traditionalists,” Berto added.

The volume of the surrounding festivities muffled our voices, which made this the ideal place to go over the final preparations. Children were ice-skating on the pond, while the teenagers were shooting off fireworks like it was the Fourth of July. Gustavo’s college-age son, Angel—a dead ringer for his father—headed up a salsa band that had attracted a group of dancers on an adjoining patio. Many of them were attractive girls in outfits that didn’t appear to be weather-appropriate.

I pointed at the envelopes. “The disc inside the card contains a complete route of all the houses and their floor-plans.” As much as technology had advanced communication, it also left proof, which is why this old-school drop and chat was the still the best way to transfer information.

I viewed the large house in the backdrop, along with all their friends and family who were reveling in the holiday spirit. Things had changed a lot since they’d first arrived here. “I’ll understand if you don’t want to go through with it. You have a lot more to lose these days.”

“What’s the point of having our gifts, if we can’t share with others. Tis the season of giving,” Gustavo responded with a sly grin. The others nodded.

Growing up in the neighboring town of Port Chester, it looked like poverty would be their destiny. That was, until the three young friends discovered a way to take advantage of this land of the opportunistic called America … they possessed an ability to rob houses like few who’d come before them. And not just any houses—the biggest and wealthiest estates in the area. The string of robberies became the stuff of legend that year … until they just stopped. The untold reason for the sudden stoppage was that Alexander Wainwright’s security team had apprehended them.

But luckily for the Amigos, eleven-year-old Libby Wainwright was convinced that there was good in all people, and just as importantly, she had her father wrapped around her finger. She convinced him not to turn them over to the police. Instead, a compromise was reached in which they would live on the Wainwright property and pay for their crimes by living as indentured servants—performing tasks ranging from keeping up the fourteen acres, to serving as the Wainwrights’ personal chauffeur.

I’m an admitted skeptic of most things Wainwright, so I’ve always had my doubts that this agreement was completely about granting a daughter’s wish, or saving a few bucks on lawn care. It would be very convenient for an institution like Wainwright & Lennox to have access to the Amigos’ talents, if they were in need of gaining private information from their competitors.

But their working agreement with the Wainwrights took an unexpected turn this year. They were being kicked to the curb so that the Lake House could be sold off. This was supposedly related to W&L’s 600 million dollar loss in a business deal gone wrong with Kerstman Publishing a few years back.

This was not news to me, since I was the one who represented Diedrich Kerstman at his trial. This didn’t sit well with the general public, as Kerstman had become the poster-child for corporate greed, and it went over even worse with my former father-in-law. When the smoke cleared my client was dead, I was in jail, and Alexander Wainwright was still out over half a billion dollars. So it went without saying that I was surprised to receive an invitation to this year’s Christmas party. Although, I was starting to get the feeling that the case was still pending. And I was the one on trial.

The Radical (Unity Vol.1) by Lynch, S.M.
Talania - a Trip Down Memory Lane... by Spears, Crystal
Captive Prince: Volume One by S.U. Pacat
The Cutting Edge by Linda Howard
The Body in the Landscape (A Cherry Tucker Mystery Book 5) by Larissa Reinhart
Don Alfredo by Miguel Bonasso
That Wintry Feeling (Debbie Macomber Classics) by Macomber, Debbie
The Marquess and Miss Davies by Amy Lake
The Runaway Princess by Christina Dodd
All That Is Solid Melts into Air by Darragh McKeon