Read Back to Me without you (Sibling Love Book 1) Online

Back to Me without you (Sibling Love Book 1) 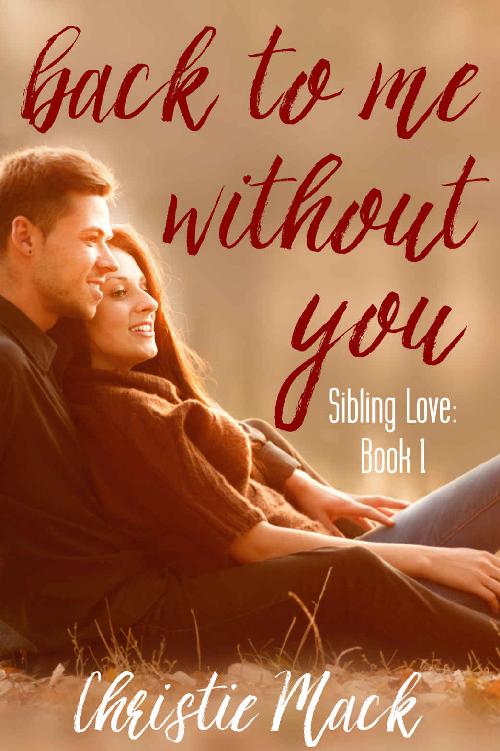 Home is Where the Heart is

Back to Me without You

Abby Carter has it all as a successful romance novelist, but when it comes to love, she’s not lucky in love. Men are just attracted to her for one thing, and she’s not interested in just sex anymore.

Abby arrives home in Sydney Australia to attend her little sister’s wedding. She’s lived in New York City home for five years now. But she doesn’t expect to fall for the charismatic best man. He also happens to be the older brother of the groom.

Sam is everything Abby should be looking for in a boyfriend. He’s good looking, has a thriving career as a doctor and driven to succeed in life just as she is.

Only Sam has his woes about love as well.

He’s recently divorced from a woman who cheated on him and only cared about racking up her credit card bill.

Will their siblings’ wedding be enough to bring two people together before they give up finding love altogether?

Thank you for always being there for me.

A
fter the death of her parents, Abby Carter didn’t think anything else would get better for her until she got the opportunity to work for a women’s contemporary magazine in the Big Apple.

Abby hadn’t wanted to accept the job offer at first. It meant leaving the only home she had ever known and the only family she had left. It was on the advice of her brother and sister that she go in search of her dreams rather than stay there to care for them. They insisted they were capable of looking after themselves.

Saying goodbye and burying her parents had been one of the hardest things Abby ever had to do. But she was determined to embark on a new life as an aspiring writer, so she said goodbye to her brother and sister, then hopped on a plane to New York City.

As the plane climbed into the clouds, Abby looked out the window and watched the familiar landscape turn to a patchwork of greens and browns, then disappear. There was no turning back now. She was heading off to the biggest adventure in her life, unsure of when she would find the courage to go home again.

O
n an August day in New York City, Abby Carter was busy tapping away on her computer in her home office. It was where she worked as a published romance novelist. Her cell phone buzzed on the desk. Jessica, her little sister, was calling. Panic set in. Jessica usually only called her if there was an issue or life-threatening emergency. It wasn’t that they didn’t talk, but they preferred to converse via Facebook or e-mail. And it worked better for them considering the continents between them.

Abby peered over at the clock on the wall.

Three p.m. That meant it had to be around five a.m. tomorrow—in Sydney.

Jessica was never awake at this hour. She liked her sleep and usually didn’t wake up before six a.m. As a child, Jessica was always the last one to wake up on a lazy Sunday morning.

“ABBY!” Jessica screeched into the phone. Abby pulled the phone away from her ear. “I’m so happy to hear your voice. I just had to call you. I have sensational news.”

“What news? What’s up?” Abby asked, her voice quivering relief and curiosity.

What the hell? Now she wished she hadn’t answered her phone at all. She never expected to hear those words come from Jessica’s mouth, but they had. And by the sound of her excited voice, she wasn’t taking them back anytime soon.

Surprise was the understatement of the century. Abby’s little sister was just twenty-one years old, and now, apparently, she was engaged.

After the death of their parents five years ago Abby, Jessica and their brother Steven only had each other to rely on as a family. Since then, Abby had made it her mission always to be there for her younger siblings. The distance between Sydney, Australia and New York City didn’t matter. She would watch out for them, no matter what. At twenty-eight years of age, Abby didn’t have any intentions to settle down, and she never expected that her little sister would, either. Jessica was still too young to settle down.

Abby wasn’t sure how to answer that question. “Of course, I’m delighted for you. You’re my baby sister. But I didn’t even know you were seeing anybody.”

“Well, I wasn’t seeing anyone until recently. I met Justin when I was out at a club a couple of months ago with my friends. We just clicked straight away. We’ve been inseparable ever since.”

“Abby, I know what you’re going to say. We haven’t known each other long. But when you know, you know. He’s the one. I can feel it. I thought you of all people would be happy for me. With Mum and Dad gone, I need you to be glad for me. You and Steven are the only family I have.”

“Yeah, well you don’t sound happy for me. You’re the first person I’ve told. Well, besides Steven. I couldn’t keep it from him. We still live together. Even if you are halfway across the world, I had to tell my big sister the news before any of my friends. I didn’t want you hearing about it on Facebook.”

“I’m sorry. I’m just blown away by your news. It’s unexpected, even for you. So when is the wedding?”

Abby had always known Jessica to take her time in everything she tried to do with her life. Abby and Steven had gotten their learner’s permit the second they turned sixteen. Jessica hadn’t gotten hers until she turned seventeen.

The Legend of de Marco by Abby Green
The Marriage of Mary Russell by Laurie R. King
Call Me Anna: The Autobiography of Patty Duke by Patty Duke
Alarm Girl by Hannah Vincent
Rescuing Julia Twice by Tina Traster
Because You Love Me (Falling for You, Book Three) by Ava Claire
DangeroustoKnow by Lily Harlem
Where Futures End by Parker Peevyhouse
Dark Moon Magic by Jerri Drennen
Deadly Journey by Declan Conner