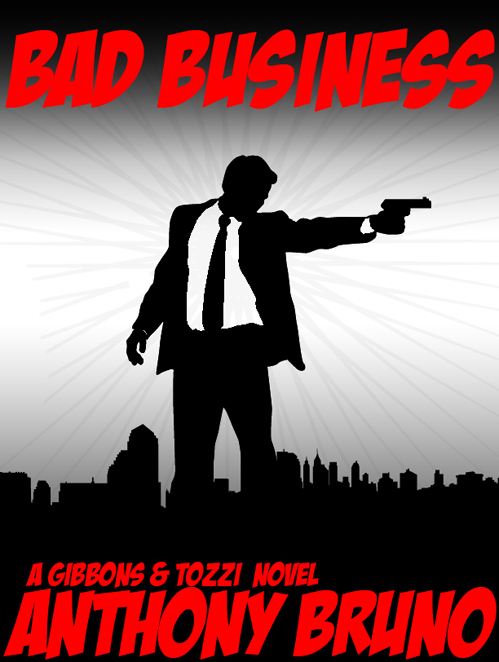 “Are you
sure
this is the right road?” Tom Augustine leaned forward in the back seat and peered out the windshield at the hot, dusty road ahead. “We've been driving an awfully long time.”

Vincent Giordano leaned over the steering wheel as if putting his face to the glass would reveal something. “Yeah, Nemo, I didn't think it was this far.”

Nemo rolled down his window and flicked out his cigarette butt. “Hey, just chill out and drive, will ya, Vin? You know, I never knew you were such nervous guys, both of yous. You're both gonna end up having heart attacks the way you're going.”

Nemo draped his arm over the seat and grinned at Augustine. “Tell the truth, Augustine. You are nervous. A little bit.”

Augustine stared at the obnoxious little man and that awful shirt he was wearingâclusters of yellow boomerang crescents on a solid black background, very fifties. The black T-shirt he wore underneath was from some health club in
Brooklyn called Jimbo's. “No,” Augustine said. “I'm not nervous.”

The engine whined as Giordano downshifted to make it up the hill.

Nemo's grin widened. He stuck another cigarette in his mouth and lit it with that neon-green plastic lighter. “Can't be nervous when you meet big shots, Augustine. You look nervous in front of these people, they think you're bullshit, tell you to go fuck yourself. I figured you knew that, though. You deal with big shots all the time, don'cha? Or is that why you lost the primary last year to that spic, Rodriguez?
All
the big shots came out for him. Guess he knew how to act in front of those people. Now he's the congressman and you're still working for the U.S. Attorney's office. Must be a real bitch, huh?”

He looked out the window of the old Mercedes across the dry brown hills to Mt. Etna smoldering quietly in the distance. The car took each pothole as a personal offense, groaning pitifully with each jolt. Nemo seemed unaffected by the bumpy ride, sitting there, enjoying his cigarettes. He was a smug little dwarf, five foot even in his Cuban heelsâmaybeâjust shy of being a genuine midget. Tremendous biceps, though. A fanatic bodybuilder and proud of it. Typical pursuit for a little man. And so smug now that he's been “made,” an official, card-carrying member of La Cosa Nostra. A
big
man now. According to Mafia protocol, he holds rank here. He's their entrÃ©e. Well, good for him. Let him be happy. Augustine knew who the real prize was. In fact, Nemo and Giordano both knew who the linchpin of this deal was. Him. He just wished his headache would go away. What
he definitely didn't need now was one of his cluster headaches.

Augustine watched as Nemo slowly brought the cigarette to his thick lips, wondering why the little man kept his sleeves rolled down and buttoned in this oppressive heat. Wiseguys had their own skewed sense of style, but Augustine didn't think that was the reason. He wondered if the midget was taking steroids intravenously and he was hiding the track marks. Or maybe it wasn't steroids. Maybe he was taking something else. Nemo did wipe his nose an awful lot. And he did have that sort of warm, self-satisfied presence Augustine had seen before. Nemo could be a heroin user. It was a definite possibility. But if what he knew of the Mafia was true, taking drugs was strictly verboten. What if they found out? How would this affect things? How would this affect
him?
Oh, Lord.

Giordano, on the other hand, looked like he could use a stiff shot of something right now to calm him down. The sweat was pouring off him, and that terrible suit of his fit like an iron maiden. Did he really think that dressing up as if he were going to his high school graduation would help his cause any? He was so terribly serious. A petty functionary out of his depth, an accountant with big ideas but no gumption. And that cologneâit was sickening. The man was pathetic. What was heâthirty-five, thirty-six?âand he groveled like a first-year law student on a summer clerkship. My God, this whole thing was Giordano's brainchild. He should be a little more take-charge about it. If he acts like this at the meeting, they may just dismiss the whole plan out of hand. Good God, how could he have hitched his wagon to these two? Why hadn't he gone directly to the top on his own? They might have listened. These two were going to bungle the whole thing.

“So what do you think, Augustine?” Nemo was grinning at him over the seat again.

Nemo laughedâor hissed, to be precise. “That's what I like about guys like you. Always so cool, no matter what.”

Augustine raised an eyebrow. “And what exactly is a guy like me?”

Nemo sucked on his cigarette and hissed some more. “Hey, come on. You know what I'm talking about. You're not a mutt, not like me and Vin here. You're old money. I bet your family came over on the
Mayflower.”

“All right, but I bet you went to some fancy prep school. And Harvard, too, I bet. Am I right?”

“See? Wha'd I tell you? I can tell just from the way you dress. The polo shirt and the khaki pants. Brooks Brothers, right? See, I wear khaki pants I look like I'm gonna go dig a ditch. Guys like you wear khaki pants and you look like you're off to play polo or something.”

Nemo suddenly pointed out the window. “Yo, Vin, slow down. This is it.”

The accountant jammed on the brakes, and Augustine lurched forward. There was a dirt road to the left, where Nemo was pointing. The crude split-rail gate was open.

Giordano stepped on the gas again, and the old car jerked forward.

A cloud of dust rose up to the windows as Giordano guided the car through the narrow gate. The road ahead was rocky and steep, and he had to downshift twice to manage the incline, the old Mercedes complaining the whole way. The fields on both sides of the road were striped with rows of grapevines twining around iron-pipe trellises.

The Mercedes's muffler hit bottom as they took a second hill, and Giordano cursed under his breath. Fifty yards ahead the road came to a dead end in a quaint farmyard with a small fieldstone house to the right, a modern structure
with drab-green prefabricated metal walls off to the left, and a weather-beaten wood-plank barn straight ahead. The diminutive three-wheeled Italian version of a pickup truck was parked in the shade of the barn. A silver Mercedes 420 sat by the farmhouse, maybe a year or two old, Augustine guessed. His own personal car back in New York was a 420. It was new.

Nemo pointed toward the truck. “Pull up over there.” He stubbed out his cigarette in the ashtray. Giordano brought the car to a stop, took it out of gear, and cut the engine. Nemo took the key out of the ignition and put it in his pants pocket. “Now, you two stay right here. I'll tell you when you can come out.”

“Too bad.” Nemo opened his door and got out. Little bastard.

Giordano turned sideways in his seat, keeping his eye on Nemo. “You think they'll go for it?”

Augustine ignored him. His headache was getting worse.

Nemo was halfway across the farmyard when the front door of the fieldstone house opened. A young man with woolly black hair poked his head out, then stepped out onto the porch. He had a gun in his hand. An oversized blue-finish automatic of some kind, the kind that holds a big clip. Your basic penis gun.

A second man came out of the house then. Short and squat, bald with a few long strands plastered across his shiny pate, tiny eyes buried in fat cheeks, an infectious smile. He was wearing a white shirt open at the neck with suit pants, conspicuously inappropriate for the setting.

“That's Nemo's boss,” Giordano whispered with great reverence. “Ugo Salamandra.” He was chewing his fingernails again and they were already down to the quick.

Augustine flexed his knee and said nothing as he studied the face of the man he'd heard so much about. He looked like Porky Pig, for God's sake.

Nemo conferred with his boss for a few moments, then he turned and waved to them.

Giordano tapped Augustine on the shoulder. “C'mon. They want us.”

Giordano bolted out of the car, straightening his tie as he strode toward the other two. Augustine forced himself to take his time, stretching his back and rolling his head on his shoulders, before he approached the others. As Nemo said, you do have to be cool with these people.

“You already know Vin,” Nemo was saying to Salamandra as Augustine joined the group. “You met before at that place in Queens. You remember. And this is Tom Augustine, the lawyer from the government.”

Augustine made eye contact with Salamandra so that the boss could see his dissatisfaction with Nemo's introduction. “Assistant United States Attorney for the Southern District of New York in charge of Narcotics. Pleased to meet you, Mr. Salamandra.” Augustine extended his hand.

Salamandra didn't even look at it. He just smiled and nodded to himself.

Augustine raised an eyebrow and looked down at him. He was very aware of the spot on his forearm where Nemo had just touched him.

Salamandra folded his arms over his chest, still smiling like an idiot. He had an exceptionally jovial face, like a happy gorilla, which Augustine found very disconcerting in a mobster. “How you like
Sicilia
, Meester Augustine?” Salamandra asked. “Is nice, huh?” His accent was almost too comic to be true.

Augustine laughed a little so as not to put the man off. These people were easily offended, he suspected.

Nemo was looking fidgety. “Look,” he said, “maybe we shouldâ”

But at that moment someone emerged from the vineyards, and Nemo stopped talking. It was a little old man in work clothes, carrying a bunch of grapes, cradling them as if they were a very small kitten in his palm. He was brown from the sun, and his face was severely wrinkled. The old man didn't look up as he ambled toward them, concentrating instead on the grapes in his hand as he plucked them off one by one, eating them with great deliberation. Augustine glanced toward the porch. The woolly-headed young man with the gun was standing at attention now.

The old man approached the group, but stopped about ten feet away. He spit out a grape skin into the dirt, then looked at Salamandra. His eyes were intense, set deep in his skull, almost black in color. Salamandra went over to him and spoke softly in that unfathomable Sicilian dialect. The old man nodded slowly as Salamandra whispered into his ear. Augustine was puzzled. He couldn't believe it.
This
was Emilio Zucchetti?
This
was the notorious Sicilian
capo di capi
, the man who brokered heroin by the truckload, the drug baron who had frustrated authorities on three continents for almost ten years now? Good God.