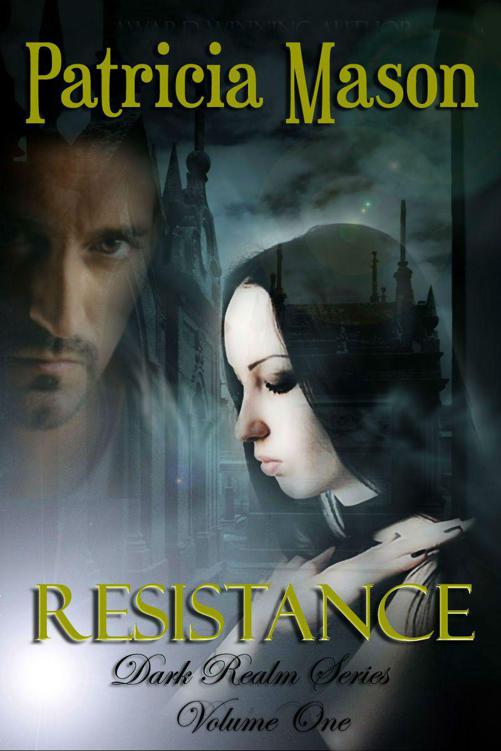 Bonus:
TRANSCRIPT OF AN INTERVIEW WITH A PRINCELY VAMPIRE.

"All warfare is based on
deception."

Sun
Tzu,
The Art
of War

Hands covered my eyes from behind and my
breath stopped.

"Daddy." I jumped and twisted
easily out of their slight pressure as I squealed with laughter.

"Happy Birthday, lambkin." My
father leaned down to press a gentle kiss against my forehead and then pulled
away with a smile, the tips of his fangs just barely showing beneath the curve
of his upper lip. My father might be a vampire but I loved him. I'd never known
anything else. Besides, he'd always been so good to me despite my being human.
My mother, on the other hand, expressed her dislike for me on a daily basis.
But I knew that was just her jealousy. She couldn't seem to stand Daddy's love
for me."

I'd been adopted as an infant as part of
Prince Leopold's Operation Re-parentage. The project required all human orphans
be placed in aristocratic homes, giving them new hope for a future life. Before
Operation Re-parentage, human orphans often died of neglect or found themselves
scrounging for food on the streets. I'd been lucky to never have a day of
hunger. Other humans had endured discrimination despite the passage of the
Equal Protection Act of 1923 decades ago. Not me. The importance of my parents
in society made me immune to ill treatment.

Yes. I was very lucky.

"You look so grown up, Amy."
Daddy stepped back and considered me from head to foot.

My new party dress was white silk and
organza. It had a fitted bodice and was cinched at my waist by a scarlet belt
tied in a bow. The billowing skirt flared out over a crinoline petticoat. My
long, dark hair had been fashioned into my first updo, a French twist.

He motioned for me to twirl and as I
obeyed, the skirt billowed around my legs.

"Is this your twenty-first
birthday?" Daddy arched one black brow and a slight curve to his lips.

"Ah, yes." His smile widened
into a grin fully revealing the sharp incisors. "How could I have been so
mistaken?"

In his tailor made tuxedo, with dark hair
slicked back, my father was the handsomest of the vampire aristocracy. Of
course, this was just my opinion and I might have been just a bit biased.

My mother, Vera, stepped into the room
dressed in a skin-tight evening gown— black to match her hair and eyes.
"Alex, stop playing with...
her
and come along downstairs. Our guests have
arrived. We are already late."

"Fashionably so, my love."
Daddy crossed the room and leaned toward her. Vera stretched up to him to meet
his lips but his own grazed her cheek instead.

"Besides, we have the guest of honor right here."
He inclined his head toward me. "They will await our arrival for the party
to truly begin."

Daddy winked at me and held out a hand. I
dissolved in giggles again. This brought a new scowl of disapproval from Vera
as she stomped out. Skipping forward, I took his hand and the two of us
followed Vera to the head of the grand staircase. At least thirty members of
the aristocracy awaited us on the next floor down. I'd met a few of my parent's
friends individually, but the occasion had been rare, and I'd never been with
them in a group.

As I stood there my knees began to shake.
For the first time that night I was nervous. This would be my introduction to
society and I wanted to make my parents—well, my father —proud.

Music played and the gathered throng
chatted. Long moments passed before we were spotted.

The music stopped, as did the murmuring. Almost as one, they
turned to stare up at us, eyes gleaming. They were all so beautiful, dressed in
finery and jewels. All for me, and my birthday.

Daddy put took my hand and put it around
his arm before leading me down slowly. "Do not fret, my pet. They will all
love you."

"You shall see. Be patient."

As we descended, the beautiful crowd
began to applaud. When we were almost at the bottom the crowd parted and an
elegant figure came toward us through the aisle they'd created. A young man,
tall and graceful and fashionably pale. His hair was worn short and he had the
slender moustache and goatee. This was the face on all the money of the realm,
His Royal Highness, Prince Leopold.

When I realized who stood before me, I
almost tripped but my father held me up. I don't think anyone noticed my
falter. We stopped in front of our monarch.

"Ah, here she is," the prince
said, a red glow lighting his eyes.

"Majesty," I murmured as I gave
a curtsey. A creditable effort, without a lurch or a stumble. "What an
honor to have you attend my birthday party. Thank you."

"Delectable Amy." Prince
Leopold smiled, his fangs gleaming in the gas-lit room. "The pleasure is
all mine."

"If
ignorant of both your enemy and yourself, you are certain to be in peril."

Sun Tzu,
The Art of War

Happy sodding twenty-first birthday,
I thought as I strode along London's
Portobello Road, toward a meeting with a fire-spitting demon.

"Thanks, but it's not my
birthday," said my companion, Lt. Howard Driscoll, glancing over his
shoulder at me as we walked.

Bollocks! I'd spoken out loud.

"Happy sodding Thursday, then,
sir." I added that last bit because even though Driscoll was a jerk, he
was still my superior officer in the Human Resistance London Regiment. Since he
was at least eight years older than me, Driscoll's age and rank should've
earned my respect, but somehow I hadn't been able to muster it up. He always seemed
to do something I considered stupid or, even worse, reckless.

Driscoll shook his head. "You're a
strange one, Amy."

"Corporal Amy," I muttered
resenting Driscoll's typical condescending tone. The other soldiers in the
Human Resistance knew me only by my rank. I wouldn't tolerate a last name. What
name would I use, anyway? My vampire father's? Not bloody likely.

"You're close though," Driscoll
said with a chuckle. "My birthday is a month from today and I plan to have
a big celebratory party."

"As if anyone would attend your
party," I muttered.

"What?" Driscoll eyed me with
surprise and then anger. Apparently, he wasn't such an arrogant sot that he
couldn't figure out I'd insulted him.

"Everyone will be too busy working
on the general's spring offensive," I said.

He smiled in reply seemingly satisfied by
my explanation. "They'll make time for me," he insisted. "I'm
very popular."

I choked down a burst of laughter and
turned it into a cough.
Driscoll and his party
, I thought with disgust. But then who was I to
laugh at him? No birthday party had been planned in my honor this year.

For a moment the memory of a party for a
thirteen-year-old slipped into my mind and I ruthlessly shut it down. What a
joke. Anyway, parties weren't for me. Frilly dresses didn't suit. I'd resemble
a giraffe with a bow about its neck if I wore one.

What was wrong with me? Sentiment usually
wasn't my thing. Besides, in the British Empire of Dorcha, I should've been
grateful just to be alive. Thanks to Prince Leopold, humans had become an
endangered species. Making it to age twenty-one these days meant you were a
tough fighter, an extremely lucky person, a genius intellect, or a bloody
coward. I sought to qualify as the first, prayed for the second, had no hope of
the third and I swore not to be the fourth.

I'd been a Resistance soldier for the
last five years and surviving on my own since three years before that. Again
the memory of that
party—
my thirteenth birthday
—
threatened. Maybe those memories
hovering at the edge of my mind was the reason I felt so soppy and mawkish
today.

Forget what happened,
I commanded myself. Ha. I'd need a
lobotomy for that.

We reached a corner. Driscoll barreled
forward, seemingly unaware of the surroundings and what might be lurking there.
He made no attempt to hide his face. I took care to stay completely hidden
under the hood of the sweatshirt I wore beneath my trench coat. Between the
sweatshirt and the heavy black wool covering of the military style coat, I was
adequately warm in the cold of the September night.

I wore my long brown tresses swept into a
style resembling a beehive with a swath hanging down my back. My hair was one
of my vanities—along with cat eye makeup and ruby red lipstick. Although
the hood crushed my hair, it also kept my identity from the eyes of every Tom,
Dick and beastie at large in the London night. Not that the slit of a moon
above provided much illumination, particularly given the foggy soup of cloud
and soot hanging in the air. However, the odd gas street light with its winking
flame cast a dim light and a human couldn't be too careful. Besides, most of
those curious and covetous eyes were able to see in the dark. My profile
couldn't be called low, though. The loud "thunk" of the heavy soles
of my knee-high boots against the cobblestones did tend to announce my
presence.

"Corporal Amy," I corrected
again as I hurried to keep up with him. "His name is Fenwick and he's not
a bloke. He's a demon and he's not to be trusted." But then I distrusted
all supernatural beings, vampires in particular...

"Which vampire controls him?"
Driscoll asked.

Was he kidding me? How had this prat
survived this long?

"Demons aren't created by a vampire
like a ghoul. They spring fully evolved out of Hell. Fenwick is an independent
contractor."

"Do you have a plan for negotiating
with him?"

Having dealt with the little fire-spitter
in the past, I knew the trick was to give Fenwick something, but not too much.
He had to get just barely enough to satisfy him but not so much that he might
think me weak. Show weakness and he'd be tempted to try to double deal, which
usually entailed death or something more unpleasant.

"We're just going to pay him for the
information," Driscoll said. "We'll figure out how much when we get
there."

At the sound of clop, clop, clop
accompanied by the roll of wheels on the cobblestones, I halted.

"Wait." I snatched my companion
from the street and into the shadowed doorway of the nearest building, ignoring
his outraged cry.

A carriage pulled by two huge black
Belgians with red glowing eyes barreled past, trampling the spot we'd occupied
just seconds before. The coat of arms on the door was blurred by the speed of
the vehicle. Once the carriage had disappeared from sight, we emerged from
shelter.

Family Pride (Blood of the Pride) by Nantus, Sheryl
Kehua! by Fay Weldon
Galactic Courier: The John Grimes Saga III by A. Bertram Chandler
To Love a Wicked Lord by Edith Layton
Mahabharata Vol. 2 (Penguin Translated Texts) by Debroy, Bibek
The Spacetime Pool by Catherine Asaro
Hope (The Virtues #1) by Davida Lynn
Seducing Chase by Cassandra Carr
Bones of a Witch by Dana Donovan
The Unseelie King (The Kings Book 6) by Heather Killough-Walden