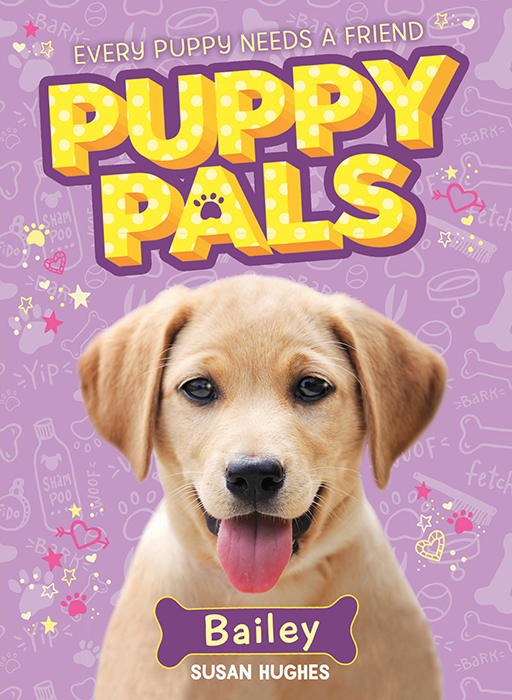 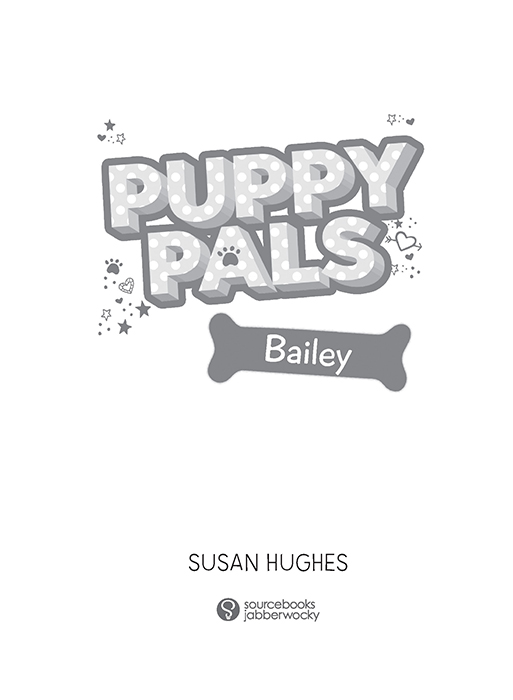 Originally published as Bailey's Visit in 2013 in Canada by Scholastic Canada Ltd.

For my sister-in-law, Carolyne Hughes, and her spaniel pals, Bella and Hailey 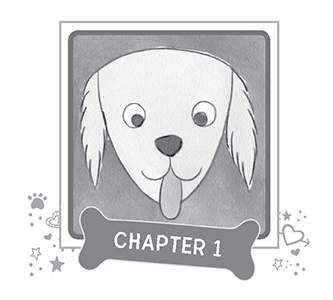 Puppies were running across the grass. Dozens of puppies.

Kat was sitting on her front steps. Her eyes were closed. She was having her favorite puppy daydream. And it always ended the sameâ¦

The puppies jump around, begging for her attention. Her mother and father smile at her. 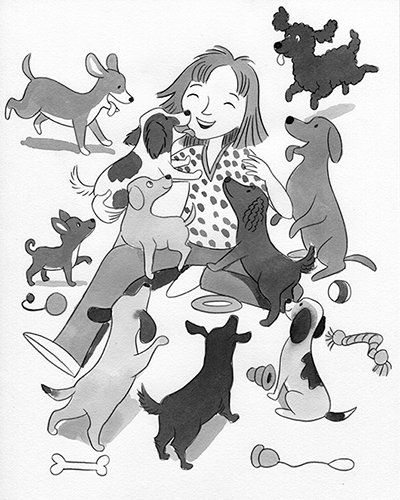 “Of course you can have a puppy, Katherine,” her mom says.

Her dad sweeps out his arm. “Pick any one you want!”

Kat smiles too. She looks at all the puppies, and she tries to choose. The little toffee-colored Irish terrier that jumps into her lap? The shy gray schnauzer looking at her, his head cocked to one side? The black pug so tiny thatâ

Aidan's running shoe nudged her leg, and Kat opened her eyes. As usual, her brother was listening to music. He pulled out one of his earbuds. “Come on, Kat,” he said. “Let's go! We're going to be late for school.”

Kat sighed. The daydream was over. She sent a mental message to the puppies:
I'll come back and visit soon!

She ran to catch up with Aidan. The sun was shining. A squirrel chattered at her from the branch of a chestnut tree.

“Do you think Mom and Dad will ever let me get a dog?” Kat asked her brother as they walked.

Aidan shrugged. “You've asked them a million times. They always say no.”

“That's because they travel so much for work. But I don't!” Kat protested. “And
I'd
be the one looking after the dog.”

Aidan bounced his basketball as he walked. “I don't know, Kat. I think you should forget about it for now.”

Kat sighed. She knew he would say that. He didn't care if they got a dog or not. Her parents both liked dogs, but she was the only one who was truly dog crazy.

Kat and Aidan reached school just as the bell rang.

“Later, alligator,” Aidan said to Kat. He hurried over to the seventh- and eighth-grade entrance.

“See you soon, baboon!” Kat called after him.

She rushed across the playground. But she didn't get in her line. Instead, Kat went over to the other fourth-grade line.

“Maya!” she called. Her best friend hung back as her class made its way into the school.

“There you are, Kat-Nip! Late again!” Maya said with a grin.

Kat made a funny face back at her. Maya had called her “Kat-Nip” for as long as she could remember. “You love dogs, but your name is Kat? How goofy!” she'd say. Maya often teased her, and Kat teased her back.

It was all in fun, since they had been best friends forever. Even though they lived on opposite sides of town, they had known each other since nursery school. They played soccer on the same team. They took swimming lessons together. Most of all, they talked about dogs together. Maya was probably the only person in the world who loved dogs as much as Kat.

Until this year, Maya and Kat had always been in the same class. But a few children had moved away over the summer. So Maya was put in the other fourth-grade class.

School had started last week. The first few days had been tough. Kat hoped it would be better this week, but it didn't seem likely.

“Joke of the day: what does a mother dog call her pups when they come in from playing in the snow?” Kat asked. 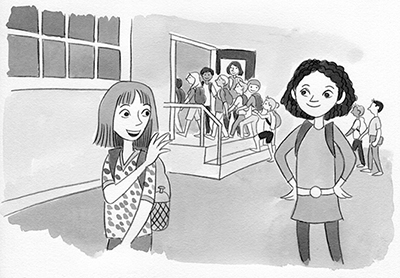 Maya thought for a moment. “I don't know. What?”

“I'll tell you at recess!” Kat said, waggling her fingertips at her friend. She turned to run toward her lineup.

“Nope! Oh, and I have some really awesome news to tell you,” Kat called over her shoulder. “Puppy news!” she added, taunting her friend.

“Seriously? And you won't tell me what it is until recess? You are horrible!” Maya put on her grumpy look, but she couldn't hold it for long. Kat started to laugh, and Maya did too.

“See you!” Kat teased. She ran to the back of her own line that had just disappeared into the school. 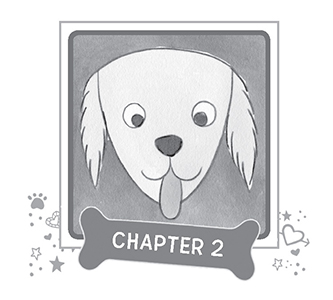 “So?” Maya asked, running up to Kat at recess. “What does a mother dog call her pups when they come in from playing in the snow?”

“Agh!” Maya groaned. She pretended to throw a tennis ball at Kat. “Take that!”

Kat caught the ball easily and laughed out loud. She loved telling jokes to Maya. Her friend always responded dramatically, either loving the joke or hating it. She tossed the ball back to Maya. They threw it back and forth a few more times.

“Okay, nextâthe puppy news. What is it?” Maya called.

Kat threw the ball back to her, but her aim was wide. “Oops!”

The ball flew past Maya and onto the field. It landed right in the middle of some boys who were tossing a football around.

“Uh-oh,” Kat said. She went to stand beside Maya.

Then Kat saw Megan and Cora, two girls in her class, pointing at her. They were giggling.

“Do you want to play with your boyfriend?” teased Cora.

“It's your own fault, klutz,” said Maya, poking her elbow into Kat's side. “You'd better go get it.”

“Come on. We'll ask your
boyfriend
to give it back to us,” said Maya, grabbing Kat's arm and heading toward the field.

“Very funny,” said Kat. She didn't have a boyfriend, and Maya knew it. But for some reason, Owen, one of the boys, seemed to get all tongue-tied when Kat was around. Sometimes he chased her when the class played tag.

It seemed like Megan and Cora thought so too.

But it was Matthew, a boy from Maya's class, who picked up their tennis ball.

As Maya marched Kat toward him, he tossed the ball up and down in his hand.

“Thanks, Matthew,” Maya said. “Can you throw it back to us?”

Matthew grinned. He threw it to his buddy Sunjit.

“Sunjit,” Kat said. She held out her hands. “Over here. Please?”

“Sure thing,” Sunjit said. He tossed the ball to Owen.

Maya and Kat stopped. They both frowned.

“So hilarious,” Kat added. Owen blushed. He froze looking at them. 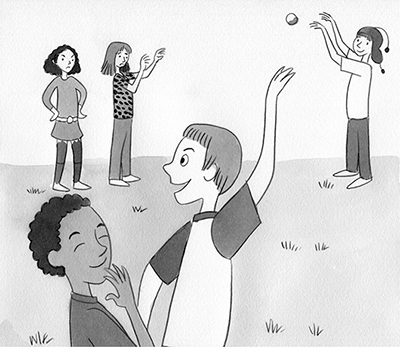 This was one of the girls' favorite games. They would name a dog breed that a person reminded them of. For example, Kat thought Maya was like an English setter. Elegant. Graceful. Loyal.

Kat looked at Owen. A basset hound? Yes, she could see it. She began to giggle. Until Maya softly cooed, “Oh, look at that face. Those lovey-dovey eyes!” 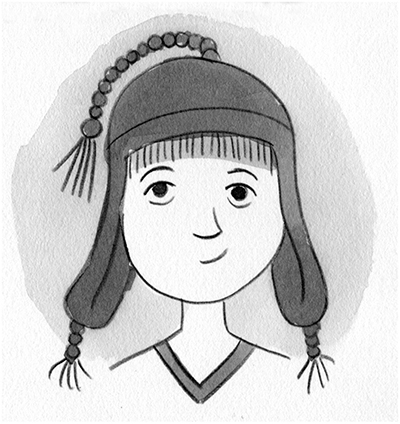 “Come on, Owen,” yelled Matthew. “Over here. What are you waiting for?”

Owen shrugged and threw the ball to Kat.

“Not back to
them
,” Sunjit groaned, smacking his forehead with the palm of his hand.

Maya and Kat laughed and ran back to where they'd been tossing the ball back and forth.

Cora and Megan were still giggling and whispering, but Kat tried to ignore them.

And just then, the bell rang.

“Line up, please, students!” called the teacher on yard duty. “No dawdling! To your lines!”

With a moan, Maya grabbed her hair and pulled at it. “I live a life of torment!” she exclaimed.

Kat giggled. Maya would make a great actress! The girls headed toward the school.

“Of course, I remember,” Maya replied, rolling her eyes.

“Lines, students! Get in your lines!” the teacher shouted again.

“Well, it's opening today! Aunt Jenn called to let us know last night,” explained Kat. “My mom and dad are going to finish work early, so we can go and see her place after school. And they said you can come with us. If you want.”

“That's so cool! We can ask my mom at lunch.” Maya looked excited. The girls took turns going to each other's houses at lunchtime. Today it was Kat's turn to go to Maya's house.

“Miss Reynolds? Do you have somewhere you need to be?” It was the recess-duty teacher. She looked at Kat pointedly.

“Right. See you, Maya,” Kat said, and off she hurried. She couldn't wait until this afternoon!