The Four Fingers of Death 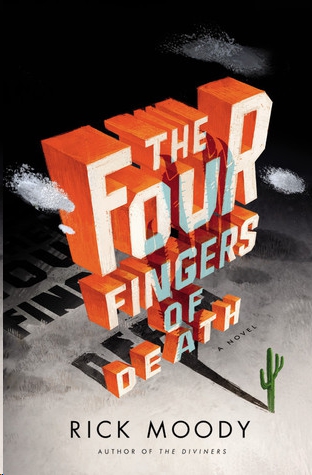 The Ring of Brightest Angels Around Heaven

In Memory of Kurt Vonnegut

THE FOUR FINGERS
OF DEATH

A Novelization, with Introduction,
Afterword,
and Notes

P
EOPLE OFTEN
ask me where I get my ideas. Or on one occasion back in 2024 I was asked. This was at a reading in an old-fashioned used-media outlet right here in town, the store called Arachnids, Inc. The audience consisted of five intrepid and stalwart folks, four out of the five no doubt intent on surfing aimlessly at consoles. Or perhaps they intended to leave the store when instead they were herded into a cluster of uncomfortable petrochemical multi-use furniture modules by Noel Stroop, the hard-drinking owner-operator of the shop in question. I’d been pestering Noel about a reading for some time, months, despite the fact that Arachnids was not celebrated for its calendar of arts-related programming. To be honest, the reason for this pestering had most to do with my wife, who’d spend her remaining time on earth counseling me on just how to boost my product. “Ask Noel,” my wife said, her eyes full of implacable purpose.

We used to see Noel at the flea market, which by now took up more than a dozen city blocks. There were more flea markets than licensed, tax-paying emporia in Rio Blanco. I had a booth there where, on weekends, I hawked old baseball cards and other sports memorabilia. In fact, I still do. Let me tell you the story.

As a child, I was heedless of America’s pastime, which was in one of its frequent popularity downturns during which the inert of the nation turned the dial instead to golf. However, once the baseball commissioner’s office allowed without prejudice performance enhancers and began to encourage the participation of players with artificial and surgically enhanced limbs, I became a devoted partisan of our national pursuit. It had always made stars of smokers, overweight athletes, coca abusers, not to mention intravenous testosterone injectors, wife abusers, biblical literalists, and persons with tonsorial eccentricities, but once it embraced amputees, baseball became a sport that any indolent person could love. Since it had become commonplace on the broadbands of our nation to feature talk show hosts with cleft palates, homunculi, or other disfigurements, and since the advent of so-called reality telethons featuring learning-disabled persons (a rapidly growing demographic sector of the populace), it was only a matter of time before a professional sport became interested in a more democratic conception of the human physique.

You may remember: the very first “enhanced” baseball player was a journeyman relief pitcher named Dave McClintock, of Columbus, OH. (He later became known in the press as “Three-in-One” McClintock, presumably because his synthetic parts needed lubrication to achieve maximum bionic effect.) McClintock was horsing around with his roommate after a minor league game—they were on their way to a disreputable watering hole outside Bridgeport, CT—when McClintock, according to later accounts, leaned out of the window of his roommate’s rental vehicle in order to jeer at some comely transgender streetwalkers. In the course of attempting to persuade McClintock to get back into the car, his roommate struck an oncoming military transport vehicle. This roommate was killed instantly. McClintock was thrown clear of the collision, his pitching arm sundered from him.

Another ballplayer, deprived of this extremity, which by reason of extensive fracturing could not be reattached, would have retired to the subdivisions of southern Ohio and spent his time shooting at squirrels using high-amperage Tasers from his collection of weaponry. Dave McClintock wasn’t this kind of a ballplayer. McClintock, by his own account, “just wasn’t good at much else.” While he recovered in the ICU of the local hospital, he pondered his fate. McClintock, he later remarked in interviews, didn’t
want
to be a pitching coach or a scout. Despite a preponderance of evidence to the contrary, Dave McClintock believed that there was a future in professional sport for a man with a mechanical arm. He might need to become a position player, an off-the-bench type, at least until the technology improved. He might need to warm the bench for a time. But, he believed, he need not give up the game.

After all, the owners and their handpicked commissioner had already determined that they could not keep ahead of the advances taking place in the demimonde of stealth performance enhancers. What was working well for athletes of the Sino-Indian Economic Compact could work for NAFTA athletes as well. It was impractical to think otherwise. Like Rosa Parks before him, McClintock saw the future clearly and
knew
. What was a mechanical arm but an elaborate kind of performance enhancement?
Sport is entertainment
, he observed in his diary entries from the hospital. Sport is not devoted to an idealized human body. Sport is not about winning, and it is not about some masculine pie-in-the-sky notion of heroism and team play. Sport is like breathing fire onstage or spitting up blood while wearing a latex devil’s mask. McClintock, with the cooperation of his agent, Phil Blank, convened a press conference on the day of his release from the Hospital for Special Surgical Interventions. Only a handful of reporters showed, and only one of them wrote a feature, but what this pimply hack from
MLB.com
discovered was a charming, upbeat, marketable ballplayer with a titanium arm, who, while grinning his relentlessly upbeat grin, waved aloft his bionic, or perhaps cybernetic, appendage and said, “I bet I can hit sixty-five homers a year with this thing!”

The masses of baseball fans could be forgiven for thinking it was some kind of stunt. McClintock, however, had an unusual bond with the locals who came to watch his Triple-A affiliate. The fans loved his grit and determination. If it was abundantly clear that he would never pitch again (he didn’t have “feel”), a bio-engineered arm did improve his hitting, as it later did for Juan Millagro, who had two arms designed by a specialist in Vail, CO, after an accident involving farm machinery. As a bionic player, Dave McClintock had a mediocre average (.234), but when he did connect with the ball, it was invariably for extra bases. There were other advantages. Like Millagro, McClintock didn’t care if he got hit by a pitch (opposing pitchers were happy to oblige), he never had elbow problems, and from left field, where he played most often, he had a cannon for an arm.

The following year, because of the minor league buzz, McClintock was brought up to the bigs as a platoon player for the Mexico City team. As a result, he was issued his first baseball card, by the venerable manufacturer of same, Topps, Inc. However, in a fit of misguided political correctness, the photographer shot him from the
other side
, so that the titanium arm was scarcely visible. This was perhaps one of those moments when the professionals at Topps were using their oracular crystal ball. Because it took a particular kind of genius, the kind that I for one possess, to know that this first “Three-in-One” McClintock issue would become one of the most collected baseball cards in the history of the game.