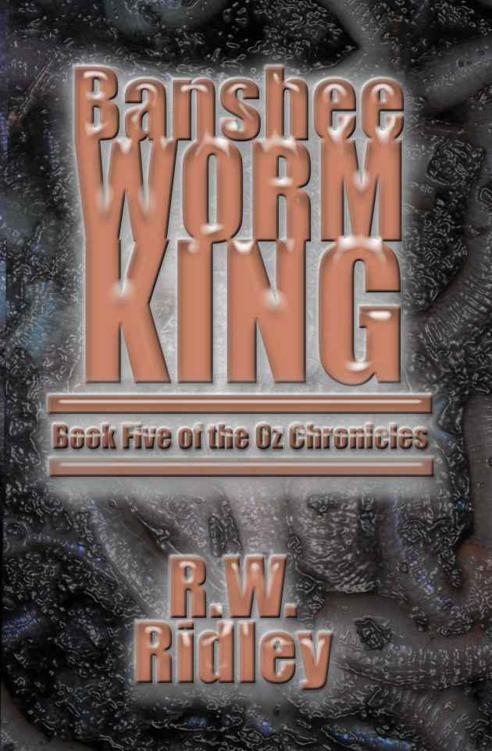 Book Five of
the Oz Chronicles

All rights reserved.
No part of this book may be reproduced or transmitted in any form or by any
electronic or mechanical means, including photocopying, recording, or by any
information storage and retrieval system, without written permission of the
publisher, except where permitted by law.

Names, characters,
places, and incidents are the products of the author’s imagination or are used
fictionally. Any resemblance to actual events, locales, or persons, living or
dead, is entirely coincidental.

For the readers
A life with purpose can only end in
honor. –

Dug
their way out of the ground and killed one of us.

My gut ties in knots every time I think about it.

We were all there, but there was nothing we
could do.

When I watched him die, I thought about Stevie Dayton.

It was his fault.

He created this world.

He did this to us. If there was a way, I was
going to make him pay. It didn’t matter to me that he was long gone.

Dead by his own hand.

Dead because of what I had done to him, how
I’d made him feel small, unimportant, like a mistake. None of that
mattered.

If I had to, I was going to
dig him up and drag him through the empty streets of Tullahoma to humiliate him
one last time.

I didn’t want to think that way.

I wanted to take responsibility for the mess
we were in, but my mind just wouldn’t let me.

I needed a bad guy to take down. I was tired of dealing with the
monsters chasing us.

They were just as
much victims in this as we were.

We were
all powerless little characters in Stevie’s stupid story.

I couldn’t believe I ever felt bad for the
way I treated him.

Before thinking thoughts I shouldn’t have been thinking
about Stevie Dayton, I stood next to a stream at the base of Cold Mountain in
North Carolina.

The area lived up to its
name.

And I hoped that was good because it meant we were out of the reach of
the Délons.

The human side of them took
over in the cold. The purple dead-eyed freaks couldn’t touch us.

I sat on a boulder and picked through the stones at my feet
so I wouldn’t have to look at the others.

I knew something they didn’t.

It scared me more than any of the ugly
beasties that we had faced.

I couldn’t
hide something like that from Wes or Gordy or... her, especially not her.

Wes maneuvered his large frame along the rocky banks of the
gurgling stream and sat across from me on another boulder.

I didn’t take my eyes off the rocks.

Boy’s had it.
April’s a haggard mess, too.

Babbling
about the things she done back at the Biltmore.

She can’t shake it out of her thinking.”

Kimball sauntered up to the stream and lapped up the cool
water.

“We gotta take time to regroup.

They ain’t in no shape to trek on down to
Tullahoma...”

“We’re not going to Tullahoma,” I said, struggling to get
the words out of my mouth.

I could hear Wes raking his fingernails against his stubbly
cheek.

“Decided a while ago.

It’s pointless. There’s nothing there for us.”

“What about the comic books?”

“That whole thing’s just a load of crap.

There are no answers in Stevie’s comic
books.”

I was avoiding eye contact with him, but I could feel him
trying to study my face. After a long pause he said, “There’s something you
ain’t telling me, Oz.”

I forced a chuckle.

“This world’s got you paranoid, Wes.

Makes sense to keep heading north and get as
far away from the Délons as possible.”

He leaned forward. “I can tell when you’re lying...”

“I’m not lying!” I stood in a rage and quickly worked to
calm myself.

He looked as angry as I felt.

Ain’t exactly sure if I understand it, but I remember.”

“It means that this twisted world is part of me. I know
it.

He was right, of course. I was lying.

I didn’t have a gut feeling to go north. I
just knew that going to Tullahoma would bring us one step closer to bringing
back normal times.

I didn’t want that
any more.

She stepped out of the woods behind me
carrying two power bars.

Wes leaned back and thought about the question.

“Little girl, things haven’t been okay for a
while now.”

She shook her head and tossed a power bar to me and then
Wes. “Don’t get smart, old man.

You know
what I meant.”

“We just decided that Tullahoma can
wait.

I peeled back the wrapper on my power bar and
unintentionally gave him a pleading look.

“Délons can’t get us up north.”

I had no idea why he covered for me, but I was glad he did.

You two
make a decision and the rest of us don’t get a say?”

I bit into my power bar and hoped that Wes would handle her
question. But he had helped me out as much as he intended.

I used chewing as an excuse to delay my
answer.

By the time I swallowed, I had
come up with the best excuse I had.

“We
need to get our strength back.

We’ll
lose Gordy if we come across the Délons or any of the other Destroyers out
there.

And April needs time to get her
head back in the game.”

She crossed her arms and huffed.

I knew that meant she couldn’t come up with a
good argument.

I had stumbled upon a
reason that actually made sense.

“That’s a good question,” Wes said with a mouthful of power
bar.

“I think the boy’s looking for Santa,” Wes said with a
snicker.

“You laugh,” I said, “but just remember who created this
world.

It’s not that crazy to think we
may come across the jolly little fat man with a belly full of jelly.”

“He
ain’t full of jelly.

His belly shakes
like a bowl full of jelly.”

“Well if
we do come across Santa, I know just what I’m going to ask him for.”

“And just what did you have in mind?”

He swallowed the last of his power bar.

Gordy was in piss-poor shape, as my grandfather used to
say.

He wasn’t bleeding anymore, but he
was sweating through his clothes despite the chill in the air.

His skin was gray and clammy.

I couldn’t bring myself to say anything to him so I kept my
distance.

I was afraid I would tell him
the truth.

I didn’t hold out a lot of
hope that he would make it to the end of the week.

April sat next to him wiping the sweat from his brow and
muttering “I’m sorry” over and over again.

I wanted to feel bad for her, but I didn’t.

I even wanted to be bothered that I didn’t feel
bad for her, but I wasn’t.

I just didn’t
feel anything.

I stretched out on the ground on my back and laced my
fingers together behind my head. Looking through a hole in the forest canopy, I
could see that the sky wasn’t as purple as it had been.

A massive head entered my field of vision.

Startled, I blinked and focused my eyes on
Ajax’s leathery face.

Pushing myself up
on my elbows, I forced a smile. “No offense, big guy, but with a face like
that, you shouldn’t be sneaking up on people.”

He slapped the ground with his huge gorilla hand and
gurgled out a playful hoot.

He sat back
on his haunches and scratched his protruding belly.

I watched him for a few seconds when a phrase popped into
my head.

Gorillas always know. Leaning
in I cleared my throat and whispered, “Do you know?”

He stuck his chin out, but didn’t give me a direct
response.

“What Stevie Dayton told me, do you know? Is it true?”

He signed something I had seen him sign before.

I searched my memory banks.

Ajax pursed his lips and nodded his enormous head.

“But does that mean you know what Stevie told
me?

Is it true what he said about Lou?”

He turned away from me.

He held out his hands and crossed them in front of his
chest with his palms in.

With the first
two fingers sticking out, he crossed the right hand from in front of the left
hand to behind it.

Lou spotted us and approached.

Just One Reason by Kirsten DeMuzio
Coming Together: With Pride by Brio, Alessia
When Sparks Ignite: Leather and Pleasure 2 by Jennifer Labelle
Ground Zero by Stickland, Rain
How to Murder Your Mother-In-Law by Dorothy Cannell
The Rescued by Marta Perry
The Collector of Dying Breaths by M. J. Rose
Gideon by Russell Andrews
Archaic by Regan Ure
She's My Kind of Girl by Jennifer Dawson