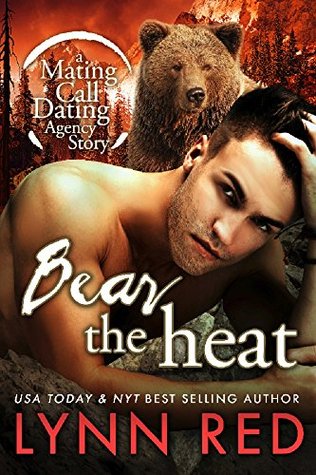 date on all my new releases, giveaways, and free books!

The Fox and her Bear

Two Bears are Better Than One (Alpha Werebear Paranormal Romance)

Between a Bear and a Hard Place (Alpha Werebear Romance)

Horns for the Harem Girl

Watch for more at eepurl.com/G1q2X.

“Get out of the way!” Breaker Hart pushed two of his fellow firefighters out of the way and ripped the oxygen tank off his back. “This building’s coming down and I’ll be damned if I let it kill those cubs!”

“You can’t go in there without oxygen. The whole damn place is up in flames. You’ll get stuck and then we’ll be down one bear.

Our only bear. Don’t do something stupid.”

Breaker shoved his boss out of the way. “I didn’t join this department to play it safe,” he said with a growl as he yanked his helmet off. “Give me that tank and that facemask. I’m getting those cubs.”

The roof of the house – an old midcentury-modern style all-wood structure – vented a tremendous plume of black and gray smoke. The chimney cracked audibly, mortar erupting from the seams as three bricks tumbled from the stack. Breaker took the mask and stared into Chief Daniels’s eyes for a second. “Don’t worry about me,” he said. “You get the rest of them out of here and I’ll meet you at the truck.”

Breaker turned back to the crumbling house as a fireball blasted into the sky. Probably the gas line, he figured. It didn’t matter. There were two raccoon kits in there, and he wasn’t going to let anything happen to them. Their sister said they were in a back room on the second story, and that level of the house
2

was going
fast
. It was now or never, and for Breaker, that
always
meant now.

He stooped over, and let his muscles rip apart the back of his fire suit.
Shit
, he thought.
That’s gonna come out of my paycheck
.

Adrenaline surged through Breaker’s neck, down his spine, all the way to his toes. He felt himself growing, twisting, becoming more animal than man. He flexed his bear claws until the knuckles cracked, and then snarled a grin at the house he was about to teach a lesson. He took these things like personal assaults, like one on one fights. More often than not, that’s how they turned out. Not only was Breaker Hart the biggest of White Creek’s firefighters, he was also one of the most experienced. He hadn’t lost anyone yet, and he wasn’t about to start.

Standing on his back legs, he unleashed a roar, and charged.

The massive oaken door cracked under his force and exploded inward, sending a shower of splinters, embers and paint flecks flying off in all directions. Breaker shook his huge head and swept his gaze from one end of the beautifully open-concept and completely engulfed house, taking in the direction he needed to go. The stairs lay ahead of him and to the right. His powerful legs closed the distance in seconds.

The first step groaned as he placed his weight on it, and when he hoisted himself upward, it bowed and gave.
Fire weakened the
whole thing
, he thought.
I better hurry or I’m going to end up a
bear burnout
. He laughed grimly to himself at his own joke as a wave of dry, hellish heat pounded against his body. He was slightly cushioned from the brutal sear by his thick coat of brown and gold fur, but it was still oppressive and dangerous, and he knew there wasn’t any time to waste. Those cubs were scared, alone, and probably inhaling God knows how much smoke.

One after another, Breaker stepped, braced himself and ascended. And, one after another, the flame-weakened stairs collapsed under his weight. He went faster, faster, and then when he found himself on the landing of the second floor, lowered his
BEAR THE HEAT

head and took a deep breath of clean air. One room to the left, one to the right.

“Where are you?” Breaker called out. “I’m here to get you both out! Which way am I going from the landing? Talk to me!”

A weak whimper that he recognized all too well as the half-conscious yelp of a raccoon kit came from the bedroom on his left. Smoke swirled in a towering cyclone that was being sucked out of a small hole that opened in the roof. “Stay with me!” he shouted, demanding the attention of the two kits. He’d been doing this for long enough that he knew the best thing to do was just keep people talking. As long as they weren’t panicked and running around, there was time, there was a chance.

And he wasn’t going to start losing people now. Not now, not ever. Breaker gulped hard, swallowing the taste of burning paint and the chemical scent of charred carpet. Something below him popped; probably a bottle that heated too much and had to give.

“Keep talking!” he shouted to the kits. “Both of you! I’m getting you out, but you have to stay with me. You have to keep talking so I can find you.”

The two were yammering, and though he couldn’t understand anything they were saying, it didn’t matter. Just the noise was enough. The smoke was so thick and pungent and awful that Breaker’s eyes burned and leaked tears. Even with his mask, he knew he didn’t have long, but then again, this wasn’t anywhere near the first time he’d been so brash when it came to rescuing some little ones.

Doors on both of the rooms were closed, but again, it didn’t matter. He placed a paw on the door to the right, and recoiled immediately from the singe he felt, then smelled, from his paw.

“Get down!” he called, and before a response came, he crashed through the door. Instinct kicked in. Breaker’s mind was blank except for the echoes he heard from the cries.

“Grab hold,” he said gruffly when he found the first kit.

“Don’t let go, we’re going to get your brother and then we’re out of here.”

“Sister,” a little voice said. The ‘r’ sound at the end trailed off, as if the kit were from Boston, and going to pawk the caw in the yawd. The little one grabbed ahold of Breaker’s fur, clinging to his back like a baby from attached to mama. “Sissy’s down the hawl.”

He felt tears on his back, and then the kid nestled down against him. “Hold on tight, I won’t let anything hurt her.

There’s a facemask around my shoulder, can you get it?”

The kid didn’t reply, but Breaker felt the tug of elastic plucking at his fur and knew the kid was safe. He edged his side against the wall and used it to guide him down the hall to the next of the bedrooms. This door was just as hot as the other, but thankfully it wasn’t latched. From inside, helpless, frightened cries met his ears.

“Maddy! We’re right here, where are you? Everything’s going to be fine.”

He had the even, trained voice of a professional diffuser.

When she answered though, weakly and out of breath, he knew there wasn’t much time. “Bed,” the voice came. “Under... bed...”

He couldn’t see, but it didn’t matter. Breaker pushed through the room, making sure to keep low enough that smoke didn’t smother the boy. He found the bed, lifted it effortlessly with a paw and flung it out of the way. The girl underneath was obviously weak and very close to unconsciousness, but this wasn’t Breaker’s first rodeo. He stood up, let himself partially shift back, just enough to be able to grab the girl with an arm.

“Okay, got you,” he said. She made a cooing sound, and nuzzled against him, but she was fading fast. “Don’t worry.”

He crossed the room to the window, bashed it open with a fierce kick, and shouted to the guys outside. “I got ‘em! Need some help here!”

A flurry of activity resulted in a massive air pillow being inflated. Just as flames licked the back of Breaker’s legs, he tossed the girl who actually laughed on the way down. She hit the pillow, rolled to the side, and immediately latched onto the fireman nearest the landing zone. When he prepared to hurl the boy, the kid was shaking his head. “You come too,” the little voice said, slightly muffled by the mask he wore. “You have to come too.”

“Tell you what,” Breaker said, “I’ll follow you down.”

Tears that could have been caused by smoke, but most definitely weren’t, stung Breaker’s eyes. “All right, kid,” he said with a grin. “Hold on, this is going to be a heck of a trip.”

The kid nodded, his little face full of grim purpose. “I got you,” he said, “I won’t let the fire hurt you, fireman.”

Breaker clutched the boy to his chest and fell out the window backwards.

The pillow collapsed under his weight, air whooshing out all around.

“Good jump,” the kid said, in the instant before his smoke addled mother ran up and took him off Breaker with a tearful smile on her face.

When the big fire bear rolled off the cushion, his back pulled and twitched. His lungs burned with smoke, but when that little kid gave him a high five, he forgot all of that, and just smiled.

This is what it’s all about
, he thought as he hugged the mother, the girl and the boy tight against his chest. “Everyone’s safe,” he said. “That’s why we do this. Now you all get to the ambulance and they’ll check you out.”

As soon as the gang was gone, Chief Daniels came up and clapped Breaker on the shoulder. “You’re a crazy son of a bitch, you know?”

With a wheeze and a cough, Breaker nodded, but didn’t respond. The hair on his neck was receding. Seconds later, he was fully human again, even if he felt more like a giant adrenaline balloon.

“But you’re the best we’ve got,” Daniels said. “You better make room on that uniform of yours. I’m guessing there’s another medal in this one for you.”

The big bear, still rattled with pain, watched the tearful family – dad had joined them – embrace and hold one another tight.

“Yeah,” he said with a growl in his voice. “But I think there’s something I want a whole hell of a lot more than another medal and my name on another plaque.”

He tilted his head toward the ambulance, and Daniels followed his gaze. “I’ve been wondering when you’d say that,”

Daniels said. “I guess this isn’t exactly the best time to tell you this, but I’ve got someone for you to talk to.”

“I don’t need to talk,” the gruff bear said. “I need to
find
. I need a mate, I need a family. But I’m guessing those things aren’t usually that easy for someone like me to find.”

“Yeah, well,” Daniels said. “Come on back to the firehouse.

Let’s have a drink, let’s have some dinner, and then I’ve got something to talk to you about.”

Without a word, the big bear followed the much smaller chief back to the fire department’s SUV. He waved off the EMTs who would normally ignore such a thing, but they’d known Breaker long enough to be confident in his ability to judge his own need for care.