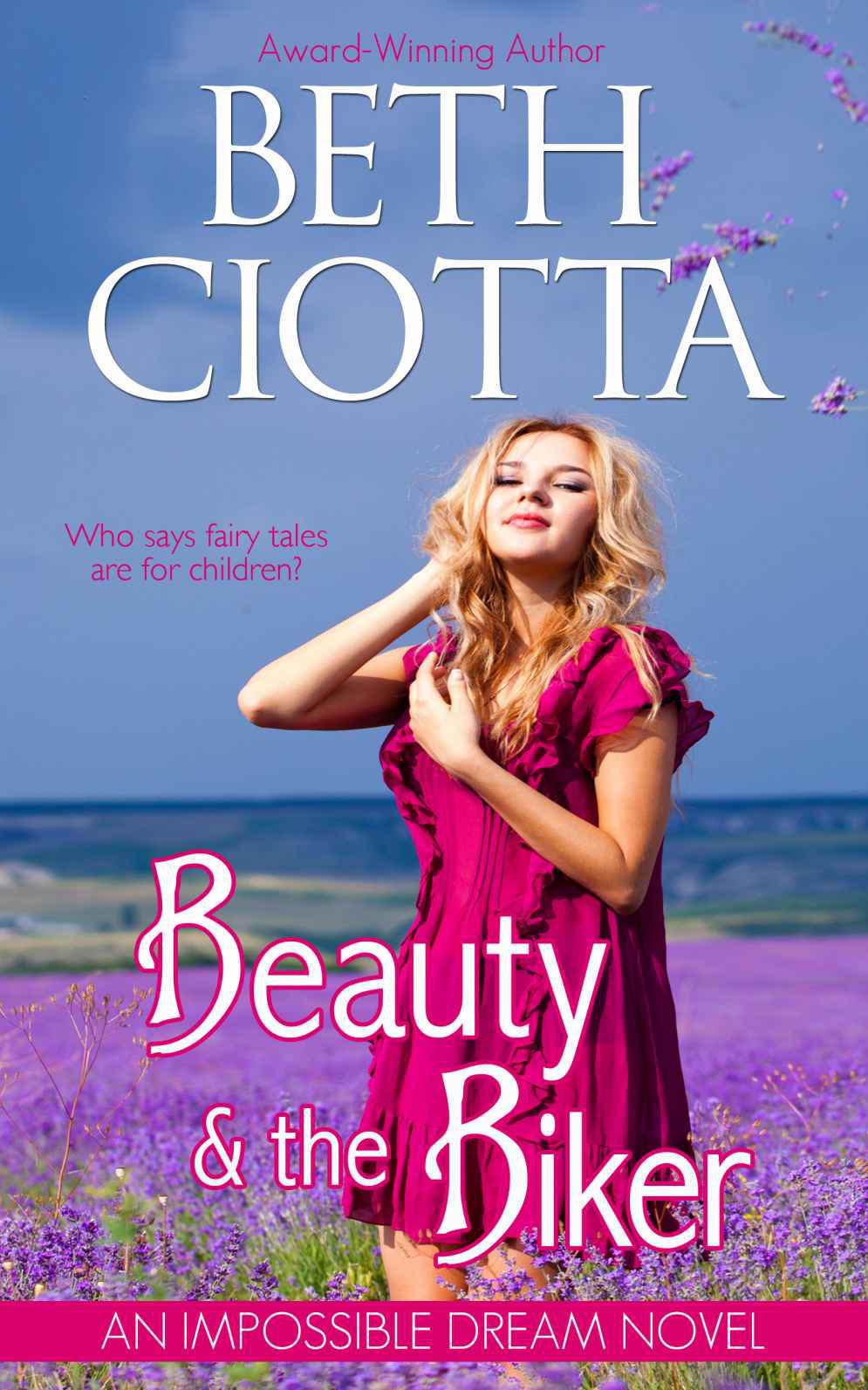 and links to her social media hangouts.

Six long-time girlfriends—known as The Inseparables—find themselves restless and battling disillusion. Tangled up in real-life troubles and stifled aspirations, they’re ready to ditch their deepest desires…until they stumble upon the peculiar matchmaking company where they each find the rare opportunity to make seemingly impossible dreams come true.

The magic begins with… Beauty & the Biker

May all your dreams come true!

“Deep love of family and strong dialogue bolster a refreshing romance that focuses on the emotional rather than the physical.” –
Publishers Weekly
(on
In the Mood for Love
)

“Ciotta can be depended on for a heartfelt romantic read. Sexy story… Clever dialogue… Likable characters…”

–
RT BOOKreviews
(on
In the Mood for Love
)

–
RT BOOKreviews
(on
The Trouble With Love
)

–
Publishers Weekly
(on
Fool for Love
)

“Ciotta’s first steampunk series blasts off with this exhilarating riff on bodice-ripping romance, hurling 20th-century technology into an alternate Victorian England. Start of a delectable series.”

“Ciotta has written another imaginative, whirlwind adventure, featuring a daring hero and a spirited heroine, incredible inventions, and übernefarious villains.”

“Rich with emotional complexity and a cast of wonderfully rich characters. An absolute treat.”

“Ciotta writes with style, wit and heart. Can’t wait for the next one!”

Once upon a Wednesday
…

Some people meditated. Some indulged in massages. Others alleviated stress via exercise or by spewing their troubles to a shrink.

Bella Mooney, children’s librarian and resident Suzy Sunshine, achieved bliss via the wonderstruck expressions and giggles of impressionable and imaginative kids. Specifically the preschoolers who attended her weekly Fun-tale/Fairy-tale Hour. They ate up her animated storytelling like a scoop of chocolate ice cream, their sparkling eyes begging for more as she finished reading one book and teased them with another.

“We only have time for one more,” Bella said, dipping into her box of props and pre-selected tales. She flashed a wolf puppet and a worn copy of
Little Red Riding Hood
. “This one?
Orrrrr
…” She crooked an ornery grin as she swapped out her booty. “This one!”

The kids squealed and clapped as she presented a bright blue book and a tall, skinny, red-and-white hat. Since the library treated Dr. Seuss like a star, Bella wasn’t surprised that the children opted for
The Cat in the Hat
. Pulling on the comical headgear, she opened the picture book and launched into the rhyming tale. As always, she read with dramatic zeal. This longtime favorite was branded on her brain so she easily lost herself in her performance and the adorable faces of her riveted audience. They sprawled around her in a semi-circle, seven tiny people with humongous imaginations. Bella basked in their innocence and wonder.

Unfortunately, these days her usually effortless ability to disconnect with reality was often short-lived. As Bella read the pages of supreme cat chaos, her mind flashed to the chaos of her own life. Nine months of upset and turmoil. Nine months of juggling the devastating effects of heartbreak and loss. What she wouldn’t give for the Cat’s magical clean-up machine to suck up the emotional havoc resulting from the death of her mom.

Felled by a stroke at age fifty-five, Laura Mooney’s passing had left Bella grappling with bone-deep sadness and compromised judgment and focus. Even so, she’d coped better with the unexpected loss than her dad. At first he’d pressed on, stuffing down the grief, immersing himself in work. But then the post office had suffered cutbacks and Archie Mooney had been forced into early retirement. Losing his job a few months after burying his wife had been a queer and cruel twist of fate. He’d been on a downhill slide ever since.

Bella had taken extreme measures, moving back home in order to battle her dad’s demons. She’d believed heart and soul he’d find comfort in her company and benefit from her dogged optimism.

Thus far her efforts to restore his zest for life had been an exercise in frustration.

Bella pushed her dad’s drinking and financial problems from her mind as she turned the page and continued to read. “Have no fear of this mess,” she quoted and although Bella showed the kids an illustration of the Cat in action, she envisioned her mom battling worries with a smile and a proverb.
Every cloud has a silver lining.
Just one of the optimistic clichés that helped to shape Bella’s typically sunny mindset.

But even Bella had her limits.

Finishing the tale, she closed the book wishing she could end this depressing chapter of her own life as easily. Her pitfalls and challenges extended beyond her dad’s dilemma. Nothing earthshattering on an individual basis, but together they taxed her bullish spirit.

A disabled car. A persistent ex-boyfriend. A dwindling checking account and rumors of library budget cuts. Even her efforts to become a published children’s author had been derailed, hampered by rejection and, most recently, writer’s block. Swear to heaven, her life was beginning to resemble an eye-rolling melodrama. Mired in misfortune and crippled dreams, Bella grew more restless and irritated by the day.

Even now, frustration encroached on her measly hour of bliss. Dividing her focus, she provided the kids with art supplies, calmly explaining a story related craft while relaying a silent plea to the universe.

I’m desperate for something good to happen. Something unexpected and magical
.

Her mind skipped to the whimsical fairy tales she breathed like air. Moral tales where good conquered evil and the deserving lived happily-ever-after. Where fairy godmothers and all-knowing wizards bewitched and bedazzled and empowered the chosen few. She loved the simplicity and the wonder these stories inspired. It’s why she gravitated toward writing similar tales herself. She wanted to breathe hope into the world. She wanted to champion goodness and love. If that made her a Pollyanna, so be it. The cynics of the world could stuff a sock in it.

The day Carson had read and scoffed at one of her original tales had been a turning point in their already dysfunctional relationship. His lack of support cut deeply. It also intensified the sting of past rejections. Although she’d only targeted a few publishers, all of them had passed on her work without offering an ounce of constructive criticism. She ended up comparing her raw manuscript pages to several published picture books and obsessing on the bold illustrations. Not for the first time, she wondered if her stories would have more impact were she to team ahead of time with an artist. Some of her favorite folk tales were accentuated by fantastical visuals.

While the children glued googly eyes on their cardboard unicorns, Bella glanced toward the shelved classics.
Cinderella
,
Sleeping Beauty
,
Rapunzel.
Her soul ached for a romantic adventure of her own design. One that started with love-at-first-sight, bypassed the drama, and segued into happily-ever-after. Given her dismal dating history and ever-hopeful heart, Bella was primed for true love. The kind that mangled your senses and swept you off your feet. The kind that melded souls and inspired ballads. The kind you couldn’t fake or force—like she’d tried to do with Carson.

A flash of movement stole her attention and her gaze shifted right. Bella flushed, her pulse tripping at the sight of a tall, handsome stranger—hot
if you went for dark, ripped, and broody—standing next to the Dr. Seuss display. She would have been enchanted by his unexpected and seemingly magical appearance, except…

The man was frowning.

“What the—” Bella batted her drooping hat from her face, tempted to match his scowl. This room was filled with wondrous books and giggling kids. How could anyone look so intensely perturbed in the midst of whimsy and youthful glee? No mistaking him for Prince Charming.

Yet her libido revved.

Unsettled, Bella made a show of inspecting the artwork in progress, applauding the kids’ creativity while sneaking looks at the intimidating voyeur.

Who the heck was he? A grumpy electrician? An impatient deliveryman? An alien-shooting government agent?

Okay. That last one was farfetched. Still. Who could blame her vivid imagination for running amok? The man was dressed in head-to-toe black—tee, jeans, boots. And what was with the sunglasses? Were his eyes sensitive to florescent lighting? Was he incognito? Too cool for his combat boots?

Bella knew everyone in Nowhere, but she didn’t know him.

Mind racing, she swiveled in search of glitter paint. Her heart pounded as a disturbing thought rooted and thrived. Realizing how distracted she was, she kicked up the cheer factor, breaking into animated chatter as she offered the kids the means to make their craft sparkle.

When she glanced back to the Seuss display, dark, ripped
,
and broody was gone.

Tension whooshed from her body.

On reflection, she was pretty sure she’d gotten her first look at her new neighbor. Even though he’d moved to the region last month, Bella had yet to formally meet the Harley-riding recluse—but that was his fault. With the exception of frequenting Nowhere’s popular drinking holes, Joe Savage avoided the town and its residents like the plague. He’d peppered his property with “No Trespassing” signs and he’d rudely rejected Bella’s personal welcome. Her friend, Emma, had spied him swigging brew at Desperado’s Den and another friend, Georgie, had crossed his path at Tank’s Auto Repair. They’d both described the badass loner as scary gorgeous.