Read Because You're Mine Online 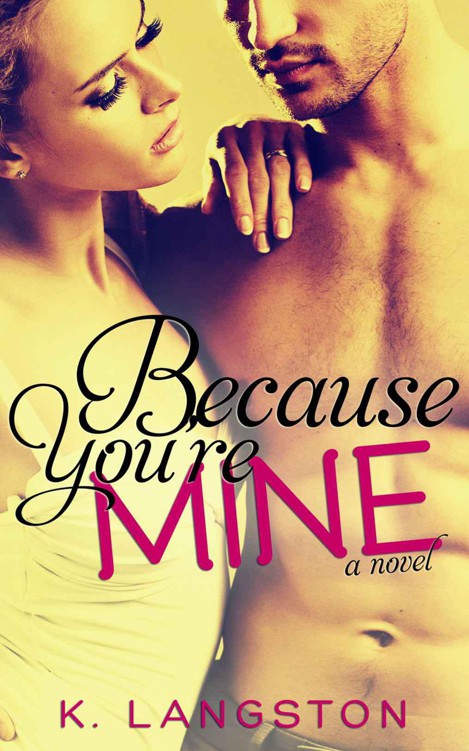 Cover Art By: Arijanna at Cover It! Designs

Without limiting the rights under copyright reserved above, no part of this publication may be reproduced, stored in or introduced into retrieval system, or transmitted, in any form, or by any means (electronic, mechanical, photocopying, recording, or otherwise) without the prior written permission of the author of this book.

This is a work of fiction. Names, characters, places, brands, media, and incidents are either the product of the author’s imagination or are used fictitiously. The author acknowledges the trademarked status and trademark owners of various products referenced in this work of fiction, which have been used without permission. The publication/use of these trademarks is no authorized, associated with, or sponsored by trademark owners.

For mature readers due to strong sexual content. (18 and older).

You never know when love will come along and change…everything.

A kiss could ruin a human life

The ache was constant now, causing me to squirm in my spot. I normally had more self-control than this, but now the unforgiving bench pressed crudely against my ass, making it hurt like hell. Anxiousness pressed down heavy in my gut. We’d been waiting for more than an hour now. I was about to go crazy.

Crossing and uncrossing my legs, I began twitching my high heeled foot in time with my racing heart. Everyone in the court room spoke softly with hushed murmurs and most looked just as edgy as I was. Reporters and camera crews littered the back walls of the court room, eager to hear the fate of the infamous doctor and be the very first to report it.

Once again, my wondering eyes fell upon Barrett, sitting just a few feet across from me on the other side of the railing. His broad shoulders twisted in his charcoal suit as he draped an arm across the back of the chair next to him. Whispering into Kingston’s ear, Barrett was likely reassuring him that all of this would be over soon and he would be, without a doubt, a free man.

“All rise,” The bailiff bellowed as the Judge made his hasty entrance into the courtroom. “The honorable, Judge Henry Adams, residing.”

“Please be seated.” Judge Adams ordered as he took his seat at the bench. Everyone heeded the order except the representing counsels and client. Judge Adams brought his large body forward then rested his forearms in front of him, clasping his hands. His strong voice broke the deafening silence. “Bailiff, please let in the jury.
”

The testimony of the victim’s sister had almost been detrimental to our case. That woman was convinced that if there was one person who wanted her sister dead, it was her sister’s controlling and manipulative husband, Dr. Michael Kingston. She had also testified in great detail about the numerous times she’d witnessed his threats of violence towards his wife, even death. But Barrett, being the slick son of bitch he was, quickly discredited her testimony. He ultimately forced her to admit to having an affair with the good doctor several years prior to her sister’s brutal death. I’d never seen someone cry so much in my entire life. Once that damning admission fell from her lips, the emotional devastation of her sister’s death, along with the guilt of her betrayal were almost more than she could take. She was a wreck by the time Barrett was through with her.

I turned my attention back to the judge, who was now opening the piece of paper that held the jury’s verdict. His practiced composure was impressive, and he showed zero emotion as he folded the paper and handed it back to the bailiff. It’s funny how the words on that simple piece of yellow legal paper could destroy Dr. Kingston’s life or set him free.

Looking over at the infamous Dr. Kingston, I watched carefully as he checked the time on his ridiculously expensive watch and adjusted the sleeves of his ridiculously expensive suit. His brash demeanor over the last several months in preparation for this trial screamed
guilt
, but the evidence said otherwise. He was arrogant, cocky, and very much in control of everything around him. The man was a real piece of work.

“Madam Foreman would you please read the verdict for the court?” The judge instructed.

“In the charge of murder in the second degree, we the jury find the defendant, Dr. Michael Kingston…not guilty.”

A collection of gasps filled the gallery. Barrett clutched Dr. Kingston’s shoulder with one hand while he gave him a congratulatory handshake with the other.

I waited until most of the court room had disbursed before I approached Barrett and Dr. Kingston. “Congratulations Dr. Kingston,” I offered my hand.

“Thank you, Miss Waters,” His voice was deep and smooth as his cold hand covered our connected ones.

I felt one, then two strokes of his thumb brush across the back of my hand. My skin prickled with revulsion. I pulled my hand from his tight grip, giving him a weak smile in an effort to hide the disgust on my face. Dr. Kingston had never done or said anything I would consider
inappropriate
, but he skated close to the line often. I won’t lie; he was a very good looking man. He was a little too old for my taste, but his dark hair and chiseled face, along with his cunning and charismatic personality, likely had many willing woman falling at his feet.

Barrett narrowed his eyes at the doctor who still had his eyes intently focused on me. Stepping away from the table, Barrett held his arm out for me to go ahead of him.

Once we were in the lobby, the two men clasped hands again. “It’s been a pleasure.” Barrett said.

“Thank you, Mr. Shaw. I could not have asked for better representation. McMillan and Shaw have my highest regard.” Kingston said.

“We certainly appreciate that. You sir, are a free man. You should celebrate.” Barrett’s hand fell to my lower back as he guided me towards the courthouse exit.

“I plan on it.” An incredibly tall blonde saddled up to his side. Barrett nodded his head with a knowing smile then urged me forward.

My body moved, but I couldn’t pull my eyes away from the man whose wife had been savagely murdered, who now was hugging this bodacious blonde’s ass with the same hand that
still
adorned his wedding ring. The man had balls the size of cannons. Kingston’s hand threaded through the blonde’s long curls just before he pulled her down for a passionate kiss.

During this whole trial, I never once questioned his innocence. He was difficult to talk to at times, but he had a solid case. The state’s evidence had all been circumstantial.  Hell, he was in another country when the murder occurred. Seventeen witnesses testified to that under oath. It was as open and shut as they come.

This was the first time I’d ever doubted him. And that was seriously fucking with my head.

Barrett laid his briefcase and suit jacket across the backseat of his Mercedes, then slipped into the driver’s seat while I slid into the soft leather beside to him.

“Do you really think he’s innocent?” I snapped my seat belt in place.

He loosened the knot of his cherry red tie. “Doesn’t matter what I think, only matters what the evidence proves.”

“Well, what if he did do it? Even though the evidence proved he didn’t. It happens all the time.” I informed him.

One hand flexed around the steering wheel while his free hand found its way to my nylon covered knee, giving it a gentle squeeze.               “You can’t think that way, Madison. The evidence is all that matters. Not what I think. Not what you think. And not what the jury thinks. We proved his innocence beyond a reasonable doubt. It’s done.” Barrett reassured me, licking his lips.

My eyes darted from his upward moving hand to his stunning profile. His sandy blonde hair was styled in an unkempt fashion, and his eyes sparkled with lust every time he looked at me. The man was insatiable. We may not be a couple, but the need we had for one another was mutual and incredibly hard to resist.

Shifting my legs, I adjusted my pewter skirt and tugged the hem down closer to my exposed knee. Irresistible as he may be, I still tried to play a little hard to get. And I always failed.

His strong hand denied my efforts, making its way up my inner thigh. My body buzzed from his touch and a spike of heat nestled low and deep in my belly. A satisfied hum rattled his throat as his hand fondled the top of my stocking, caressing the black lace hugging my upper thigh. My breath came in hard pants as he pulled my panties to the side. Soft fingers pushed through my slit, pulling a heated gasp from my lips. Blood pumped wildly through my veins at the pleasure of his hard fingers gliding with ease through my slick, wet folds. “I’ve been thinking about this all morning.” Adjusting his hand, he pushed two fingers deep inside of me.

My right hand gripped the door handle while my other hand fisted the fabric of my skirt, pulling it up further, giving him full access to what we both desired. Barrett shifted his attention back and forth from me to the road while his fingers did a damn fine job of drawing in and out.

But I needed more.

Dropping my four inch heel to the floorboard, I propped my foot up on the dash and grinded my hips against his eager fingers. This couldn’t be safe and the passersby did not go unnoticed. Just the mere thought that someone could see what Barrett was doing to me had my entire body tightening all over and warmth spreading throughout. With a low mewl leaking from my lips…I came against his steady hand. Barrett began to slow his movements. Sweat seeped from every pore of my body as I struggled to catch my breath.

What the hell was he trying to do to me?

We were headed back toward the office, and I was gearing up for round two.

Barrett pulled to park in his usual spot inside the parking garage. His body shifted quickly and before I could blink, he was on me.

Barrett had never kissed me on the mouth before.

Our relationship was strictly physical.

That was what we agreed upon when this whole thing started. Yes, of course I knew sleeping with my boss was a bad idea. However, Barrett’s persistence combined with his good looks and strong sexual appetite made him impossible to resist. Relaxing back into my seat, I gave in to him. His kiss was aggressive, but there was a softness to it as well, and I bathed in the attention he showed my mouth.

Why was Barrett kissing me now? When he had stated so clearly before that this type of intimacy was not something I should expect from him. That thought quickly fled my brain the moment his hand found its way back between my legs.

“
Fuck
,” Tearing his lips from mine, he bolted from the car.

Shock and confusion riddled my every thought. I watched as Barrett paced back and forth next to the car. He opened the back door, retrieving his brief case and coat.

Collecting a deep breath, I took a moment to inspect my appearance. I smoothed a few arrant hairs and reapplied my lip gloss.

Open your eyes look within.