Read Becoming American: Why Immigration Is Good for Our Nation's Future Online

Becoming American: Why Immigration Is Good for Our Nation's Future 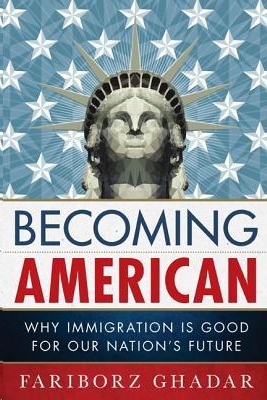 Why Immigration Is Good for Our Nation’s Future

All rights reserved.
No part of this book may be reproduced in any form or by any electronic or mechanical means, including information storage and retrieval systems, without written permission from the publisher, except by a reviewer who may quote passages in a review.

Becoming American : why immigration is good for our nation’s future / Fariborz Ghadar.

Chapter 1: Beyond the Numbers

Chapter 3: How Did I Get Here?

Chapter 4: What It Takes to Uproot Yourself

Chapter 5: How Did She Get Here: Margaret Ghadar

Chapter 6: Why Do They Come?

Chapter 7: How Did He Get Here: Zbigniew Brzezinski

Chapter 9: How Did He Get Here: Salomon Garay

Chapter 10: Paying It Forward to the U.S. Economy

Chapter 11: How Did He Get Here: Yoon-shik Park

Chapter 12: The Bimodal Nature of Immigrants

Chapter 13: The Lure of Clusters

Chapter 15: Prejudice Exists, But So What?

Chapter 16: Sticking to Your Own May Work, But It’s Not Easy

Chapter 19: How Did She Get Here: Otessa Ghadar

Chapter 21: How Did He Get Here: Michel Amsalem

Chapter 22: Can You Go Home Again?

Chapter 23: Lessons for the Next Generation

B
ecause the significance of the immigration issue has recently been escalating, I have decided to publish
Becoming American: Why Immigration Is Good for Our Nation’s Future
. As an immigrant myself, this topic is extremely close to my heart. While writing my book, I took a unique approach—one that weaves statistics, research, and theory with personal narratives and case studies. The book’s publication has been encouraged by a number of scholars whom I would like to thank for their insight and support. In particular, I thank my Penn State advisory board members: Nabeel Al-Amudi, James Boland, Jim Clay, Gerald Kessler, and Laura Kohler. They, along with Andrew Schwartz from the Center for Strategic and International Studies (CSIS), convinced me that now is the appropriate time to publish my manuscript, and then they encouraged me to do so.

Becoming American
would not have been possible without the help of a competent and enthusiastic core group of four people who served as researchers, writers, and editors throughout its process. I owe my gratitude to Hortense Fong, who was in charge of coordinating the project while also tirelessly researching and editing many of the chapters; and to Kathleen Loughran, who worked closely with Ms. Fong to ensure that the manuscript was well researched and properly edited. I would also like to thank Holly Graff, who was principally responsible for conducting many of the interviews featured in this book. Additionally, Nancy Dull, who (as always) helped to organize many of the documents and sought out permissions for many of the charts, also deserves my appreciation.

Of course, an immigration book largely told through the voices of successful immigrants could not have been completed without the gracious help and participation of those people willing to share their stories. Thus, I would like to thank Michel Amsalem, Zbigniew Brzezinski, Salomon Garay, Margaret Ghadar, Otessa Ghadar, and Yoon-shik Park—all of whom were willing to be interviewed and serve as case studies.

N
o one can rightly deny that what helped make America strong—economically, governmentally, politically, and militarily—have been immigrants. They came and continue to come to this country with grand ambitions to succeed in an open and free society—not to ride the dole, not to kick back, but to succeed and to do well.

These virtues were and unfortunately are still not always recognized, particularly in times of national tension or economic stress, when reactionary forces pursue obstacles to block the immigrants’ paths toward assimilation and success.

Our nation’s prosperity, however, is built on the renegade, risk-taking, entrepreneurial concoction of truly American innovation and invention. Wave upon wave of immigrants bought into the American Dream that anything was possible in the United States, and anyone who put in the effort could succeed here.

As an immigrant myself, I know the path an immigrant must take in order to succeed in this country. Additionally, as an academic, entrepreneur, and business consultant, I clearly see that “the continued failure to devise and implement a sound and sustainable immigration policy threatens to weaken America’s economy, to jeopardize its diplomacy, and to imperil its national security.”
1

In an attempt to frame the current immigration debate in real terms, I have put faces on the statistics in order to avoid falling back into knee-jerk positions based on ignorance, fear, and racism. In addition to sharing my own personal experience as an immigrant, I have interviewed a number of immigrants who have not only achieved the success that they originally envisioned, but also who have helped shape our nation in significant and public ways. These immigrants have started companies in traditional as well as brand new fields of endeavor. They have created numerous jobs, have launched new industries, have educated thousands, and have helped grow our economy. Others have had a lasting and significant impact on our public policy roles both domestically and internationally. They have also promoted the privatization of global economies working within U.S. policy; have strengthened our relations with many developing and developed nations, most notably China; and have influenced the direction of the Cold War. Their stories help to flesh out the identity of the immigrant as inspirational innovator.

The results of my research and work are self-evident but nonetheless profound: no matter where you live or how you earn a living, immigrants will have made a significant impact on your life and on your career. They are not only the ones who have shaped the history of the United States but also they are the ones who are shaping our future, and how we treat them will lead to either our success or our downfall. This book is about these forces and their impact on our futures; in it, I have identified some of the key issues to be considered in this hot debate, their implications, and policy considerations for both the government and for the businessperson.

If you are a parent, a CEO, a manager, a student, an entrepreneur, a policymaker, an educator, or simply a concerned citizen (or a number of those things at once), you have important decisions to make and goals you want to achieve. Whether you realize it or not, immigrants will always play a role in each of these areas. My book is a new way of seeing one of the single most important, yet often overlooked, factors in the attempt to navigate the future.

Each of us is a decision maker. As parents, we need to decide whether to enroll our children in French, Spanish, or Chinese. As business leaders, we need to allocate resources, design new products and services, or develop marketing plans. As investors, we ponder whether health care, green technology, or emerging markets are the next growth areas. So as citizens or policymakers, immigration is one of the key issues we need to watch, as it relates to the developments taking place in our communities, our nations, and throughout the world. With proper knowledge, we can help steer all those choices in the best direction. What is more, we need to make those decisions not based on current reality but on the reality that will be in place five to twenty years from now. We cannot fail to address the impact that immigration will have on our future if we want to accurately plan for the reality of our tomorrow.

In this book you will come to know some immigrants and what the experience of being an immigrant has been like from their own perspectives—not just to understand the mind-set of the immigrant, but also to provide the perspective necessary to view the landscape of the future.

B
efore I begin telling my own story and those of other immigrants, I thought it would be helpful to expose some wildly accepted misconceptions about immigration. Here, I have identified seven myths, and through presenting the reality, I hope to aid readers in being able to approach this book with an informed, open mind.

MYTH #1: AMERICA CONTINUES TO BE A NATION OF IMMIGRANTS

While America at one point had a huge influx of immigrants, today the picture is quite different. Although the number of immigrants residing in the United States is almost four times what it was one hundred years ago, the percentage of the total U.S. population (about 13 percent) is not at an all-time high. Indeed, America’s rate of foreign-born population is now on par with that of France and Germany.

The Forever Bridge by T. Greenwood
The Collector Book One: Mana Leak by Daniel I. Russell
Distortion (Moonlighters Series) by Blackstock, Terri
Tara Duncan and the Spellbinders by Princess Sophie Audouin-Mamikonian
The Valhalla Call (Warrior's Wings) by Currie, Evan
Requiem for a Dealer by Jo Bannister
When the Air Hits Your Brain: Tales from Neurosurgery by Vertosick, Frank, Jr.
The Renegade: A Tale of Robert the Bruce by Whyte, Jack
Dance Till you Drop by Samantha-Ellen Bound
George's Grand Tour by Caroline Vermalle