Read Becoming American: Why Immigration Is Good for Our Nation's Future Online

Becoming American: Why Immigration Is Good for Our Nation's Future (9 page)

In the twenty-first century, millions of people around the world are affected by the experience of migration. While the United States attracts the largest number of immigrants, when looking at the percentage of immigrants out of the national population, Singapore, Israel, Saudi Arabia, and Canada all surpass the United States in percentage. Immigration is transforming nations the world over.

While the absolute number of immigrants in the United States is at an all-time high, the rate of immigration today is actually lower than it was during the last era of mass migration, when Europeans began a massive exodus from the Old World. Further, while there was a peak in unauthorized migration in 2000, the rate has dropped dramatically (over 60 percent) a decade later.
6 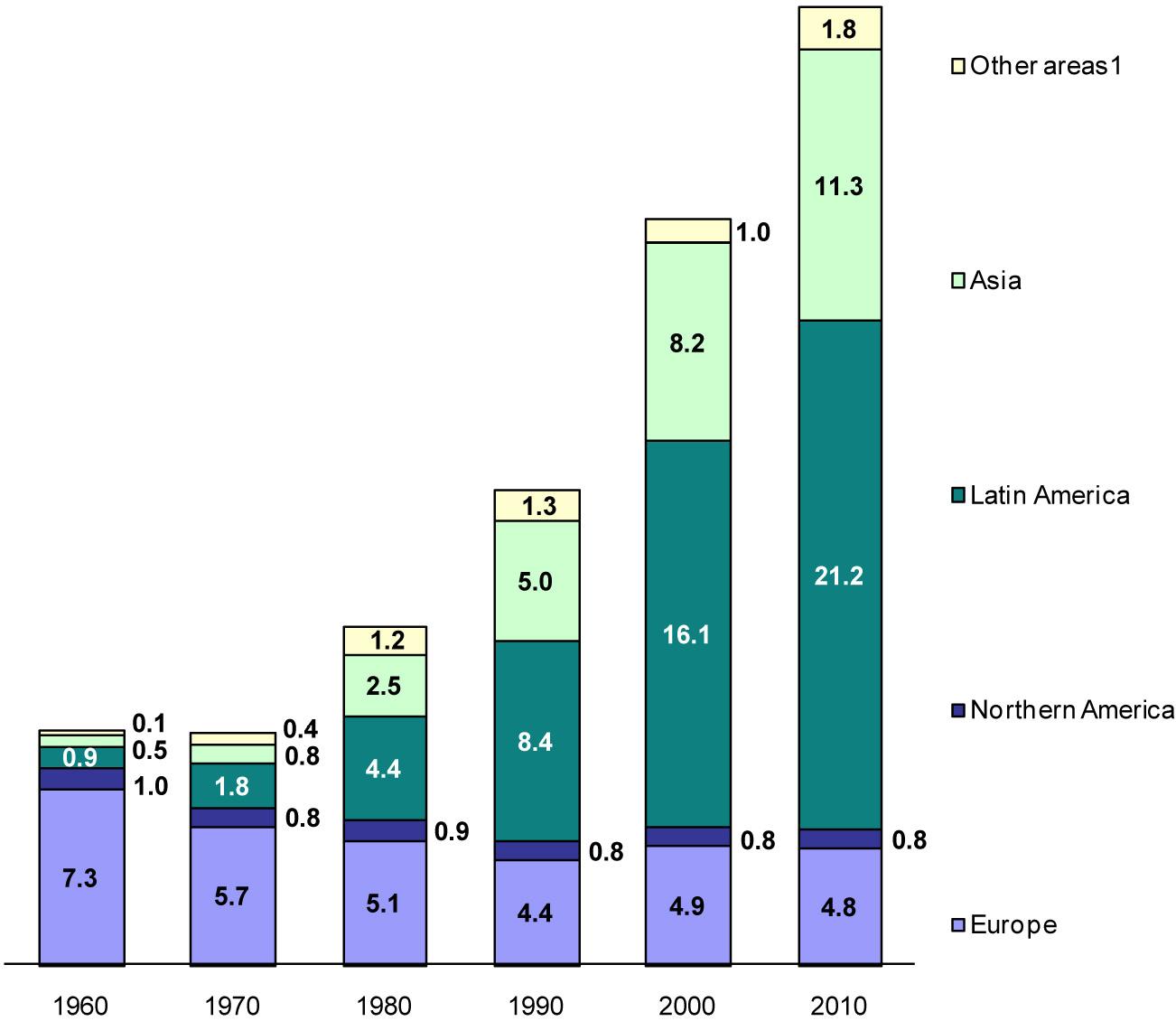 Since 2007, when 11.8 million unauthorized immigrants—most of them from Mexico—entered the country, illegal immigration has been declining. According to a February 2010 report complied by the U.S. Department of Homeland Security,

According to “Nation Digest” in the
Washington Post
, the decline in 2008 and 2009 “coincides with the national economic downturn” and “marked the first back-to-back drops in the number of illegal immigrants since the federal government allowed many to obtain legal status after a 1986 amnesty.”
7

We have all heard the age-old adage that America is the land of hope and opportunity, but there may be a darker side: Is there enough hope and opportunity to go around? Are there hoards of immigrants from Mexico constantly trying to sneak over our border and steal our jobs? Many people in the United States believe that the Mexican economy is a mess and the country is run by drug cartels, so Mexicans come running to our homeland to take a slice of the American Dream.

In the state of Puebla, the source of hundreds of thousands of immigrants to the United States, the economy grew at a 6.6 percent rate in the fourth quarter of 2012, and the unemployment rate in Puebla was just above 4 percent in April 2013.
8
The U.S. unemployment rate during the same time period was 7.6 percent. Opportunities exist in Puebla, yet the citizens still decide to immigrate to America. They immigrate to America because they buy into the American Dream. They believe that they can make a better life for themselves. Yet the Mexican economy has consistently outperformed the U.S. economy for most of the past forty years. Specifically, in the decade of 1970 to 1980, Mexican GDP grew at an annual rate of 6.7 percent. Even in 2012, the Mexican economy grew at 4 percent, while the U.S. economy grew at 2.2 percent. Mexico’s rapidly growing economy may reduce the incentive for Mexicans to immigrate to the United States. As the economy of Mexico continues to grow faster than the United States’ and the birthrate of Mexico continues to decline, the attraction of the United States will continue to rely on the American Dream. The 2008 to 2009 decrease that coincided with the U.S. economic downturn could signal a turning point in Mexican immigration, or it could simply be a hiccup. On the other hand, the attractiveness of a growing Mexican economy may cause a fading of the American Dream and the reduction of the type of immigrants that come from Mexico that our aging demographic requires.

Just as America can open its Golden Door to those “yearning to breathe free,” it can, particularly in times of great stress, turn on the “foreigner,” blaming him for taking away jobs or harshly generalizing his behavior or motives based on race and religion.

Yet if foreign-born workers have always been drawn to the United States, our reliance on them to boost our economy is less understood.

Generations of policymakers around the world have successfully promoted the expansion of trade in goods, services, and capital across international borders, regulated by a wide array of multilateral institutions and agreements. Yet migration—particularly from developing countries to developed countries—continues to be defined primarily as a matter of national sovereignty, where governments impose arbitrary numerical limits unrelated to global economic forces or even domestic labor demand. As a result, immigration that exceeds those limits is viewed simply as a law-enforcement issue largely unconnected to economic policy.
9
Where U.S. immigration policy does address economic realities is in the H1-B visa classification for highly skilled workers. However, the caps, quotas, and numbers do not address the real demand of the economy.

This outdated view of immigration would seem to imply that migration is something that occurs in spite of globalization rather than because of it. In fact, much of modern-day migration, especially from developing to developed nations, is an intrinsic part of globalization. However, arbitrary numerical limits on immigration are much lower than the actual movement of workers across national borders. As a result, a large share of this labor migration has been driven underground.
10
Illegal immigrants still continue to uproot themselves and to risk their lives to come to the United States in the hope of a better life.

The immigrants’ story, though, is far more than just the journey to the Golden Door and the struggle to succeed in the “New Colossus.” It is about the achievements made by millions of immigrants; achievements that not only lead to their great success, but also to the great success of that idea that is called the United States of America. It is not a coincidence that immigrants thrive on and drive future-oriented industries.

One geographical example of significant immigrant contribution is that of Silicon Valley. It was in 1971 that the phrase “Silicon Valley” was coined by Don Hoefler to describe the mass of electronics firms mushrooming in Santa Clara County. “He pioneered the coverage of Silicon Valley as a distinct community,” said Michael Malone in his book
The Big Score
, chronicling the industry. He goes on to aptly describe how we now “think of Silicon Valley as a collection of characters and eccentrics.”
11
This was the same year that Intel created the world’s first microprocessor, the Intel 4004.

Silicon Valley flourished and continued to generate additional startups. But why was Silicon Valley so different from older industrial regions such as Detroit and Pittsburgh, where entrepreneurial ventures were swallowed up into a handful of big firms?

Professor AnnaLee Saxenian decided to investigate this phenomenon and researched the contrast between the relative decline of the minicomputer industry along Route 128 (Massachusetts’ long-established engineering hotbed) with the success of the upstart ventures south of San Francisco.
12
Key to the difference in outcomes, Saxenian argued, was the disparate cultures of the regions. Route 128 technologists, working in abandoned textile mills, created large, bureaucratic firms that jealously preserved corporate autonomy and secrecy, seeing no reason to collaborate on projects or to share technologies. By contrast, the engineers in what came to be called Silicon Valley forged a spirit of joint enterprise along with their counterparts at Stanford, Berkeley, and other local institutions. As Saxenian explained,

Far removed from the East Coast centers of political and economic power, everyone in Silicon Valley in the ’70s felt like an outsider, so they banded together to work cooperatively. They shared information freely, moved frequently between companies and invested earnings in other people’s ventures. Venture capital and other professional services emerged to support a continuing flow of new start-ups and a more open, networked model for growing them.

The resulting decentralization gave Silicon Valley an edge in the unstable business environment of the 1980s and 1990s. While Digital, Wang, and other giants that anchored 128 ran aground on the shores of rapid change, Silicon Valley’s networks of specialized startups and team-based firms were able to adapt quickly to circumstances, sailing beyond defense work into semiconductors, computer hardware, software, Internet, e-commerce, web services, and applications.

In “Silicon Valley’s New Immigrant Entrepreneurs” (1999), Saxenian showed how the original Silicon Valley demographic, “mostly white guys from the Mid-West,” had expanded to accommodate a growing number of engineers, who had originally come overseas for graduate school.

“Most of what we previously knew about immigrant businesses focused on small firms with marginal jobs: the Korean grocer, the Chinese textile worker. But in Silicon Valley I found immigrants starting companies that stood at the leading edge of technology in the global economy,” Saxenian said.
13
Immigrants perfectly fit into the adaptive model of Silicon Valley, for the characteristics needed to start a new life and to assimilate into a foreign culture are much like those needed to survive in an ever-changing and competitive technological world.

Though many immigrants have found success in Silicon Valley, it is not the only hub that has attracted promising immigrants. The immigrant’s typically strong work ethic, persistence, and adaptability often make him suitable for multiple career paths, within one lifetime. Zbigniew Brzezinski—who has worked in academia, for the U.S. government, and as a leader—is a perfect example.