Read Before I Say Good-Bye Online

Before I Say Good-Bye 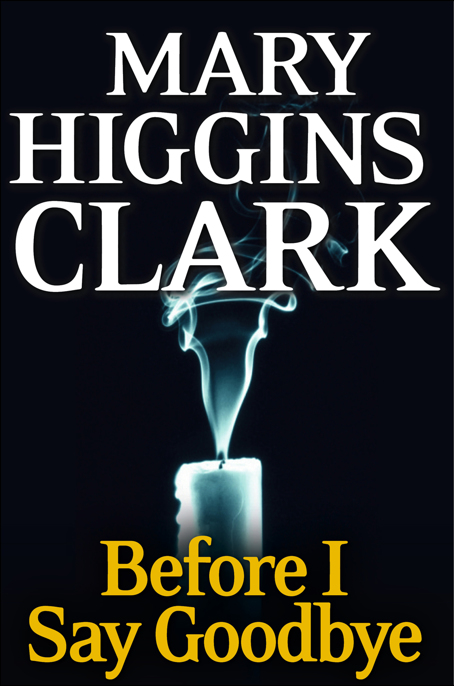 Acclaim for the Queen of Suspense

MARY HIGGINS CLARK
and
BEFORE I SAY GOOD-BYE

“Mary Higgins Clark knows what she’s doing. . . . This savvy author comes up with something unexpected. . . . A hold-your-breath ending.”

“Romantic suspense has no more reliable champion than Mary Higgins Clark. Her characters are . . . breezy and fun, and so is this confection of a book.”

“For someone who loves plot, Mary Higgins Clark’s
BEFORE I SAY GOOD-BYE
should be like manna from heaven. . . . America’s ‘Queen of Suspense’ clearly knows what her readers want. Here she provides it, in spades.”

“A smooth and easy read.”

“The storytelling skills of the newest grand master of mystery writing have never been better.”

“Clark holds the reins the whole way through this tale of mischief and secrets, allowing us to unwind her labyrinth of hidden clues only as she wants them to unfold.”

“Yet another pearl Clark can add to her worldwide bestsellers.”

“Fun and exciting. . . . Clark provides her myriad of fans with another enthralling tale filled with action and adventure.”

“Fascinating enough that I read it through in one sitting. . . . Well worth reading for all your mystery fans.”

“Short chapters and quick cuts from character to character add piece after piece to a whodunit puzzle that keeps readers riveted.”

“One of her most ambitious efforts in years, guaranteed to please her legions of hard-core fans.”

“Vintage Mary Higgins Clark with lots of action and a terrific climax.”

“Characters so interesting the reader can identify with them in an instant.”

Saturday and Sunday June 17 and 18

Mary Higgins Clark Talks About Her Life and Work

Many thanks for 25 wonderful years

Once again it’s time to say—How can I thank thee—Let me count the ways.

My gratitude contiues to grow with each passing year to my long-time editor, Michael Korda, and his associate, senior editor Chuck Adams. They always encourage, always persevere, always say the right words along the way.

I’m forever grateful to my agents, Eugene Winick and Sam Pinkus. They find answers before I ask the questions. True friends, indeed!

Associate Director of Copy Editing Gypsy da Silva is always there with her eagle eye and heavenly patience. Again and again, thank you, Gypsy.

Thank you Chief Warrant Officer Lionel Bryant of the U.S. Coast Guard for being my giving and thoughtful expert on the likely post events of an explosion in the New York Harbor.

Sgt. Steven Marron and Detective Richard Murphy, Ret., NYPD, New York County District Attorney’s Office have given marvelous guidance about what
police procedure and investigation would unfold if the events depicted here had been actual happenings. Thank you. You’re great.

My deep gratitude to architects Erica Belsey and Philip Mahla and interior designer Eve Ardia for being my experts on the architecture and design questions I posed to them.

Dr. Ina Winick is always there for me to answer my psychological queries. Bless you, Ina.

Many thanks to Dr. Richard Roukema for his thoughtful analysis when I asked him hypothetical questions.

Many thanks to Diane Ingrassia, Branch Manager of the Ridgewood Savings Bank, for answering my questions about safe deposit boxes.

Always my thanks to my assistants and friends Agnes Newton and Nadine Petry and my reader-in-progress, Irene Clark.

Thanks to my daughter and fellow author, Carol Higgins Clark, for once again being my sounding board and keeping me from using expressions her generation just plain wouldn’t get.

Continuing gratitude to my cheering section, our children and grandchildren. As one of the kids asked, “Is writing a book like having a lot of homework, Mimi?”

A special loving thank you to my husband, John Conheeney, who continues to survive with great grace and humor being married to a writer on a deadline.

Once again I joyfully quote the fifteenth-century monk. “The book is finished. Let the writer play.”

P.S. To my friends—I’m available for dinner.

F
IFTEEN-YEAR-OLD
Nell MacDermott turned and began the swim back to shore. Her body tingled with youthful exhilaration as she looked about, taking in the glorious combination of the sun in the cloudless sky, the light, fresh breeze, the salty, foaming whitecaps breaking around her. She had been in Maui only an hour but already had decided that she liked it better than the Caribbean, which for the past several years was where her grandfather had taken the family for their annual post-Christmas vacation.

Actually, “family” seemed something of an exaggeration. This was the fourth year that their family had consisted of just her grandfather and herself. It had been five years ago when Cornelius MacDermott, legendary congressman from New York, had been called off the floor of the House of Representatives to be given the news that his son and daughter-in-law, both anthropologists on an expedition in the Brazilian jungle, had died in the crash of their small chartered plane.

He immediately had rushed to New York to pick up Nell at school. It was news that she had to hear from him. He arrived to find his granddaughter in the nurse’s office, weeping.

“When we were coming in from recess this morning, I suddenly felt that Dad and Mommy were with me, and that they had come to say good-bye to me,” she told him as he held her. “I didn’t actually see them, but I felt Mom kiss me, and then Dad ran his fingers through my hair.”

Later that day, Nell and the housekeeper who took care of her when her parents were away had moved into the brownstone on East Seventy-ninth Street, the place where her grandfather had been born, and where her father had been raised.

Nell flashed briefly on these memories as she began her swim back to shore and to her grandfather, who was sitting in a beach chair under an umbrella, having reluctantly acquiesced to her plea for one quick swim before they unpacked.

The Cross of Love by Barbara Cartland
Forbidden Blood: A House of Comarré Novella by Kristen Painter
Fortune Like the Moon by Alys Clare
Dogwood by Chris Fabry
Legend of Buddy Bush (9781439131824) by Moses, Shelia P.
Highlander Unchained by McCarty, Monica
Expecting the Boss’s Baby by Christine Rimmer
The Silence by Sarah Rayne
Love Alters Not by Patricia Veryan
What's Left of Me by Kat Zhang