Read Behind the Night Bazaar Online

Behind the Night Bazaar 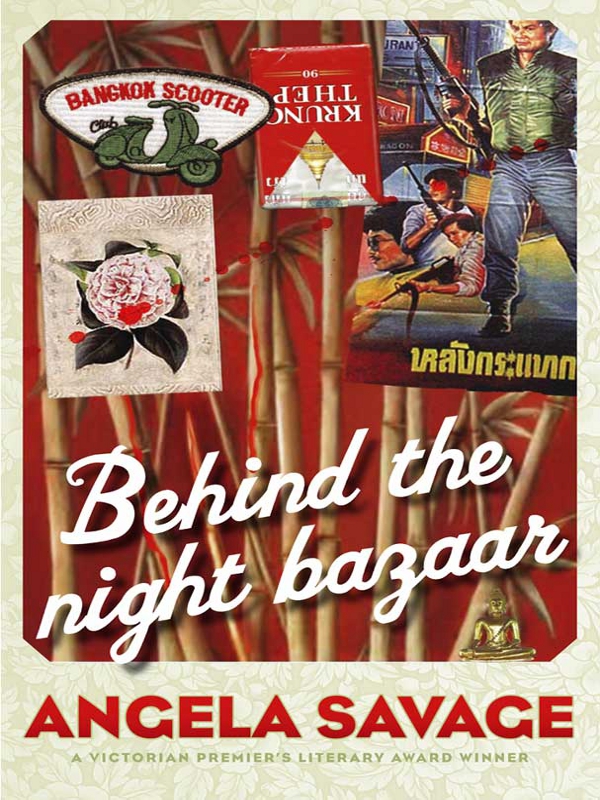 BEHIND THE NIGHT BAZAAR

In 1992 Angela Savage travelled to Laos on a six-month scholarship, then spent the next six years living in Asia. Based in Vientiane, Hanoi and finally Bangkok, she set up and headed the Australian Red Cross HIV/AIDS subregional program.
Behind the Night Bazaar
won the 2004 Victorian Premier’s Literary Award for unpublished manuscript. This debut novel launches a series featuring Jayne Keeney PI. Angela lives in Melbourne.

This project was assisted by the Commonwealth Government through the Australia Council, its art funding and advisory body.

All roads I travel lead home to you

T
he sluggish Bangkok traffic forced Jayne Keeney to slow to a crawl at Siam Square. To her right, a motorbike the same as hers carried a family of five: father driving, mother and two children in school uniform riding pillion, infant perched on the petrol tank up front. In front was a blue pickup truck, its tray full of plastic water bottles, a young man sprawled across the top of them, sound asleep despite the car horns.

Coming to a halt, Jayne placed her feet on the road either side of her bike, taking care to avoid a squashed rat in the gutter. It was late afternoon, the hot bitumen sticky beneath her sandals. She removed her helmet and shook the sweat from her long, dark curls. Reflected in the rear-view mirror, her pale skin had the rosy flush of someone emerging from a sauna, and she wiped smudges of mascara from beneath her amber eyes.

She smelled the garlands of jasmine an elderly woman was selling as temple offerings from a cart on the footpath. A tattered Happy New Year banner hung over the cart. It had been there long enough to cover several new years, from 1 January, the Chinese new year in February, and the mid-April festival of Thai new year the previous week. Beside the banner was a gaudy red and gold picture of a rat, the symbol for 1996.

On the facade of the department store behind the flower seller, a wall of televisions advertised skin-whitening cream. Opposite, a hand-painted billboard announced the release of another American action movie, while next door the evening’s special at the Dok Bua Restaurant was spicy fish-head soup.

Despite the atmospheric cocktail of high octane petrol, humidity and dust, Jayne felt invigorated. Not even the sight of a couple of Western backpackers kissing on a nearby corner could dampen her mood. The jaded charm and polite anonymity of the Asian metropolis suited her. Even the congestion on the roads worked in her favour: tailing someone was easy in a traffic jam.

Her target was a Thai woman whose American spouse suspected was having an affair with a colleague. The wife had told her husband she was flying to Udon on a business trip. But the taxi Jayne was following had bypassed the airport turn-off and headed into Bangkok’s city centre. Or one of them. The Thai capital was too much of an amorphous sprawl to be restricted to a single hub.

The traffic jerked forward and the sleeping man rolled over the water bottles undisturbed. Jayne replaced her helmet and joined her fellow commuters in honking at the backpackers. The Thais considered public displays of affection rude, though if Didier could see her, he’d say she was jealous. The lovers remained oblivious to the attention they attracted, love being not only blind but also deaf in this case.

She accelerated to gain on the taxi as it turned up Phayathai Road towards the Asia Hotel. The hotel’s lobby bar looked like a 1960s film set—dim booths and low-hanging lights—and Jayne had fond memories of seeing a Thai Elvis impersonators show there a few months back. As she inched her motorbike past the hotel onto a bridge, she caught a whiff of fetid
klong
, its contents the colour and consistency of sump oil. The canals were once the lifeblood of the city, where people drank, bathed, commuted and traded. These days the remaining klongs stank in the summer and flooded in the wet season, a reminder that Bangkok was built on a swamp and might easily become one again.

The taxi pulled over at the entrance to a
soi
, one of the numbered streets that branched off Bangkok’s main roads like tributaries from a river. Jayne parked and slung her helmet over the handlebars—headgear was so unpopular there was little risk of it being stolen. While the Thai woman paid her fare, Jayne waited by a fruit stall, rolling a rambutan around in the palm of her hand. The fruit’s egg-shape and hairy texture made her think of testicles—though it was a long time since she’d handled any of those. She put it aside as the woman emerged from the cab and paused to fold a piece of paper, probably a falsified receipt showing an airport drop-off. Jayne had seen it all before. In a city awash with sexual intrigue, spying on unfaithful lovers had been her bread and butter for over two years.

The woman adjusted a large tote bag over one shoulder and dragged a small case on wheels into the soi. The area was affluent but modest, low-rise apartments dotted among Thai homes with established gardens—the sort of place where Buddhist monks still begged for alms in the mornings and tailors made house calls. The woman headed towards a newer block of flats, a mishmash of architectural features including iron balconies, faux-marble pillars and a portico suitable for a Greek temple, complete with ornate caryatids.

Jayne ducked behind a large rubbish skip on an adjacent building site and opened her backpack. Her camera would record the time and date of the woman’s arrival and departure, which Jayne knew was the residence of the colleague under suspicion. This should give her client sufficient grounds to confront his wife, though whether she would fess up was another matter. In Jayne’s experience, circumstantial evidence was grounds for separation only if either party wanted out of the relationship. The need for proof was greater when there was more to lose.

It was a safe bet her subject would be spending the night. Jayne anticipated a stake-out and came equipped with water, a notebook and a novel. She didn’t bother carrying food, given the round-the-clock supply available from the street vendors. A local joke was if more than three people gather in the same place for upwards of two days, a food stall will appear. Indeed a group of women had set up a narrow strip of kitchen-cum-cafes on the footpath nearby. One of them, wearing a white chef’s hat and an apron advertising MSG, tossed noodles in a wok large enough to bathe a baby in. Another offered flattened half-chickens on bamboo skewers and catfish speared from mouth to tail, both grilled over hot coals and accompanied with plastic bags of pickled vegetables and whole chillies. The aroma of frying garlic and barbecued meat was enticing, but Jayne was too hot to eat.

She eyed the entrance to the apartment building where a security guard was dozing. It would make for a much more pleasant evening if she could conduct her surveillance inside. Although the sun was setting, the temperature rarely dropped below thirty at this time of the year. Jayne wiped her forehead, dirt and sweat coming away in greasy balls on her fingertips. The least she could do was suss out the possibilities.

Taking one of the caryatids by the waist like a dance partner, Jayne sidled around the statue-cum-column, slipped past the guard and entered the building through tinted glass doors. To the left was an unmanned reception desk, concealed from the entrance by a row of potted bamboo. On the opposite side of the foyer was a lift. A glance at the residents’ directory confirmed a match with the name supplied by her client.

Jayne checked out the view from behind the reception desk, the ideal height for her camera. The terracotta pots containing the bamboo were heavy, but the airconditioning gave her new energy. She dragged a pot around to the front of the desk, concealing her camera and ensuring the lens poked through the bamboo stalks. She checked the focus, activated the remote control and had just taken a test photo of herself, when she heard the lift rumble behind her.

The doors opened to reveal her client’s wife locked in a passionate embrace. Her lover’s face was obscured against the woman’s neck, his hand on her breast. They didn’t seem to notice that the lift had stopped. The woman’s eyes were closed. It was an opportunity too good to miss. Jayne pressed the remote control button and released the camera shutter.

The Thai woman’s eyes snapped open and the couple sprang apart. The woman pressed herself against the back of the lift, holding her tote bag against her chest like a shield. The man started shouting, an Australian accent. Jayne turned to the reception desk, relieved to see she hadn’t blocked the shot with her body. Through the glass doors, she saw the security guard had woken up, roused by the noise. She stepped quickly over to the reception desk to retrieve her camera.