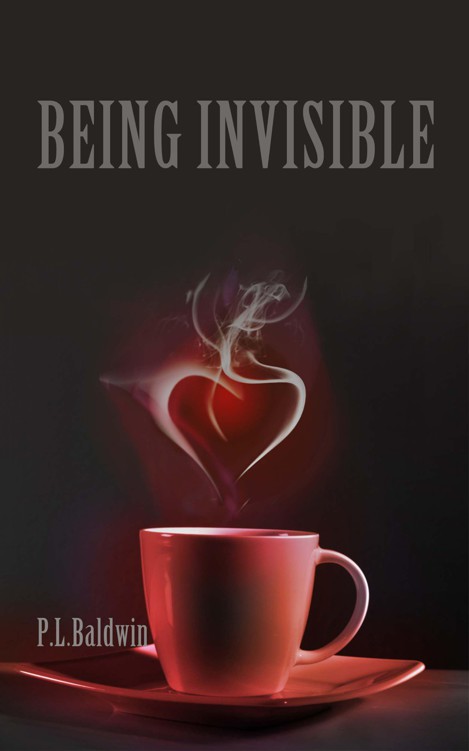 Being Invisible
By P.L. Baldwin

Music That
Sweeps Me off My Feet

4.
The “I Totally Planned This Party” Mix

6
. The We’ll Always Have Tacos Mix

9
. My Moving On Mix From the Eighties

14.
Music For the Games We Play

Songs For the Promises We Can’t Keep

21.
The One Hundred Dollar Mix

24
Songs That Make You Feel Better

Hope For the Hopeless Mix

The
Fear Itself Mix

My
“You Wouldn’t Like Me When I’m Angry” Mix

We’re
Here to Save the Day Mix

31
. The Happily Ever After Mix

32.
This Playlist is Dedicated to my
Superhero

Top Ten Reasons to Fall in Love With a
Superhero

Chapter One
The Far, Far Away Mix

My mind is racing, and I am having
a difficult time reining it in. Luckily, on the outside I am as cool as a
cucumber. My eyes are locked on his, showing that I am listening with vague
interest. My lips are curved into a smile just wide enough to appear
unaffected. My hands are clasped in front of me, and-shoot, I think they are
sweating...and if I am being completely honest, maybe shaking a little.

It’s just that it’s one of
those
moments. You know, that moment
when you are pretty sure that something big is about to happen, but you are
afraid to believe it’s true, just in case it’s not? Like, for example, when you
realize that your boyfriend might be, at this moment, going to propose.

I don’t want to get ahead of
myself though. There’s no guarantee that he is about to pop the question, just
because every single thing he is doing is making me think that he is.

Is it a coincidence that he has
taken me to the same coffee shop that we went to the first time we met? Back
then we agreed that it was some of the best coffee in the world, but only when
you’re drunk. Not to mention that not all of our memories of that place are
good. We kind of have an unspoken agreement to avoid this place.

“It’s nostalgic,” he had said when
I raised my eyebrows in question over his suggestion to “visit the old stomping
grounds and get some coffee at Insomnia.”

My curiosity increased when he came out
of the shower in a clean pair of khakis and a long sleeve button down shirt the
color of his eyes, which, by the way, he knows I love. His dark brown hair,
which he usually styles into a look that I like to call “casually disheveled,”
is slicked back in a way that’s usually reserved for bank interviews and school
pictures.

All of this was, at the most,
suspicious. But once we arrived at Insomnia, things took a major turn for the
unusual for Colin. Hence the betraying hands.

I was looking at the menu that
hung behind the counter, trying to decide on the extremely bitter coffee, or
the watered-down espresso when I heard Colin speak up.

“I will have a black coffee and a
blueberry muffin, and she…” he said, pulling me to his side, “will have a
vanilla latte with a cinnamon scone."

He ordered exactly what we did the
first time we met. Who is this guy, and what has he done with my Colin?

It wasn’t until we sat down at
“our” corner table that my brain went into hamster-wheel-on-crack territory.

“Bring back memories?” Colin asked
with a smile he reserves only for me.

I
managed to return his smile and add a nod. That’s about the most I could give
him.

“I know this isn’t the ideal date
for a Saturday evening, but I just... I just really wanted to remind you of
where we started, and how far we have come. We have been though a lot, Luce.”
Is he maybe, kind of...nervous?

“You know how we’ve always said
that great things really do happen when we least expect it, Luce?”

“Of course,“ I answered in a
totally cool and not at all freaked out voice.

“The day I met you, I had no idea
that my life was about to change. And I think it’s pretty safe to say that the
last thing you were expecting was to run into me.”

I laughed at the memory.

He was right. He never ceased to surprise
me.

“Meeting you made me believe in
fate. And being with you it has just…” He trailed off as if weighing his next
sentence.

So here I am, with watered- down
and now slightly cool vanilla latte in my mouth, afraid to move, breathe, or
swallow my drink, because I know Colin. And there is no way my Colin would be
this sentimental unless he has a really big reason- like he wants to profess
his undying love for me, and ask me to marry him. That, or he’s trying to find
a really gentle way to tell me that he accidentally killed my cat.

“Luce… Lucy, I love you. I know
you think that I don’t make time for you often enough, but you are more
important to me than anything else in the world. I wanted you to know
because...wait, sorry, my phone is buzzing. Hang on a sec.” He grabs his phone
from his pocket and answers.

“No, it’s OK. I’m with Lucy, but
if you need me... Yeah, I get it. As long as we can make it quick. I want to
get to back to the date with my girl.” With that sentence, he actually smiles
at me. Seriously. Like I should be stoked that he plans on
eventually
finishing the conversation that he is literally stopping
mid-sentence.

“Sure. I’m like ten minutes from
there. I’ll be there soon,” he ends the call, then glances at me, contemplating
the look of horror on my face.

“Are you kidding me? Are you
seriously freaking kidding me, Colin?”

The same hands that were shaking just a few minutes ago are now about to
wring his neck.

“Oh shit, Luce. I'm
sorry. I know I promised a special night. We’re going to finish it. I promise.
I wouldn’t have agreed to go if it wasn’t important. The police have been
working on taking these guys down for months. It could end tonight. I could
help end it. I have to go.”

I don’t even know what to say at this
point. On one hand, it seems like he feels genuinely sorry for leaving me, and
based on his look, slightly worried that I might hit him. I know that he feels
this incessant need to help bring justice to the world, so it’s hard to see him
so torn.

On the other hand, I kinda want to
wipe the worried look off his face by throwing what’s left of my scone at him, and
then follow it up by dumping my latte in his lap. And maybe kick him. Because
the scone probably won't hurt him enough to make me feel better. Both options
sound tempting.

“I promise that I will make it up
to you, Lucy. When this is over, you and I are taking a few days off. We can
take a trip, go somewhere fun. Or, we can stay home, and curl up in my
apartment all weekend. Watch movies, order in, maybe even..." He grabs my hand
and rubs it lightly, while giving me his most hopeful expression. He is really
laying it on thick.

”You mean?" I’m still pissed,
but my interest is peaked. He does know the way to my heart.

“You know what I’m talking about,” he
teases, leaning in close to me to lower his voice.

“Scrabble?” I ask, trying not to get too
excited.

I’m not doing a good job
of portraying my deep-seated anger. But damn it, Scrabble is my kryptonite, and
he knows this.

“Fine, Colin. But you owe me. Seriously think about
what it’s going to be like playing Scrabble for four days straight, because
that’s what it’s going to take.” I am giving him my super serious look, because
he needs to know that I am
super
serious.

“Babe, I am so going to make it up
to you. I might even play...” he pauses for dramatic effect, then finishes in a
whisper, “Clue.”

OK, now he’s just not playing
fair. He banned me from ever playing Clue again after the “lead pipe pirate incident.”

“I’ll be so quick you’ll want me
to change my name to Flash,” he says while leaning in for a kiss. “I will call
you soon.” With that, he’s gone.

The door closes behind him, and I
let out a breath that I didn’t even realize I have been holding.

So I guess it’s going to be one of
those
moments. You know, that moment
when you are pretty sure that your boyfriend is about to propose, but then
suddenly needs to leave to help the police? Because he is, after all, the only one
who can become invisible and save the world.

That's probably just me-the problems
only I can understand because I am in love with a superhero.

That’s right. A superhero. And he
is as amazing as you would think. Always willing to help at the drop of a hat.
Kind to everyone-people and animals alike. Strong, quick and courageous. And if
you ever meet a superhero, and you think you might fall in love, my suggestion
would be to run far, far away.

The White Mountains (The Tripods) by Christopher, John
Bradley Wiggins: My Time by Wiggins, Bradley
Lucky's Lady (The Caversham Chronicles Book 4) by Raven, Sandy
Land of the Dead by Thomas Harlan
Just This Once by K.G. MacGregor
Kingdoms Away 1: Jorian Cluster Archives by S. V. Brown
Sins of the Flesh (Half-Breed Series Book 2) by Debra Dunbar
The True Love Quilting Club by Lori Wilde
The Truth About James (Y.A Series Book 2) by Sarah Tork
The Invisible Ring by Anne Bishop