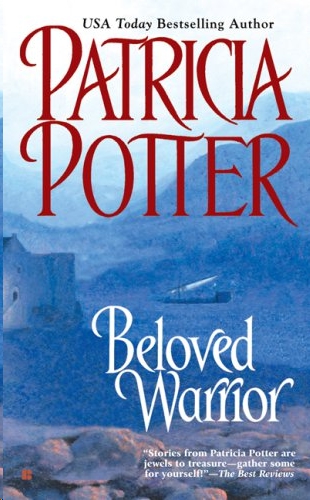 Beloved Impostor
“Ms. Potter has given us another thrilling drama. Every page proves the reason for her award-winning success . . .
Beloved Impostor
travels at a fast pace with outstanding characters and an expertly developed plot.”—
Rendezvous
“A wonderful Scottish tale wrought with emotion, tender in its telling and heart-wrenching in its beauty. Ms. Potter captures our hearts and gifts us with another beautiful story.”—
The Best Reviews
“[A] superb romance . . . It’s Potter’s unique gift for creating unforgettable characters and delving into the deepest parts of their hearts that endears her to readers. This is another masterpiece from a writer who always delivers what romance readers want: a love story to always remember.”
—
Romantic Times
“The story was riveting, the execution and the telling of it and the characters involved showed spirit, courage, chemistry and mostly they had a heart and held on to hope. It held my interest and kept it.”—
Pink Heart Reviews
“Ms. Potter is a very talented storyteller, taking a much-used theme—lovers from warring families—and manipulating it, adding plenty of new ideas and twists, until the end result is the original, highly satisfying
Beloved Impostor
. . . Ms. Potter very adeptly whetted this reader’s appetite for more about these two Maclean brothers, but for now, there is
Beloved Impostor
, which I highly recommend.”
—
Romance Reviews Today

Dancing with a Rogue
“Once again, Potter . . . proves that she’s adept at penning both enthralling historicals and captivating contemporary novels.”—
Booklist
(starred review)
“Gabriel and Merry are a delightful pair . . . Patricia Potter has provided a character-driven story that her audience will enjoy.”—
Midwest Book Review
“An entirely engrossing novel by this talented and versatile author.”—
Romance Reviews Today
“Interesting and fresh.”—
Affaire de Coeur

The Diamond King
“The story line is loaded with action yet enables the audience to understand what drives both lead characters and several key secondary players . . . a robust romantic adventure ... [a] powerful tale.”—
BookBrowser
The Heart Queen
“This is a book that is difficult to put down for any reason. Simply enjoy.”—
Rendezvous
“Exciting ... powerful ... charming ... [a] pleasant page-turner.” —
Midwest Book Review
“Potter is a very talented author . . . If you are craving excitement, danger and a hero to die for, you won’t want to miss this one.”—
All About Romance

Acknowledgment
With many, many thanks to Vickie Mazzola for her tireless efforts, encouragement and friendship.
Chapter 1
Spain, 1514
“Wed? To a man I do not know?”
Juliana Mendoza couldn’t keep the horror from her voice as she faced her father.
“You have always said you wish to see England,” her father reasoned.
“To visit. My home is in Spain.”
She glanced at her mother, who stood beside her husband. Juliana had never seen her look so sad, so defeated. She had known for years her parents’ marriage had not been a happy one, but this was different. She saw a new kind of fear in her mother’s eyes.
“Madre?”
Juliana pleaded. “No . . .”
Her mother looked away, avoiding her eyes.
“According to your uncle, he is young and well-favored,” her father said. “It will be a good marriage for you. Far better than I expected. Like your mother, you are too fair for Spanish tastes. But the Earl of Chadwick sees political advantages in this union with his son, Viscount Kingsley, and it will be beneficial to our shipping trade.”
She winced at the statement. It was not the first time that her father had disparaged her mother’s blond hair and her own, which was more the shade of honey. After her mother failed to produce a male heir, he had become more and more brutal and insulting. She feared for her mother, which was one reason she did not want to leave Spain.
Nor did she wish to be trapped in a marriage like her mother’s own arranged union. “Can he not come to Spain?” she said desperately. “He may not favor me.”
“He has already agreed,” her father said. “Our families have planned this alliance for years.”
“But with his brother,” her mother intervened in a soft voice.
She received an angry stare from her husband. “His brother is dead,” he said. “Chadwick does not want to risk another son here in Spain. Juliana is to be delivered to their property in northern England for the betrothal announcement. The marriage will be in London several months later.”
Juliana had known her father expected a match with the influential Earl of Chadwick’s family. Not only was her mother a distant cousin of the earl, the two families had extensive financial and shipping relationships.
Juliana had hoped that the death of the earl’s oldest heir would end the prospect of marriage with a man she didn’t know in a country far from all she knew and loved. Foolish wish, indeed, but she had seen the horror of an arranged marriage. Her beautiful mother had faded into a timid shadow.
“Both King Henry and King Ferdinand favor the match,” her father continued. “They want to strengthen ties between our countries. The French still plot with Scotland.”
Juliana did not care what the kings wanted.
She did not want to leave her mother. She did wish to wed, but she desperately wanted someone of her own choice. She adored children and wanted some of her own, but she wanted a happy place for them to grow. Not a place of fear.
Now she had no choice. Her only purpose in life, apparently, was to enrich her father . . . to tie Spain to England . . . to be a dutiful daughter and do as she was told.
“Can
Madre
go with me?” she pled.
“No,” her father said sharply. “She stays here. Go now. You have much to do. You will sail in two weeks. I have sent for dressmakers. You must be presentable. I would not want you to shame this family.”
She hesitated, wanting to protest again, but she saw her mother shake her head and she held her tongue. She met her father’s gaze directly, then lifted her chin with as much dignity as she could summon and turned toward the door.
Juliana softly pulled the door closed behind her but did not shut it completely. She lingered, knowing her father would have further words with her mother.
“Do not do it,” her mother said, and a chill went through Juliana. She knew the courage it took for her mother to oppose her father. “Garrett was a good match. A gentleman. But Harry . . . I knew him when he was a boy. He was vicious. A bully.”
“Do you believe I care? You are talking about the next Earl of Chadwick, heir to a vast shipping fortune,” Luis Mendoza said. “Juliana is a fortunate girl.”
“His brother, Garrett, should have been earl. And Juliana’s husband.”
“Garrett is dead. The match has much to offer us. Chadwick has markets closed to us, and we are heavily indebted. We need those markets, and we need trade with England. If I snub Chadwick, we will lose that trade.” He paused. “And we need Ferdinand’s continued favor. He fears an alliance between France and England. He wants his sister, King Henry’s wife, to have a friend at court.”
“Please,” her mother begged with a persistence that was rare. The chill Juliana felt spread throughout her. Her mother rarely disagreed with her husband, and when she did, the consequences were harsh.