Read Beneath a Blood Moon Online

Beneath a Blood Moon 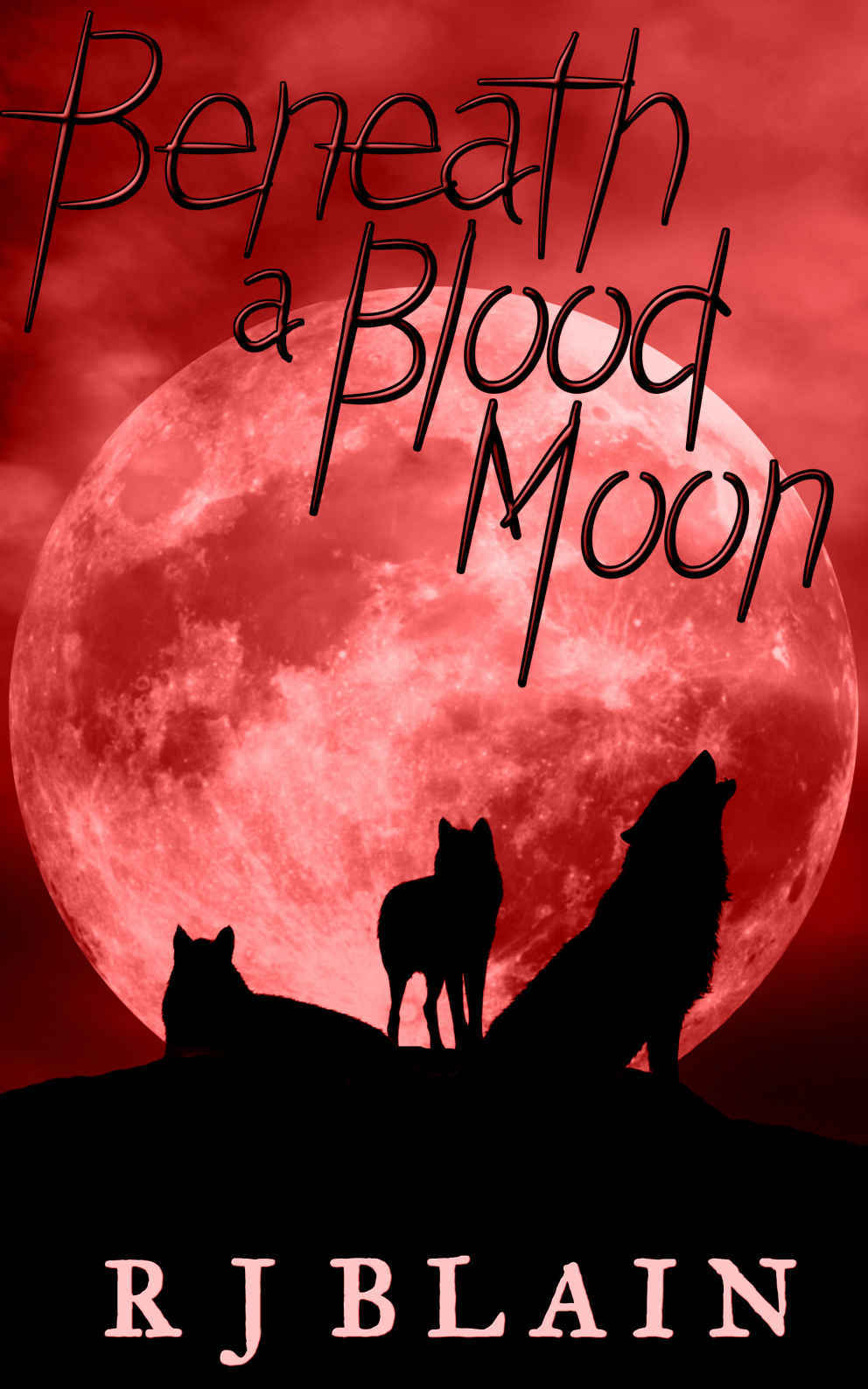 Beneath a Blood Moon

A Standalone Novel Set in the Witch & Wolf World

All rights reserved. This book or any portion thereof
may not be reproduced or used in any manner whatsoever
without the express written permission of the publisher or author
excluding the use of brief quotations in a book review.

For more information or to contact the author, please visit
rjblain.com
.

A funerary urn filled with black roses waited for me on my doorstep.

Black lacquer gleamed in the early morning light; it was covered with gold and silver etchings depicting the heavens and its angels in triumphant exaltation as they welcomed the dead home. The cap rested beside the urn. If I wanted to enter my apartment, I had to either move it or step over it.

The roses unsettled me even more than the urn; they still had their thorns, and they were stained with crimson.

The paint—if it was paint—glistened in the early morning light.

Shivering, I spun around. The street outside my apartment building was quiet. Few people ventured out in my neighborhood so close to dawn; while the area wasn’t particularly violent, it was filled with people just like me who could barely afford living in Las Vegas.

We were in need of money, but we weren’t desperate enough to kill for it, not yet at least.

A girl living alone in the poor side of town, however, could never be too careful. Judging from my doorstep, I was right to worry. Swallowing, I pulled my keys out of my purse. My hands shook so hard it took me several tries to unlock the deadbolt. I pocketed my keys, taking a long look inside.

My living room was as I left it, a mess of dirty laundry and text books. Staring down at the urn, I drew a deep breath to steady my nerves and stooped down to pick up the unwanted delivery.

The last thing I needed was a nosy neighbor discovering such a thing outside of my apartment. They’d either tell me I deserved it for being a stripper or report it to the police, who would come asking questions I couldn’t answer honestly.

At least I had kept my first name the same when I had run away from home; when I introduced myself as Sara, I didn’t feel like I was living a lie. It was bad enough my colleagues all called me Jasmine, both as a mockery of my prudish, conservative behavior and a nod to my looks, which kept me employed at several different clubs and casinos.

When they thought I couldn’t hear them, they liked muttering about how I was a pampered princess who didn’t belong among them.

I sighed, set the urn on my coffee table, and stared at the phone, wondering if my fake ID would withstand the scrutiny of the police. I barely looked eighteen let alone the twenty-four my license proclaimed me to be. Did they arrest strippers who lied about their age?

I contemplated the urn and its roses. Was prison a better alternative to having the attention of someone willing to leave such a macabre gift in front of my door? I stared at my phone, once again considering whether or not to call the cops.

Anyone disturbed enough to leave such a thing on someone’s doorstep was someone to worry about.

The roses unsettled me most of all. How could something so beautiful unsettle me so much? A splash of cream among the green leaves and thorny stems drew my eye. Biting my lip, I gingerly pushed aside the roses, careful to avoid pricking myself on them.

My first name was written on the envelope in gold ink and flowing calligraphy. Taking hold of the corner, I pulled it free of the thorns. Splatters of red marked the creamy paper. In a few places, the stains had darkened to the brown-red of dried blood.

A blob of red wax held the envelope closed. I contemplated throwing the whole thing away without reading it, but my morbid curiosity got the better of me.

Who had sent the urn and the roses, and how did they know my name?

I broke the seal and opened the envelope. Within was a card. The edges were decorated with black roses tangled in silver and gold ribbons. The two lines of text neatly printed in the center chilled me to the bone.

This urn for the dead, I made just for you.

The card slipped from my numb hands to flutter to the coffee table. A single drop of blood splashed down from the roses to splash onto the paper as though warning me of what would come.

I forced myself to go to class, trekking across Las Vegas to one of the few community colleges accepting part-time students ineligible for financial aid or unwilling to apply for it. The entire way, I kept my eyes fixed to the ground, pretending nothing was wrong so I wouldn’t glance over my shoulder every other minute.

Class went by in a blur, and while I tried to take notes, I remembered little of the professor’s lecture. It had something to do with cornering new segments of the market for small businesses. I’d regret my inability to concentrate later, of that I was certain. I left wondering why I had gone at all. Frustrated over how frazzled the note, the urn, and the roses left me, I headed home.

My doorstep was devoid of unwanted gifts, and breathing a relieved sigh, I let myself in. Everything was as I left it, including the urn. In a way, I wished it were gone, vanished into thin air as though it had never existed in the first place. It would have been easier to live with the worry of suffering hallucinations than the reality of a stalker—or worse.

Once again, I considered calling the police. If I did, I’d have to show them my license. When they found out I was a stripper, they’d blame me. After all, I made a living teasing men.

The police would make assumptions—likely accurate ones—about who might target me. How long would it take them to stop caring about who had sent the flowers and focus on my behavior instead? I clenched my teeth.

It happened all too often to the other girls working the clubs. When they were raped, it was considered a risk of the business. When a girl was stalked, raped, or worse, too many believed she was at fault for putting her body on sale in the first place.

I would be no different.

Sighing my resignation, I abandoned the idea as a lost cause. Even if I went to the police, what could they do? They’d probably tell me to stay home and avoid going anywhere alone. It would be good advice, but advice I couldn’t follow even if I wanted to.

I had no one, not really.

Three years living in Las Vegas hadn’t changed my solitary tendencies. I knew people, and some of them I even knew by their real names. Isabella came to mind; at the clubs, she went by the name of Slink, which perfectly described her relationship with the pole. She had rubber for bones, and no matter how hard I tried, I couldn’t match her when I danced. I took comfort in the fact there were few who could, which made losing tips to her a little easier to swallow.

Sighing, I checked my calendar for my work schedule, wrinkling my nose at the back-to-back shift. In the early evening, I’d work my primary club. Afterwards, I’d hike down Las Vegas Boulevard to dance a gig as a showgirl. With luck, I’d pick up a few extra bucks on the way from tourists wanting to have their picture taken with me.

Tourists liked my blonde and blue hair; it made me stand out in a city full of women wearing bikinis decorated with sequins and feathers.

Once I finished dancing as a showgirl, I’d return to the club and strip until the boss kicked me out or I lacked the strength to stand. With my luck, it’d be the former. If I lucked out and the latter happened, I’d have enough money to pay my bills plus fit in a trip to the grocery store. Determined to have more than nickels and dimes in my bank account, I packed my best costumes and braved the streets.

After an hour of carrying a costume bag on the bus, I wished I could afford to live closer to the strip. I stared up at the neon lights of the club, sighed, and headed for the back employee entrance. In a way, I was relieved I was the only regular on shift; the new girls either ignored me or scorned me as competition, and I wasn’t beholden to any of them to teach them how to stoke a man or woman’s interest.

It gave me time to think, which was as much of a blessing as it was a curse. Who would send me a funeral urn? Why? I had been careful about avoiding any situation that forced me to reject men. The few times I had worked nights as a prostitute, I had done so out of desperation.

Even then, I had been cautious about who I slept with, careful to choose men who wouldn’t linger in the city. They considered me a conquest and nothing more. I hated it almost as much as I hated the daily grind of stripping, using my love of dance and perverting it for the pleasure of men and women alike.

I browsed through the racks of extra costumes, sighing my resignation.

Who would send me an urn? Why?

Had a Vegas local done it? I shivered, and despite knowing I shouldn’t, I again considered whether or not to call the police. If they checked my license, the lie of my life would be exposed.