Read Beneath The Surface Online 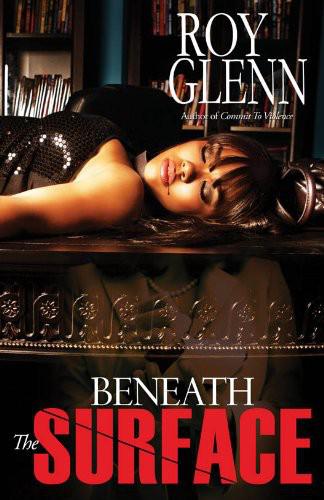 Beneath the Surface
Roy Glenn

This is a work of fiction. Any references or similarities to actual events, real people, living or dead, or to real locals are intended to give the novel a sense of reality. Any similarity in other names, characters, places, and incidents is entirely coincidental.

Mack Ashford and Floyd Summers rolled slowly down a street in Jacksonville Beach, Florida, and parked the car in front of a house. “What now?” Mack asked.

“We wait,” Floyd said and checked his weapon.

Mack turned around and got the pump out of the backseat and loaded it. “This better turn out to be something. And I ain’t talkin’ ’bout
no
couple of grand. There better be some real fuckin’ money in this bitch.”

“
Relax,
nigga. Kiexiza said this nigga got a safe in his office and she saw stacks of paper in there.”

“Safe? Nigga, you ain’t say nothin’ ’bout
no
damn safe. How the fuck we gettin’ in?”

Floyd reached in his shirt pocket and pulled out a piece of paper. “I got the combination.”

Mack took out a gun and put the barrel in Floyd’s eye. “It better not be wrong. Not after we done drove all the way down here from Atlanta. I better go back with something or I guarantee you, I’ll be drivin’ back alone.”

“
Relax,
nigga. Like I said, Kiexiza told me this nigga got paper in there.”

Mack eased his gun away from Floyd’s eye. “Come on, let’s go.”

Inside the house, Leon Copeland got in bed as he did every night with Diamond and Pearl. He met them both ten years ago at a strip club when he first got to Jacksonville. The tittie twins, as Nina Thomas became fond of calling them, were doing an act together and caught his eye. They left the club together that night and have been together since.

Leon had come to Jacksonville from New York after his good friend Mike Black went to war with André Harmon. Those days, they both worked for André. Leon sold drugs while Black was his enforcer.

When Vickie Payne died in Black’s apartment, smoking uncut cocaine, it caused his attitude to change. He began to see cocaine as death and heroin as slow death. He became totally opposed to selling death to his own people. When André met his untimely demise at Black’s hands, he took over and moved quickly to get out of the drug business.

With André dead, Black set up a meeting where he announced that he was getting out of the drug business, and that he wouldn’t let anyone sell in his neighborhood. That started at a war between Black and what was left of André’s organization. With Black killing everybody who sold drugs, Leon made the decision not to take Black on like everybody else, and to move his program to Jacksonville, with Black’s blessing and support.

Mack and Floyd stood outside of the front door and looked at each other. Then Floyd set himself, kicked in the door, and rushed inside. In the bedroom, Pearl heard the noise and got out of bed.

As Mack and Floyd moved through the house, two of Leon’s men came into the living room. Mack raised the pump and fired; he hit one of Leon’s men in the chest. The other man fired back, but then he was hit by a shot to the head from Floyd.

Hearing the shooting, Leon and Diamond got out of bed while Pearl grabbed her forty-five, and rushed out of the room.

Pearl ran down the hallway and could see the two men lying dead on the floor, and Mack and Floyd moving toward the office. Pearl opened fire and they hit the floor by the couch.

Back in the bedroom, Leon and Diamond had armed themselves. Pearl emptied her clip and turned to head back in the bedroom. While Leon went to the office to protect his money, Diamond came out of the bedroom carrying a Mac-10 and threw Pearl a gun.

Pearl caught the gun, spun around, and fired wildly at Mack and Floyd. They fired back at Pearl and hit her with two shots to the chest as Diamond looked on.

“Mutha fucka!” Diamond yelled and opened fire as tears rolled down her cheeks.

Leon came out of the office with a briefcase in one hand, and an AK in the other. When he saw Pearl lying on the floor, he began spraying the room as Mack and Floyd took cover. When Diamond’s weapon was empty, Leon tossed her his gun and she kept firing. He checked Pearl’s pulse and she was still alive.

Leon threw the briefcase toward the back door as Diamond began to move in that direction. He grabbed Pearl by the hand, lifted her up, and threw her over his shoulder. Leon reached for the 45mm in his waist and fired as he made his way to the back door. Once Leon was out, Diamond picked up the briefcase and turned to run. When she turned, Diamond caught one in the back, but was still able to make it to the car. Once they made it to the car and got in, Leon drove off.

Leon had driven for a while thinking about Pearl being shot in the backseat, when he turned to Diamond. “You all right?” But Diamond didn’t answer. “Diamond,” he said and shook her. That’s when he saw the blood. “Hold on, Diamond—please. I can’t lose both of you,” Leon said to her.

He drove as fast as he could to the nearest hospital. When they arrived, Leon ran inside. “I need help outside!”

A nurse approached him. “What’s wrong?”

“Two people have been shot!” Leon yelled and led the nurse to the car, along with a team with stretchers.

She checked both Diamond and Pearl. “I have code blues,” she said, indicating that the patients required immediate resuscitation.

Leon looked on with a heavy heart as they took Diamond and Pearl out of the car, and wheeled them inside. As soon as they were in and he was confident that they would be taken care of, Leon got back in the car and drove away.

Carmen Taylor prepared to go on the air with her story about the opening of an art exhibit at a local gallery. They had already shot the footage of the exhibition. All that was left was for Carmen to do her on-camera work and call it a night.

Carmen, along with her producer and cameraman, stood outside of the gallery on 18
th
Street. They wanted to shoot the intro and closing of the piece from there.

“There’s a new voice in the world of art. And you know what? It’s right here in Manhattan,” Carmen said over the sound of police sirens.

However, the car didn’t pass. It stopped right in front of the gallery. Max, Carmen’s cameraman, immediately raised his camera and began shooting as two uniformed officers exited their unit and quickly rushed inside.

“Something’s going on in there,” Dan said and started for the door, and Max rushed off behind him.

When a second cruiser pulled up at the gallery, two more uniforms jumped out and headed for the door.

“Sorry sir. I can’t let you in there,” the uniform said when Dan tried to get back inside.

“Can you tell me what’s going on inside, officer?” Dan asked as Max raised his camera.

“There’s been an incident inside, sir. That’s all I can say. Now I need for you to step back, please,” the officer instructed, and he and his partner began to establish a perimeter.

“What’s goin’ on?” Carmen asked when Dan and Max joined her at the news van.

“He said there’s been an incident,” Max said, sarcastically mocking the officer. “No shit.”

Once the officers had established their perimeter, Carmen looked at her crew. “I’ll find out what’s goin’ on in there,” she said and approached one of the officers.

“I bet he won’t tell her anything either,” Dan said.

Max glanced at the young, black officer and how he was staring at Carmen as she approached him. “Ten bucks says he tells her everything he knows and proposes marriage,” he said and laughed.

“You’re on. Get some shots of her talking to him.”

“Yes ma’am,” he said and glanced at Carmen’s press credentials.

“Pleasure to meet you,” Cedric said with a smile.

“Can you tell me what’s going on inside?”

“Off the record,” Carmen pleaded.

Cedric looked around and leaned forward. “Off the record, a woman was found dead inside. That’s all I know.”

Just then, another car arrived at the scene and two more men got out and crossed the police perimeter. “Detectives,” Cedric said as Detective Jack Harmon and his partner, Diane Mitchell went inside.

Moose Murdered: How I Learned to Stop Worrying and Love My Broadway Bomb by Bicknell, Arthur
Spearfield's Daughter by Jon Cleary
Down to the Bone by Thirteen
Winchester Undead (Book 2): Winchester: Prey by Lund, Dave
The Killables by Gemma Malley
Thirty-Two and a Half Complications by Denise Grover Swank
No Regrets (No Regrets #1) by Heather Allen
Banishment (Daughters of Mannerling 1) by M. C. Beaton
Just J by Colin Frizzell
Children of the Blood by Michelle Sagara West