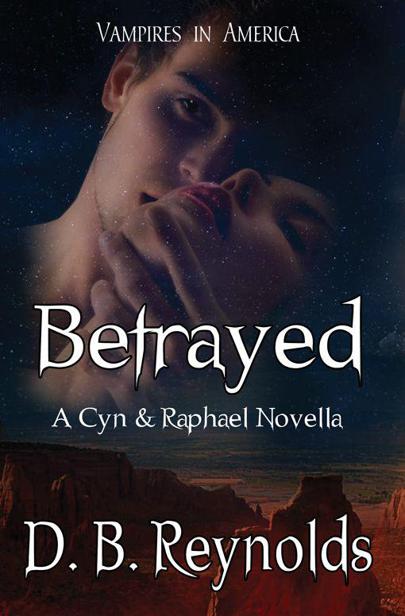 This one’s for all of my readers who asked for more of Raphael and Cyn.

First thanks as always to my wonderful publisher and editor, Linda Kichline at ImaJinn Books, who works so hard to make these books happen.
And to Patricia Lazarus for putting up with my emails and “suggestions” on the covers.
To my generous and talented writing partners…
Michelle Muto and Steve McHugh.
Be sure and check out
their
books on Amazon, too! To John
Gorski
for once again talking guns and ammo with me, and for sending me gory pictures!
To my family for their ever strong and loyal support.
And to my husband who lets me sleep late … sometimes. I couldn’t do this without any of you.

Other Books by D. B. Reynolds

Betrayed:
A Cyn
& Raphael Novella Copyright 2012 by Donna Beltz. All rights reserved under International and Pan-American Copyright Conventions. By payment of the required fees, you have been granted the non-exclusive, non-transferable right to access and read the text of this e-book on screen. No part of this text may be reproduced, transmitted, down-loaded, decompiled, reverse engineered, or stored in or introduced into any information storage and retrieval system, in any form or by any means, whether electronic or mechanical, now known or hereinafter invented, without the express permission of ImaJinn Books, Inc.

Cynthia Leighton stepped out onto the private deck, feeling the velvet brush of cool, dry air over her skin. That first touch of the high desert always felt good, sensuous almost. But after a few hours, she knew she’d be longing for the damp
California
coast, every inch of her body feeling parched and shriveled. She smiled at the thought and slid the heavy glass door shut behind her.

The house they were staying in, one of Raphael’s many
properties,
was a marvel of modern architecture perched high on a rocky mesa. From the front of the property, one enjoyed unparalleled views of a swanky golf course. A lush swath of green, it was close enough that the vampires benefited from the view, but far enough away that they were in no danger of anyone’s curious eyes or stray fairway shot colliding with the windows. But that was the other side of the house. The view from where she stood was very different.

She dropped her towel and robe onto a chaise lounge and stepped to the edge of a pool which filled most of the deck space. Steam rose from water that glittered turquoise blue in the otherwise dark night. Beyond the pool’s infinity edge was the barren sprawl of Grand Valley, nothing but dry desert and rocky hillsides as far as she could see, broken only by the occasional twinkle of someone else’s house lights in the far distance.

Cyn stared down into blue water that seemed to stretch all the way to the horizon. There was a second pool at the other end of the house, but this one was right off the master suite and reserved for Raphael and
Cyn’s
private use. She dove in, the warm water closing over her head, soaking into her pores and letting her forget for a moment that they were far away from the wet ocean air of home. She surfaced and began stroking through the water, quickly settling into a rhythm.

Most people thought of mountains and snow when they thought of
Colorado
. So did Cyn. Raphael had a house in
Boulder
and a smaller one in Vail, too. Both of those places typically saw some serious snow action in winter. But not so much here in
Grand Junction
’s high desert. There were plenty of mountains, and it did get cold, but snow wasn’t all that common, just a few inches a year.

She moved smoothly through the water, swimming parallel to the infinity edge, back and forth, until her muscles went beyond warm and into the burn.

Over the muted sound of her own swimming, she heard the soft rumble of the sliding glass door opening. She shot a quick glance in that direction as she made her turn and saw Raphael standing in the doorway.

He smiled, but before he could say anything, a phone rang, and the next time she looked over, he’d gone back inside to answer it.

Cyn figured it must be more super-secret vampire stuff if he didn’t want to have the conversation outside, even on this private and reasonably isolated deck. Of course, sound carried in the thin air of the high desert.

Cyn finished her last lap and boosted herself up and out of the pool. The air was much colder now that she was wet all over, despite the pool’s warm temperature, or maybe because of it. She hurried over to the chair near the door where she’d left her things, glancing inside as she pulled on her robe. Raphael was still on the phone, but he looked up and met her gaze, holding up one finger to indicate he’d be off shortly.

Cyn shrugged and picked up a towel for her wet hair. A violent shiver rippled down her body, and she’d just decided it was time for a hot shower and some warmer clothes, when the door opened and Raphael stepped outside.

“How was your swim,
lubimaya
?”
He took the towel from her and began gently drying her hair.

“Good,” she said, leaning back against his chest. “I was just about to take a—”

She heard the crack of a rifle shot and twisted to shove Raphael to the ground, but he was already dragging her down with him, his arms wrapped around her as they hit the wooden deck. Two seconds later,
Juro
was there, throwing himself in front of Raphael and Cyn as a second shot shattered the high desert’s peace.

The shot was still echoing when Cyn shoved at Raphael from within the cocoon of his arms. “Inside,” she hissed. “You’ve got to get inside.”

“Inside,”
Juro
rumbled at almost the same time. “Before he manages a third shot.”

Raphael tightened his hold on Cyn.
“On my command,
Juro
.
We move together.”

Juro
nodded silently, his eyes gleaming dark yellow as he searched the charcoal blackness beyond the pool’s edge, trying to do the impossible and locate the shooter.

He was up and moving while
Cyn’s
muscles were still coiling in response to the command. All but carrying her, using his vampire-gifted speed, he raced into the house, with
Juro
a small mountain behind them, guarding his master’s back with his body and life.

Once inside, they moved immediately away from the windows. The glass was bullet-proof, but not even bullet-proof glass could repel every type of bullet these days. And none of them wanted to linger to close the door. Instead, they hurried straight across the dark outer room of the suite and ducked into the conference room, which had no windows and a full communications console.

Juro
was already on his cell phone as they entered the conference room, snapping out orders. Cyn could hear vampires racing down the halls, heard the roar of SUV engines as teams of security people fanned out to search for the shooter, even though she knew he’d be long gone by the time they got there. And that was assuming they could find his hide. Those shots could have come from anywhere in the valley, as far away as two miles if the shooter was skilled enough.
Hard enough to locate in daylight, almost impossible at night, and with nothing to go on.

Raphael hustled Cyn over to a seat against the wall and then turned to
Juro
. “How badly are you injured?” he asked his security chief.

“Only the arm, my lord.
It will be healed by tomorrow night.”

“You’re shot?” Cyn surged to her feet and rushed over to where
Juro
stood near the conference room door. She reached for his bleeding arm, but he caught her hand.

“It’s nothing, Cynthia,” he said, his bass voice unusually gentle. “It will heal. You need to stay inside.”

Cyn pursed her lips in disgust. Combine stupid male pride with vampire arrogance, and he could be bleeding to death and never admit it. He wasn’t even using his left arm; couldn’t, more likely. It was hanging limply at his
side,
his white shirt sleeve ripped to shreds and soaked red with blood. And if the missing chunk of flesh in his bicep was any indication, the bullet had probably smashed through bone on its way through the arm. A regular human would be in shock from loss of blood, if not the pain.

Cyn frowned, wondering if Raphael was going to offer his blood to help heal the wound. It was curious that he hadn’t already, unless . . . She spun around and found Raphael at the far end of the room, speaking to someone on a cell phone. She stormed over and began examining every inch of him, ignoring his scowl at the interruption. Fuck his damn phone conversation. She needed to know if he was going all John Wayne on her, if he was injured and not telling her, just like
Juro
.

Raphael threw the phone aside suddenly and grabbed her arms as she reached for him. He pulled her close. “I was not shot, my Cyn,” he murmured against her ear. “I would tell you—”

“No, you wouldn’t,” she protested immediately, fighting to break his hold on her, pushing uselessly at his chest. She felt tears choking her throat and let her head fall forward. Raphael’s hand stroked down over her wet hair.

“You’re cold.” He pulled her robe more closely around her and tied the belt, before pulling her into his arms again. “I
would
tell you, my Cyn,” he repeated. “I promise.”

She looked up at that, meeting his gaze. Raphael was a consummate liar when he wanted to be. But when he made a promise, he kept it. She swallowed the tears and put her hand against his chiseled cheek. She didn’t say anything, just held her fingers there for a moment,
then
nodded.

“You have to let me help find out who did this,” she said.