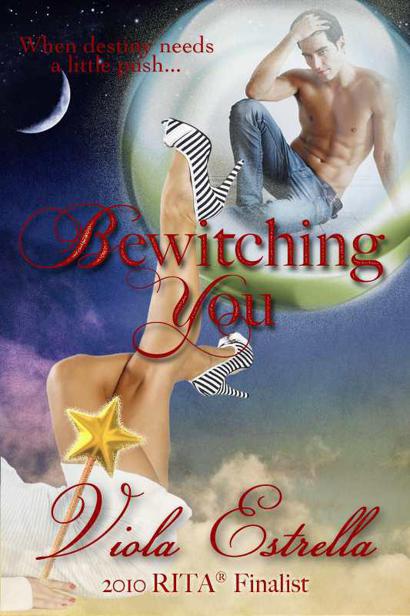 More information about Viola Estrella can be found at her website

This eBook is licensed for your personal enjoyment only. This eBook may not be resold or given away to other people. If you would like to share this book with another person, please purchase an additional copy for each recipient. Thank you for respecting the hard work of this author.

Bewitching You
is a work of fiction. Names, characters, places and incidents are all created by the author and bear no connection or resemblance to actual events, persons, living or dead.

Disclaimer: BEWITCHING YOU was originally published in 2009. This second edition has been thoroughly revised and reedited.

Praise for
Bewitching You

“This was a fast paced story that keeps the readers attention from start to finish. Viola Estrella writes a wonderful tale of true love. This is a story full of spice and adventure with a bit if humor thrown in. The bond that Sofia and Grayson have is a wonderful thing. Showing us just how wonderful love can be if it is fought for and cherished. With well developed characters full of emotion this book should not be missed.” Gabrielle from Got Romance Reviews

“Kudos to Viola Estrella for one Spicy Hot Romance read.” Larkspur from Long and Short of It

A love spell gone wrong. An interfering ghost. A nosy mind-reading grandmother. And a psychic man-hating mother. To say Sofia Good's life is a mess might be the understatement of the century. But when her visions forecast a love worth fighting for, she's willing to do just about anything to meet the man of her dreams.

Grayson Phillips lost his twin brother in a senseless accident, and now he’s trying to gain back control by maintaining a safe and uneventful “life plan.” But after sexy, quirky Sofia crash lands into his world he’s forced to rethink his strategy.

When a love spell is cast on the pair—drawing them together despite the odds—time will tell what fate has planned for them.

He set the glass down behind her. “Maybe I should go if you’re done with me, then,” he said, but didn’t budge. His dark gaze searched hers, waiting.

“Maybe you should.” Sofia shot back at him, feeling proud of herself. If only for a moment. “Isn’t that why you’re here? To get rid of me once and for all?”

He chuckled uneasily and shook his head.

“Funny. Ironic. Insane. All of the above.” In a quick move, he was in front of her again, leaning forward and bracing a hand on each side of her.

“What are…” She couldn’t finish the question. His face was so close to hers…his lips just a tongue-lick away. If she were a bolder woman, she’d do just that—stick her tongue out and outline the ridge of his sexy, fierce lips. Yep, a bolder woman might want to do that.

She swallowed. Time literally ticked by as the grandfather clock tick-tocked in the corner. The sound was usually soothing. Now it only emphasized the rapid beating of her heart.

“Do you want the truth, Sofia?” His eyes glistened in the lamplight as if he couldn’t hold his secret back for another second.

She squelched her curiosity as best she could, then jerked a shoulder up and resumed breathing. “Sure. Go for it.”

“Those dreams”—a fresh grin slowly curved his lips—“are all I have to look forward to. I don’t want them to stop.” He gave a short laugh. “And you know what?”

“Possibly. Because I have no desire to leave here tonight.” He brought a hand up and ran his knuckles across her cheek. “I don’t want to leave here. Can I stay? I promise to behave myself.”

The rocking chair creaked as Sofia Good pushed off the ground with the balls of her bare feet. The chair rolled back a heart-stopping distance and fell forward again. Back and forward again. Even after spending twenty-four years on this earth, she still loved the slight thrill a simple wooden rocking chair could give her.

Back and forward again.

Sofia planted her feet on the hardwood floor and pulled the pencil from behind her ear. With the flick of her wrist, she flipped her sketchbook open to where she’d left off and continued to draw
him
. Across the room in another rocker, her grandmother knitted yet another hot pink sweater for the winter ahead and hummed a familiar tune, one Sofia had heard throughout her life, though she’d never once asked the name of the song. What was the point? A title wouldn’t make the melody any more or less sweet.

In this family, with these women, sometimes knowing less was more. Certain things were better left unspoken.

When sleep brimmed with powerful visions—some horrid and gruesome—wasting conscious time rehashing was hardly ever a good idea. She dreamed of the future. Whether she wanted to or not. Bits and pieces were revealed to her through strong emotions like fear, love, grief, and lust. The “gift” of extra-sensory abilities had run in her family for as long as time existed. Nana had always said their gifts lay embedded in their DNA. Sofia never questioned it.

“He sure is a looker,” Nana said, cutting into the silence.

The late morning sun shone through the front window, forming a veil of light between the two. But Sofia had no trouble seeing Nana’s mischievous blue eyes peering over her knitting needles. Unfortunately, Sofia knew exactly who her grandmother spoke of. The star of her latest sequence of dreams, Grayson Phillips, slowly appeared on the sketchbook in front of her. She swirled her finger over his penetrating dark eyes, to the wisp of his hair hanging low on his forehead, and down to his full, inviting lips.

This was the only time since her discovery of precognition—sadly, during puberty—she was ever able to dream of her own future. This man—this sexy, kind, loving man—possessed it as far as she could see.

Too bad she hadn’t even met him yet.

“Don’t what?” A smile quirked the seventy-two-year-old woman’s red-painted lips.

Her Nana, Penny Jones, had her own special ability, and she seemed to exercise it to the fullest today.

Sofia shifted in her seat and tried not to smile back. The woman was shameless. “The rules are you can’t read my mind when I’m visiting. It’s not polite.”

“Honey,” Nana said with a wink, “it’s impossible to dodge thoughts when they’re as vivid as the ones you’ve been having lately. Is he now or in the future?”

“Future.” Sofia didn’t bother arguing the matter further. She’d been dying to tell someone about
him
. He’d been filling her nights with visions of their imminent lives together.

“It’s looking up, then?” Nana beamed.

It was no secret Sofia’s past and present needed a happily ever after. Boyfriends were hard to come by. After one date with a potential love interest she dreamed of his future with his cozy house, cute children, fun-filled family vacations...and a wife who wasn’t Sofia.

What was the point in falling for a man when he wasn’t her destiny?

But Gray—he was there. No doubt about that.

“Well…” Sofia thought it over. “It almost seems too good to be true. He’s funny and kind and
gorgeous
and, um, funny.” No way would she tell her grandmother about his superb talents in bed.

A month ago, when it all started, Sofia dreamed of losing her virginity to him. He'd been sweet and gentle, everything she hoped for. Since then, the visions had grown more sensual. Her cheeks burned from the mere memory.

“I knew it was only a matter of time before you’d find a man worthy enough for you to let into your heart.”

Sofia stood from the rocking chair and crossed the hardwood floor with her sketchbook in her hand. “I’m nervous.” She opened the page to where she’d been drawing Gray and handed it to her grandmother. “I can’t tell when I’ll meet him.” Usually her visions were clear and succinct. But not lately.

Another dream haunted her sleep as well, giving her snippets of details of a small plane flying through the sky with passengers who appeared to be dead. This dream was as hazy as those of Gray, making her wonder if somehow her gift were fading. She didn’t really want to lose her power. She wanted to be able to help these people.

Although a part of her did long to just be “normal.” To not have the responsibility of preventing a murder or a rape or some other tragedy. Most of the time it only took a simple anonymous phone call to the police.

How she’d stop an entire airplane of people from going up in the air, she wasn’t quite sure yet. Not much she could do about it now. Her visions typically showed her anywhere from one day to ten years into the future, but there was no way to tell.

“But when? It’s driving me crazy. I’ve been trying to read his alarm clock, find a calendar on the wall, something. But there’s nothing. I don’t even know where it all happens. All I know is that I don’t look much different than I do now.”

“Then it has to be soon.” Nana greedily sifted through the rest of the pages crammed with drawings of him. Gray wearing a suit and tie, a bathing suit, wrapped in a towel. Gray stepping out of the shower—

“I’ll take that, Nana.” She gently closed the book and slid it out of her grandmother’s hands.

Nana looked up at her with a wry grin. “Boy, I miss having a man around. As soon as you meet him, I want you to bring him here. So I can make sure his thoughts are pure.”

Sofia shook a reprimanding finger, but couldn’t help giggling at her grandmother’s silliness. “Remember the rules.”

When Sofia met this glorious man, she’d have far more exciting plans for him. Besides, bringing a man to Nana’s house would surely be relationship suicide.

“Rules schmules,” Nana grumbled, and picked up her knitting needles from her lap.

Sofia gave up. For today, anyway. Although her grandmother had a kind heart, she was a bit,
er
, eccentric. It wasn’t her fault. How could anyone with the ability to read minds ever lead a normal existence?