Beyond Broken (The Bay Boys #3) 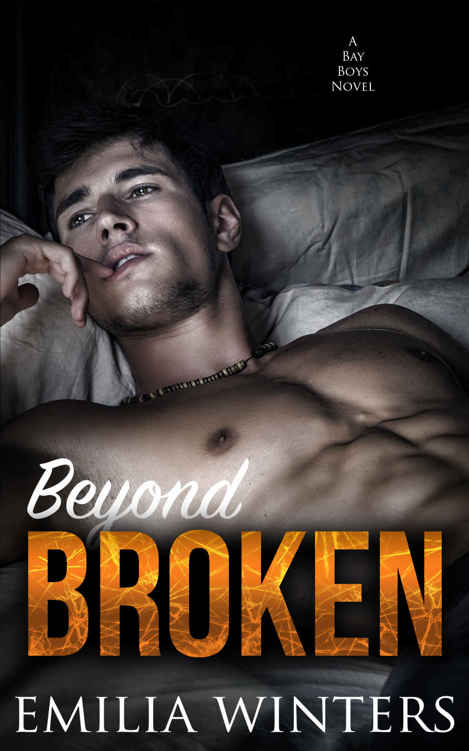 Names, characters, places, and events are the product of the author’s imagination.

Any resemblance to actual events, places, or persons are purely coincidental.

The rain soaked through his black suit and plastered his hair to his forehead.

All he noticed was the numbness and the after taste of beer on his tongue.

He’d bought the suit, since he hadn’t owned one.

It was for his uncle, not him.

Caleb still remembered the moment when John Montgomery found out about his lungs.

All those years of smoking had finally caught up with him.

Caleb had been with him in that sterile room.

His uncle had joked about death even then, mere minutes after he’d received the news from a very solemn looking doctor.

He’d told Caleb that he better not show up in jeans and a grease stained t-shirt to his funeral.

No, he wanted Caleb in a ‘fancy suit.’

He’d had the suit specially tailored and dry-cleaned.

And now it was soaked through.

But as Caleb took another pull on his beer bottle, he thought that it wasn’t so typical.

It was all wrong.

Because John Montgomery was six feet under, unable to feel the rain he’d loved so much.

Caleb slid his eyelids closed, shutting out the world, feeling the icy droplets lash his skin as if punishing him.

His uncle’s backyard fell away from his sight.

All the shit he’d have to deal with tomorrow fell away.

The faces of all those people who came to the funeral fell away.

Their sympathy and words fell away.

Everything fell away until Caleb could feel no more.

The night had just gone from bad to worse.

No, please don’t,” Madelyn Ashby pleaded under her breath.

She tried not to panic, even as her old Volkswagen pathetically sputtered and slowed.

She ran through a mental checklist as she maneuvered off to the side of the road.

Her brother had taken her car in to be serviced less than two months ago.

Was that the right word?

Could it be the oil?

She knew nothing about cars.

Nothing was blinking on her dash, so she was truly at a loss.

Her car gave one last shudder.

And then the engine cut out completely.

She tried starting it again with no success.

Quickly flipping on her hazard lights, Maddie took a deep breath, already fiddling with the hair ties on her wrist.

She assessed her situation.

She was somewhere between Benicia and Concord.

And it was already dark.

The last time she remembered glancing down at the clock on her dashboard, it’d read 9:40.

Pulling her phone out of her purse, she prayed that it wasn’t really dead like she thought as she attempted to turn it on.

Her finger trembled as she pressed the slim button on the top, holding it down with unnecessary force, as though the harder she pushed the more motivation it had to power up.

The screen showed no signs of life, as expected, and she let it drop back into her purse.

Maddie sat there for a few minutes, trying to control the panic that started to take hold.

She was on a dark road in an unknown location with no means of contact.

Her overactive imagination conjured up multiple scenarios, each one more horrifying than the last.

What if she was kidnapped?

You’re being stupid
, she chided mentally, inhaling a calming breath.

But she still had to do something.

She couldn’t very well sit in her car all night.

She needed to stay positive.

She was always the one who looked on the bright side.

That was what her friends had always told her, at least.

Making up her mind, Maddie pushed open the car door, feeling the biting chill of the late autumn air even through her black jeans.

It had felt wonderful to dress up a little for dinner with some of her fellow grad students, but now she regretted it.

With that mantra in mind, she tried to tell herself that there had to be a convenience store or a gas station nearby.

Then, she could ring up a tow truck service and then ask her brother to come pick her up, even though he’d be furious at her.

It would all be okay.

But the longer she walked, the more she remembered that she’d always been good at lying to herself.

She must’ve walked for at least two miles—at least that was how far it seemed with horror movie scenes wreaking havoc on her control—before she spotted lights.

A thrill of relief coursed through her when she saw that it was the border of a town, with a gas station right at its edge.

She hurried towards it as fast as her heels would carry her.

Once she entered the station’s store, the clerk standing at the counter eyed her with indifference even as she beamed at him.

“Hi, excuse me, I was hoping that I could use your phone, if you don’t mind.

My car broke down and I need to call a towing service,” she told him.

He jerked a thumb back outside.

Maddie flushed as she recalled her embarrassing predicament.

“Well, you see…I actually don’t have any money on me.

I’m having quite a night, let me tell ya.

I left my wallet at a restaurant and I was heading back to go get it, but then I got lost because my phone died.

And of course, my tank was low.

Luckily I had an emergency twenty dollars tucked in my glove compartment so I filled up and was on my way again when…” she trailed off, realizing that she was rambling and that this poor man didn’t want to hear her troubles.

Her brother affectionately told her that she had the annoying tendency to ramble on when she was nervous.

Ever since then, she’d always been uncomfortably aware of the quirk.

The man must’ve taken pity on her.

Or he just wanted to get rid of her because he sighed and craned his neck out the window, his gaze turned down the street.

See that building a little ways down with the lights on?” He pointed in the general direction and Maddie thought she knew which building he was referring to.

“That’s an auto shop and it looks like someone is still around.

They’ll be able to help you out.”

Affection for this stranger blossomed in her chest and she smiled so widely that her cheeks hurt.

“Thank you so much.

I really appreciate it.”

But, as Maddie headed out of the gas station and started towards the building, she thought she’d coaxed at least a little smile out of him.

With delight, Maddie saw that he was right.

Montgomery Restoration & Repair
was what the sign said out front and the lights in the garage were still on.

Filled with renewed hope, she walked up, her heels clicking loudly on the pavement.

She heard male voices, laughter, and the sound of tools clinking on cement.

Some guy was doing an impression of his mother-in-law and Maddie couldn’t help but smile at his shrill voice.

A few more steps and she rounded the corner of the L-shaped building and into the fluorescent lit garage.

An older man was hunched over the engine of a car and his long grey hair, pulled back with an elastic band, was peeking out from under the hood.

“And then she tells me that she wishes her daughter had married one of those hot shot, suit-wearin’, white collar fellas instead of a dirty mechanic who always has grease stains on his hands and smells like sweat and oil.

The other man was actually a teenager she noticed.

He looked like he could still be in high school, with a pair of cute dimples and acne scars.

He was busy wiping his hands on a rag, his head thrown back in laughter.

But when he righted himself, his gaze landed on Maddie and a startled look came over his features.

“Hi there,” she greeted softly with a small smile, stepping into the garage gingerly, as though she might be thrown out any second.

She found it a little intimidating to say the least and it smelled like fuel and cement.

With a loud curse, the startled older man came up so fast that he banged his head on the hood of the car.

Maddie gasped and started apologizing profusely as he turned to face her.

“No harm done, sweetie,” he said with a grimace, rubbing the back of his head.

Do you know how many times I’ve hit my head like that over the years?

No wonder my wife thinks I’m dumb as rocks.”

He started wiping his hands on a dirty rag, looking her over with curiosity.

“I, uh…” she glanced at the teen and noticed that he looked a little pink in the cheeks.

“My car broke down a mile or so away.

The man at the gas station said you guys might be able to help?”

Although, we have to charge more for a tow since it’s after hours.”

She flushed again, hating that her own stupidity was causing her more than enough problems for tonight.

It’s just that I left my wallet at a restaurant and I’m not sure I can get it back tonight.”

The older man’s eyebrows raised a fraction and Maddie quickly hurried on, not wanting him to think she was trying to scam them.

“But I can pay tomorrow, I swear!

I can leave my name and address.

Any personal details you need so you could track me down.

Not that you’ll need to,” she hastened to reassure them.

“And obviously you’ll have my car as collateral.

Echoes of the Past by Mailer, Deborah
Night's Deep Hush: Reveler Series 4 by Erin Kellison
Death By Water by Damhaug, Torkil
Inside Out by Grayson Cole
The God Hunter by Tim Lees
Maggie Malone Gets the Royal Treatment by Jenna McCarthy
To Marry The Duke by Julianne Maclean
Midnight Sex Shop by Grey, T. A.
The Dragons Blood Key: Legend of the Dragon's Blood Key - Book 1 by Linda L Barton
5 - Choker: Ike Schwartz Mystery 5 by Frederick Ramsay