Read Beyond the God Particle Online

Beyond the God Particle 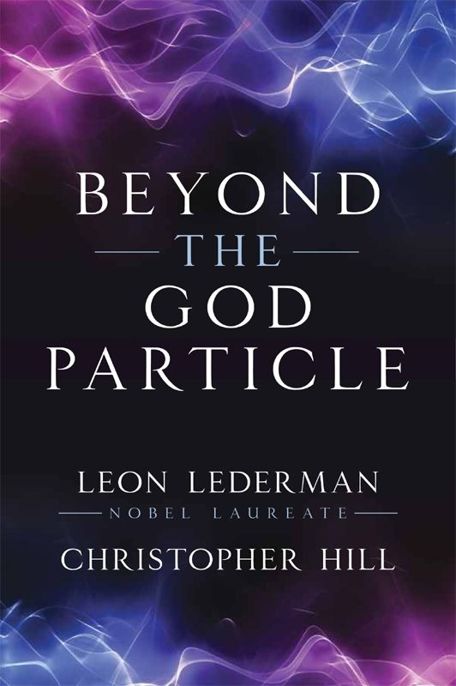 Beyond the God Particle
. Copyright © 2013 by Leon M. Lederman and Christopher T. Hill. All rights reserved. No part of this publication may be reproduced, stored in a retrieval system, or transmitted in any form or by any means, digital, electronic, mechanical, photocopying, recording, or otherwise, or conveyed via the Internet or a website without prior written permission of the publisher, except in the case of brief quotations embodied in critical articles and reviews.

Trademarks: In an effort to acknowledge trademarked names of products mentioned in this work, we have placed
®
or
™
after the product name in the first instance of its use in each chapter. Subsequent mentions of the name within a given chapter appear without the symbol.

Chapter 2. A Brief History of the Big Questions

Chapter 3. Who Ordered That?

Chapter 4. All About Mass

Chapter 5. Mass under the Microscope

Chapter 6. The Weak Interactions and the Higgs Boson

Chapter 12. Beyond the Higgs Boson

We thank our dear late editor, Linda Greenspan Regan, for her tireless efforts in initiating this project, and her excellent editorial skills throughout our previous projects,
Symmetry and the Beautiful Universe
and
Quantum Physics for Poets
. We also thank Julia DeGraf, Jill Maxick, Brian McMahon, Steven L. Mitchell, and Grace M. Conti-Zilsberger, who have served as our editors through the oft-time hectic completion of this book. For useful comments and advice, we thank Ronald Ford, William McDaniel, Ellen Lederman, and especially Maureen McMurrough and her dachshunds.

The authors also underscore the importance of the learning of science by young people. Here, the continuing efforts of Prometheus Books in the publication of science books are gratefully acknowledged, as are the huge contributions of schools throughout the country. We especially acknowledge the Illinois Mathematics and Science Academy, recognized as one of the most successful science high schools in the nation, and Fermilab, the greatest national laboratory in the Western Hemisphere and our favorite in the solar system.

Out of the mid-wood's twilight

Into the meadow's dawn,

He skips through the copses singing,

And his shadow dances along,

O Hunter, snare me his shadow!

O Nightingale, catch me his strain!

Else moonstruck with music and madness

I track him in vain!

—Oscar Wilde, “In the Forest”

There is a serene valley stretching about Lac Léman, from the spectacular French Alps, with Mont Blanc looming in the distance to the east, and the ancient round-top Jura Mountains to the west. This is the countryside of France surrounding Geneva, Switzerland, one of the most beautiful regions in all of Europe. It is a historic place; a center of banking and watchmaking; the home of Voltaire, the grandmaster philosopher of the Enlightenment; the host to the League of Nations, forerunner of the United Nations; a mecca for Roman history buffs, foodies, skiers, and train watchers. Geneva is a French-speaking canton of Switzerland, on the border with France, not more than a few kilometers from downtown.

Within the environs of Geneva we find, today, thousands of the world's best-trained and most highly educated physicists hard at work. In a metaphorical sense, they have become the enchanted dwarves, the “Nibelungen” of the ancient Norse pagan religion who lived in a mystical region called Nibelheim, where they mined and toiled in the bowels of the earth. They ultimately created, from the gold of the Rhine, a ring of enormous magical power for whoever possessed it. It is here in Geneva that the metaphorical Nibelungen, the modern-day particle physicists, have fabricated, deep in the bowels of the earth, a mighty ring of their own.

The physicists are real and their ring is real. It is not made of gold but rather of tons of steel, copper, aluminum, nickel, and titanium, enclosed within enormous vats of super-cooled liquid helium, decorated with the most resplendent and powerful electronics to be found on Planet Earth. With the mighty ring near Geneva, some 300 feet underground, the scientists painstakingly toil hard into the early morning hours. The product of their labor is not gold but the creation of a new form of matter, far, far more valuable than gold and never before seen in this world. While the Nibelungen ultimately unleashed magical powers to the bearers of their
ring, the physicists are revealing, for the first time, hitherto unseen, mysterious, and ultimate powers, the forces of nature, forces that have sculpted the entire universe in all things from galaxies to stars, humans to DNA, atoms to quarks.

The ring near Geneva is nothing less than the most powerful particle accelerator on Planet Earth. It is called the Large Hadron Collider, or LHC. It belongs to CERN, the
Conseil Européen pour la Recherche Nucléaire
(European Council for Nuclear Research). CERN belongs to Europe and is the largest physics laboratory on Earth, conducting basic research into the inner structure and behavior of matter. Produced in the LHC are the most energetic collisions between subatomic particles ever achieved by humans in a laboratory. In its simplest terms, the LHC is the
world's most powerful microscope
, and it is now the foundry of the “Higgs boson,” whimsically known as the “God Particle.”

The entire undertaking of constructing and operating the LHC and harvesting its new form of matter, with its far-reaching results for the science of physics and the human understanding of the laws of nature, will ultimately bestow enormous economic power and prestige to its bearers, the countries of Europe that heroically toiled to build and who now operate the powerful ring. And to an extent, the US will benefit for contributing some funding and collaborating in the effort.

But the great LHC and its modern and grand scientific triumph for Europe exists in large measure because the US screwed up big time.

The US botched an even greater undertaking to build an even bigger ring, deep in the heart of Texas, in a picturesque small farm town called Waxahachie, about forty miles south of Dallas, some twenty years ago.

The story of the Superconducting Super Collider (SSC) is a long and winding tale, fraught with eager anticipation; then missteps and setbacks; abounding with technical, political, and fiscal difficulties; and in the end leaving dashed hopes and careers behind. It pains us to think about it all now. The SSC was a grand and noble undertaking, and it would have been the ultimate jewel in the crown of American—no, worldwide—scientific
and industrial prowess, a reassertion of that great Yankee can-do know-how of yore. But alas, the SSC died a stillborn death in 1993.

It is the height of irony that at the very same time the SSC perished, several major revolutions were occurring in other spheres that had a common genealogy, all deriving from and driven by basic, non-directed research in modern science. The community of scholars, known as the
academic economists
, who hang out at such places as MIT, The University of Chicago, Princeton, and other vaulted ivory towers, were finally comprehending, in detail, what it is that actually causes economies to grow and prosper.

Astonishingly, over the 200 years since Adam Smith wrote
The Wealth of Nations
, the simple question “What makes economies grow?” had not been answered. Why had the seething misery of the 1820s Dickensian London given way to the hustling, bustling world center of prosperity in the Victorian London of the 1890s? Even the first modern Nobel Prize–winning economist, the great Paul Samuelson—with whose world-renowned textbook many of us slugged out Economics 101—had predicted that after World War II the Great Depression would return. But it didn't. Why not? The opposite happened, as we entered a time of growth and prosperity that lasted to the end of the twentieth century. Why?

Keeper of the Black Stones by P. T. McHugh
Closer Than A Brother by Hadley Raydeen
Much Ado About Muffin by Victoria Hamilton
Deadly Edge: A Parker Novel by Richard Stark
Belonging by Robin Lee Hatcher
Tehran Decree by James Scorpio
Goldilocks by Andrew Coburn
Tales of Adventurers by Geoffrey Household
The Pastor's Wife by Diane Fanning
The Moment of Everything by Shelly King