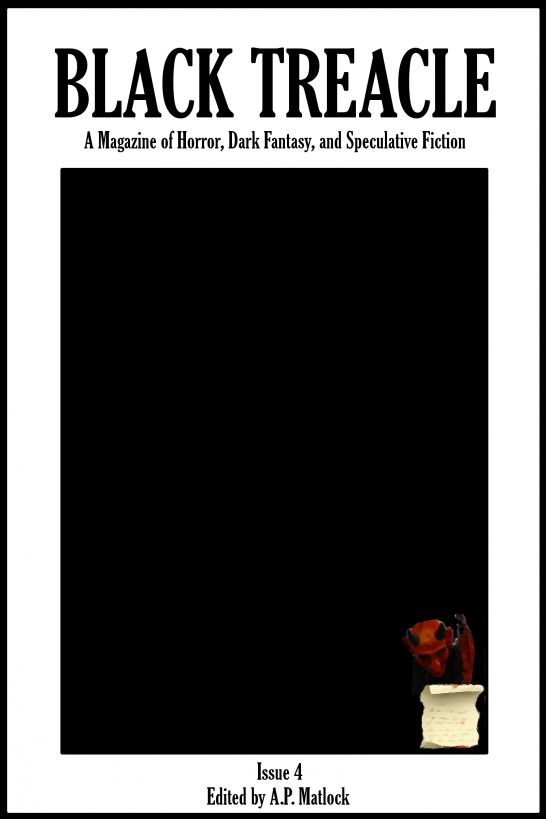 “
Nainaine of the Bayou” Copyright © 2013 by
Christopher Keelty

Thank you for
downloading this free ebook. You are welcome to share it with your
friends. This book may be reproduced, copied and distributed for
non-commercial purposes, provided the book remains in its complete
original form. If you enjoyed this book, please return to
Smashwords.com to discover other works by this author. Thank you
for your support.

Black Treacle
Magazine is a free bimonthly Magazine dedicated to original short
fiction in the Horror, Dark Fantasy, and Speculative fiction
Genres. Released on the first or second Tuesday of each month

Hard to believe
it is August already but time really does fly when you are having
fun.

Our next issue
is just around the corner, so I wanted to take a little time to
talk about it.

October is a
fine month. It might even be my favourite month. We’ve got
Thanksgiving at the beginning (in Canada) and then Halloween at the
end. Two festivals of gluttony. Oh, turkey! Oh, candy!

To celebrate,
October’s issue will be Hallowed-themed. You can see the Black
Treacle website for more details but for the month of October we
will only be reading submissions that have strong association to
Halloween.

Four down, two
to go!

A.P. Matlock
is a Writer and the
Editor of
Black Treacle
Magazine.

“Imp!” My
master’s voice rumbled with the comforting malice of a thousand
forges. “What the Heaven is this?”

I leaned
forward hoping to appear sufficiently inquisitive and peered at the
Soul List. Created from the flayed skin of the eternally damned,
the scroll unfurled across his obsidian desk. Smoke trailed from
the blackened rim of the hole he’d made with his stiletto-like
finger. Around the hole the remaining letters of a name fading from
view.

Blinking once,
I blinked again. Even by the bastardized physics of Hell, something
like that should have been impossible. But my master demanded and
answer and I made a great show of pinching my features in pensive
repose, heeding the first lesson upon my servitude that ignorance
was an undesirable virtue.

“Ah, yes,” I
said. “Well,” I considered. Having not a clue why this had
happened, I ventured an educated guess. “Perhaps his situation has
changed.”

“Perhaps?”
Spittle, searing hot as molten lava, peppered my exposed skin.
“This man is supposed to be damned. This man, this Tomas Luis
Grandon, is scheduled to arrive today, this very hour. Satan has
been awaiting his execution for years. Now, he isn’t arriving at
all! Tell me, Imp, how does a damned man become undamned?”

Trembling, I
gave the list a closer viewing in vain hope I might glean some clue
to the mystery. “He might have found religion.” My fingers caressed
my blistered skin. “I understand that happens a lot in prison.”

My demon
master dismissed my suggestion with a wave. “That born again
nonsense doesn’t work for capital crimes. You kill your fellow man;
you burn--that’s the rule.” My master pointed upward. “Even He
can’t change that. No, it’s something else.” He exhaled, filling
the room with the pleasant stench of brimstone and putrefaction. “I
can’t have this, Imp. Satan wants his soul. You must go
Outside
and see what has happened, or we’ll both know
torments like no other.”

Argument was
pointless, and I turned away filled with trepidation.
Outside
, where the air was fresh and the wind felt like a
lingering kiss on the skin.
Outside
meant the land of the
living, and because I didn’t belong, I could never stay.

With a belch
of amorphous exhaust, the prison bus unloaded its cargo of
convicts, I among them. Shackled, with over-sized luminescent
orange coveralls, I felt quite comfortable in my disguise.

Eventually, a
portly guard met us. He had a nasty smile and body odor hung about
him like sulfurous smog. His silver name tag claimed he was Gary
Furlong. Gary, however, was neither a real guard, nor a real human.
He was a minion, a spy for my master, and thoroughly ungrateful for
the opportunity.

Gary led us
through the mundane chore of processing. After a meaningful look in
his direction, he grudgingly escorted me to the nearest empty
washroom.

“What are you
doing here, Imp?” Gary crossed thick arms across his ample belly.
Bullying prisoners had spoiled him and he needed a reminder of who
was subordinate to whom. I began by sloughing off my shackles and
flinging them at his flabby chest.

“Our master
has denizens in every office from political to postal,” I said.
“His ears are in every gossip session in every coffee shop in the
world. As you might guess he is very well informed. He likes it
that way.
We
like it that way. So, you can understand our
surprise when Tomas Grandon managed to get himself off the Soul
List, and more importantly, why we weren’t informed of this turn of
events.” I leaned in close and with one long finger touched him
just under his doughy second chin. “Be careful how you answer.”

Gary licked
his thick lips as his tiny mind tried to process just how he had
lost the advantage. “I was about to send my report,” he answered
slowly. “But everything happened so fast and I had to do double
shifts.”

“Double
shifts, Gary?” Perhaps it was the stench of prison air, but I felt
an unaccustomed fugue, and let my arm drop to my side. “Very well.
I suppose as a human you need to make a living. I’ll just have to
report to our master that you thought work more important
than--”

“DNA!” Gary
jiggled about like a three-year-old with a full bladder.

“Deoxyribonucleic acid,” he said. “A double helix of repeating
molecu--”

“I know what
DNA is,” I snapped. “What’s that got to do with our master’s
missing soul?”

“Everything,”
said Gary. “Some lawyer found DNA evidence from the crime scene
that didn’t match Grandon’s DNA. That bought him a last minute Stay
of Execution from the governor.”

My head tilted
to the side. “After all these years this evidence surfaces
now?”

Gary forced
himself to straighten. “All I know is some woman lawyer approached
Grandon about a last ditch effort. I guess it paid off.”

I drew in a
long breath. “A lawyer fouled this up?” Taking the shackles from
the floor where they landed, I slipped them over my wrists and
ankles and locked them in place. “Never mind,” I said. “If she
dared tamper with the world’s Order we’ll have her soul, too.”

Kelly
Llewellyn practiced law from a strip mall five miles further from
the state courthouse than any reputable attorney. Her tweed power
business suit was two-years out of style. Her hair, dyed blond with
black roots, curled around her head like an ice cream swirl. “What
can I do for you, Mr. Brimstone?” she said, the remnants of a light
Welsh accent fighting a losing battle with an easy Southern
drawl.

Since that
Daniel Webster incident, I’ve never like so-called members of the
bar. Given proper provocation, I’ve happily bitten off the
occasional counselor’s head in the past. However, I needed
information and therefore struggled to remain civil.

“So glad you
could make the time for us, Ms. Llewellyn,” I said. “As I told you
earlier, I’m writing a magazine piece on the upcoming release
of--”

“Yes, about
that,” Llewellyn interrupted. “How did you come across that
information? That news is so recent it’s barely fact.”

“I am an
investigative reporter,” I replied as if that alone should answer
this and any future queries.

Llewellyn
leaned back in her swivel rocker and touched her index finger to
her thin lips. “All right,” she said. “What do you want to
know?”

“Where did you
get the DNA evidence to acquit Tomas Grandon?”

“From the
evidence storage room at the courthouse.” Llewellyn shook her head
like the answer was obvious. “A single strand of glorious hair from
the crime scene . . . not belonging to my client, of course.”

“Of course,” I
said, my tone brittle as a dead fly’s wing. I knew the crime scene
intimately. There had been no hair strand to find. “Who told you of
this hair? You are, at best, a mediocre attorney and have neither
the skills nor the imagination to take on a case like Grandon’s
unless you had an edge. Who contacted you?”

I launched
across her desk and grasped the lapels of her cheap business suit.
Her mouth dropped open, her expression pure terror as my head
tripled in size. My jaws unhinged like a python of prehistoric
proportions revealing rows of long teeth dripping greenish-yellow
pus.

“I--I don’t
know,” Llewellyn whimpered. “I got an email from an anonymous
sender. It said to check hair samples for DNA. That’s all it said
and that’s all I did. Everything was in storage. I didn’t do a
damned thing wrong. And it saved my client. God, oh, God, what’s
wrong with that?”

“What’s wrong
with that?” Putrid ooze sprayed her face as I worked words around
my massive fangs. “Have you not heard the phrase, in His own image?
No? Well, let me explain, you silly woman.

“The Other
Side holds much credence in honesty, and imparted upon your kind
the best lie detector in creation. Your foolish justice system is
merely performance art. DNA, the very building blocks of humankind,
proves right from wrong, good from evil.” I leaned ever closer
toward Llewellyn’s ashen face until my teeth reflected in her wide
eyes. “That means if you sin, you are ours... that is, until
now.”

The lawyer’s
face went through a series of contortions and it was questionable
whether she was going to scream with insane terror or vomit.
Instead, she did something quite remarkable and unexpected. Body
trembling as though a conduit of electric current, she pointed at
the door with a tremulous finger.

“I did nothing
wrong! Now, get out, you crazy freak.” Her hoarse shouts rose into
a crescendo of near lunacy. “Get out, God--”

Had she
finished, Kelly Llewellyn might have secured herself a place in
heaven by rebuking a duly appointed representative of Satan.
However, as her head slid down my gullet, that eternal salvation
would never come to pass. It was a close thing, but as I dabbed
blood from my chin with a scrap of her imitation silk shirt, I
comforted myself that I was well within the Ten Second Still Clean
Rule.

Human
intelligence is an oxymoron. How can any sentient creature
willingly choose the darker sides of their nature knowing the
consequences of such actions? Physics is Physics. For every action
there is an equal reaction. To believe in Him is to believe in us.
Faith is a package deal, and make no mistake, dogma is irrelevant.
Good or evil, right or wrong, can or cannot.