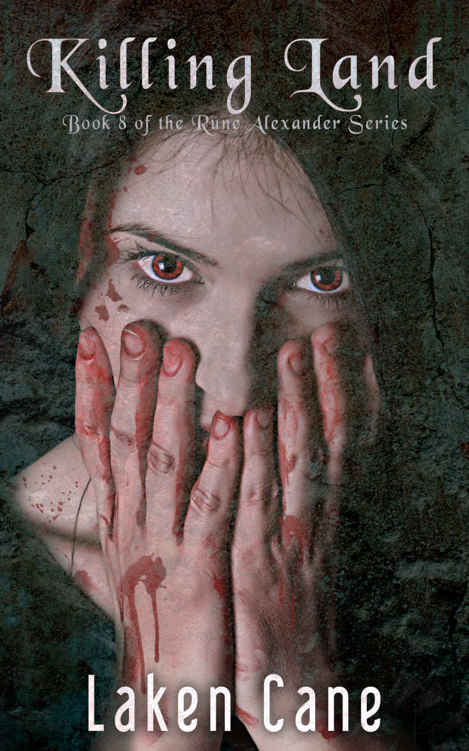 This book is licensed
for your personal enjoyment.
Ebook
copies may not be
resold or given away to other people. If you would like to share with a friend,
please buy an extra copy, and thank you for respecting the author’s work.

For more information
about the author, you can find her online at

For those who love a
berserker, dream of a cowboy, and miss a friend.

For those who will
always carry hope in their hearts.

She lay on the ground, unable to move.

Her eyes were closed.

She kept them closed. If she didn’t look, she could pretend
her berserker was lying at her side.

That he’d chosen her.

She could pretend the cowboy was leaning against a tree,
slapping his hat against his thigh to rid it of dust.

That he’d chosen her.

She could pretend Lex was glaring at nothing, her sightless
eyes dancing in the quiet beauty of her face.

That she’d chosen her.

But when a sound forced her to open her eyes, the only other
person in the graveyard was Roma, lying on the cold ground a few yards away,
seizing.

Rune crawled to the girl, glancing around the area as she
went.

Tombstones, old and crumbling and mossy, embraced by nests
of debris and overgrown with dry weeds, showed the cemetery’s neglect.

Wormwood was never neglected—the ancient graveyard and home
of the
Others
was full of magic and mystery. It was
respected, feared, and very well-tended.

Yet surely she was in a little visited part of the huge
Wormwood, because where else would the path have thrown her?

Nikolai was nowhere to be seen, but the sun was high and
he’d likely gone into the ground to save himself.

She wondered if he regretted leaving Skyll and losing the
sun.

No one else was there.

“Roma,” Rune said, her teeth clacking together like an old
Halloween toy. Her hands shook when she reached out to smooth Roma’s hair.

She knew better than to mess with a seizing person. She
could only wait.

Roma’s clothes were torn and ragged, with missing pieces
that looked as though some long-toothed creature had grabbed on and tried to
pull her away from Rune.

The path home had been treacherous and unkind, and she was
nearly certain she hadn’t made it back with all of her mind, strength, and body
intact.

She’d left her heart behind, but that wasn’t the fault of
the path.

She took a deep breath and did the one thing she was almost
afraid to do. She checked to see if her monster was still with her.

She shot out her claws—they ripped through the quiet, cold
air, along with the sound of her relieved cry. She dropped her fangs.

And all was well.

She ran her tongue over her fangs, carefully, and stared at
her claws for a few long seconds before pulling them back in.

Roma eased, finally, and lay in a deep unconsciousness.

Groaning from the effort, Rune stood and then began to
search the area. Her clothes had fared little better than Roma’s, but she
didn’t care. They weren’t clothes she’d ever wear again.

Newly healed wounds had ripped
open,
and new scars dissected old ones. She was bloody, filthy, and bereft. But she
was fucking
home
.

She gave a little shout of joy when she realized she still
had the shotgun strapped over her chest. She pulled the strap over her head and
gave the gun a quick inspection. It seemed unchanged.

The cemetery was eerily silent, and though night was hours
away, the silence was strange for Wormwood.

There were always
Others
in
Wormwood.

But she’d been so slow getting
back,
the Others had likely thinned out.

She put a hand to her chest. “Shit.” She turned in a slow circle.
“Gunnar! Gunnar?” She felt like she’d been searching for the ghoul for most of
her life. Sometimes she found him…

Gunnar didn’t come slinking from behind the trees.

He lumbered toward her, shaking his head like a colony of
mites had taken up residence in his ears. When at last he reached her, he sat
on his haunches and stared at her accusingly.

“Sorry, dude. The path is a son of a bitch.” Then her breath
hitched as she gazed unseeingly into the distance.

The portal was closed and the path was no more.

Her people, her crew, were gone forever.

But she
had
seen him, and she had loved him. There
was comfort in that.

A second chance to tell Z she loved him. That she was sorry.

The sudden call of her crow cut through the heavy, gray
silence of the graveyard, causing both her and Grim to flinch.

The crow landed, his talons encircling her outstretched arm
like sharp, dangerous bracelets.

“You made it,” she murmured.

He cawed gently as he twisted and tilted his head to survey
the cemetery. He eased his way up her arm and though she would never have
thought it possible, he flattened his wings, became somehow less huge, and
perched upon her shoulder.

There was magic in her crow.

His weight was warm, solid, and calming.

With Grim at her side and the crow on her shoulder, she
walked back to Roma. She didn’t want to try to force the girl awake, but she
was eager to leave the confines of Wormwood.

To find her people so she could break down in the safe
circle of their arms.

Who was going to hold her when she thrashed in her sleep,
lost in the terror of her nightmares? Who was going to be overbearing and
arrogant and bossy and try to force her to be safe?

But she shook her head and pushed the thoughts away. She
refused to dwell on the berserker, the cowboy, or the little blind
Other
.

Their choices were their own. They’d hurt her, but that was
okay.

She was heartbroken, not angry.

She needed to be angry.

Roma stirred, and Rune waited patiently as the girl opened
her eyes and got her bearings.

It didn’t matter how tough a girl was.

Walking the path would kick her ass.

“Let’s go.” She held out her free hand to help Roma to her
feet.

After Roma stood, she hit her front pocket with the palm of
her hand, and then gave a quick grunt of joy as she pulled her slingshot free.

Rune pressed a hand to her stomach.

She was back. She was home.

And she was the cure.

It’d take the remaining
Others
a
little while to heal, but they would heal.

“What’s wrong with that?”

“Something changed on the path over.” And Rune wondered what
had changed for
her.

Redness climbed the girl’s cheeks and she looked away. “I’d
rather not say.”

The silence was uncomfortable for only a moment.

“You’re very pretty,” Roma said. “Even with
your
…” She motioned at Rune’s body.
“Shabbiness
and dirt.
And scars.”

Rune’s shoulder dipped painfully as the crow shoved himself
off her and took to the sky. Grim gave a grumpy bark, his head low.

Rune had no idea what to say to Roma, so she changed the
subject. “Grim is hungry, too.
And thirsty.”

The crow circled above, a black speck against the dull, gray
sky, as though scouting the area for them. He flew back in seconds and then
away again, coming back every few moments as though to assure
himself
that she was still there. Or maybe it was to assure
her
that
he
was still there.

They walked for just a couple of minutes before the land
tilted in a gentle incline and the trees began to thicken even as the
gravestones became sparser. The only sounds were strident birdcalls and the dry
scampering of small animals.

And then they stepped from the edge of the trees and found
themselves on the top of a hill, and Rune held her breath as she surveyed the
few scattered homes that sat in quiet disrepair below.

“This isn’t Wormwood,” she whispered.

Roma’s eyes lit with panic for a second. “We didn’t make it
to your world?”

Roma took a step closer. “What will we do?”

“I’m going to leave Grim with you, and I’ll follow the roads.
I’m fast, remember. I’ll find people and bum a phone.”

Rune patted her arm. “I’ll be fine.” She hefted her shotgun.
“Even if I didn’t have my monster, this baby would destroy any enemy stupid
enough to fuck with me.”

“Then you should leave it with me.”

“Well, hell.” Rune was nearly certain Roma was smirking as
she took possession of Rune’s deadly weapon. “I’ll want that back, Roma.”

Roma waved her slingshot and tossed the shotgun back to
Rune. “My slingshot is the only weapon I need, Princess. I just wanted to touch
the gun.”

“I’m not
Princess
.” Rune squeezed the shotgun, a
little relieved. She didn’t need the gun, but she sure did like it. “Not here.
I’m Rune. Call me Princess again and I’ll send you back to Skyll.”

Roma paled. “I must stay here to take care of you. That’s my
duty now. You saved my life so—”

“Relax, Roma. I couldn’t send you back even if I wanted.”
She smiled at the girl,
then
knelt beside Grim. “Take
care of each other. I’ll be back with a car.”
And with her
crew.
She hoped.

Before Roma could say another word, Rune took off, leaving
behind the dog and the girl. The crow—Shiv Crow, as she had named him—flew away
and disappeared.

As she ran down the hill, she kept images of Ellie, Jack,
Raze, and the twins in her mind.

The only crew she had left.