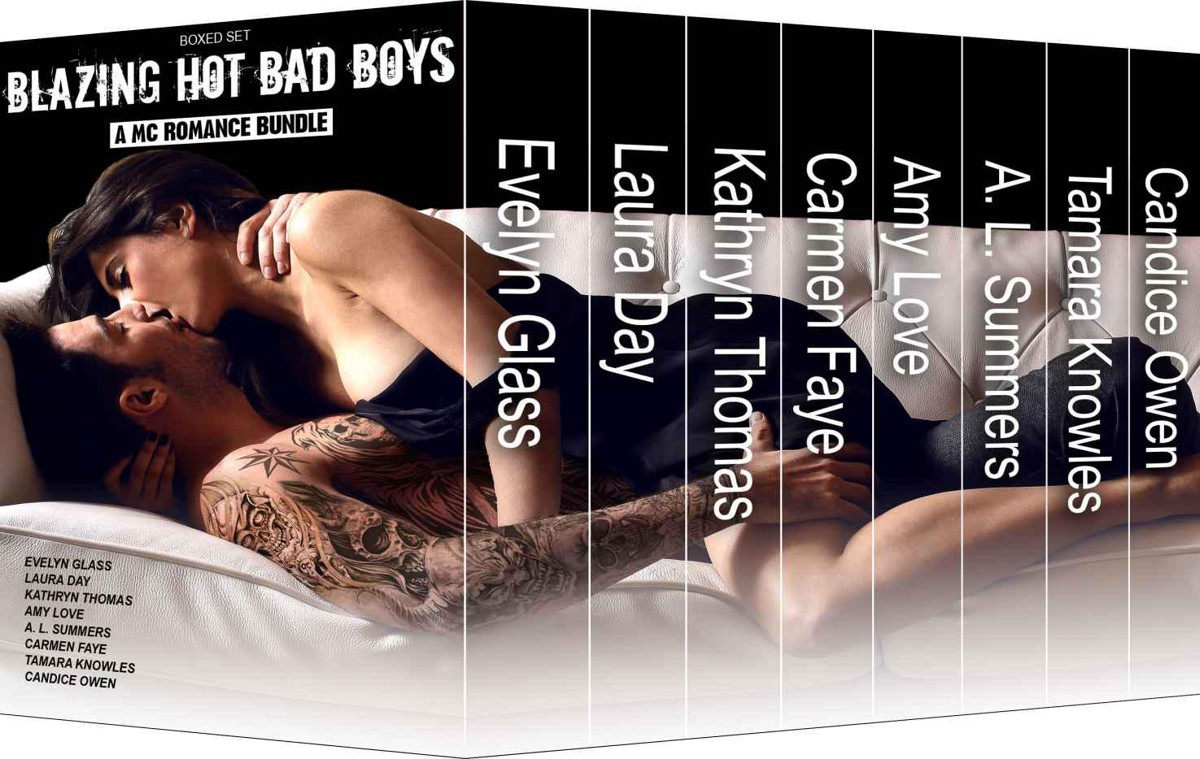 This is a work of fiction. Any names, characters, places, events, and incidents are products of the author's imagination or are used fictitiously and are not to be construed as real. Any resemblance to actual events, locales, organizations, or persons--living or dead--is entirely coincidental.

Blazing Hot Bad Boys Boxed Set – A MC Romance Bundle copyright @ 2014 by Evelyn Glass, Laura Day, Kathryn Thomas, Amy Love, A. L. Summers, Carmen Faye, Tamara Knowles, and Candice Owen. All rights reserved. No part of this book may be used or reproduced in any manner whatsoever without written permission except in the case of brief quotations embedded in critical articles or reviews.

I will never forget this day. I’ll never forget how it feels to hold her and press all of her skin next to mine. To finally touch her everywhere, to taste her, to hear the sounds of pleasure she makes. She pulls at me with an invisible thread, and I fall into her again, my face in her hair, my hands on every inch of her soft skin. When her fingernails scratch my back the sharpness spurs me on. There is nothing but this feeling of possessing her and being claimed by her in return, of giving her everything willingly and knowing it is already hers. She is every fantasy I’ve ever had, and I understand now why men kill for this, wage wars and die for this. Ali, Ali, Ali… I whisper her name like a prayer as I let go inside of her.

She said I didn’t hurt her the first time, but I know she lied to make me feel better. The second time we did it, though, she cried out my name over and over and I felt like a king. Now I understand why the poets called it “the little death.” It feels like leaving your body and going to heaven. The other girls I was with before her were nothing like this. We’ve been in my room all day, and it’s like we can’t stop. I’ve lost count of how many times I’ve buried myself in her. It’s a hunger I can never satisfy.

We knew when we got together that it was just for the summer. She’s going away to College Station and I’m going on the road with my cousin. Maybe we should’ve stopped with that kiss on graduation night, but we’d both wanted it for so long. It was always going to happen, but it was never going to last. She’s meant for a life I’ll never be a part of, and I knew that even when I took her hand and pulled her toward me.

Right now I don’t want to think about Ali’s future, the football games and parties she’ll be going to without me, the people she’ll meet that I won’t even know. There’s a guy out there for Ali who will give her everything she deserves, and the thought makes me want to smash the entire world because I can’t be him. I can’t try to hold her back, because if I do she will lose everything. She would give it all up for me, too, and that scares me more than thinking about her with someone else.

In this moment, we belong to each other completely. Tomorrow she’s going, and the next time we talk it will all be different. I promised I would call her, wherever I am, in one month. The thought of spending a single day without hearing her voice is torture, but I know that soon enough I’ll face something even worse than missing her. I will lose her, and that leaves a foul taste in my mouth like dirty pennies.

I don’t want to think about the first time I call her and she doesn’t sound excited to hear from me. I don’t want to consider how quickly she’ll get over me, or how soon it will be before she stops saying my name like a promise. I can’t stop making love to her right now, not just because I’ve wanted to for years but because it’s the only way to keep me from doing what I can never do.

I want to beg like a child for her to come with me. I want to tell her to hop on my bike and disappear with me, but I can’t be that selfish. So I swallow the words I can’t ever say to her:
Ali, te quiero. Ali, te amare por siempre
. The words beat and whisper in my heart instead. I feel them as the sweat of my body mixes with the sweat on hers and our lips claim each other.

Ali, I love you. Ali, I will always love you.

It was obvious that Bobby was trying his damnedest not to look worried when Ali dragged herself in from the barn, grimacing at the sharp pain in her hamstring. She stifled a groan as she tugged off her boot and waved him away when he took a step toward her to help.
It would be a foolish man who’d touch me like this when he’s dressed like that
, she thought, admiring his perfectly pressed shirt as she brushed more dirt off her denim-clad thigh.

“Right. The thing. I didn’t forget.”
And just how in the hell am I going to wear heels tonight?
She took a deep breath and flashed him her brightest smile, hoping to reassure him that she could, in fact, spend the evening teetering on four-inch heels with a pulled muscle.  “Sweetheart, don’t you worry about me. I’m just a little sore, but I’ll be dressed and beautiful and on your arm all night even if it kills me.”
Which it might.
Another twinge ripped through her as she tried to stand, but she bit back a groan and pushed through it, hauling herself to her feet with a smile. She limped into the kitchen and leaned in to offer Bobby a kiss.

“I’ve got no worries about you looking beautiful.” He cupped her head in his hands and gazed at her a moment as if trying to decide whether or not to believe that she was really okay. “I’d like you in one piece, though,” he murmured, brushing his lips softly over hers.

“I’m fine, really. I have no idea what spooked Tip or how I even fell. It’s just a pull—I’ll go soak it and I’ll be good to go this evening.”

“Thank God it’s not serious.” His deep sigh was one she’d heard before, and she didn’t want to have that argument again, not this morning. He pulled back and gave a slightly imperceptible shake of his head. “I just can’t stand the thought of anything happening to you.” His thumb trailed tenderly over her lower lip.

“I know.” And she did know. But if there's one more argument about her continuing as a riding instructor after the wedding, she had half a mind to call the whole damn thing off—no matter how many people were invited to the Dawson estate.

Just the thought of the sheer scope of their wedding caused her more pain than the pulled muscle.
Just let me make it through the next seventy-six days, God, that’s all I ask.
The once-intimate guest list, which she’d handed to the mothers with demands to only add a few people, had swelled to well over four hundred. Her dreams of a quiet ranch wedding had been hijacked by her mother. With the help of Bobby’s mother, it had turned into a social event of epic proportions.

But no reason to punish him for the mess their mothers had made of their special day. She bit back her displeasure and kissed him again, long and deep.

“If you didn’t smell like a horse, I’d take you right here on this countertop,” he murmured against her mouth.

She swatted him away. “Yeah, right. You’ve only got ten minutes to spare and you’ve never been late a day in your life. Go on,” she scolded, “before I forget myself and get that gorgeous suit of yours dirty.”

He sighed and stole another quick kiss. “To be continued,” he vowed before grabbing his car keys from the counter. “Love you,” he called over his shoulder. “I’ll pick you up at seven.”

“All right,” she returned. “Now get before you make your poor daddy nervous.”

Finally, the house to myself
. Ali loved Monday mornings. No students, no Bobby, nothing but peace and quiet and her own thoughts. She stripped off her filthy clothes and tossed them in the washing machine before padding to the bathroom, her muscles practically screaming in anticipation of a long soak.
Maybe I should cut back on paying students, find someone else to take on the volunteer instruction
.
I’ll help Karen get the program up and running and that will be it. Six months, tops.

But the thought of stopping instruction with any of her students—paying or not—just didn’t sit right with her. Besides, the volunteering was the best part of her job. Most of the kids had really rough lives and the bond they shared with the animals was restorative. For some, their hour or so with the horses was their only opportunity to be kids. How could she take that away from them? The notion of giving it up—not to mention abandoning the new program, which was her brainchild—was unbearable.

The water spluttered wildly when she turned it on, and she reminded herself to get someone to come and fix it for her. When she’d mentioned calling a plumber, Bobby reminded her that she’d only be in that house a little while longer. The new house was almost completed, and in two months—give or take, you never knew with contractors—she’d be leaving the old farmhouse behind. No sense wasting time or money on a quirky little faucet, he had reasoned, especially not in the guest bath. But it was still her house for now, and she wanted the damned faucet fixed.

Ali groaned as she lowered herself into the hot water, trying to imagine stretching out in the giant tub at the new house with their spectacular mountain view from the master bathroom. As luxurious as it was bound to be, it wouldn’t be the same as soaking in this one. All those nights when her parents had been busy with some charity gala or social function to attend, she’d spent the night here in this old house with Gran. She’d been bathed in this very tub, dried with fluffy towels, and tucked into the little bedroom just next door. The house was more than an inheritance from her grandmother. It was the scene of all the happiest moments of her childhood.

Secretly she hoped construction on the new house would hit some snag and she’d be here until October. Fall was the loveliest season on the ranch, when the light looked so beautiful in the barn. September mornings when she took Tiparillo out on the trail there were times she never wanted to come back home. Ali loved it when there was nobody but the two of them in the filtered light of dawn, Tip’s gentle chuffing the only sound except for the birds.

But Bobby was nothing if not goal-oriented, so she knew it was no use daydreaming. Construction would be finished well before the deadline, come hell or high water, and they’d move in. And just a few weeks later— seventy-six days, to be exact—Ali would become Mrs. Robert Dawson, wife of the future governor of Texas.