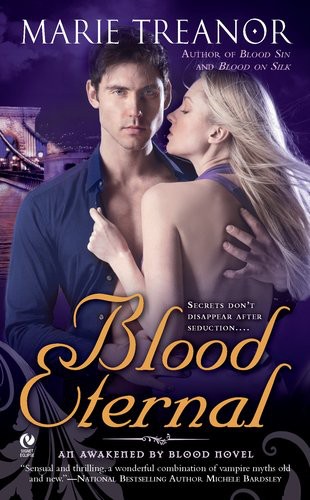 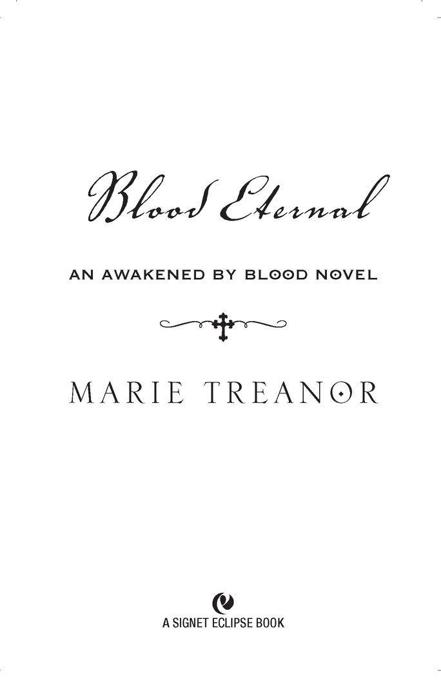 Table of Contents
Title Page
Copyright Page
Epigraph
Chapter One
Chapter Two
Chapter Three
Chapter Four
Chapter Five
Chapter Six
Chapter Seven
Chapter Eight
Chapter Nine
Chapter Ten
Chapter Eleven
Chapter Twelve
Chapter Thirteen
Chapter Fourteen
Chapter Fifteen
Chapter Sixteen
Chapter Seventeen
Chapter Eighteen
Chapter Nineteen
Chapter Twenty
Chapter Twenty-one
ABOUT THE AUTHOR
Teaser chapter
MARIE TREANOR’S
ALSO BY MARIE TREANOR
PRAISE FOR MARIE TREANOR AND HER NOVELS
“Sensual and thrilling, a wonderful combination of vampire myths old and new. You cannot miss this novel!”
—Michele Bardsley, national bestselling author of the Broken Heart series
“Wow! Steamy-hot fantasy, sizzling sex, and a story that makes you think . . . Marie Treanor really packs a lot into these pages.”
—Fallen Angel Reviews
“Prepare to be scorched, alarmed, illuminated, and fired up!”
—TwoLips Reviews
“Witty and sensuous.”
—Romance Reviews Today
“My first impression of this work was
wow
. . . highly recommended read from an author to watch.”
—The Romance Studio
“A very unique fantasy. The passion and heat . . . was Pure Erotic but with a loving passion that made me feel all warm inside.”
—Paranormal Romance Reviews
“A fantastic story . . . superhot sex. I cannot wait for future books.”
—Joyfully Reviewed
“A provocative read . . . witty, sensual, and sometimes dark.... Brimming with complex and compelling characters, sexual tension, danger, betrayal, emotional turmoil . . . this erotic gothic story grabs your attention and holds it right up to the very last page.”
—Romance Junkies
“Funny, sizzling, and tender.”
—Bitten by Books
“Marie Treanor always delivers a book that you’ll be talking about long after reading it.”
—Love Romances and More
“Hauntingly beautiful and entirely sensual.”
—eCataromance
“In a sea of vampire stories, her creation stands out as one of the best. ”
—Brazen Broads Book Bash
“A superbly written story filled with suspense, action, and steamy, passionate encounters.”
—Literary Nymphs
ALSO BY MARIE TREANOR
Blood Sin
Blood on Silk
SIGNET ECLIPSE
Published by New American Library, a division of
Penguin Group (USA) Inc., 375 Hudson Street,
New York, New York 10014, USA
Penguin Group (Canada), 90 Eglinton Avenue East, Suite 700, Toronto,
Ontario M4P 2Y3, Canada (a division of Pearson Penguin Canada Inc.)
Penguin Books Ltd., 80 Strand, London WC2R 0RL, England
Penguin Ireland, 25 St. Stephen’s Green, Dublin 2,
Ireland (a division of Penguin Books Ltd.)
Penguin Group (Australia), 250 Camberwell Road, Camberwell, Victoria 3124,
Australia (a division of Pearson Australia Group Pty. Ltd.)
Penguin Books India Pvt. Ltd., 11 Community Centre, Panchsheel Park,
New Delhi - 110 017, India
Penguin Group (NZ), 67 Apollo Drive, Rosedale, Auckland 0632,
New Zealand (a division of Pearson New Zealand Ltd.)
Penguin Books (South Africa) (Pty.) Ltd., 24 Sturdee Avenue,
Rosebank, Johannesburg 2196, South Africa
Penguin Books Ltd., Registered Offices:
80 Strand, London WC2R 0RL, England
First published by Signet Eclipse, an imprint of New American Library, a division of Penguin Group (USA) Inc.
First Printing, October 2011
Copyright © Marie Treanor, 2011 All rights reserved
SIGNET ECLIPSE and logo are trademarks of Penguin Group (USA) Inc.
Without limiting the rights under copyright reserved above, no part of this publication may be reproduced, stored in or introduced into a retrieval system, or transmitted, in any form, or by any means (electronic, mechanical, photocopying, recording, or otherwise), without the prior written permission of both the copyright owner and the above publisher of this book.
PUBLISHER’S NOTE
This is a work of fiction. Names, characters, places, and incidents either are the product of the author’s imagination or are used fictitiously, and any resemblance to actual persons, living or dead, business establishments, events, or locales is entirely coincidental.
The publisher does not have any control over and does not assume any responsibility for author or third-party Web sites or their content.
The scanning, uploading, and distribution of this book via the Internet or via any other means without the permission of the publisher is illegal and punishable by law. Please purchase only authorized electronic editions, and do not participate in or encourage electronic piracy of copyrighted materials. Your support of the author’s rights is appreciated.
ISBN : 978-1-101-54467-9

To this book’s editor, Jesse Feldman, who took on an unexpected job with grace and kindness! Thank you!

She who stirs the Ancient will end his power and make way for the rebirth of the world, for the dawn of the new vampire age. She will smite his friends and cleave to his enemies, who would end all undead existence. To see the new age, she must give up the world.

—The prophecy of the Ancient vampire Luk, as witnessed by a sixteenth-century vampire hunter
Cast of Characters
The Humans
Cynthia (Cyn) Venolia:
An untrained psychic who senses the presence of the paranormal. Friend of Rudy Meyer, her partner in killing vampires.
Dr. Elizabeth Silk:
The Awakener; descendant of Saloman’s killer, Tsigana; Saloman’s companion. An academic recently awarded her PhD, she accidentally awakened Saloman more than a year ago. Her blood is necessary to Saloman if he’s to reach his full strength.
Senator Grayson Dante:
A powerful U.S. politician and onetime Grand Master of the American Order of Vampire Hunters. Disgraced and replaced as Grand Master following his pursuit of Saloman’s sword and his quest for immortality, which involved kidnapping Dmitriu and Josh Alexander. Elizabeth prevented Saloman from killing him during the rescue at Buda Castle.
Rudolph (Rudy) Meyer:
New Yorker, descendant of Saloman’s killer, Ferenc. Survivor of a vampire attack, he has allied with Cyn to hunt and kill vampires.
The Vampire Hunters
István:
An expert in the science and technology of hunting. A strong hunter; having killed many vampires, he’s absorbed their strength. Member of the Budapest vampire hunter network.
Konrad:
Leader of the first hunter team. Elizabeth’s friend. A descendant of Saloman’s killer, Ferenc, which gives him extra strength. Member of the Budapest vampire hunter network.
Lazar:
Operations manager, supervising the hunter teams. Ex–field hunter. Member of the Budapest vampire hunter network.
Mihaela:
She and Elizabeth formed a close friendship during the original campaign to kill Saloman. Also a veteran hunter with the strength of many kills. Member of the Budapest vampire hunter network.
Miklós:
Librarian and second in command of the Budapest hunters, under the Grand Master of the Hungarian order. Inclined to secrecy and preservation of traditional ways.
Mustafa:
Leader of the Turkish hunters.
The Vampires
Angyalka:
Owns the Angel Club in Budapest.
Dmitriu:
The younger of the two vampires created by Saloman. More powerful than most modern vampires, he’s nevertheless always avoided power struggles and sought a peaceful life among humans. A year ago, he directed Elizabeth Silk to the crypt where she awoke Saloman.
Luk:
Saloman’s cousin, the friend and mentor who turned him into a vampire. He fell into insanity toward the end of his existence, growing jealous of Saloman’s power and of his relationship with the beautiful Tsigana. He then attacked Saloman, who slew him.
Maximilian:
Saloman’s elder creation. After betraying Saloman, he seized power and lost it a century later to the more brutal Zoltán. He lives now in isolation, hidden on an uninhabited Scottish island, from which he emerged a year ago to support Saloman in his battle against an alliance of Zoltán, Elizabeth, and the vampire hunters.
Saloman:
The last of the Ancients. Their race is older than humanity and had the ability to achieve immortality by reviving their dead and drinking living blood. His body was hidden in a Romanian crypt until revived accidentally by Elizabeth Silk a year ago. Having taken his revenge, his remaining ambition is to rule both the human and vampire worlds.
Travis:
Leader of the vampires in North America. Based in New York, he managed to take over the leadership of the whole continent after Elizabeth killed his rival Severin. A recent ally of Saloman’s.
Chapter One
W
hen the earth moved, the vampire Saloman felt a surge of exquisite pleasure almost akin to sexual release. The tension in him snapped, broken by the rush of rare, intoxicating fear.
Dawn approached, and he was too close to the earthquake’s center for safety, too isolated in these Peruvian mountains to be discovered should he become buried under an immovable fall of rock. Already he could hear the thunder of incipient avalanches and landslides drowning out the lesser destruction of man-made edifices, but if he honed his supernatural hearing, he could just about make out the distinctive thuds of collapsing wood and masonry in the distant villages. The sounds of wreckage brought him a certain amount of satisfaction. The villages were already empty of life—he’d seen to that over the past couple of weeks.
ADS
15.4Mb size Format: txt, pdf, ePub

Andrea Pickens - [Lessons in Love 02] by Second Chances
Sparks of Blue (Dark Light Book 2) by Rose Wulf
Till We Meet Again by Judith Krantz
Cormac: The Tale of a Dog Gone Missing by Sonny Brewer
Bound to the Tribe (Bound to the Pack, #2) by Morelle, Sonja
The Journey to the End of the World (Joel Gustafson Stories) by Henning Mankell
Wicked Women by Fay Weldon
Apocalypse Cow by Logan, Michael
Pieces of You by Mary Campisi
Somewhere With You (Windswept Bay Book 2) by Debra Clopton