Blood Legacy: The Story of Ryan 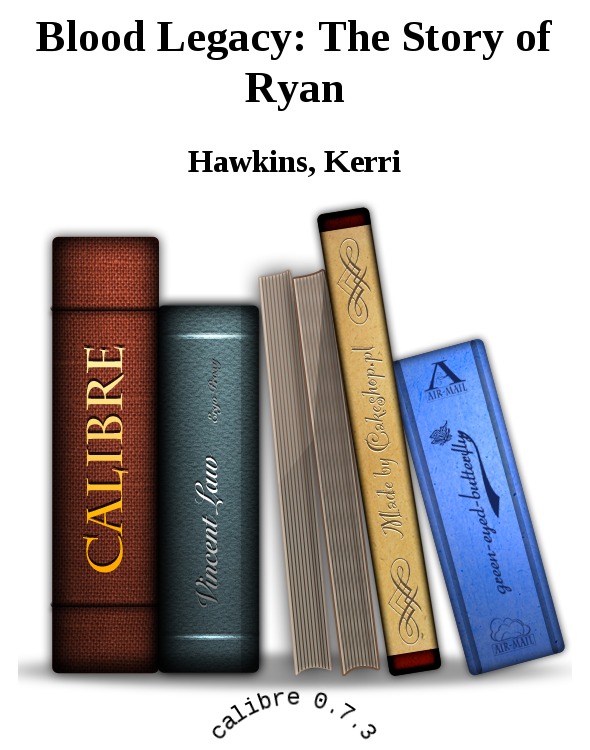 BLOOD LEGACY it’s logo, all related characters and their likenesses are ™ and © 2002 Kerri Hawkins and Top Cow Productions, Inc.

ALL RIGHTS RESERVED. The entire contents of this book are © 2002 Red Raptor Productions, Inc. Any similarities to persons living or dead are purely coincidental. With the exception of artwork used for review purposes, none of the contents of this book may be reprinted in any form without the express written consent of Kerri Hawkins or Red Raptor Productions, Inc.

What did you think of this book? We love to hear from our readers.

Please email us at:
[email protected]

BLOOD LEGACY: THE HOUSE OF ALEXANDER

visit us on the web at

THE LAST BODY FELL TO THE GROUND WITH A THUD as the woman leaned down to turn the gas lever in the fireplace.

The woman stood upright, a lithe and graceful movement considering the severity of her injuries. She glanced around the room, counting a total of 18 bodies, their limbs in various states of contortion, their injuries all more devastating than her own.

She perused the damage in the sudden silence, catching sight of herself in the far mirror. She moved closer, examining the damage to her face with a passive expression. Her hair was so matted with blood it was difficult to discern its true color. Her clothing was so bloodied it appeared a damp black in the dim lighting.

She turned from the mirror, disinterested. Her gaze again swept around the penthouse, searching for any signs of remaining life. The marble steps were stained with blood. The sprawled bodies were grotesquely positioned. The contorted limbs made no movement. Shards of glass impaled chests that no longer rose and fell.

The hiss of the gas seemed loud to her, although in reality it was barely discernible. She could hear the sounds of sirens far off in the distance. She moved to the sliding glass door, then on to the balcony. She stared downward at the black street 24 stories below. She could smell the gas now, seeping into the night air.

She re-entered the penthouse and glanced around, searching for her bag. She saw it on the far side of the room, clutched in the arms of a young man whose head had been removed, none too neatly. She retrieved the bag, showing little compassion for the recently deceased. She removed a small brick of what appeared to be white clay, then gently set it on the table in the center of the room.

The sirens were closer, and the woman returned to the balcony. The smell of gas was powerful now, nearly overwhelming. She removed a bloody but intact case from her shirt pocket. She snapped the case open and removed a small cigar that she lit with practiced ease. With a flick of her wrist, she sent the matchstick flying off the balcony, the flame flickering out as it fell. With startling visual acuity, she tracked the match until it hit the ground, 24 stories below.

The woman puffed on the cigar contentedly a moment, her demeanor in stark contrast to her grievous injuries and the bloody scene behind her. The sirens were only a block away. She removed the cigar from her mouth, gazing at the red tip thoughtfully. With a surprisingly supple move, she stepped up onto the railing of the balcony, balancing effortlessly on the slippery surface. With no regret or hesitation, she flicked the remainder of the cigar into the room behind her, then stepped off the railing into the darkness as the world behind her exploded.

DR. SUSAN RYERSON GAZED THROUGH THE MICROSCOPE, searching for the telltale signs of metastasizing in the biopsy. There were none, and she stepped back to make a notation of this in her records. She leaned forward to make another observation when the phone rang. She reached over, pressed the “speaker” button, then returned to her microscope. She brushed her red hair out of her eyes, peering into the eyepiece.

“Hello?” came the uncertain voice over the phone.

“Oh, hello,” Susan said belatedly, realizing she hadn’t even greeted the other person. Her distraction was evident to the person on the other end of the line.

Susan stood upright, again brushing her red hair out of her blue eyes. “No, Mason, that’s okay. What do you need?”

Mason was still hesitant. “I’ve got something you should see in the basement, might help your resea—”

“Okay,” Susan said, hurriedly cutting him off. She was uncomfortable discussing this with him over the phone. “I’ll be down in a few moments.”

Susan removed her lab coat, smoothing her stylish suit. She was small and slender, but carried herself with self-confidence. Although a mere 34 years old, Susan Ryerson was a well-renowned researcher and full medical doctor.

Renowned or not, Susan thought to herself, the scientific community would not look kindly on her use of human bodies unethically (and illegally) obtained from the county morgue. Susan attempted to rationalize the breach in ethics by telling herself the ends justified the means. She only used bodies that no one claimed and would be unceremoniously disposed of, anyway. The way she saw it, this was a final chance for these people to contribute something with their lives, even if it was only through their deaths.

Susan exited her private lab and used her security code to access the elevator. She stepped into the waiting elevator and leaned against the wall as the car dropped smoothly into the basement. The facility she worked for was a contradiction of sorts. It possessed one of the finest trauma centers in the United States, yet doubled as the county morgue. It fostered some of the most advanced medical research in the world, yet it routinely resembled a war zone. The hospital lost a fortune to patients with no insurance, yet made a fortune through the research and development wing. Patents and contributions were the big moneymakers in this hospital, not patients.

Susan Ryerson possessed four such moneymaking patents. She had discovered a unique drug delivery system, a method of stabilizing glutamine in solution, and two anti-obesity drugs.  She saw little of the monetary returns from her million-dollar patents since her research had been completed under contract with the hospital, but she lived comfortably and was given free reign in her research. It was the latter that gave her impetus to continue.

The doors to the elevator opened and the smell of formaldehyde struck Susan full force, causing her to wrinkle her nose. She moved down the dimly lit hallway into a brightly-lit office. It was empty. A scribbled note on the chalkboard said simply “IN AUTOPSY.”

Susan retraced her steps down the hallway and passed the elevator. She pushed through another set of double doors and the air was noticeably cooler. She lifted the latch on the heavy metal door to the meat locker.

“Meat locker” was not actually the appropriate name for this room. But in typical morgue humor, it was an apt description. Unlike the neatly aligned cubicles seen in film and on television, this room reflected a more accurate reality.

Hundreds of bodies were piled on gurneys and on shelves against the wall. Sometimes three deep, the bodies were enclosed in large, see-through plastic bags. Because of its dual role as hospital morgue and county morgue, most of the people here had died violent deaths, a fact evident by the twisted and contorted limbs pressed against the plastic. Gaping mouths were open in endless silent screams, or perhaps in endless silent snores.

Susan had the odd thought that even the recently dead looked nothing like the living. As she glanced around at the bodies, she thought how fine the line was between life and death. Death was the demon she chased in her research, yet no one had come up with an apt description of what exactly it was that separated these bodies from her.

Susan snorted quietly at her own mental ramblings. She could see herself at the next medical board meeting discussing her new definition of clinical death:

“It’s a lot like obscenity, gentlemen. I can’t define it, but I know it when I see it.”

The formaldehyde smell was stronger in here and Susan couldn’t help but make the connection to her high school science course; these people in their ziploc bags reminded her of giant fetal pigs.

She moved further into the room. To the right were the “crispy critters,” people who had burned to death and who would now literally break into pieces if touched. They had their own unique stench that not even the formaldehyde could completely disguise. They were not of much use to her.

To the left, against the wall, was a set of what appeared to be bookshelves, or perhaps mail cubicles. But upon closer inspection their true purpose was revealed. The soles of tiny little feet could be seen sticking out of the end of the cubicles. Tiny little feet with tiny little toes with tiny little tags on them. This was the only part of the morgue that bothered Susan. It didn’t have a nickname; it was just where they kept the dead babies. She could not use any of the dead infants; it was one breach of ethics she could not force herself to commit.

She moved through another set of doors into a brightly-lit room. The air was warmer in here, and a little more putrid. The bodies had to warm up a little before they could cut on them.

A slender black man leaning over a corpse looked up. His face broke into a sunny smile. “Hey, it’s my favorite doctor. You sounded kind of busy on the phone. You working on something good?”

Susan moved closer to see what he was doing. “No, not really. I’m more in a fact-gathering mode right now.”

Mason set down his instrument and removed one bloody glove. “Oh, then I don’t know if you’ll be interested in what I have for you.”

Susan glanced down at the body on the table, unwilling to leap immediately into their mutual indiscretion. “What are you working on?”

Mason picked up a clipboard. “Hit-and-run. Twenty year-old male. They’re trying to match injuries to mechanism, that sort of thing.”

Susan nodded. Mason was a recognized forensics expert as well as coroner. He replaced his bloody glove and pointed to another nearby gurney. “I think I’ve got another slasher victim. Thirty year-old female. Same type of injuries, same type of death. They need to put that guy away. It’s not good when my business is booming.”

Mason continued his casual conversation as he cut on the body in front of him. Susan watched with only mild interest, glancing around the room. This room always seemed to have a fungal quality to it, although it was spotless. Spotless, she thought, wrinkling her nose slightly. The place may have been sterile, but it would never be clean.

Mason stopped in the middle of what he was doing. “Hey, I’m sure you’ve seen more than a few of these. Let me show you what I’ve got so you can get back to your work. Come over here and take a look at this.”

Mason was already moving across the room and Susan had to walk around the table to follow him. He pulled the sheet back from a gurney against the wall.

“How old do you think she is?”