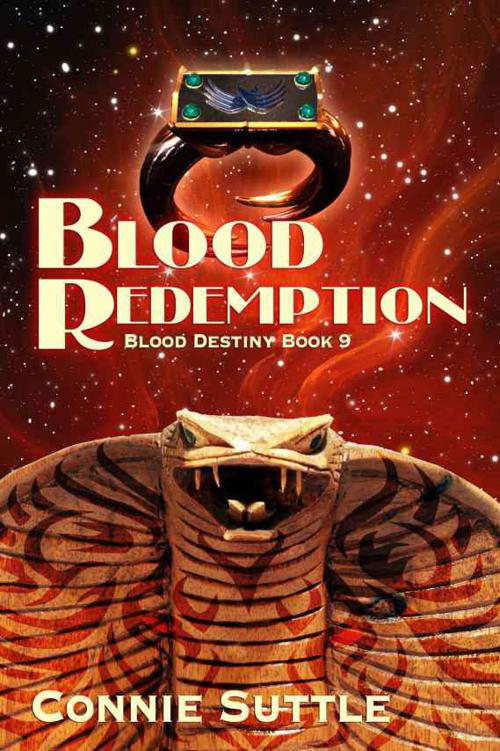 For Walter and Joe, for the usual reasons.

And for Lissa's fans everywhere. Your support means more to me than I can ever say.

This book is a work of fiction. Names, characters and incidents portrayed within its digital pages are purely fictitious and a product of the author's often warped imagination. Any resemblance to actual persons, living or dead, is purely coincidental.

This book, whole or in part, MAY NOT be copied or reproduced by electronic or mechanical means (including photocopying or the implementation of any type of storage or retrieval system) without the express written permission of the author, except where permitted by law.

Other books by Connie Suttle

"Where are you going?" Rabis blinked at the one who stood before him.

"I have to go fishing," the taller one replied. "Somebody has to reel her in." He disappeared in a brief flash of light.

True words. Griffin had succumbed to that siren's call, who knows how many times. "Your father lacks faith," Belen said to me, shortly after I'd come back to myself on Kifirin and found my way back to Earth. Three hundred years had passed since Griffin had taken me away, and I'd found myself on a planet I barely recognized. I hadn't really considered Belen's words—not until now. Belen was right, though; Griffin could only feel assured of an outcome if he pulled the strings himself. He couldn't conceive that things might turn out right at the end if he wasn't involved in some way. And the fact that Belen had blinded Griffin to Wyatt's future meant one thing to me—that something in Wyatt's future might convince Griffin to interfere again.

Looking
is a strange talent to begin with. You can't use it to see everything all at once; you must cast it toward a specific person, event or bit of information. Trying to get everything at once is like using a nuclear bomb to hammer a nail. It's too much, and you can fry your brain that way. Even then,
Looking
into the future of an event or person is tricky business; you must sort through all possible paths the chosen event or individual might take. Kiarra calls those paths
Possibilities
and
Absolutes
. Absolutes are a given—something that is locked in and will not change. Those, however, become fewer the farther into the future you
Look
. Otherwise, you deal with
Possibilities
, simply because of all the people and circumstances involved. All of those things might hold sway on something or someone, sending everything in another (and often unexpected) direction.

Griffin is likely the most adept of the Saa Thalarr at
Looking
, considering the gift of foresight he had from his Elemaiyan mother. Obviously, he is not infallible. Larentii, who also hold the talent, generally find an outcome interesting but they have no desire to interfere. They will observe until the end of time, perhaps mark an event in their minds or record it for their archives, but they will not interfere. I think perhaps something in their past might have brought that lesson home.

Personally, I find
Looking
to be a frightening concept. Why
Look
to see if something terrible is coming when you are sworn not to interfere? You either drive yourself insane with worry or begin to think of ways to skirt the interference rules. When I am humanoid, my emotions play a part in that. When I am corporeal, I am allowed to protect myself and those around me—with the skills I have. Unless one of The Mighty comes and directs my actions, that is. So far, I'd only met one of them, and the power he holds is frightening. The Mighty Hand prefers to direct those beneath him, rather than expend a great deal of power himself. I hope I learn the reason for that, someday.

I am thankful too, that Connegar taught me how to form shields early in our relationship. I can do that while I am corporeal, by pulling a portion of the power I hold to create protection—not just for me but for those around me. The rules of noninterference bind me when I am energy, and I stand to lose everything I have gained if I go too far and affect the timeline. When I am corporeal, I will use everything at my disposal to protect myself and those I care for. Shields are now just another weapon in my arsenal.

I considered remaining energy, too, after the debacle at Conclave. How much easier would it be if I allowed my body to die? Why become corporeal again, choosing to slip into a solid body filled to the brim with emotions and pain? When I began thinking those thoughts, that's when The Mighty Hand showed up. Again.

Franklin's soft snore welcomed me back to my body. Yeah, what a thing to come back to, I know. It had taken some nudging from The Mighty Hand (and then yelling, followed by astonishingly creative cursing) but I'd been convinced to come back. Franklin snored again. It wasn't a loud snore, even by vampire standards. When my eyes unglued enough so I could open them, I found myself staring at the ceiling. Not a familiar ceiling, either. I couldn't recall being in this particular room, before. The other thing I noticed was the IV line in my hand and a bag of blood hooked up to feed me. Frank (still snoring softly) was sleeping on a chair in a corner.

"Frank, honey, why don't you go to bed?" I tried to keep my voice soft, but it sounded like sandpaper used one time too many on a particularly rough piece of wood. Three weeks—that's how long my spirit had been separated from my body. I knew that in just a few more days, if I hadn't come back, Kifirin had plans to pull the plug on corporeal Lissa. That would leave only spirit Lissa. As much as I might think that would be an improvement at times, I still had some things to do before I left this body behind.

The Mighty Hand reminded me of that when he'd found me flying through the universes. I ignored him at first. That's when he started yelling. After telling him to keep his pants on (that was a joke, we were both energy) he managed to convince me that I was being selfish.

Frank jerked awake at the sound of my voice, and he was at my elbow in a blink.

"Honey, you need to slow down; it's not an emergency," I told him. My voice was slightly better, that time.

Frank has Merrill's piercing blue eyes and jet-black hair, now, just like his fraternal twin, Jeff. They're both healers for the Saa Thalarr, although Franklin has an Engineering degree this time around. His bright-blue eyes were staring at me in surprise as he ran his hands over me, checking for anything that might still be wrong.

"Sometimes I miss how the old Franklin looked," I tried to pat his hand with mine, but it held the IV and the transfusion lines, so Frank just smiled and put my hand back on the bed.

"Hungry. Does anybody have potato chips?" My request made him laugh. It was night, I knew that much without
Looking
—I don't think you'll ever catch a vampire not knowing whether it's day or night. "Where am I?" That question was the one I really wanted answered.

"Gryphon Hall, little sister," Frank brushed hair away from my forehead. "Adam's ancestral manor. You don't recognize it because you've never seen any of the guest rooms." He ducked his head and a sigh escaped his lips. "We were just about to lose hope."

"I thought about not coming back," I told him truthfully.

"Lissa, don't make my heart stop," Franklin said, frowning at me. "I still have flashbacks of seeing your blackened body floating in a bathtub. I know how I felt then and I didn't like it. Life hasn't treated you well at all, little girl, but something has been squeezing my heart for three weeks now, and it's finally beating at a normal rhythm because you're awake and talking."

"I have a question for you," I reached for his hand and captured it, this time. I squeezed his fingers lightly, too.

"What's that?" he smiled again.

"Why wouldn't you and Greg let Merrill turn you? You know—before?"

"Ah. That." Franklin sighed and looked at the wall for a moment.

"It was Griffin, wasn't it?" I already knew the answer; I just wanted him to say it.

"Yeah, it was Griffin. I knew he saw things," Frank turned his gaze back to me. "I asked him once what he thought I should do. It took a few minutes to get a reply because his eyes lost focus, just as they do when he's
Looking
into the future or something. 'You can allow the turn,' he studied me with those hazel eyes of his, 'and you'll be a vampire. It won't be too bad, but you have a choice to make, Franklin. You can take the easy way and be a vampire and lead an okay life. Or, you can take the hard path, live out this life and die as you normally would—you and Greg both, and wait for the better life to come. It's your choice, young one. But if you could see what I see at the end of the second path, that is the way you'd go, I think.' He was right, as it turns out."

"It was a hard path, though, wasn't it?" I watched his face. He looked so much like Merrill it was frightening. I didn't see much of Kiarra there at all.

"It was the hardest path, and I almost caved in when Greg died," Franklin muttered, ducking his head again.

"When Karzac says," I saw a shadow of a smile come back to Franklin's face.

"Well, me and my IV stand may take a little trip to the kitchen, then," I grumped.

"Lissa, that may not be a good idea," Frank attempted to talk me out of my kitchen-raiding plans.

"You want me to get in trouble with Karzac, don't you?"

"Well, he'll know you didn't have anything to do with it." I was trying to sit up in bed so I would be partly vertical before taking off.

"Lissa, your body has been practically inert for three weeks—you'll need to build up your strength again," Franklin cautioned. "We've been exercising your arms and legs and turning you during your out-of-body experience, but that's not the same thing."

"You sure know how to take the fun out of everything," I grumped. He was right, though—my arms and elbows were shaking, just from trying to sit up. "Damn," I muttered. "And I wanted something to eat and drink."

The Game Changer: A Novel by Sterling, J.
The Shifter Romances The Writer (Nocturne Falls Book 6) by Kristen Painter
A Night in Acadie by Kate Chopin
Clive Cussler; Craig Dirgo by The Sea Hunters II
The Hooded Hawke by Karen Harper
The Caryatids by Bruce Sterling
Dublinesca by Enrique Vila-Matas
Northern Exposure: Compass Brothers, Book 1 by Mari Carr and Jayne Rylon
Fair Is the Rose by Meagan McKinney
Barely Winging It by Tigertalez