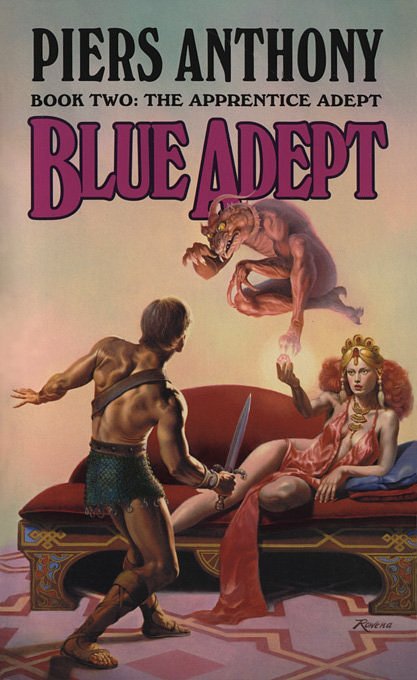 A lone unicorn galloped across the field toward the Blue Castle. It was a male, with a glossy dark blue coat and red socks on his hind feet and a handsomely spiraled horn. As he moved he played a melody through that hollow horn, sounding like a mellow saxophone. The notes floated across the field ahead of him.

Stile walked to a parapet and looked down. He was an extremely small but fit man, a former jockey who remained in shape. He was dressed in a blue shirt and blue jeans, though there were those who felt that neither became his station. His station was such, however, that he could ignore it with impunity—to a degree.

“Clip!” he exclaimed, recognizing the visitor. “Hey, Neysa—your brother’s here!” But Neysa already knew it. Her hearing was better than his. She trotted out of the castle and met Clip at the front gate, crossing horns briefly in greeting. Then the two went into their more extended ritual of reunion, prancing out side by side in unison as they played a duet. Neysa’s horn had the sound of a harmonica, and it blended beautifully with the music of the saxophone.

Stile watched and listened, entranced, and not by magic.

He had always been fond of horses, and he liked unicorns even better. He was of course biased; Neysa was his best friend in this frame. Still—

The two equines intensified the beat, their hooves striking the turf precisely. Now they went into the syncopation of the five-beat gait, the Unicorn Strut, their music matching it. Stile, unable to resist, brought out his good harmonica and matched the tune, tapping the beat with his heel as well as he could. He had a natural flair for music, and had sharpened his skill recently because it related so intimately to his magic. When he played, intangible magic formed around him. But he refused to let that inhibit him; the magic only became tangible when he invoked it in his special fashion.

When the unicorns finished their dance of delight, they trotted back to the castle. As they approached the gate they shifted to human-form, becoming a handsome young man and an elfishly small but also quite pretty woman. Stile hurried down to meet them in the courtyard.

“A greeting. Adept, and a message from the Herd Stallion,” Clip said. He was holding hands with his sister, somewhat to her mute embarrassment; he was more expressive than she. Both wore the garb of archaic Earth as interpreted by nonhuman viewpoint, more or less matching their natural equine colors.

“Thy greeting is welcome. Clip,” Stile said. “And thy message too, be it in peace.”

“It is. Adept. The Stallion is pleased to summon Neysa the Mare this season to be bred.” He paused, then appended his own remark: “At long last.”

“That’s great!” Stile exclaimed. “After three seasons denied, she will finally get her foal!”

Then he saw that Neysa was not reacting with the de-light expected. Stile looked at her with concern. “Dost this not please thee, oath-friend? I thought it was thy fondest ambition to—“ Clip, too, was glancing at her with perplexity. “Sibling, methought I bore great tidings.”

Neysa averted her gaze. She was a well-formed girl an inch or so shorter than Stile—a stature that appealed to him though he knew this was foolish. She was the smallest of mares, barely fourteen hands; any shorter and she would have been classified as a pony: a member of the equine Little Folk. Her human-form merely reflected this, with only the tiny button-hom in her forehead signifying her true nature.

Stile had long since learned to live with the fact that most women and all men were taller than he, and of course Neysa was not human at all. That did not prevent her from being his closest companion in ways both human and equine. Though she could speak, she was not much on verbal communication. Vivacity was not her way, though she had a certain filly humor that manifested subtly on occasion.

Clip and Stile exchanged glances. What did this mean?

“Would a female know?” Clip asked.

Stile nodded. “One would.” He raised his voice only slightly. “Lady.”

In a moment the Lady Blue appeared. She was, as always, garbed in variants of blue: blue corduroy skirt, pale blue blouse, dark blue slippers and star-blue tiara. And, as always, her beauty struck Stile with special force. “Master,” she murmured.

Stile wished she wouldn’t do that. In no way was he her master, and she knew that well. But he was unable to take effective issue with the conventions of this frame—or with the half-subtle reminders she gave him. She considered him to be an imposter in the Blue Demesnes, a necessary evil.

“Lady,” he said, maintaining the formality she required of him. “Our friend Neysa is summoned to be bred by the Herd Stallion, and have her foal at last—yet she seems not pleased. Canst thou fathom this, and wilt thou enlighten us males?”

The Lady Blue went to Neysa and embraced her. No aloofness in this acquaintance! “Friend of mine oath, grant me leave to explain to my lord,” the Lady said to Neysa, and the unicorn-girl nodded.

The Lady faced Stile. “It be a private matter,” she said, and walked sedately from the court.

She hadn’t even asked; she had known intuitively! “I’ll be back,” Stile said, and quickly followed.

When they were alone, they dropped the pretenses.

“What’s the mystery?” Stile snapped. “She’s my best friend —a better friend than thou. Why won’t she tell me?”

“Thy magic is strong,” the Lady replied. “Thy comprehension weak. Left to thine own devices, thou wilt surely come to grief.”

“Agreed,” Stile said easily, though he was not pleased.

“Fortunately I have Hulk and Neysa and thee to look after me. Soon will I eliminate the major threat to my tenure as Adept, and will stand no longer in need of such supervision.”

What irony there was rolled off her without visible effect. The fairness and softness of her appearance concealed the implacable skill with which she fought to pre-serve the works of her late husband. There was nothing soft about her dedication to his memory. “Be that as it may—the mare feels un-free to leave thee at this time.

Hulk may depart and I am not committed to thee as Neysa is. Therefore she prefers to postpone breeding until thou’rt secure.”

“But this is senseless!” he protested. “She must not sacrifice her own welfare for mine! I can offer her only hard-ship and danger.”

“Then thou must talk to her. Make her go to the Stallion.”

“Who is as masculinely logical as thee,” the Lady said.

“With every bit as much comprehension of her concern.

Nay, I shall not betray her thus.”

Stile was immediately sorry. “Lady, I apologize. Well I know thou didst love him alone.”

“Not enough, it seems, to save his life. Perhaps had he had a unicorn to guard him—“ There it was, that needle-sharp acuity.

“I yield the point.

There is no guardian like Neysa. What must I do to oblige her?”

“Thou must arrange postponement of the breeding, until she feels free to leave thee.”

Stile nodded. “That should be feasible. I thank thee, Lady, for thine insight.”

“What thou askest for, thou hast,” she said coolly.

“Thou art now the Blue Adept, the leading magician of the realm. Only have the human wit not to offend the mare in the presentation of thy decision.”

“And how do I find the wit not to offend thee, bride of my defunct self? Thou knowest his tastes are mine.” She left him, not deigning to answer. Stile shrugged and returned to the courtyard. He wanted the Lady Blue more than anything he could imagine, and she was aware of this.

But he had to win her the right way. He had the power to convert her by magic, but he would not use it; she knew this too. She understood him in certain ways better than he understood himself, for she had experienced the love of his other self. She could handle him, and she did so.

Clip and Neysa had reverted to unicorn-form and were grazing on the patch of rich bluegrass maintained beside the fountain for that purpose. The two were a beautifully matched set, his blue against her black, his red socks complementing her white ones. Clip was a true unicorn in coloration; Neysa had been excluded from the herd for some years because her color resembled that of a horse.

Stile still got angry when he thought about that.

Neysa looked up as he approached, black ears perking forward, a stem of grass dangling from her mouth. As with most equines, her chewing stopped when her attention was distracted.

“I regret the necessity,” Stile said briskly. “But I must after all interfere with Neysa’s opportunity. The Blue Adept has, as we know, an anonymous enemy, probably another Adept, who has murdered him once and seeks to do so again. I have no second life to spare. Until I deal with this enemy, I do not feel secure without completely competent protection and guidance. No one can do that as well as the mare. Therefore I must seek a postponement of the Stallion’s imperative until this crisis abates. I realize this works a hardship on Neysa, and is selfish of me—“ Neysa snorted musically, pleased, and not for a moment deceived. She resumed chewing her mouthful. Clip angled his horn at her in askance, but saw that she was satisfied, so kept silent.

One problem had been exchanged for another, however.

It was not any mare’s prerogative to gainsay the Herd Stallion. Stile would have to do that himself, as the Blue Adept. In the informal but rigorous hierarchy of this world, herd-leaders, pack-leaders, tribe-leaders and Adepts were roughly equivalent, though the ultimate power lay with the Adepts. Stile would deal with the Herd Stallion as an equal.

First he had to settle things at the Blue Demesnes. Stile talked with his human bodyguard from the other frame, Hulk. Hulk was as big as Stile was small: a towering mass of muscle, expert in all manner of physical combat but not, despite the assumption of strangers, stupid.

“It is necessary that I leave this castle for a day or so,” Stile told him. “I must negotiate with the unicorn Herd Stallion, and I cannot summon him here.”

“That’s for sure,” Hulk agreed. “He never did have much of a liking for you. Uh, for thee. I’d better go with thee. That unicorn is one tough character.”

“Nay, friend. I am in no danger from the unicorns. It is the Lady Blue I worry about. I wish thee to guard her in mine absence, lest my nameless enemy strike at me through her. Thou hast not magic—at least, thou hast not practiced it; but if no others know I am gone there should be no hostile spells. Against else, thy skills suffice as well as mine.”

Hulk made a gesture of acquiescence. “She is surely worth guarding.”

“Yes. She maintained the Blue Demesnes after her lord, mine alternate self, was murdered. Without her help I could not fill this office of Adept. I have the power of magic, but lack experience. I am reminded daily of this.” Stile smiled wryly, remembering how the Lady Blue had just set him straight about Neysa. “And—“