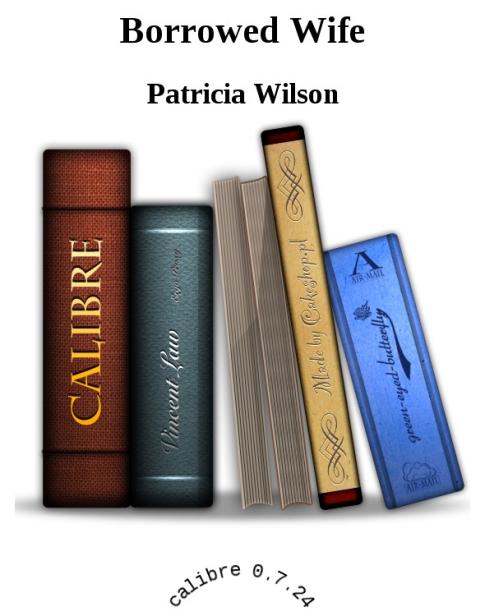 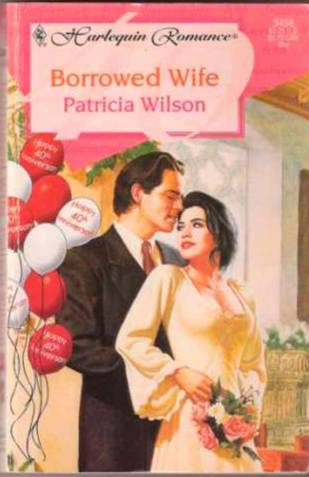 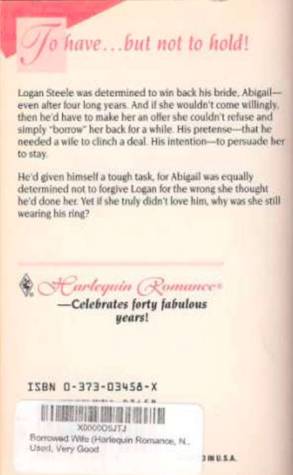 Copyright © I996 by Patricia Wilson. I996
Silhouette Books, a division of Harlequin Enterprises Limited.

Abigail watched with a
frown as her father paced around his study from side to side.  She noticed the
tension in his shoulders, the contorted red colour of the strain on his face.
He was working up to a heart attack and she knew it but there was nothing she
could do about this endless fear. She had seen it eating into him the last four
years.

At first, she thought it
was an exaggeration. Now she knew that his insecurity had strong reasons for
being. The almost superstitious belief that was within his grip, his certainty of
retribution. And now she believed it herself, because nothing would stop Logan. Nothing would halt the juggernaut of destruction that he had turned loose on their
lives. The promise he made to crush, the Madden Corporation was about to be
fulfilled. The vow had been made and it was happening; with the power of his
strength, Logan Steele’s was slowly destroying her father, without mercy,
overwhelming them. It wasn’t ever a clean, sharp kill. The method of
annihilation had been slowly grinding them into oblivion. The suffering had
been insidious and carried out with meticulous precision, planned to detail,
the icily grey eyes of Logan Steele –like some cruel deity controlling a game
of deadly chess. Except that it wasn’t a game. It was her father’s life, the
business he had spent over thirty years building, his very reason for existing.

‘Five years! Five years to
the exact day he threatened me. Kent Madden muttered, stopping to look at her
as she stood by his desk and watched helplessly.

‘The business was
suspended last night. By the end of today we will be liquidated. Loose
everything we have, everything!’

He went
to stand by the window, staring unseeing into the garden of the huge house that
he had built almost twenty years ago. It had been an outward sign of prosperity,
a signal to all the world that he had arrived. The Madden Corporation had been
climbing like a star, shining and new, secure at last after ten yean of bard
work and scheming. Now the house would go with everything else. How long could
they hang onto it? Months? Weeks?

Abigail
sighed and shook her head, the feeling of helpless despair flooding over her
again There had been nothing she could do to shield them against Logan’s cold, ruthless determination. She had merely been a pawn in the game, another
weapon in Logan’s hands as he’d planned her father’s destruction.

Kent
Madden waned to be so bitterly alone. He stood with his back to her but even so
she could see the destruction that the last few years had wrought. The
straight back was bent, the wide shoulders drooping; his hair was almost
completely white. He had tried to fight, tried to win and he had been
accustomed to winning. But there was no way of fighting the ice-cold energy
that was Logan Steele, no way of defeating the wealth and power he commanded.

It would
have been better if her father had simply bowed out long ago but Logan had known be would not. He had known that Kent Madden would fight to the end and he
had slowly forced the breath from the firm, watching the struggle with a
glacial detachment. Now was the time for the kill and he would not even appear
for that; she knew him too well to expect it. He would observe it from his
luxurious office in the towering city block that bore his name. He would watch
it come over the fax. He would tear off the report, crumble it in his long,
strong fingers and it would all be over.

Abigail
looked at her father with dread. What would he do then? How would he recover
from this silent battle to the death? The last few years had almost turned him
into an old man and she knew that when the end came, when the news of the crash
was blazoned across the papers, Kent Maddens life would be finished.

Already
he had handed the office over to her—not in any formal way but simply by not
being there. It was months since he had even set foot in the door. The board
meetings, the daily dealings with each crisis had become Abigail’s problem. He
was too ill to face work. One day at the office would probably kill him.

‘There’ll
be no miracle, Abigail.’ he muttered without turning. ‘Miracles only happen for
Logan Steele. There’s nothing you can do.’

She left
and went out to her car. Her father was still standing by the window but he was
staring into space, never even looking down at her. It would take a miracle to
save them and she knew it. And miracles didn’t happen for Logan. He made them
happen. Logan made everything happen and anyone who stood in his way was hurt.
Who should know that better than she did? She still felt the pain.

‘You’ve got two meetings
this morning, Abigail.’ Martha Bates said as Abigail walked in. ‘This afternoon
you’ve got to see Jenkinson’s manager and the man from the bank. There’s a list
of calls on your desk. The phone never stops ringing.’

‘Are you
surprised?’ Abigail sighed, leaning against Martha’s desk and looking down at
the growing list of appointments.

‘I’m
sorry. Really I am,’ Martha said sympathetically.  She had been Kent’s private secretary for twenty years and she knew that this was the end-everyone knew.
It was not something that could be hidden or glossed over. Abigail smiled
ruefully into the kindly, middle-aged face and nodded.

‘I know.
Thanks. It’s all going to be so much old news soon.’

‘There’s
nothing you can do?’ Martha asked hopefully, and Abigail looked at her wryly.

‘I could
stand and scream, break a few windows. Care to help?’

It was
funny how even at the worst of times people could laugh, Martha thought as she
watched Abigail walk down the long passage to her office. She never ceased to
be delighted by the look of Kent Madden’s daughter. The long, glossy black hair
hadn’t changed since she had come here nearly seven years ago. Nobody deserved
to take the beating she was taking now. She was too young, too beautiful, too
sweet to face this daily battleground. Kent should have been here, fighting it
to the end. Abigail had suffered enough.

The phone
rang and Martha picked it up, her softened expression hardening.

There
will be no statement issued to the Press today,’ she stated starchily, ‘No, the
chairman is not in the offices at the moment.’ She put the phone down angrily.
While she was here she would protect Abigail from vultures. It was the only
help she could give.

With the
door dosed behind her, Abigail sank to the chair by the desk - her desk now,
because if she had not been here there would have been nobody at all in this
office with his name engraved on the outer door. ‘Kent Madden, Chairman.’ The
gold signs were up on other doors too. ‘Vice-Chairman’, ‘General Manager’,
‘Boardroom’

lt was
the last sign that always stuck in her mind because that was where she had
first seen Logan. She had him at that door as he’d been on his way out, five
years ago, when she had been nineteen. Now she felt old, worn out, defeated.
Abigail leaned back and closed her eyes, too dejected even to begin planning
the afternoon’s meetings.

What was
there to plan? Each meeting would have a predictable conclusion. The suppliers
were edgy and anxious. The bank was preparing to pull the rug out from under
the firm’s feet. Their shares had been suspended since last night. End of
story. There was nothing to say, nothing to do. It was over and it was almost a
relief. Logan was just waiting to administer the coup de grace, the final,
glittering strike. It would be a blessing

She looked
down at her hands, at the delicate length of her fingers, and the glitter there
caught her eye. A wedding band-another of his plans, well thought-out and
meticulously executed. She frowned at it, her green eyes narrowed and angry.
She had never taken it off. It had served to remind her of her own stupidity,
to warn her when any other man had tried to charm her.

Why was
there nothing she could do? She was Logan’s wife! It gave her no rights but she
had never expected any. It gave her a voice, though. Abigail picked up the
phone and spoke to Martha firmly.

‘Cancel
all my appointments for the day. I have something to do and it won’t wait.’

‘You can’t do anything,’
Abigail snapped, ‘and neither can I, but I’m going to settle this today. I’m
not going to win but I’m damned if I’ll go down whimpering!’

‘‘Atta girl!’ Martha
chortled. Leave the office to me. Let me know if…

‘It will
be bad news,’ Abigail warned, ‘but at least it will be news. We’ve died slowly
for long enough.’

She left
by the back way, making her way to the taxi rank on the corner. If anyone was
waiting at the front to waylay her they had a long wait ahead of them. What had
she to lose? Pretty soon there would be nothing anyway and she was tired of
struggling in silence. It was like cowering in a corner. This morning she
hadn’t been able to eat. She had left her dinner last night too. She was not
hungry, though. She was slowly shriveling up inside and she was not going to do
that.