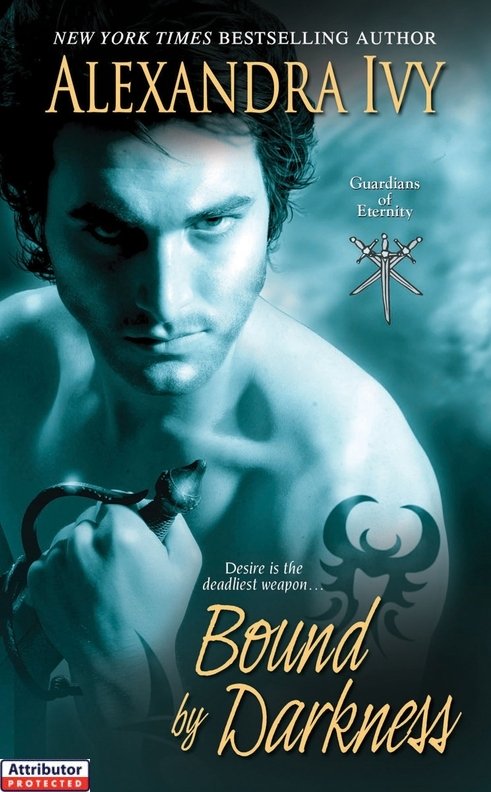 BOUND BY DARKNESS
“Admit the truth. You want me.”
His commanding words were imprisoned against his lips as she once again claimed his mouth in a kiss that demanded capitulation. He was prepared to react to her touch, but the sheer power of it caught him off guard.
God, yes. This was precisely what he'd wanted from the first minute he'd caught sight of this female stalking him.
He pressed her against the mattress, drinking in the cool enticement that was uniquely Jaelyn. And still she was not close enough. He growled deep in his throat as he reached down to grasp her top and with one tug ripped it over her head.
“You're so beautiful,” he whispered in aching tones.
With a whimper, Jaelyn shifted beneath him, wrapping her legs around his hips.
“This is insanity,” she muttered.
He lifted his head to meet her glittering gaze. “Do you want me to stop?”
“Stop and I'll kill you,” she rasped.
“Then tell me what you want, Jaelyn.”
“You.” She trembled as he kissed his way over the curve of her ear. “I want you.”
“Now?”
“Yes ...”
Books by Alexandra Ivy
WHEN DARKNESS COMES
Â
EMBRACE THE DARKNESS
Â
DARKNESS EVERLASTING
Â
DARKNESS REVEALED
Â
DARKNESS UNLEASHED
Â
BEYOND THE DARKNESS
Â
DEVOURED BY DARKNESS
Â
BOUND BY DARKNESS
Â
Â
And don't miss these Guardians of Eternity novellas
Â
TAKEN BY DARKNESS in
YOURS FOR ETERNITY
Â
DARKNESS ETERNAL in
SUPERNATURAL
Â
WHERE DARKNESS LIVES in
THE REAL WEREWIVES OF
VAMPIRE COUNTY
Â
Â
Published by Kensington Publishing Corporation
Bound by Darkness
Guardians
of
Eternity

The Girl Who Was Supposed to Die by April Henry
Renewal 4 - Down on the River by Jf Perkins
Childless: A Novel by James Dobson, Kurt Bruner
Silent Justice by Rayven T. Hill
Two Tall Tails by Sofie Kelly
Chocolate Dreams at the Gingerbread Cafe by Rebecca Raisin
A.L. Jambor by The Tower in the Mist
Damon [The Texas Senator's Sons 1] (Siren Publishing Classic) by Hennessee Andrews
Maurice by E. M. Forster
Azuri Fae by Drummond, India