Read BRAINRUSH 02 - The Enemy of My Enemy Online

BRAINRUSH 02 - The Enemy of My Enemy 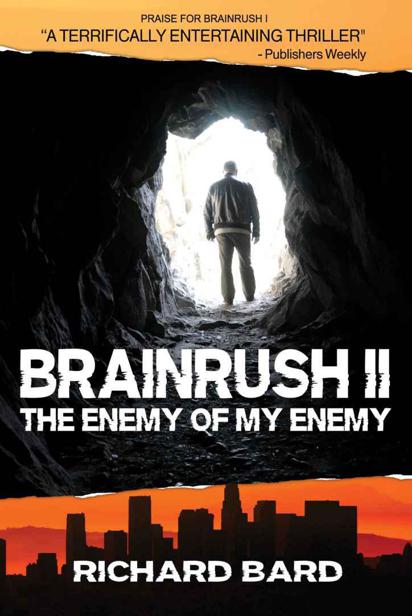 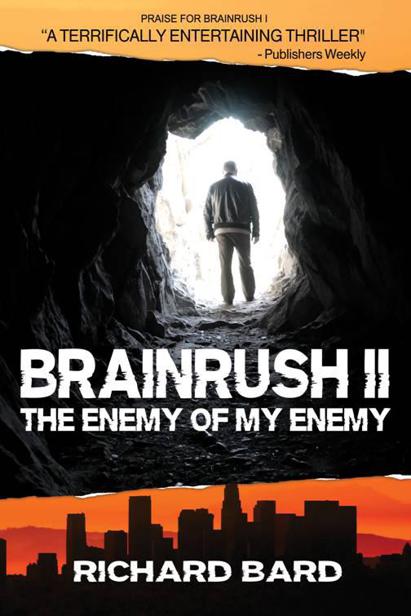 Praise for Brainrush, a Thriller (Book I)

“Brainrush
explores the bonds of friendship while pushing the boundaries of science, creating a compelling, action-packed thriller with a climax that's a knock-out!

“If this startling debut doesn’t have you turning pages at breakneck speed, then you’re not paying attention. Rich characters, crackling dialogue, and a climactic sequence that is stunning, enervating, and innovative all at once. Richard Bard is a voice to be reckoned with.”

“An inventive and compelling hybrid of science fiction, adventure, and political thriller. Rather than end the novel with a simple rescue operation, however, this author provides a far more intriguing and unexpected conclusion.”

“Coming out of something stronger is usually a good thing, but Jake Bronson quickly realizes some things are just as much blessings as they are curses. “Brainrush” follows Jake Bronson as he comes into new cognitive powers, but finds him targeted by both sides of the war on terror, as he embarks on a worldwide journey to save his daughter, and maybe humanity along the way. “Brainrush” is a fine and hard to put down thriller, recommended.”

*Note: As a semifinalist in the 2010 and 2011 Amazon Breakthrough Novel Awards, the unpublished
Brainrush
manuscript received two separate reviews from
Publishers Weekly

The Enemy of My Enemy

This eBook is licensed for your personal enjoyment only. This eBook may not be re-sold or given away to other people. If you would like to share this book with another person, please purchase an additional copy for each recipient. If you’re reading this book and did not purchase it, or it was not purchased for your use only, then please return it and purchase your own copy at any online eBook retailer. Thank you for respecting the hard work of this author.

This book is a work of fiction. The characters, circumstances, and dialogue are drawn from the author’s imagination and should not be construed as real. Any resemblance to actual events or individuals is purely coincidental.

All rights reserved under International and Pan-American Copyright Conventions. By payment of the price of this book, you have been granted the nonexclusive, nontransferable right to access and read the text of this e-book on screen. No part of this text may be reproduced, transmitted, downloaded, decompiled, reverse-engineered, or stored in or introduced into any information storage and retrieval system, in any form or by any means, whether electronic or mechanical, now known or hereinafter invented, without the express written permission of the author.

Discover other titles at

J
ake suspected he was about to sign his own death warrant.

“You want to run that by me again?” he said, hoping to buy a few precious minutes. He edged back on the stick to put the open-cockpit, Pitts Special aerobatic biplane into a shallow climb. Their altitude needed to be at least three thousand feet AGL—above ground level—if he was to have any chance of surviving the desperate maneuver. Using one of the rearview mirrors mounted on the side of the cowling, Jake watched the passenger seated behind him. The man’s image vibrated in harmony with the engine’s RPM.

“You heard me, Mr. Bronson.” The first-time student held up a cigarette pack-sized transmitter that had two protruding toggle switches and a short antenna. He peeled open his jacket to reveal a vest lined with thin panels of plastic explosives. “I throw the switch and…” He paused, his eyes vacant. “Paradise.” His lips curved up in a smile. “I’m ready to meet Allah. Are you?”

The vintage leather helmet that was Jake’s trademark style statement blunted the sound of the wind rushing up and over the windscreen, but the menace in the guy’s tone came through loud and clear on his headset. Jake inched the throttle forward, steepening the climb, passing through twelve hundred feet.

The hawk-faced man in the backseat was in his early twenties. He’d ambled into the flight training school like a young cowboy walking into a Texas bar, wearing boots, hat, and a drawl to match. When he insisted on “the wildest ride ever,” the head flight instructor had turned to Jake with a smile and said, “He’s all yours.” The newbie had been filled with a wide-eyed enthusiasm that Jake found infectious. It reminded him of his own excitement over a decade ago when he’d gone on his first acro flight in a T-37 during USAF pilot training.

But the endearing Southern drawl was gone now and the man allowed his natural Dari accent to accompany his words.

“I’m not a fool, Mr. Bronson,” he said, apparently looking at the altimeter in the rear cockpit. “Regardless of how high you take us, we shall both die. Your fate was sealed four months ago when you blew up my village. Ninety men from my tribe died in the blast. My friends, my brothers.”

Jake grimaced at the reminder. His actions had sparked the explosion that brought the mountain down on the terrorist village. He deeply regretted the loss of life, but given the choices he faced at the time, there’d been no alternative.

The man sat taller in the seat and a rush of pride crept into his voice. “I am Mir Tariq Rahman, and it is profoundly fitting that the enhancements to the brain implant I received—largely as a result of what our scientists learned studying
you
—shall become your undoing. My newfound talents made it so very simple for me to get past airport security and Immigration. I’ve walked freely through your malls and amusement parks, attended baseball games, and eaten popcorn at the movies. I purchased a car and rented an apartment, I infiltrated your decadent society and remained above suspicion while I watched you and those close to you. Planning…dreaming of this moment.”

The revelation jolted Jake. The last of the implant subjects was supposed to be dead. News reports had confirmed it. There had been a desperate shoot-out with US immigration officials as the three
jihadists
attempted to enter the country through Canada. The evidence had been compelling, right down to the implants found in their skulls. The news had come as a blessing since each of those men had deep-seated reasons for wanting to see Jake and his friends dead. At the time, Jake had discounted a gut feeling that it had all seemed too good to be true.

If he lived through the next few minutes, he swore he’d never make that mistake again.

As if reading Jake’s mind, the man said, “You believed we were all dead, yes?”

“I read the reports.”

“Of course.” He sounded amused. “The
sheikh’s
final three subjects, killed at the border. One careless mistake and they are gone. At least that’s what authorities were led to believe.” His tone turned contemplative. “The three martyrs chosen for the deception died with honor. They served a divine purpose under Allah’s plan. As do we all.”

Jake centered the man’s face in the small mirror. It was difficult to judge the expression behind the helmet and goggles, but there was no mistaking the determined clench of the jaw or the satisfied smile. This was a man not just ready to die; he was anxious to die.
Thank God it’s happening up here
, Jake thought,
away from my friends
. He banked the wings westward to angle the plane past the crowded beaches eighteen hundred feet below.

“I wouldn’t turn just yet,” the man said with an unnerving calmness. “There’s something you’re going to want to see first.”

Anxious to keep the guy talking, Jake switched to Dari. “Why should I even listen to you?”  He spoke in a dialect that matched that of his assailant’s tribe. He’d learned to speak the difficult language in less than a week following the freak accident that had transformed his brain into an information sponge. “If I’m going to die anyway, it’s going to be on my terms.” He steepened the bank westward toward the ocean.

“You are more predictable than you are observant, Mr. Bronson.” Tariq held up the device, pointing at the switches. “Aren’t you the least bit interested to learn why there are two toggles?”

Jake tensed. His mind raced through a myriad of possibilities, none of them good. He leveled the wings and edged the throttles forward. He needed to gather as much speed as possible as he continued their steady climb.

Jake checked his instruments. The new heading would take them over the Palos Verdes Peninsula.

Ocean on three sides. That would work.

He complied, adjusting their heading, passing through twenty-two hundred feet.

“Okay,” Jake said. “Tell me about the second switch.” He watched as his passenger leaned over the port edge of the cockpit, as if looking for something down below.

“There!” Tariq pointed to a bend in the shoreline ahead.

Jake banked the aircraft to get a look. It took him only a second to realize he was over Malaga Cove.

Tariq held up the transmitter, his thumb hovering over the second button. “Now it’s your turn to pay.”

Wanted: Mail-Order Mistress by Deborah Hale
Warrior Betrayed: The Sons of the Zodiac 3 by Addison Fox
The Best Time Travel Stories of the 20th Century by Anthology
The Girl Who Walked on Air by Emma Carroll
House of Dark Shadows by Robert Liparulo
A Cold Legacy by Megan Shepherd
Where Darkness Dwells by Glen Krisch
Chasing the King of Hearts (Peirene's Turning Point Series) by Hanna Krall
BLACKWATER:The Mysterious Saga of the Caskey Family by Michael McDowell
Disembodied Bones by C.L. Bevill